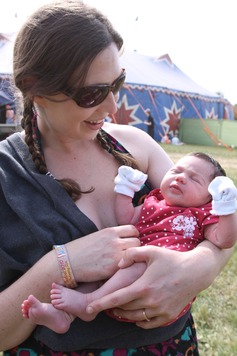 We took a couple of weeks off from work after Arabella was born and headed to Glastonbury Festival with my husband Harry, daughter Constance Avalon, and our new born baby daughter Arabella Leah (not forgetting our 20 odd friends and my dad!).  ‘Mad’ is what most people called us, because I’d had an emergency c-section just 5 days before!

Not had your baby yet? Read our tips on going to festivals while pregnant.

We were featured on the Orange Blog and on Channel 5 as Arabella was the youngest festival goer at Glastonbury in 2010, until Saturday that was, when another crazy mum came back on site after having her baby (Ruben) who was 2 days old…
Let’s hope we see little Ruben in the NCT Tent in the Kidz Field next year and meet his fab folks.  Read her story here.

We went down to Arabella’s Bridge, after all Arabella is named after the famous Arabella Churchill.  We also took Connie’s ‘annual’ photo at the Avalon Field (her middle name is Avalon after the Glastonbury Fields of Avalon – yes, we love Glasto that much that we name our kids after the fields!!!  Next child is due to be called Arcadia or maybe even Trash City!!!!

The whole 5 days Arabella never cried, she just took it all in, slept and fed… she just seemed to kick back and enjoy the energy of the best festival in the world.

I was well looked after by the Radical Midwives in the Healing Fields, who would check my scar and give Arabella her checks.  On our walks though the Greenfields, I was always give a stern warning from Liz (The Greenfields Co-ordinator) to take care and not walk too far.

The sun was hot hot hot, so we would have to get up early to ensure we found shade for the midday sun, this meant we had to miss a few bands, but it also meant we had no other option other than to use time to relax (which was great for me after my operation, and great for baby Arabella too).  So we spent most of our days in the Greenfields under the shade watching the crazy Glasto world go by, chatting and hanging out with our friends, people watching, eating wonderful fresh organic food and drinking healthy smoothies and consuming a fair amount of ice-cream!!!

When it got a bit cooler we’d venture out to see a few bands and have a ‘gentle’ boogie.  We all had an amazing time – the incredible 5 days passed way too quickly, and now I can’t wait until next year. 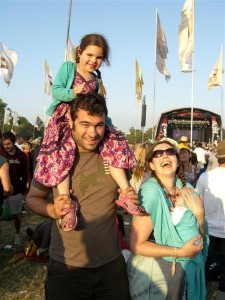 12 thoughts on “We took our New Born Baby to Glasto!”