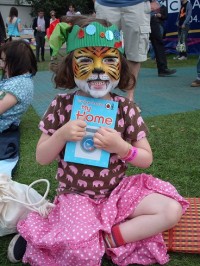 Parent or no parent, it’s hard not to be moved by the story of Ruby Lambert.

Ruby is a little 7 year old girl in rehabilitation following a life-changing brain injury arising from her collapse from a previously-undiagnosed heart disorder at school in April 2010.

Ruby is so full of life and fun.  For three years previous to her heart failure, she had always gone to Leicester’s Summer Sundae festival with her parents.  She absolutely loved it and has been described by the organisers as ‘iconic‘ and ‘capturing the whole spirit of the festival’.  Her story is now to launch Summer Sundae Stories, a project between BBC Radio Leicester and Summer Sundae to capture the experiences of all who share her love of the festival.  You can read the full story on the One4Ruby website.

One4Ruby is the online home of The Ruby Lambert Trust.  The Trust was formed by friends of Ruby and her family, her teachers and medical team in order to support Ruby and children like her to ensure they get the very best treatment and support.  The Trust has been made possible by the generous support of a number of individuals and businesses who have volunteered their time and expertise to form and launch the campaign “This One’s for Ruby”.

Ruby is working hard to relearn all the skills she once took for granted.  She is currenltly quadriplegic, she has no speech and is fed mainly by a tube.

Read, be touched, and consider donating so that Ruby and other children like her can be given the treatment they need.

2 thoughts on “One4Ruby – the heartmelting tale of a festival kid”