Several of my friends’ kids are going to their first festival today. As local festival expert they asked me for advice and information, and I’m always happy to help.

Inevitably it got me thinking about my first festival. It was Reading Festival 1991, I was 17, and there were about 15 of us. Most crammed into an 8 man tent someone had borrowed off his brother, which took us over an hour to put up and didn’t seem to have enough poles. It had a separate groundsheet and didn’t seal up at the sides so one of our group rolled over one night and woke up outside.

There were some great bands on the line up, although I most wanted to see Carter USM, my favourite band at the time. One of my friends knew a group called Blur who were also playing. He had his own little magazine that he printed himself and he had interviewed them. I remember listening to the recording in our sixth form common room and thinking they were the coolest people in the world.

Anyway – the whole thing was a drunken mess. I of course fancied one of our group and pined for him the whole time. The friend I actually wanted to spend time with turned up with a boyfriend and a 2 man tent and I hardly saw her at all. I ended up wandering around alone a lot, mostly to be found in the comedy tent.

I loved comedy back then – Jo Brand, Sean Hughes, Stewart Lee. I remember heckling John Hegley because I thought he was rubbish. If there’s ever any chance of him seeing this – I apologise, it wasn’t my greatest moment. I had wanted to try heckling for a while and I was trying out new things.

Directly after that I tried to light a cigarette off a bonfire and burned off my fringe. Everyone used to burn rubbish in little fires all round the site including inside the main stage field. Security must have been a lot more laid back then. I bought a multi-coloured beret to hide this and wore it for months. I still miss that beret. It was the first time I had ever looked cool.

We all sat out in the main field, smoking and drinking and listening to the bands. One singer was going crazy on the stage, talking nonsense and obviously out of it but still managing an amazing set. He was full of energy and we stopped chatting and started listening. We all agreed this was an incredible band so we checked the programme. Nirvana. One to look out for. Although I never saw them again live.

Blur weren’t even playing the main stage – they were in the second stage in a tent. Back then there were three venues – the main stage, the second much smaller stage and the comedy tent. They were on in the afternoon but there was a decent crowd. Damon Albarn was a superstar even back then. At one point he span round and round and just fell off the stage into the crowd. It was great to be able to get down near the front in those days.

I loved the mosh pit and couldn’t get enough of it. The trick if you were small was to just keep jumping! Quite often men would see the smaller girls like me in the mosh pit and protect us. Not that I needed protecting – but I always appreciated the sentiment!

Carter USM played as the sun went down. I was tiny back then and could see nothing. So a tall guy swept me up and put me on his shoulders. I watched the sunset over the sea of people while listening to my favourite band. True happiness I will never forget.

You never forget your first!

I didn’t own a camera back then so the memories and a T shirt are all I have.

There were no tents left up when we left. Tents were valuable and if one was left it would be quickly picked up by someone lucky! We burned most of the rubbish too so although not ideal, I remember the fields weren’t too bad when we left. Some rubbish but nothing like now.

I bought this T shirt on the way out from a bootlegger (so sorry Reading organisers!). I had a very small budget for the weekend and I felt it couldn’t stretch to an official one. I had lived off a loaf of bread and crisps that I had brought! All of my money had been budgeted for my 3 pints of cider a day. Good times. 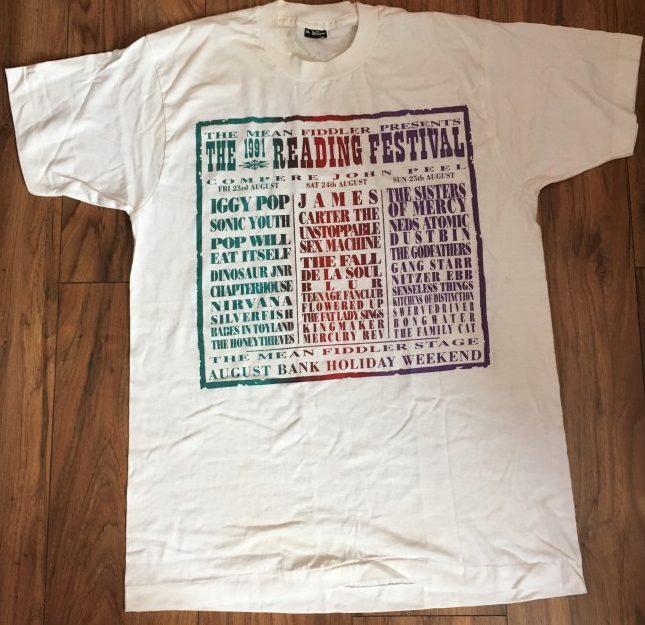 For me, my first festival was a rite of passage. A passing into independence and a taste of freedom. But I didn’t properly fall in love with festivals until the year after, at Glastonbury.

Do you remember your first festival…?