Parent Review: Alive & V-Dubbin
The organisers of Alive & V-Dubbin and although they had spent a considerable amount of time and effort setting up, a lot of their hard work was to be undone! From Thursday midday onwards we were constantly watching the weather forecasts and it was NOT looking good!

Friday morning arrived and we were still undecided as to what to do. The Alive & V-Dubbin team were regularly updating potential visitors as to how things were via FB and email, and a decision was made that campers would still be admitted but that day visitors would not be allowed entry on Friday. The Thursday night had taken its toll and we knew from friends (who were camping there with their trade stand) that during the night gazebos, awnings, tents & fencing had all taken a battering. Decision made – we would instead set off early Saturday morning.

We finally arrived around 10.30 Saturday and were able to drive straight in, no queues! Being that we are members of the Suffolk Bugrs (a friendly Volkswagen owners club) we had already booked to club camp with other members and was directed to where we could set up camp.

Top Tip: We were fortunate enough to be camping with friends who have a 14, 10 & 7 year old. This always helps when camping with kids as they will always keep each other entertained so that you can relax and enjoy sitting back & chilling in a field.

Even if VW’s are not your thing I can guarantee that you won’t be disappointed. If you decide to give Alive & V-Dubbin a visit next year a friendlier group of people you will not meet, but be warned you could catch the VW bug! If you fancy trying out a VW festival before then why not check out Dubs At The Hall or enter the competition on the Festival Kidz competition page for your chance to win tickets.

What was on for kids? Lots for the kids to do including Air Cooled bouncy camper, willow weaving, craft activities, drumming workshops, & a ‘very cool’ (my 4 year old’s words) skate ramp provided by Highline Adventure –  all FREE!  Other activities included Scott King doing live artwork and graffiti workshops. For £5 you could purchase a canvas and take your artwork home with you. 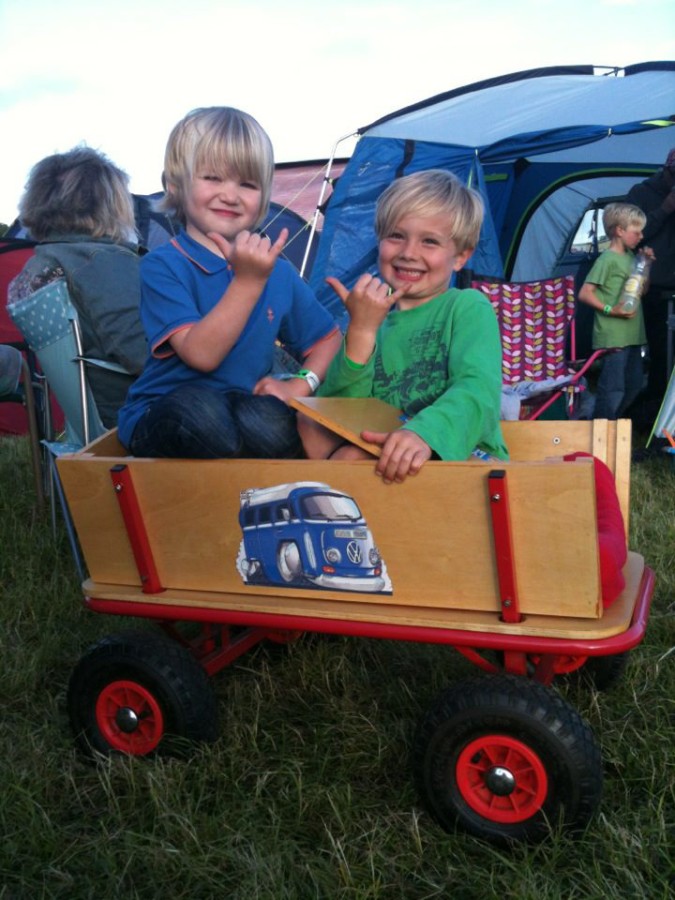 Site and Facilities: Having been to Jimmy’s Farm before in 2010 & 2011 for Harvest at Jimmy’s I knew the site well and the Alive & V-Dubbin team had done a great job of setting up the site. There were more than enough toilets, I didn’t have to queue once and they were kept clean! Phone coverage was good.

Safety and Security: Heard nothing but praise for all those who obviously worked so hard to put on a great family friendly show. There were also mentions of how helpful Regency Security Services were, which is always good to hear.

Most memorable moment: My highlight came on Saturday night. We were treated to a fantastic set by The Downsetters – a 6 piece band from Ipswich playing a mixture of original Interstellar Ska & Luna Reggae songs and a select choice of covers ranging from classic 60’s film tunes, 2 Tone, old school ska & reggae to blistering ska renditions of punk classics. The marquee was jumping but my 4 year old still managed to sleep through it!

The verdict? 9/10 and we will definitely be going again!  The only downside to Alive & V-Dubbin was that we weren’t able to have our planned 2 night stay, but this year the wind had other plans, fingers crossed for 2013!

3 thoughts on “Alive and V-Dubbin”