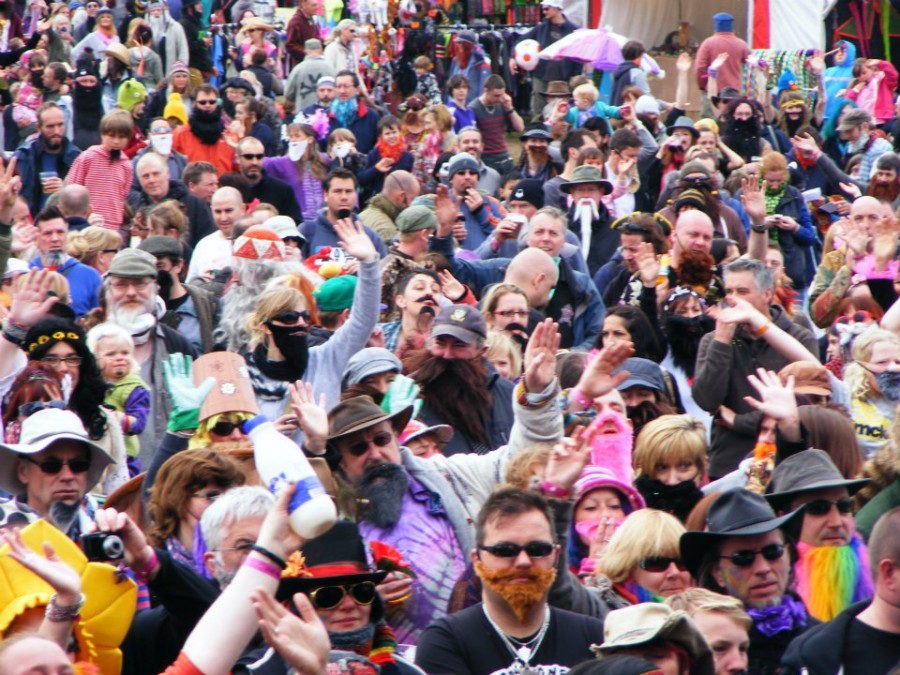 The Bearded Theory Festival is in its fifth year, from humble beginnings it has already built up a good reputation as being a family friendly festival, and has won Best Independent Festival award at the 2011 AIM Music Awards. So we were fairly confident that this was going to be a good weekend. 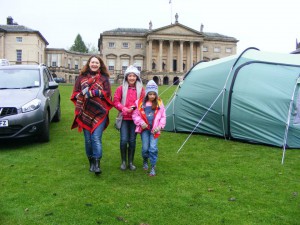 Arriving at the site, you enter through a grandiose gatehouse, as the festival has (incredibly) been allowed to use the park grounds of the beautiful Kedleston Hall (a fantastic National Trust property which has been on various TV programmes and featured in the film The Duchess).

The Camping is split into several areas, all fenced in to reduce potential overflow maintaining some order, Bearded Theory offer campervan, disabled and separate crew camping. We were lucky enough to camp directly in front of the Hall, with this historic backdrop giving us an elevated vantage point across the site.  Even the clouds could not detract from the natural beauty of the site.

All of the stages and facilities are fenced in at Bearded Theory, due to the fact that the site is open to visitors to the Hall.  This restricts the size of the site, but there is very little sound bleed across the tents so there is nothing lost in keeping the site compact. There are two main stages and a dance tent with various smaller stages and busking areas across the site offering a variety of music. The program had a definite folk / punk / rock vibe, with lots of 90s alt-indie favourites on the bill – The Levellers (who had to cancel), Back to the Planet, Chumbawamba, Credit to the Nation, and The Popes amongst others.

Headliners Adam Ant, the ageless Damned and Dreadzone took most of the plaudits but Wheatus‘ opening set on Sunday had the Tornado town tent rocking very early on.

Angel Gardens had a huge area packed full of activities and also offering a very welcome respite for parents who need a break / rest.  There were lots of helpful staff on site and several CRB checked youth workers ensured the safety and engagement of kids of all ages. A lot of the activities required payment to cover the costs of materials (such as the Poi and candle making, zorbing, gyroscope, spin paint) but there was also plenty of free stuff for the kids to get involved in.

Lily & Celeste made candles, poi and stone faces.  They played African drums, practised their circus skills, joined in the cabaret, played games and hula hooped. Dad Mike even made a grass beard head!

We caught up with a lovely Angel Gardens volunteer, Sarah (and the adorable Victor) and Lily and Celeste asked her their burning questions:

Sarah: Yes, this is my 3rd year here with Angel Gardens; we do around 8 festivals per year

Celeste (10): Have you got any interesting stuff for kids?

Sarah: We try to find ideas to make the gardens interesting for everybody, we get interesting people with different skills to volunteer to give us variety

Celeste (10): Which band will be the best for kids to listen to?

Sarah: Depends upon your taste, but Urban Voodoo Machine are great

Lily (6): Why do you think children will like coming here?

Sarah: We always try to get unusual activities that they don’t do at home

Sarah: It’s to break the world record for the most amount of fake (or real) beards in one place; it’s just another fun thing to do

Sunday opened with a daredevil display from her majesty’s display team, The Red Barrows, a death defying and hilarious wheelbarrow display squad, which culminated in a water fight between about 50 kids and the ‘barrows. Next up was Wheatus, opening on the second stage with a festival-rousing finale of Teenage Dirtbag (“We were kept at number two by atomic kitten, Booooo” – Shaun Wheatus) whilst the whole band performed with fake beards. 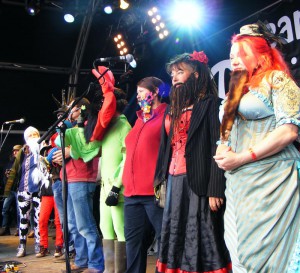 Sunday afternoon the whole festival was encouraged to take part in a Guinness World Record beard attempt which was absolutely hilarious (see pics and video).  A number of special beard wearers were shortlisted for Best Beard, which was ultimately won by 7 month old Mylo (helped by his daddy).

Valiant challenges for the title were also made by a man wearing a beard of bras, a woman sporting a dead ferret, and a lady with a beard made from her own dreadlocks!

So overall, what did the Hogan girls make of the weekend?

Lily (6): “Bearded Theory was good, cool and fun I enjoyed the candle making, storytelling and going backstage with my Dad to see Wheatus sing Teenage Dirtbag. It’s a fun place for kids because there are lots of activities.”

Celeste (10): “It was interesting, funny and exciting, there is a caravan for lost kids where they give you sweets and drinks, lots of activities you don’t do anywhere else, and I really enjoyed the fire show.”

Gaelle (>21 ): “Everyone was really friendly, and all of the staff and helpers were patient and helpful with the kids, which, when it is cold, muddy and everyone is tired was very reassuring. The equestrian display, Red Barrows and beard attempt made a nice change from the usual bands and stalls.”

The Hogan Family’s Verdict:
Bearded Theory is a very friendly, safe and welcoming festival.
Definitely recommended to anyone regardless of age, or musical preference.

Click here for the full collection of Photos & Video from the Hogan Family.

Read another review from our winners of a family ticket here…

Another review worth reading is from Coral Rose, it includes some great photos of the Kids Area: www.coralroseradio.co.uk/bearded-theory-review.php 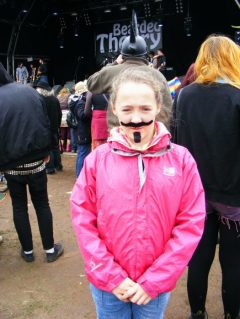 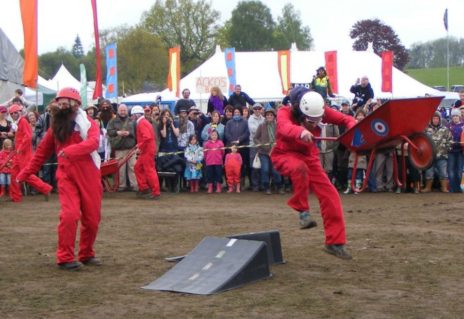 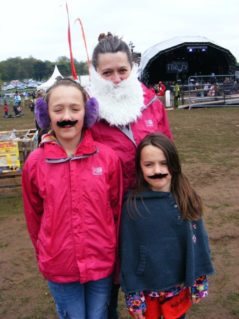 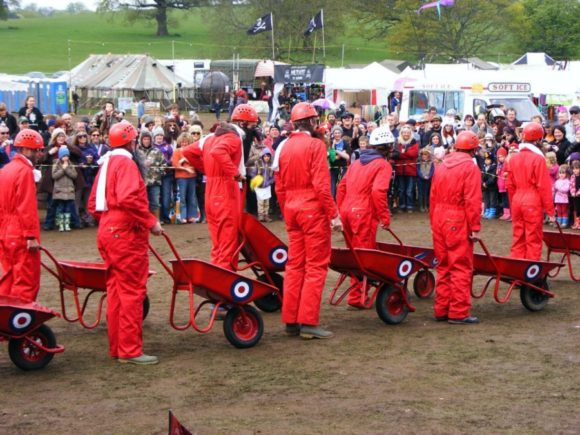 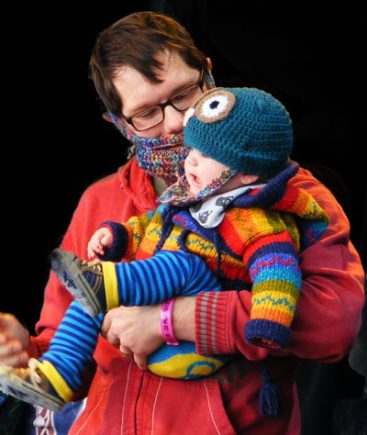 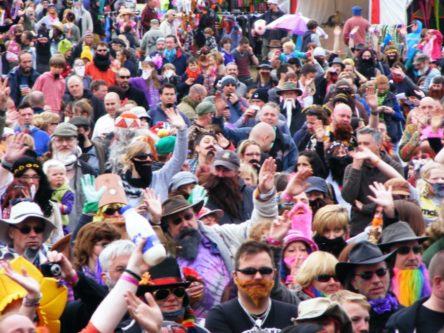 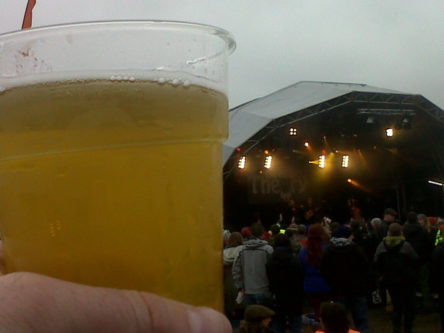 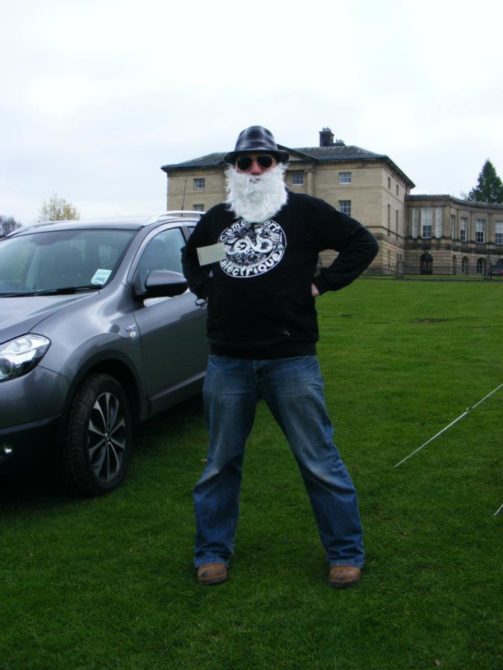 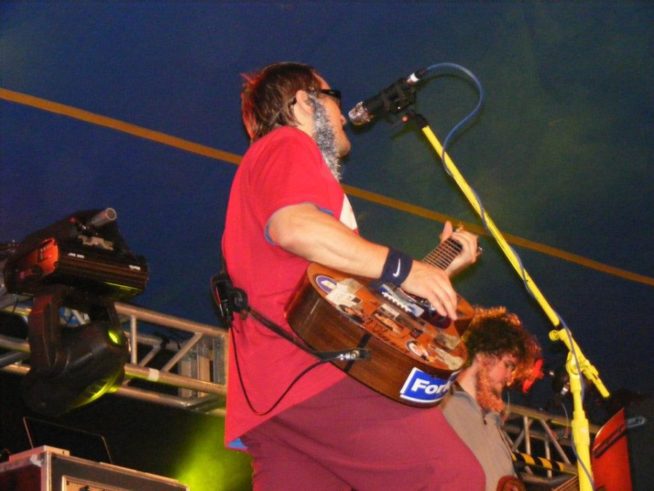 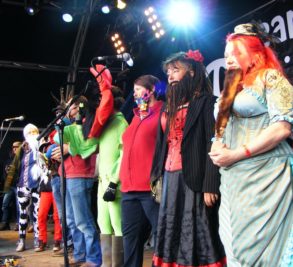 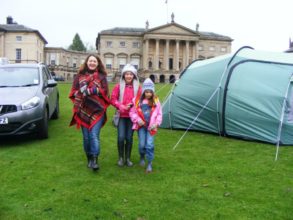 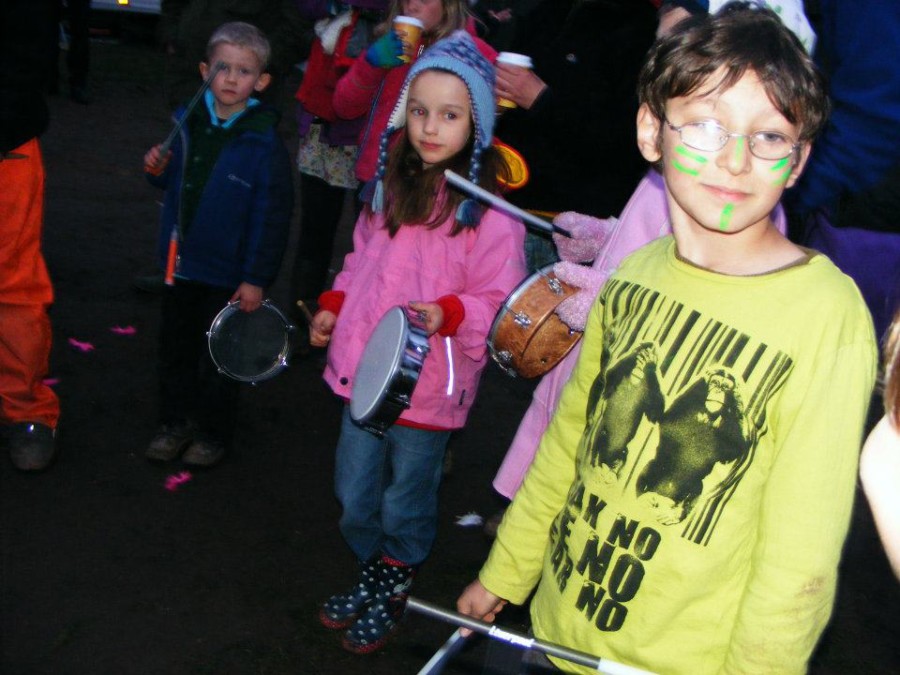 Read another review from our winners of a family ticket:…

We arrived on Friday evening and drove straight into the car parking area, which was already quite full. It took us 15-20 minutes to cart all of our gear across the main arena to get to the camp-site. We trudged right down to the bottom of the camping area and easily found a flat space to pitch in the quiet family area.

There was a good range of different genres of music during the festival, from folk and acoustic to dance and rock – so something to suit all the family. We saw some great bands over the weekend including headliners Adam Ant (replacing the Levellers, who were absent due a fiddle-related injury!) and The Damned. Other notable acts that we particularly enjoyed were Ferocious Dog, Terrorvision and Chumbawamba.

The Angel Gardens kids area looked better than last year too, and offered music workshops, craft activities, theatre and puppet shows plus a baby-care area and even two dedicated kids-only toilets! At 11 and 13 years old, my kids felt they were too grown up to go in though.

What would you change or do to improve the event?

My only criticism of the festival this year (apart from the weather!) was that Wheatus and Mark Chadwick should have been on the main stage, as both drew large crowds which spilt out of the tent.

Take a toilet roll, torch and anti bacterial hand gel for morning and night time trips to the toilets, as the portable loos are unlit and can run short of essential items.
Make sure you take false beards for the fake-beard wearing record attempt!

Despite the rain, the site didn’t get too muddy overall, although some places were a little soft and squidgy…especially near the stand pipes.
Portable loos and water taps were spaced out well throughout the camping areas and arena and were kept fairly clean (that’s if you’re used to festival toilets!). There were showers available too, for a fee, but we didn’t use them.
There was a good range of food outlets, including many which provided vegetarian and vegan options. The onsite shop sold essential groceries such as bread, milk and snacks too. Bar prices were reasonable, although most people (us included) chose to bring our own alcoholic drinks, which we were allowed to bring into the main arena area.

We felt very safe at the festival and were happy to let the kids wander around together, although there was an announcement while we were there, warning us not to leave valuables in our tents as several people had had items stolen.
Security was low key and unobtrusive.

Although we were slightly disappointed that The Levellers weren’t playing, we spotted ‘a beautiful guest’ on the line-up and guessed correctly that Mark Chadwick, The Levellers front man was playing a solo set.
Of course before we left on Sunday, we had to take part in the hilarious fake-beard record breaking attempt, donning our Poundland stick-on beards and moustaches and looking pretty suave. A beard-wearing baby scooped the prize for best beard and won tickets to next year’s festival…aawww!

Submit your own reviews using our simple online form HERE!

Easy to get to and no queues but we were there early. A 10 minute walk to carry stuff to pitch but trolley hire if you needed it. There was a seperate “quiet” camping area at the far end but didn’t get to find it until too late so did have a lot of (inevitable) noise from dance tent. Tents were closely pitched but some good sites on the edges. Good mix of people, mostly friendly, some v loud!

We saw Dr & the Medics who were brilliant, as well as Terrorvision, The Damned and some very excellent less well known bands such as 360. Tornado Town tent was good fun (and dry!) and we had a wander into the Magical sounds tent a few times. Lots going on at the side lines and loved Porta party. There seemed lots for younger kids, not so much for preteens.

What would you change or do to improve the event?

Umm…being picky…..bigger site for the Waterside stage (bloomin icecream van right in the way!) and better directions for family camping with loos nearer by
Cooking area advertised but didn’t see any!

Go! Turn up early to grab a good pitch and dress up very warm!

Toilets were clean (apart from first thing in the morning when they’d filled up!) Top marks to the crew cleaning and topping up loo rolls. The site was not too big – enough to do but without walking for hours. Seemed really friendly and safe. Plenty of places to eat and if you wandered you could find the odd spare bench to rest legs. Not too muddy considering rain

Did feel safe, crowds ok as not too big a festival and our kids 10 & 12. Policing ok, plenty of wardens wandering around tents… perhaps a friendly word with those shouting abuse on the campsite at 4 in the morning might of helped sleep- but you’ll get that whereever 7000 + people are pitched up! Good first festival for kids and young families

Dr and the Medics and the inflatable dalek bouncing around!

Submit your own reviews using our simple online form HERE!