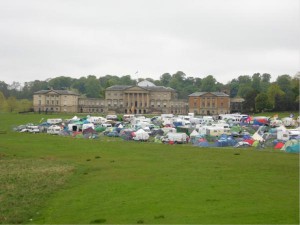 Bearded Theory 2013 was my 2nd ever festival.

Sitting near a river, listening to a waterfall (all very safely fenced off), whilst the kids play under a huge ancient tree, was a million miles away from anything I expected my first Bearded experience to be.

The kids had been so excited to see freely wandering sheep, pheasants, swans and baby ducks feeding on the drive in and walk to camp.  The walk over the stone bridge above the river gave fabulous views of Kedleston Hall to one side, and a lovely island with nature at its best on the other, with the views being even more precious if you wandered back over there when the sun went down.

We were all bubbling with excitement, which had been building for weeks! We chose to camp from Thursday, and once pitched up, we were relaxed and simply couldn’t wait to start exploring.  Bearded Theory had a lovely vibe right from the start, lots of families having a lovely chilled out time, well serviced loos (let’s face it – it’s high up on a parents list!) and all staff were really friendly and knew their stuff.  Security was ample and we felt 100% safe and looked after all weekend.

Food and drink wise you could pretty much get anything you wanted, all reasonably priced too.  £3 for a bacon butty n tea/coffee seemed very popular, we took enough to cater for ourselves as far as possible, but did have a lovely curry and we also loved the pizza.  The Kindred Café in the kids area was well worth a visit, selling lollipops versus a £2.50 ice cream from a van was fab for the kids, they also provided hot water to heat baby milk/food for those that needed it.

It is fair to say that Angel Gardens needs a special mention along with The Bearded Kids Tent.  We met lots of lovely people big and small there, and my 10 & 2 year olds loved it, it had sounded fantastic on reviews I’d read but to be honest was everything I expected and more.  The crew were fantastic with kids, they made time for each and every one of them, and lots of kids learned circus skill talents that had us adults gobsmacked. 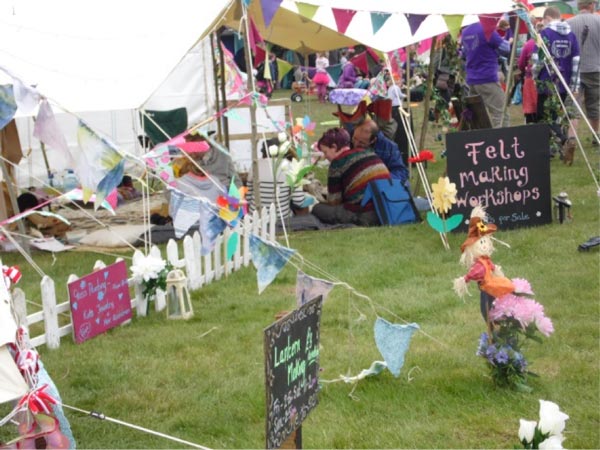 All ages were catered for, from dressing up and messy play to sensory and sound, an array of craft workshops, silly games and a kids vs staff tournament which my eldest thought was great fun. 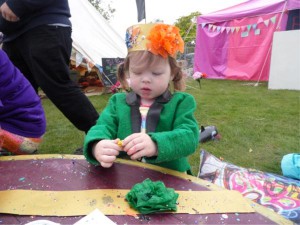 There was also face painting, hair braiding, felt making workshops (which was not something that caught my attention but my eldest loved this and she made a fantastic festival headband that we will keep forever), yoga for all ages, nail painting and a fantastic nightly fire show which wasn’t to be missed!  There was also so much more going on that we didn’t take part in!

Highlights for us parents were The Levellers, The Farm & Seth Lakeman.  There were at least 5 stages of entertainment going on and we kind of wandered and stopped if something caught our attention.  We watched the Red Barrows (spoof red arrows show, on the ground) which was a real laugh, and after that were quite happy wandering around the many stalls selling all sorts of stuff that is just nice to look at even if you don’t buy.  There was some fab fancy dress going on, and we also spent some time around the small funfair which the girls loved, and £1.50 a ride wasn’t too much to pay.

By Sunday morning we were still in full festival swing and the sun was shining upon us.  Sitting in a field with lovely vibes and the sun on your face, perfect!  The girls spent some time chasing giant bubbles, and also took part in the Angel’s talent contest.  They also roped me into singing, which was slightly embarrassing but fantastic fun in the end, and we were given some lovely prizes which was also a nice little touch, as quite frankly I was chronic.  We had an absolute blast at the cheesy disco that night, and played with glow sticks, neon face paint and also had a hay fight – and that was just the adults! 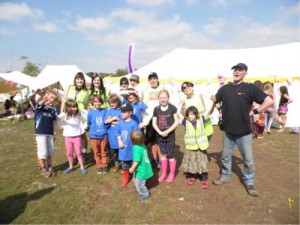 Come Monday morning we were all shattered (with bits of hay still stuck to us…), but smiling and couldn’t wait to fall into our own beds.  As we waved goodbye to the friends we’d made and a sea of coloured flags we were already discussing next year.

This is a little gem of a festival and we will definitely be returning in 2014!

This was my daughter’s third festival, but first Bearded Theory. I’ve taken her to Camp Bestival last 2 years.

Decided to do BT this year due to finances and we couldn’t make CB this year.  Plus loads of my friends have been to BT and said it was ace. Although it was just me and my daughter, I was camping with a big group of friends so there were plenty of people to keep an eye on her if needed. 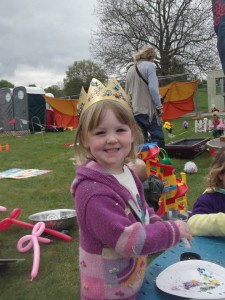 I took my daughter to Angel Gardens every day for her to have fun making things.

She absolutely loved Angel Gardens, or “the play place” as she called it. We also saw Captain Dan there one day who was ace.

I thought the volunteers in there were great, especially as my crown making skills are pretty much non-existent, they helped loads. All very helpful, and the idea of putting the artwork on the tree and getting a round of applause from everyone was great, my daughter loved that!

Unfortunately she isn’t quite old enough to understand the rules of the Shark ‘n’ Fish game, but she will enjoy that next year I’m sure!

My only criticism is I would have liked Angel Gardens and the rest of the main area to be opened earlier in the day. On the Friday we were waiting for it to open pretty much at 10am!

Oh, and have more pink child-size t-shirts on sale as by the time I’d seen them, they’d all gone! 🙂

The festival in general was fantastic for kids. Plenty of toilets around the place, all food reasonably priced and a good selection – I loved the falafel van as they were kind enough to do a plate of salad and olives for £1 for us!

The size of the site is perfect, not too big so she can get lost and plenty big enough for her to run around like a nutter in! 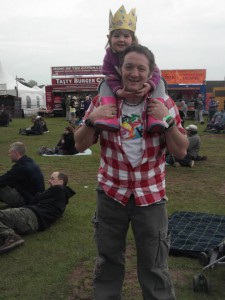 My daughter is my little raver so also loves watching and dancing to the music at the main stage, she especially loved Asian Dub Foundation.

The atmosphere and people in general at BT I thought were always considerate of someone with children, I used a buggy for when she got tired and I never got the impression that people were annoyed with this.

All in all, I think Bearded Theory is a great festival to take children of all ages to, mine enjoyed all aspects of it: Being in “the play place” during the daytime, and at “the main stage” dancing at night time, and generally having fun in the outdoors.

Although if the guys running the Ferris Wheel and other rides could smile sometimes that would be good..!

Review by Nick (and Lara)