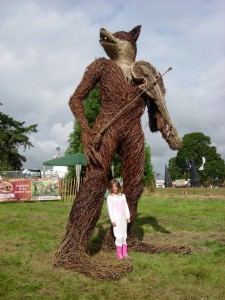 As a Levellers fan I have wanted to go to Beautiful Days for many years, and have heard only good things about it. So maybe my expectations were a bit too high, or maybe the festival has grown a bit too large, as although we enjoyed ourselves we didn’t love it as much as I’d hoped we would. I would value other people’s feedback on whether this year differed to previous years – please do comment below.

Arriving in driving rain is never a good start, but then queuing more than 2 hours to get into the site put us all in a very bad mood. Every steward we met was less than helpful – none of them seemed to know anything at all. We were directed to a car park which was meant to be nearer to the site and were vaguely pointed in the direction of the festival, and told that it was 10 minute walk. Twenty minutes later and much wetter we were still crossing campervan fields without knowing which way to go. We actually found lost crew members and artists wandering around dragging their instruments! Even once we’d finally found the gate (with the help of some people who had been there last year) the stewards on the gate had no idea where family camping was. Or the main stage! For goodness sake will someone please give them a map!

We finally found family camping by asking everyone we met, and some other campers pointed us to the Redwood trees. This was a group of 8 beautiful trees, surrounding a storytelling circle and a wealth of sticks and mud to satisfy even the most bored of children – and we luckily found a spot to camp right next to them. This was undoubtedly the best part of the festival for familes – the storytelling ran from 6-9pm and was superb – and it saved our experience of the festival. We could even hear the main stage from our tent meaning we didn’t have to leave this mini paradise too much! 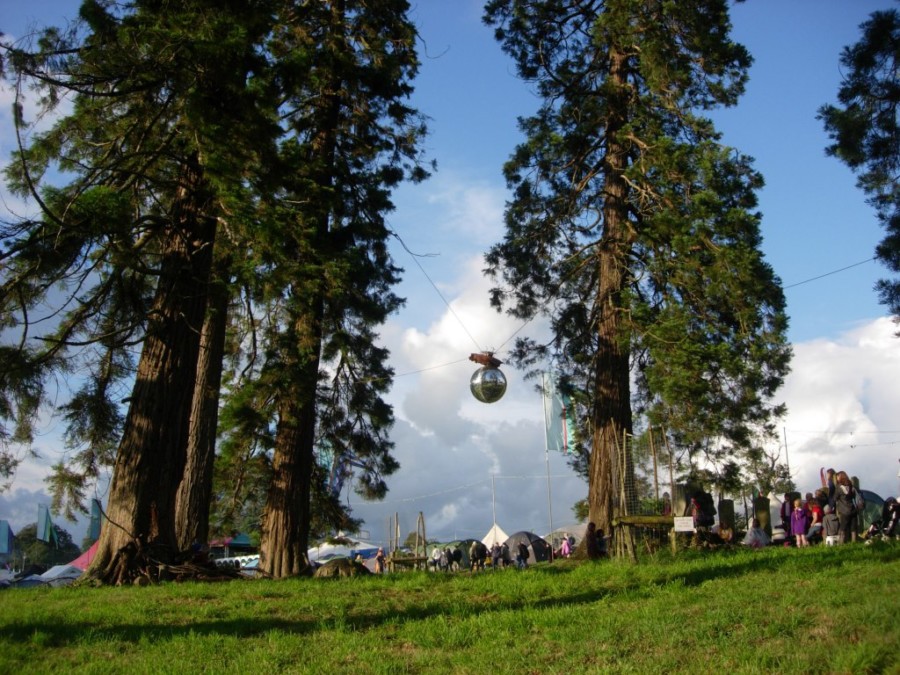 The rain turned the paths around family camping into mud for the whole weekend, but it wasn’t too bad – if it had carried on raining however I think we wouldn’t have been able to get around as some of the paths were quite treacherous. I admit we’d been spoilt this year by spacious small festivals – but Beautiful Days was crowded and busy, meaning you had to queue for everything, even just to get across the site sometimes. The toilets were the blue portable cabin ones, and remained in a fairly good condition for most of the festival, but there was always a long queue resulting in me having to let the little ones go on the grass next to them on several occasions – something I didn’t feel right doing but had no choice. There were children only toilets in the kids’ field which usually also had a long queue – a few more of these would have been great.

The Big Top and some of the smaller stages were extremely difficult to get into with children as they were just too crowded and noisy which was a shame. During The Levellers opening acoustic set we could barely get into the field containing The Big Top never mind get near enough to see anything – I understand they want to stick to tradition but with the increasing numbers I think this needs moving to the main stage to allow more people to see it.

On the other side of the main stage there were several smaller stages such as the Little Big Top and the Bimble Inn – unfortunately you had to go through the main field to get there and they were a long way so we didn’t take the children through. We discovered this wasn’t the best place for our festival wagon – with the mud, steep hills and crowds we would have been better off without it, although with the rain it proved an invaluable place for the children to take shelter. The festival as a whole would have been much better if we’d had children more prepared to walk! It would have been great to have had a shortcut on the other side of family camping to the Bimble Inn, as I was told that this much less busy and more relaxed. Late at night I went over there to see the rest of the festival and there was a massive party going on – it seemed like a fantastic place for the younger crowd. They had huge bubble machines and light shows and was packed full of teenagers having their first festival experiences, a little crazy although it still all felt very safe.

There was an excellent theatre showing children’s shows in the day which the children hugely enjoyed, especially the ‘Rise and Shine’ show at 9.30am every morning which was worth getting up for. There was also a dressing up tent, and one with some art and craft activities, but there didn’t seem to be quite enough to keep the children interested. What they were most interested in was climbing frame in the centre of the children’s area. 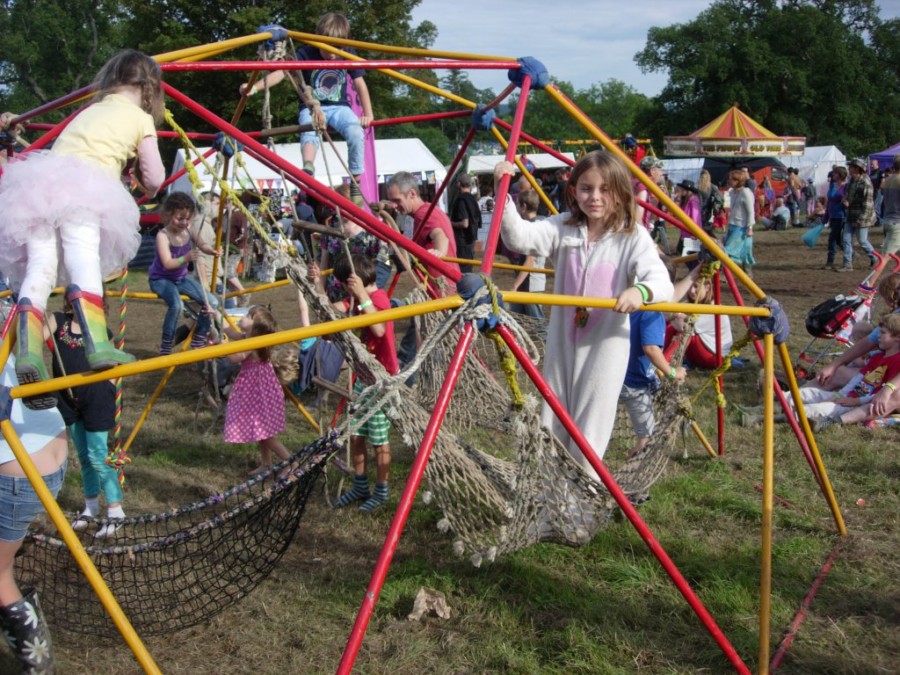 True it was a great little climbing frame but it was so far away from the stages it was no fun for parents, and I felt disappointed that we had driven half way across the country in order to watch our children on a rope swing. Now if only that climbing frame was in the main field so we could watch the live music while they climbed – organisers could you move it please? There was another little children’s area with a few activities and another climbing frame – but again also nowhere near any music which was a shame.

Beautiful Days prides itself in being non-commercial, but unfortunately this was not my experience. The children’s field was surrounded by fairground rides. There was a carousel, a helter skelter, a big wheel, trampolines – all charging £1.50 per ride, and even further away in the younger kids’ area the bouncy castle was charging the same for only 5 minutes. With 3 children and not much else for them to do, we found ourselves constantly giving out money or having to endure their complaints. There was even a balloon stall selling animal balloons for £5 each – most of the children seemed to have one – again I feel that there should have been more they could make for free instead. In contrast, the food and drink were fairly reasonably priced, £5.50 for a gorgeous margarita wood-fired pizza and around £3.60 for a pint of real ale.

The best part of the site was the main stage, which had a steep hill next to it so that you could climb up to get a great view. At the top of the hill were the woodcraft folk. This was such a wonderful part of the festival and actually felt like a real festival unlike the fun fair further down. We spent several hours there, while the children made free pendants out of wood – they were taken to find a piece of wood, then helped to saw a piece off, drill a hole in it for the string and then colour it in a decorate it with beads and feathers. There were also opportunities to make other wooden items for a small donation – Eloise loved the wood carving so much she went on to make a little wooden mushroom too. In other parts of the area they were learning to make fire, baking bread in a wood stove, weaving willow wands and dreamcatchers. In the middle of the area the adults sat around a large fire drinking chai – it was a truly magical part of the festival. 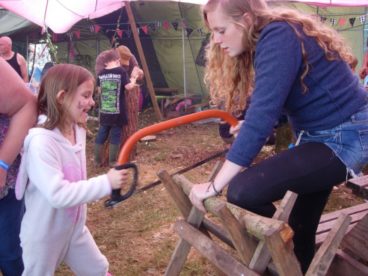 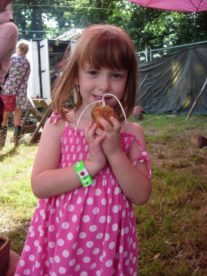 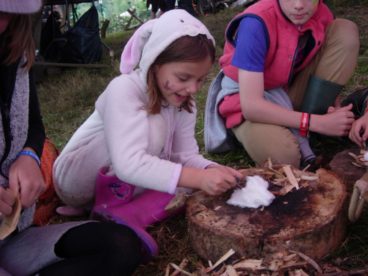 The other stage we spent lots of time at was the Bandstand – a tiny stage which was never busy and always fun. We particularly loved the Lounge Kittens who sang covers of popular songs but in a jazz style. The costume parade was also there which was brilliant and got everyone into the festival spirit. What Beautiful Days needs is more of this sort of thing please!

This is really a festival you go to for the music. We saw Jimmy Cliff and Seasick Steve who were both amazing, and listened to Paul Heaton and Jacqui Abbott doing Beautiful South songs from our tent. The Levellers set was superb, and they held the fire show at the same time so we could watch that and listen to the Levellers in the background. It was an excellent end to a weekend of mixed experiences.

Beautiful Days has a wonderful loyal crowd and sells out every year, and there were plenty of families having a fantastic time there. As we have three children we also find larger festivals very difficult, so this would have affected our personal view of the festival.

However I believe with a few simple changes it could be a truly excellent family festival, it has the makings of one – great music, a friendly crowd, and a gorgeous family camping area.