Review by Ellie Allen and family 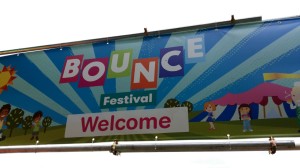 Held at Old Deer Park in Richmond is this little gem of a festival. Slightly different than most, as you won’t find the usual camping field, beer tent or live bands. This festival is totally devoted to the little ones, and instead you’ll find a huge array of delights to keep even the most active child entertained all day.

My family and I eagerly arrived at the gates just before they opened at 10am and luckily for us there were no queues! We anticipated parking problems too but we just rocked up at the car park opposite to the festival and had almost the whole car park to choose from. It was £11.50 for 24 hours, so we were very happy with that, especially being so close to central London.

As soon as we were in, we were greeted by various Bounce staff. They were all wearing Bounce T shirts and were very bubbly and friendly. They showed us what was on and where to sign up to things. It was a nice touch having this extra attention as you don’t normally get that at busier larger festivals.

While the kids excitedly planned their day, checking over the huge billboard timetable of fun events, I was ready for a caffeine hit. I had a quick eyeball swivel round the site expecting a Costa-style stall but couldn’t spot anything. We carried on and I made do with my trusty water.

We headed over to the main stage where TV presenter Anna Williamson was calling people in and getting everyone ready for what was to come. First up, a fab puppet show put on by the wonderful Odd Doll Puppet Theatre, full of songs and surprises suitable for very little ones up to about nine. My eldest is nine and he definitely wanted to stay until the end of the show. Not only are you entertained by the show, you also get to have a full hands-on experience afterwards with a puppet workshop. A great start to the day.

After the excitement of the puppet show, we wandered over to the BMW picnic area where they were showcasing the new BMW 2 Series Active Tourer. We took part in a fun game to fill the boot and the kids got a free tub of ice cream and some BMW branded sunglasses for doing so. Perfect! 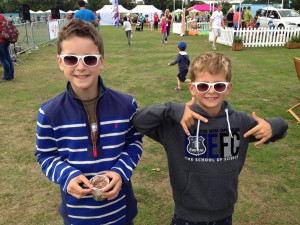 At this point I spotted somewhere to grab a coffee! A snip at £1.50 but the only place selling it, so although I didn’t go back again, I expect they were probably busy later on as the festival filled up. 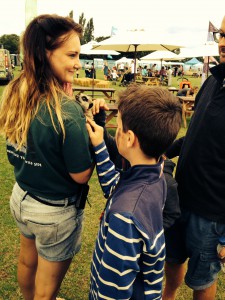 We made our way over to Kimmy’s Mobile Zoo and got in the queue. Even though the queue was quite large, the lovely staff kept everyone entertained while we waited. They came over and introduced us to one of their meercats. They were so cute!

Walking through the zoo was amazing. All the animals had the lids off their boxes, the chameleon wasn’t even in an enclosure, instead, just sitting quite happily on a plant. Our boys especially enjoyed the big tarantula, skunks, sugar gliders and the bearded dragon called Charlie, which my youngest thought was hilarious seeing as he’s also called Charlie. 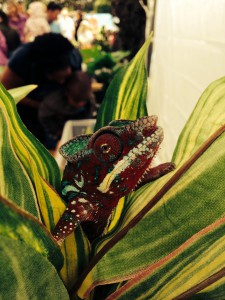 Next we decided to tackle the army assault course. It was right up the boys’ street. They got authentic army camouflage on their cheeks and army instructors shouting and cheering as they ran round. I could tell my husband was also excited although he tried to hide it and acted too cool for school. I took this opportunity to enjoy ten minutes peace while the three of them took off to be soldiers for a while.
I stood in the sun, sipping my coffee and took in the fun atmos. While I was people watching I spotted Nell McAndrew with her family. And although she was on a day off, and casually dressed with her hair loosely up, she looked stunning. If only I could look like that while out ‘on a day off’ with my lively kids in tow. She’s definitely in the yummy mummy club. 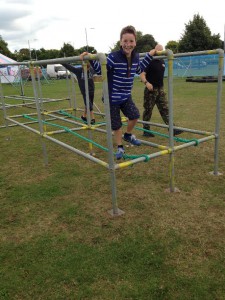 By the time I was joined by my little army cadets and their Dad again, it was gone midday and I was conscious I needed to join a food queue before tummies started to rumble. Usually we’d take a picnic for lunch and eat out for dinner but for some reason today, we decided to eat out for both. There were several food areas to choose from. A mac & cheese van selling pasta, a crepe van selling sweet and savoury crepes, a tabulah stall, a vegetarian stall and a wrap shack which sold chips, burgers and warm filled wraps. My two really wanted chips and some chicken so I joined the queue and waited an hour for our food. An hour! Unfortunately, it was the only place selling chips and by this point the other stalls were busy too. Luckily, there was a craft tent just next to us, so the kids were kept busy but I was rather fed up by the time I got our food.

My mood soon changed after this minor blip to the day when we went to explore the What’s Cooking tent. Nick Coffer, author of My Daddy Cooks was going to cook and experiment with food joined by all the kids from the audience. We grabbed a front row seat and thoroughly enjoyed the show. Both my boys joined the rest of the enthusiastic youngsters and took part in food experiments while Nick made a cake in record time. It was chaos and crazy but the louder it got, the more Nick seemed in his element and it was a fantastic show. I didn’t have his book before, so it’s now firmly on my shopping list. 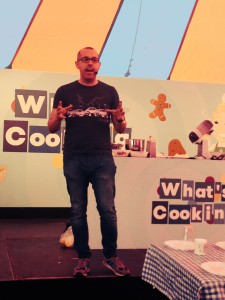 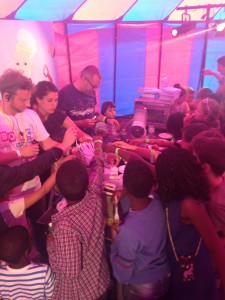 Up next and in the same tent was TV’s daredevil scientist, Greg Foot and his live tour through the world of chemistry. His enthusiasm was contagious, he had the crowd gripped to the edge of their seats with explosions and homemade concoctions. Who knew the periodic table could be so interesting. If only my science teacher had been more like Greg when I was at school. 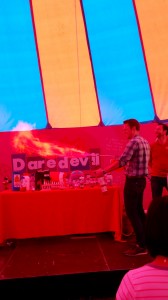 As we left the tent, we could hear some funky tunes coming from somewhere. We followed them and I’m so glad we did. On the main stage, Da Bluez Street Dance Show had just started and they were out of this world. We joined in the workshop after the show and learnt a great street dance routine. Dancing and singing away with a tent full of other parents and their kids was great and I’d have quite happily stayed there all afternoon. My boys are still performing the routine to me even now! 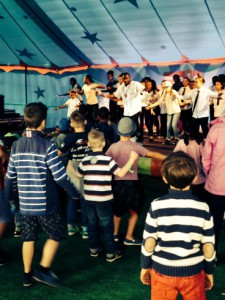 For a relatively small festival, it was crammed with non-stop entertainment for kids. We made rocket launchers and fake wounds (boys are gross) in the Science Museum tent, danced along to the local kids radio station and watched Peppa and George greeting their many adoring fans. We were all happy and worn out by the end of the day. The Bounce team at the exit handed us free drinks as we left (nice touch) and wished us farewell. What a lovely bunch.

To end the day, we walked to the town centre and discovered live music on the river where we ended up having our dinner on the roof of a boat! A wonderful day all round. Thanks Bounce and thanks Richmond, we’ll be back next year for sure! 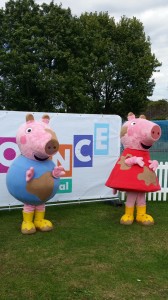