Blissfields (or ‘the one with the hammocks’ as my eldest calls it) secured its place in our festival calendar last year, with its perfect blend of great music and small friendly vibe. This year it did not disappoint, improving on its facilities and offering even more for families.

Family camping had moved this year and was situated around a tiny grove of trees which meant there was somewhere for the children to play. We also happened to be camping near some families we had met last year which was lovely. The only complaint we heard from families was that family camping had been moved right next to the main stage, which meant that night time was incredibly noisy. It’s essential to take ear defenders and ear plugs to Blissfields! There was an option to camp outside the main field so those wanting quiet could do that – most of us agreed we’d rather be in the central area and live with the noise – we were at a festival after all!

The organisers had listened to our feedback from last year and provided family only toilets, which stayed clean throughout the festival. Even though it’s no longer essential I still recommend buying the ‘posh wash’ passes – flushing loos and hot showers right next to family camping – I don’t normally shower at a festival but there was never a queue so at Blissfields I showered every day!

They started a new initiative this year where people paid a deposit and had this returned for a bag of rubbish. This idea worked very well as the campsite remained spotless throughout the weekend and teenagers were even going round collecting our rubbish to sell!

Angel Gardens had pulled out all the stops this year, and it was one of the best kids’ fields I’d seen at a festival. The variety of workshops and crafts were superb – my children all managed to make quite impressive looking hobby horses and butterflies that they played with all weekend. There was always someone supervising the activities and giving the right amount of assistance for the little ones – fantastic for someone like me with 3 children as I often find craft tables quite stressful as they all want my attention!

We attended a princess party – with a real princess (or so my children believed!). The science show was a big hit, where they all had a chance to see some interesting experiments and make their own slime. When it rained on the Friday afternoon we sheltered in one of the tents and they were doing storytime, which was great for my little ones and so the rain never bothered us at all. My eldest loved the graffiti wall as this was the first time she had a chance to try her hand at the spray paints, and there were plenty of other activities for the older and teenage children. 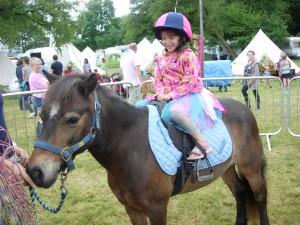 The highlight of the weekend for us had to be the pony rides. My two four year olds had always been too scared to ride a pony before but as we were at a festival without all the usual queues and pressure they had time to get used to the idea. I will never forget the grins of excitement and joy on their faces.

Everything was free in the kids’ field apart from the large games of pop up pirate and kerplunk, which at £1 per person I thought was a bit steep. Thankfully the people running them took pity on me and let us play two games at once but I noticed that the games were largely unplayed through the festival, so maybe they could think about lowering the price for next year.

The kids’ field had been moved away from the main stage this year – several people commented on this to us as it meant that parents could no longer watch the bands while playing with the children. While it’s true that I didn’t see as much of the music this year as a result, I do think it made for a better festival for the children as the music didn’t encroach on the activities such as story time, and it seemed like they had more space this year which gave a lovely area full of children running around after giant bubbles or trying out their circus skills. 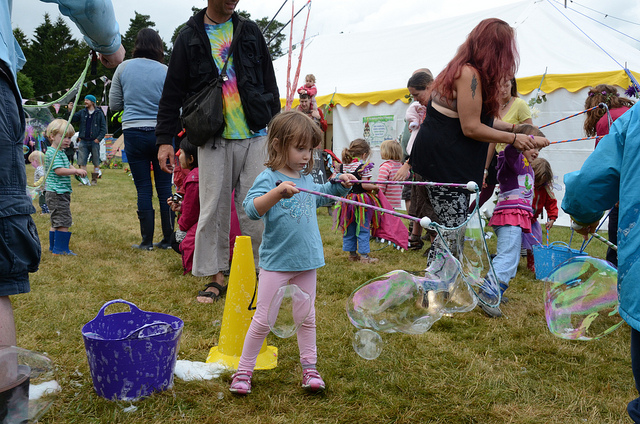 Being a small festival there wasn’t so much choice, but what they had was great quality. The café in the kids’ field served a variety of child friendly foods in small portions – pasta, jackets and sandwiches. The wood fired pizzas we had were some of the best pizzas I have ever eaten – beautiful thin crispy bread with a wonderfully rich tomato sauce. I was told there were also some amazing burritos and Thai food on offer.

The best thing was the Faeryfloss stall – where you could spin your own candyfloss. As it was in the kids field they often spun the floss into the air so the children could chase the sugary web around, trying to grab the sweet sticky strands, which was great fun.

The central area of the festival played host to ‘Animal Antics’ all weekend, and saw children and adults causing much fun and laughter with such silliness as three legged races, egg and spoon and the obligatory water balloon fight. We also beat the world record for most number of people wearing animal print (yes Festival Kidz were there!) which was silly and fun to see all the different costumes.

There were more stages this year and the variety and quality was fantastic. My favourite band from last year, The Dub Pistols, were brilliant as they returned to play to a packed tent on Thursday night – please put them back on the main stage next year! The Blisscoteque pumped out some great dance music throughout the weekend until the early hours, and there was an additional DJ box called ‘The Back of the Bus’ which played crowd pleasers and got everyone up on their feet and dancing. The acoustic tent had been transformed into The Larch and had been moved further from the main stage which was brilliant as there was a serious amount of noise bleed last year and this year we could hear the great folk singer Beans on Toast properly. The Hidden Hedge was a separate area in the trees full of bizarre sculptures, which was where the more serious clubbers could be found – there was a great DJ tent and also a chill out area with a campfire.

The highlight was the headliner 2ManyDJs who gave us a wonderful set and light show. My 7 year old who is usually indifferent to the music at festivals actually said “I like this music!” and jumped around the field to the gorgeous beats.

What else can I say? It seems that Blissfields just keeps getting better and better while retaining its small size and friendly vibe. We love it and will keep going back to meet up with our friendly Blissfields family.

See our festival factsheet for more information on Blissfields.

One thought on “Blissfields 2014 Review”