The family festival that feels like a proper holiday 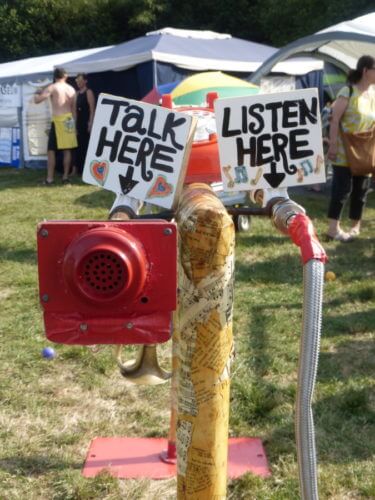 They continued with their winning formula – a laid back festival that’s small enough you don’t have to worry about losing the kids. No queues, only local bands and DJs, wandering performers and an ample amount of activities for children.

And of course a sandpit with a view of the stage!

Chilled in a Field has that special feeling about it that you only get from festival organisers that really love what they do. It’s so friendly and laid back that it feels like a proper holiday. Indeed for us with slightly older children now, we were actually left by ourselves as the festival was small enough for them to go off on their own. 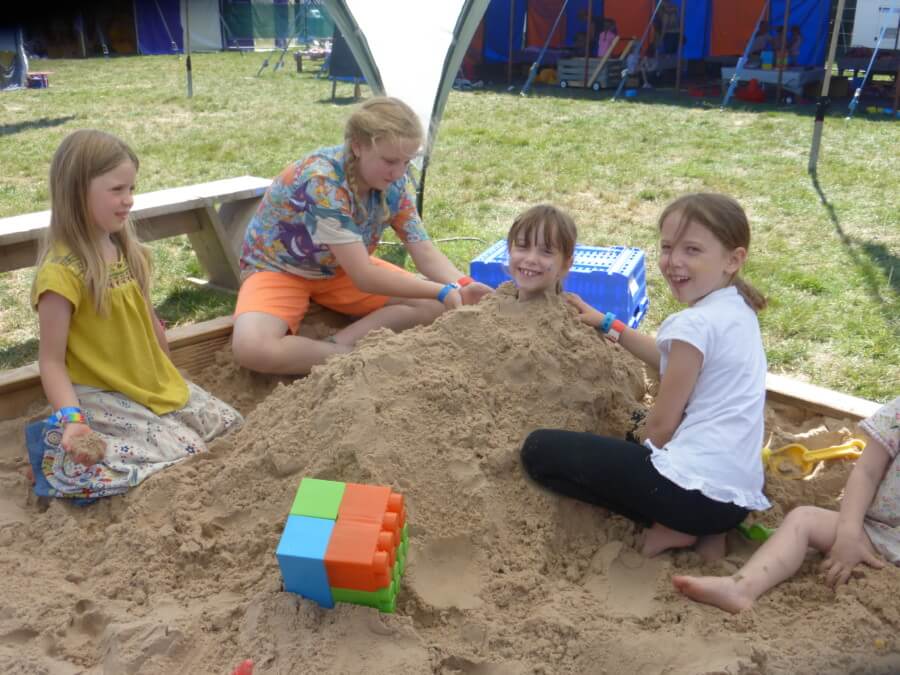 Getting in and setting up

We arrived before the gate opening time, and we were queued up as there had been a problem with the council permit. This meant we had to wait for an hour, although the organisers were amazing, giving out water to the queue and entertaining them with some of the wandering performers.

Camping had been expanded and there was plenty of room in the campervan area. There were also staff camping in the woods – something that the organisers have extended to the festival goers for 2019. If you want to put your campervan in the woods then you will need to snap these tickets up as they are selling quickly! 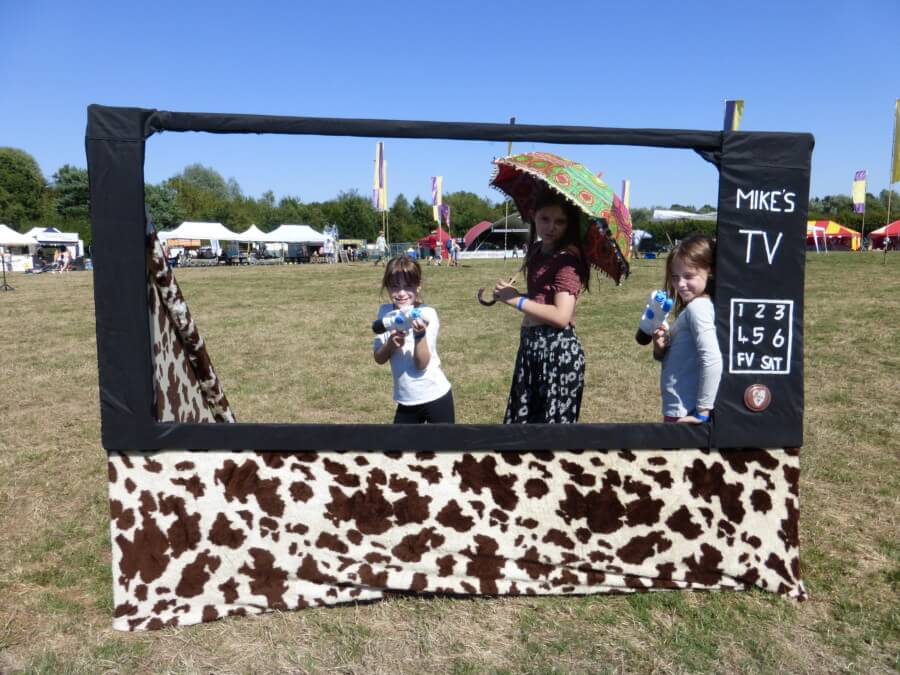 We were in the campervan/caravan field this year, and when we arrived the steward asked if any friends were coming, as they were letting people reserve spaces together. It was a far cry from the usual ‘pack them in’ approach. We asked to be near families and they laughed and said it was mostly families. Several people camped around us were the volunteers and staff. The whole event felt as if it was a big family – many of the organisers and performers seemed to be friends, and everyone was warm and welcoming.

I have to admit the flushing toilet cabins made me quite happy. With three girls it can sometimes get difficult with festival toilets but these were kept very clean. They had sinks for handwashing, and were kept stocked up with soap and paper by cheery stewards. The showers weren’t always working, but there were often times in the afternoon when there wasn’t a queue so you could get a shower fairly easily.

The best food on site was Kaleidoscope Kitchen, selling a variety of different mains at £6-7 as well as fish finger butties and a very tasty traditional Sunday roast. There was also proper fish ‘n’ chips (£8.50) from Olly’s Fish Shack which was very popular, plus some other vegan options. The children loved the pancake stall the most.

There was a shop selling toys, sweets and ice lollies. It also sold water pistols which particularly came in useful over the weekend heat wave.

There were two sections to the festival – the main field and the woodlands. The main field had the main stage on one side and the DJ and bar on the other side, together with all the children’s activity tents. This meant parents could watch the music as well as spend time with the children so everyone was happy. 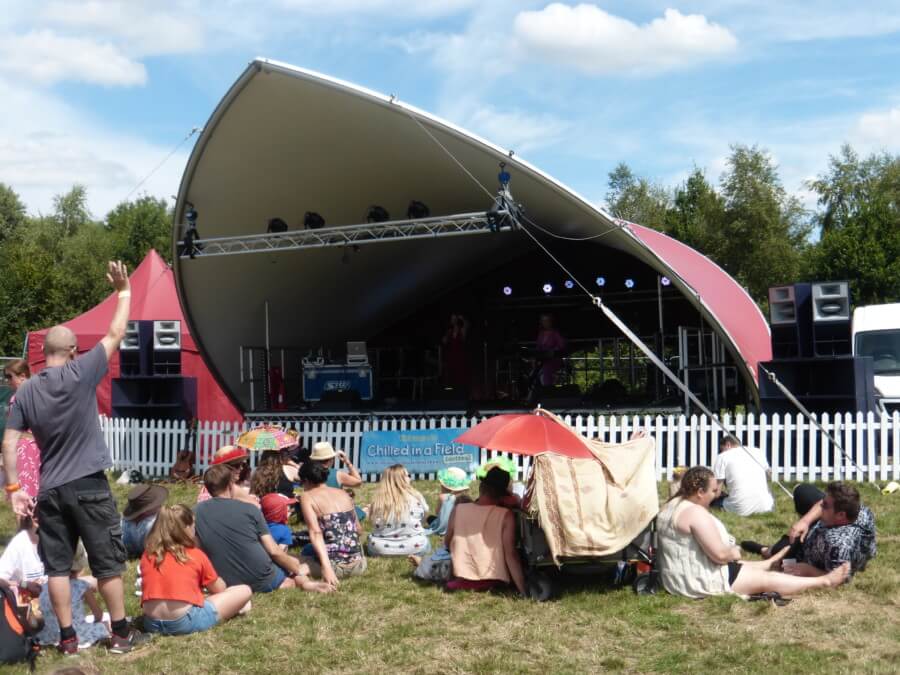 We spent quite a lot of time sitting in the sunshine listening to bands while the children played in the sand pit. We managed some genuinely pleasant relaxing time together as a family.

I especially loved She Drew The Gun who played beautiful protest songs to listen to in the sunshine. The girls particularly enjoyed the family singalong of Disney hits and tunes from the Greatest Showman.

Through the cool shady woods was a paradise of great music, a bar and a huge marble run. The woods were especially popular this year as the weekend was exceptionally hot. 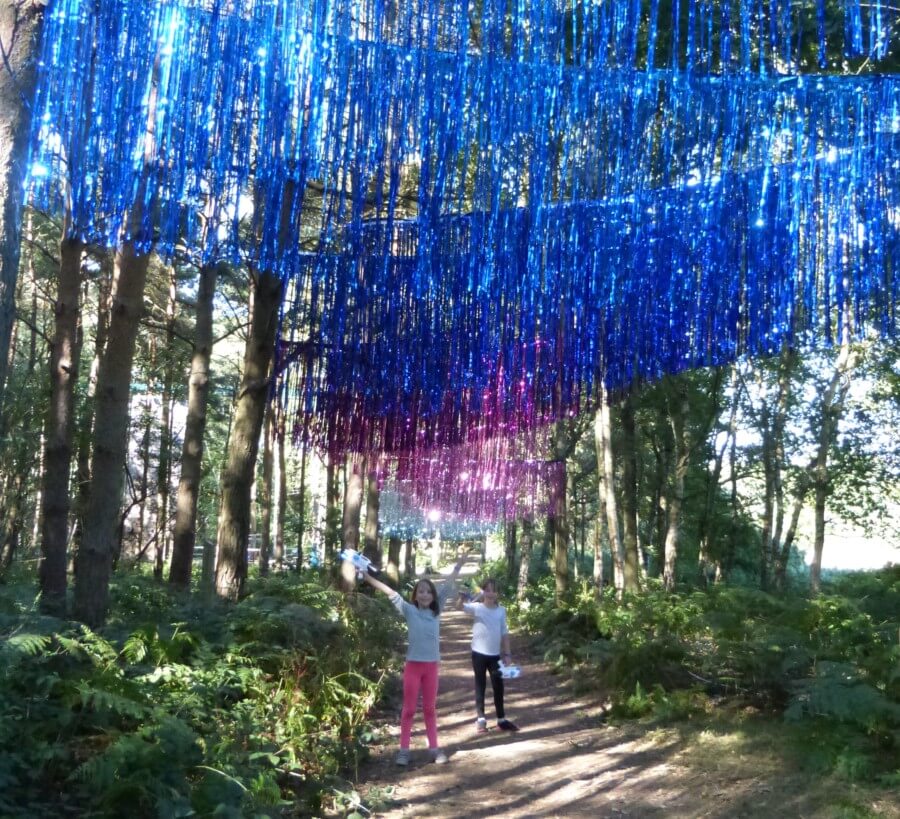 The woods were wonderfully cool, which meant that the woodland stage turned out to be the best place in the festival. DJs were playing old dance classics at times, and the other parents dancing around me were probably the same people who had been there in the 90s too. I even managed to convince my children to dance for a little while with me.

There was a bar in the woods, decorations in the trees, a giant marble maze and arts and crafts to keep the whole family happy.

My children loved the Rhubarb Theatre troop with their very funny mime show Three Suitcases, so much that they insisted on watching it twice! 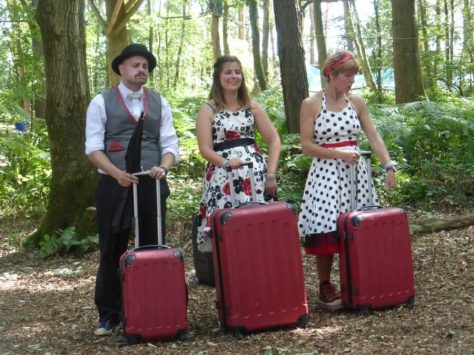 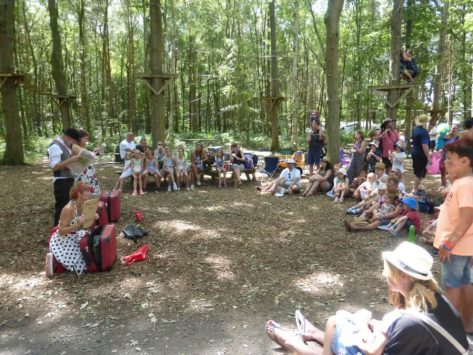 There was even a silent disco in the woods until 2pm on Friday and Saturday nights. I hope to make it there one day but with all the fun and dancing I was ready to go to bed with the children, in a wonderfully quiet campsite.

The Wonderland tent was there again with lots of great activities, from crafting to very silly. We played a lot of jenga, did the pebble painting and enjoyed watching the live hungry hippos. There was also a toddler tent and a teen tent. It was great that the activities changed all day so there was always something new for them to do.

My own children were finally old enough not to be scared of the glitter shower and glitter wrestling, so we all had a go. The children especially loved beating me at glitter wrestling! I couldn’t stop laughing as we rolled around in the glitter until they won by pulling the sock off my foot (yes I had to wrestle all three!). And they found it hilarious that I was head to toe in glitter all day. It was a lovely bit of family bonding. 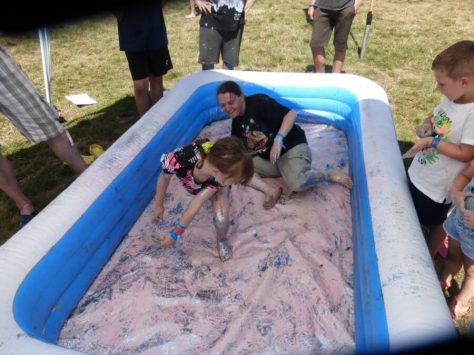 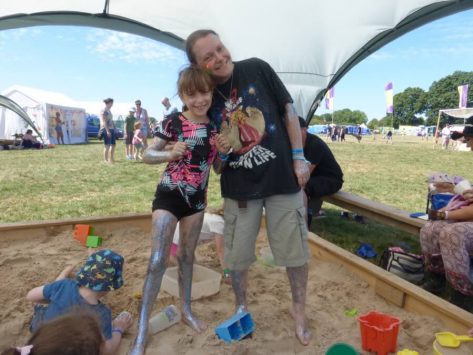 My 11 year old took the opportunity to go off with her newly made friends, and she spent a lot of time in the teenage tent. There was a video games table, which she was on a lot. I would have preferred it to have been a table football table as I like to get the children away from screens when we go to festivals. However it did mean she was around the older children’s activities and she joined in with some of those too – we particularly loved the DJ workshop. 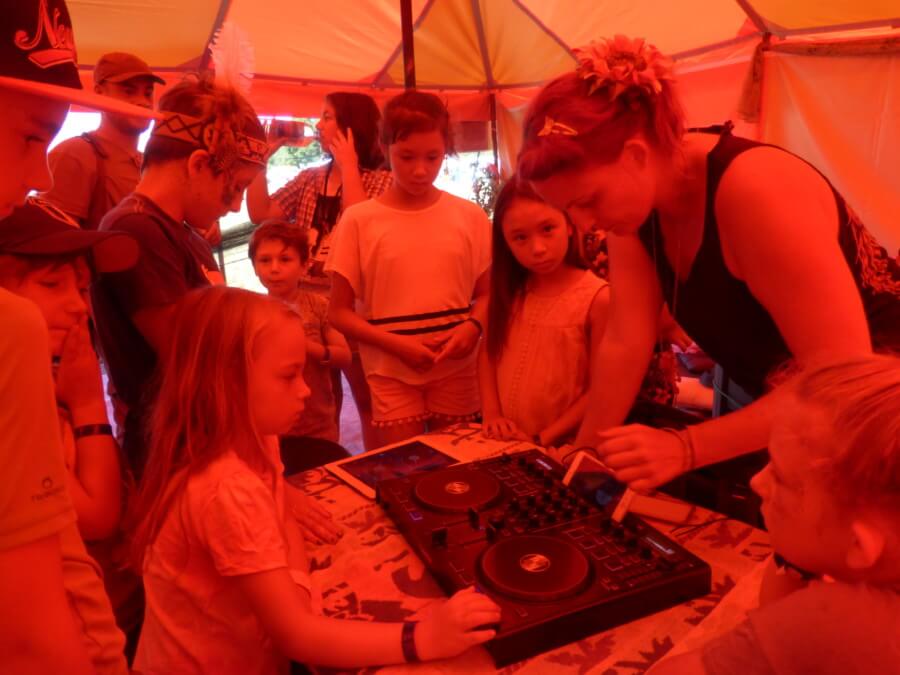 Unlike the larger festivals there was no queue so the children were able to gather around the decks and have a full lesson. I found it incredibly interesting too and I learned enough to try it out at home.

The Rig was also back – a large area full of musical junk to bang on and play. Musical fun for all ages! 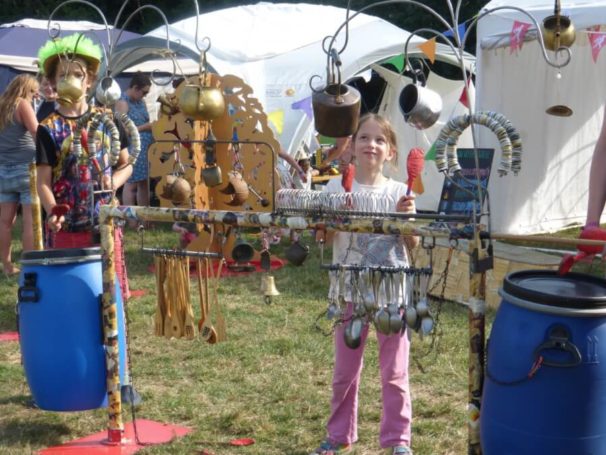 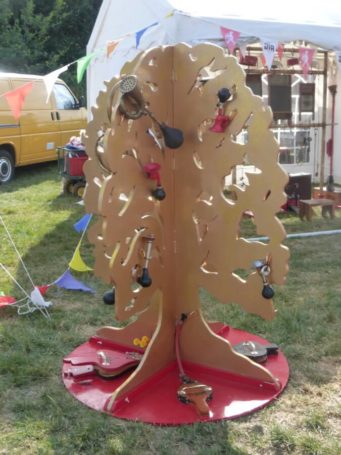 All the kids’ activities were free, including the bouncy castle and bouncy slide. Different age groups had different allocated times, so it meant there were no teenagers bouncing on toddlers’ heads.

My children love climbing more than anything else, so we pre-booked sessions with Branching Out, as they were offering a discount on advance bookings. We booked them into two of the activities – Bounce About and the Low Ropes. Bounce About consisted of layers of cargo netting which they could climb up and jump down. They were high up however and one of our children was too scared to go up and didn’t enjoy it – so I would recommend only for children who are ok with heights.

The Low Ropes was a challenging treetop walkway course with zip lines through the trees. My children absolutely loved this and we had to tell them we were only going to do it once as they wanted to go on again straight away! There was also the High Ropes course for adults and older children, which was a higher more challenging course.

What child doesn’t love a tiny steam train? For £1 each you get a trip round the site, and those camping by the tracks were incredibly good humoured and cheered and waved at all the children as they went past. 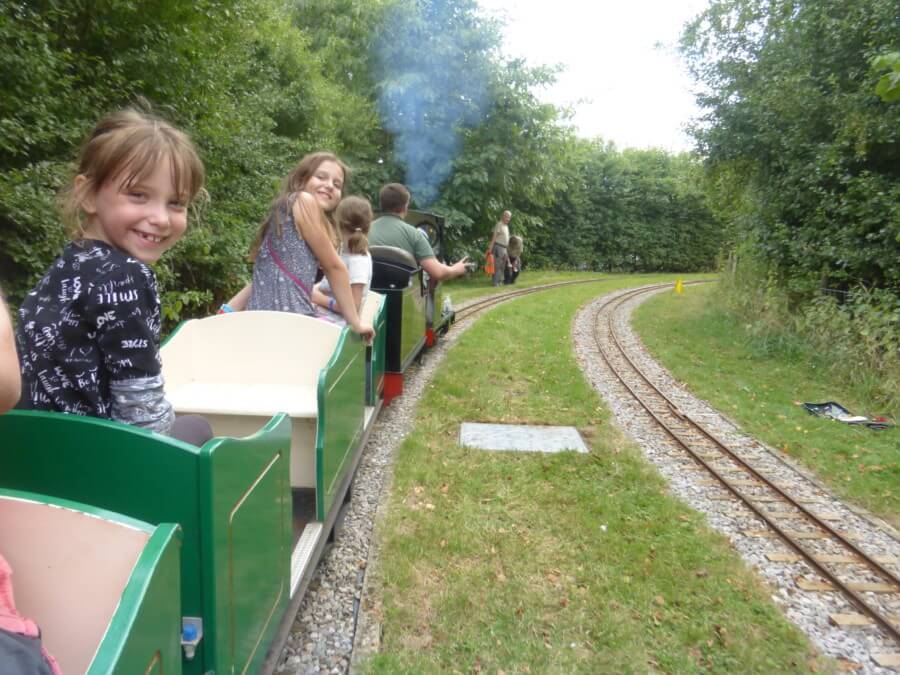 If you enjoyed a bit of raving in the 80s/90s and now have children – this festival is for you.

By the end of Sunday we had smiled, we had danced, we had made friends and we had laughed a lot. The Chilled in a Field top DJs gathered on stage to play out 2018 with some excellent trance and dance crowd pleasers. We cheered and hugged each other and said goodbye for another year. See you all at Chilled 2019!

Buy your early bird tickets now, before they sell out!