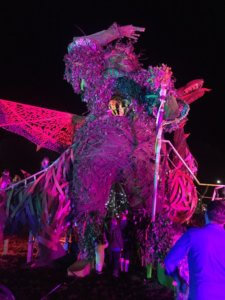 The Lights from the Late-Night Lock in

So here we go again. Green Man Festival. Our 7th year, the Festival’s 15th. I have waxed lyrical over this festival for every year we have been, we fell in love with Green Man, we made lifelong friends and have told anyone who will listen that Green Man IS the best festival in the country.

I don’t want to over the same old ground again. Festival Kidz’ review of last year will tell you everything you need to know about this wonderful festival. You can also read our review from last year on our blog.

So, what the hell am I going to write about? What’s new? How do I keep you, dear reader, transfixed?

This year nearly didn’t happen. I’m not going to bore you with details but thanks to our friends at Festival Kidz (whom for I am gratefully writing this piece) and our network of pals and adopted family at the festival we found ourselves making the short hop over the Beacons from home to Glanusk.

This year we were accompanied by some friends that we’ve known all our lives. As a family, they had never been to a music festival before (Myself and Tim had been going to festivals together since our teens however) so Vicky and I felt we needed to make a special effort to make sure they had a good time. We didn’t need to, Green Man is more than capable of entertaining and enthralling without us having to help! 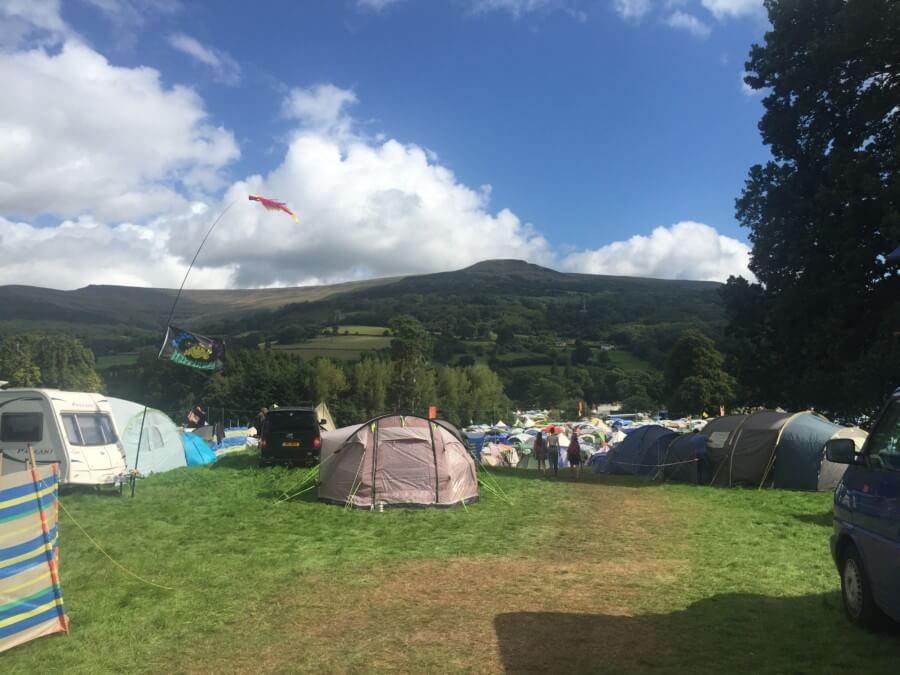 First impressions from our friends of the site, well after the shock of the walk from the car park to the campsite (be warned if you end up with orange parking, it’s a big trek) was how totally and utterly beautiful the site is. Camping is tight in places but there is plenty of wide walk ways and lots of lovely lush grass to camp on. Showers and toilets always looked clean and great to see plenty of recycling points on site. We’ve said it before but as festivals go Green Man is in one of the most incredibly beautiful settings. 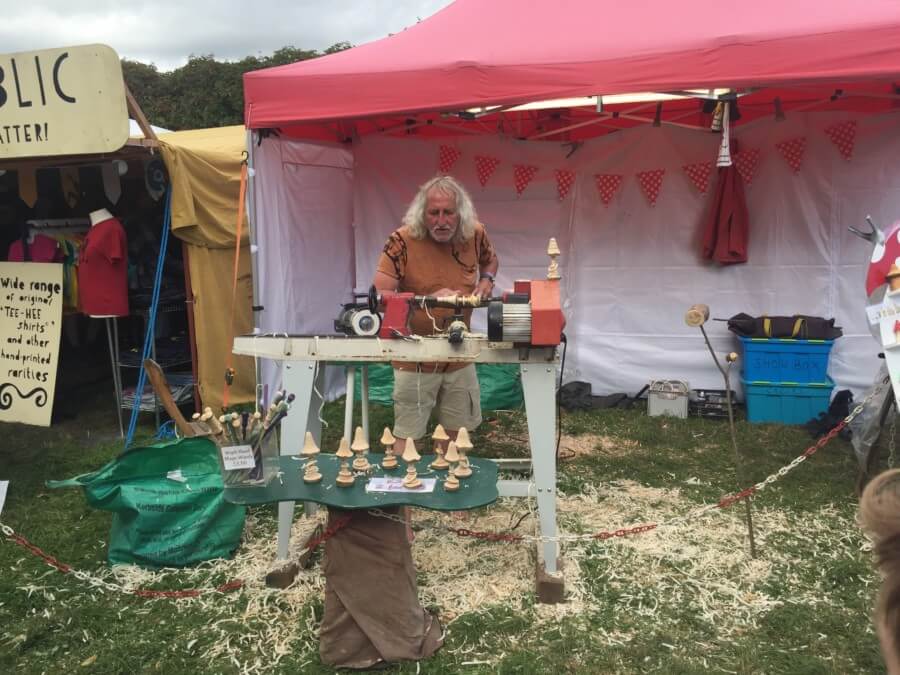 Dylan, now 8 is a festival veteran, and as he knows Green Man like the back of his hand, was given free reign to explore the festival with our friends 9 year old son. They had points of reference to go to if they were lost (Ralphie Mushroom Man and The Flying Seagulls) and walkie talkies, which are completely useless at festivals. Standard Walkie Talkies only have a small number of frequencies, and everyone is using them. You can have some great conversations with complete strangers however!

So with the boys off and exploring we were left with Matilda (2) the adults and a teenager. This afforded a new experience at music festivals for us recently, Actually watching some bands! 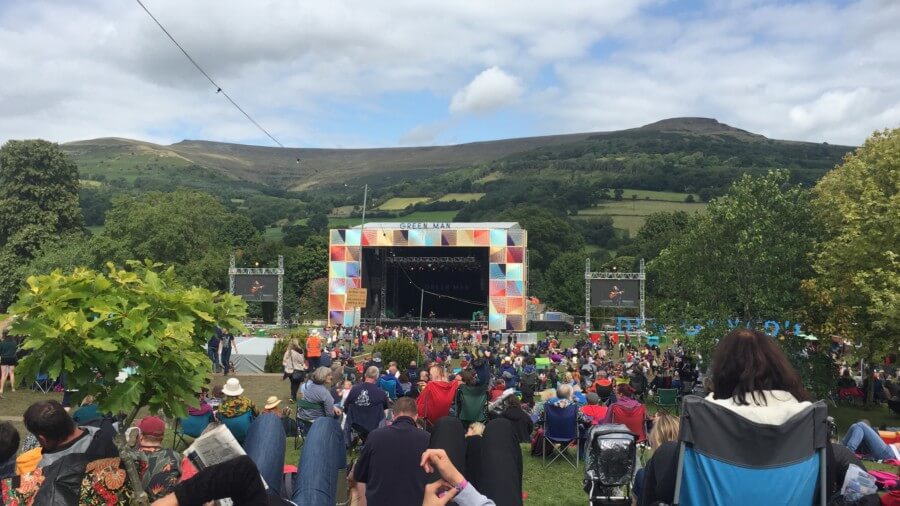 Green Man’s line up this year was (for me anyway) a bit of a coup. I first saw PJ Harvey during the Dry tour in the early 90s and have been a bit in love with her ever since. Ride also were a particular highlight, 25 years on from watching them play Lennon’s Don’t Wanna be a Soldier at Reading in ’92 the lads have got better with age. Thursday night saw us all out till late, enormous grins our faces watching this amazing band. Afterwards, my friend and I re-lived our youth in a few bars on the walk back and had an impromptu sing song in the Rough Trade tent, whether the guys at RT wanted to hear us or not!

Friday was a quieter, more subdued day, the weather mixed, we did something a bit different for us and spent some time at Babbling Tongues, listening to Irvine Welsh and the true Princess of Wales, Charlotte Church. While both of them may have been preaching to the choir a little bit, their words were heartfelt and engaging. Whilst we stayed to watch the Princess of Wales, Vicky and Matilda went for a walk back to the kids area. 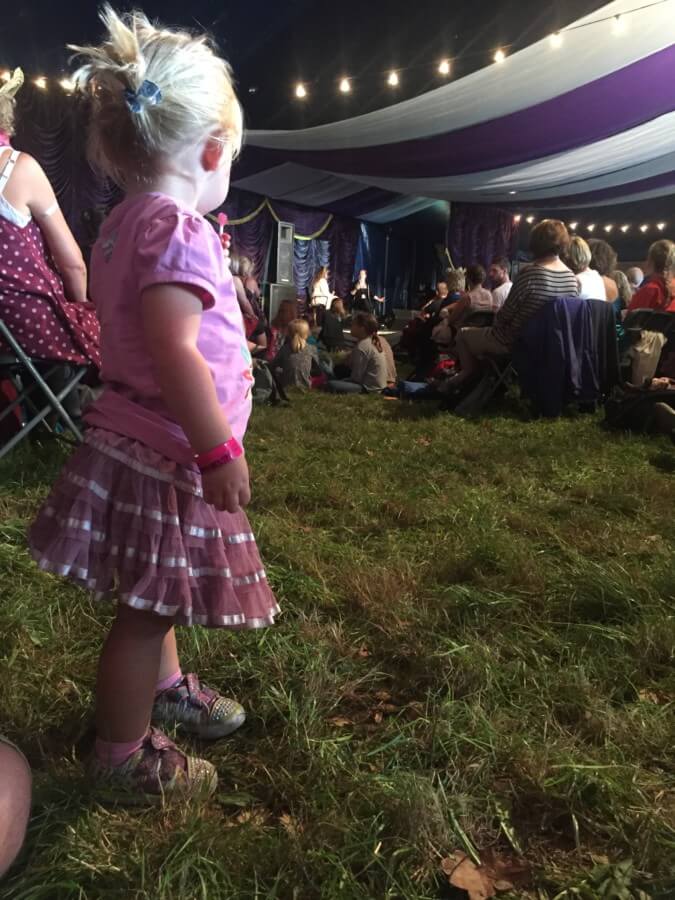 As well as watching the amazing Flying Seagulls you could get involved with peddling bikes to make pencils, create and make dinner in the mud kitchens or make anything from wings to puppets in the craft tents run by junkfish.

For younger children there were plenty of games and books, drums made from buckets and a lovely castle with sand around it to play in. You could easily spend the whole weekend at the kids’ area alone. An early(ish) night saw the boys return from their adventures exhausted with Potato on Sticks puppets made at Junkfish, long and detailed reports back from Einstein’s Gardens, and a cottage industry that had sprung up underneath a conker tree supplying carved sticks in return for conkers! 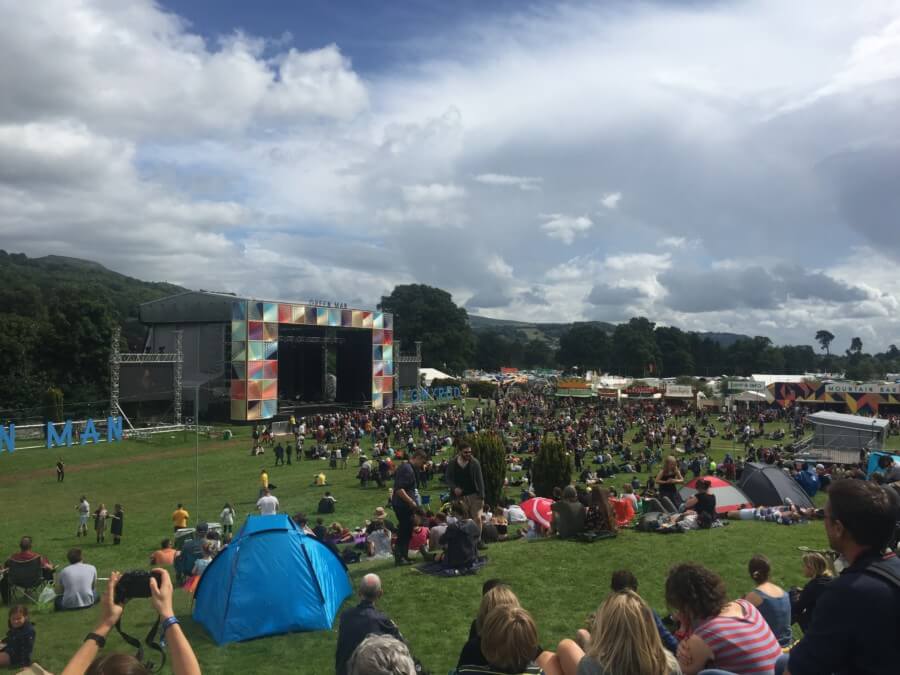 Saturday was a glorious day. It would have been rude not to have a mid morning drink so we found a picnic bench near the Far Out stage and sat in the sun whilst listening to music in the distance and watching people leaving wishes on the Green Man. Then more music!

We spent the day at the main stage and enjoyed lashings of wine and Shirley Collins, munching on Paella from JamonJamon and “the best cheesy pasta (Dylans favourite) I’ve ever tasted” from Mac and Cheese, a wander to the Far Out stage to catch the Allah Las and then back for Michael Kiwanuka and then, a blistering, barnstorming set from Ryan Adams. 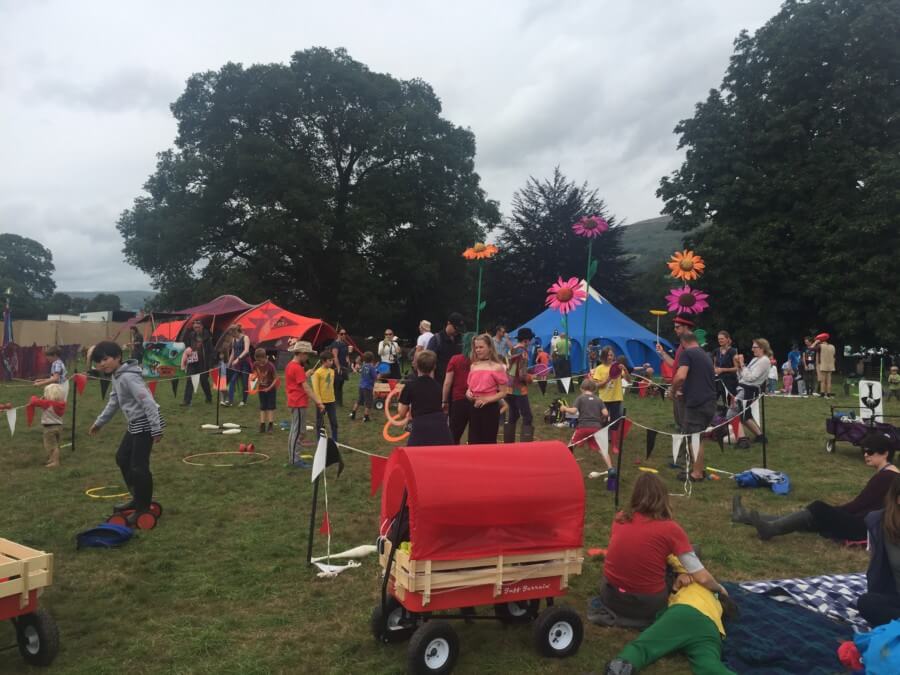 The teenager with us had discovered the teen area on Saturday and we had lost her to the tents full of yoga, crafts and music. The boys loved the space too but the stalls selling bubbles and juggling toys near it were a distraction and they kept going back for another play with the juggling toys. The rides near to this area can be a pain – be warned to avoid if you do not want to part with any money.

Not far from the teen area is Einstein Gardens, an area bursting with science and creative ideas. We really ran out of time to spend much time here this year but the feedback from the boys and the teenager was that it was brilliant and they pretty much spent the whole weekend there, playing in the ponds and streams whilst listening to workshops and getting involved when they felt like it . It was wonderful relaxed day, in an atmosphere that could only be created at Green Man. 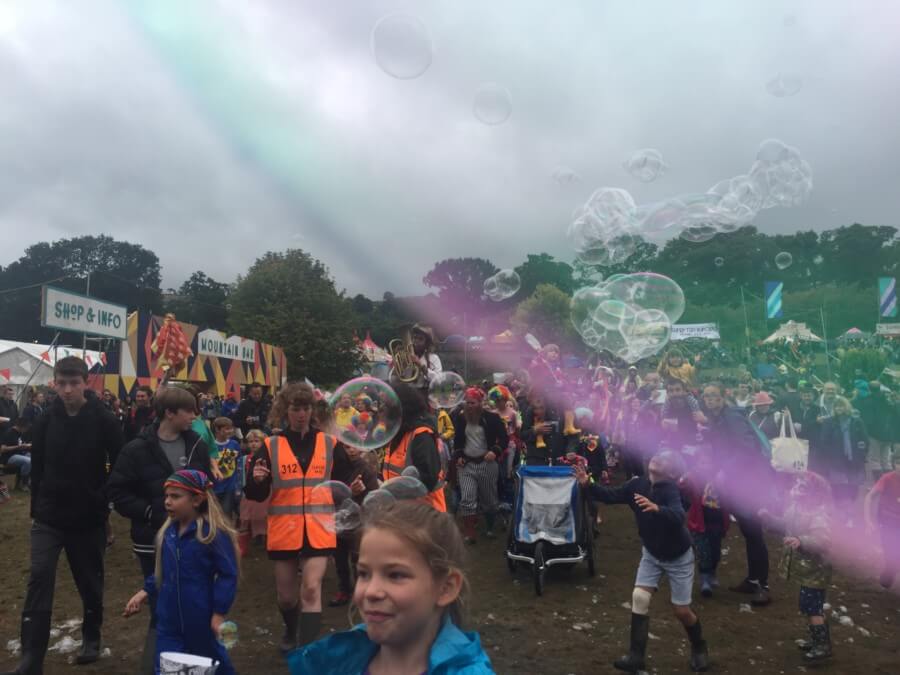 Sunday. The weather turned and sharp showers and sunny spells were the order of the day. Best day of the weekend for music as far as I was concerned. The Sleaford Mods (my first time seeing these loons!) Julian Cope and then, the woman of the hour Polly Jane Harvey, but first, a morning and afternoon with our friends in the Kids’ Area. More creating and making in the craft tent with Junkfish and watching the now famous pirate show with the Seagulls. I had the honour of pulling the trolley for Mr Bubbles at the front of the Kids’ Field parade in the afternoon and firmly nodding in agreement with Ash Perrin, leader of the Flying Seagulls when he proclaimed the Kids’ area the best out of all the festivals he performs at (lets face it, he’s better qualified that any of us to give that opinion!) It was wet on the Sunday but thanks to the festival putting in lots of extra precautions for the bad weather it was perfectly manageable. 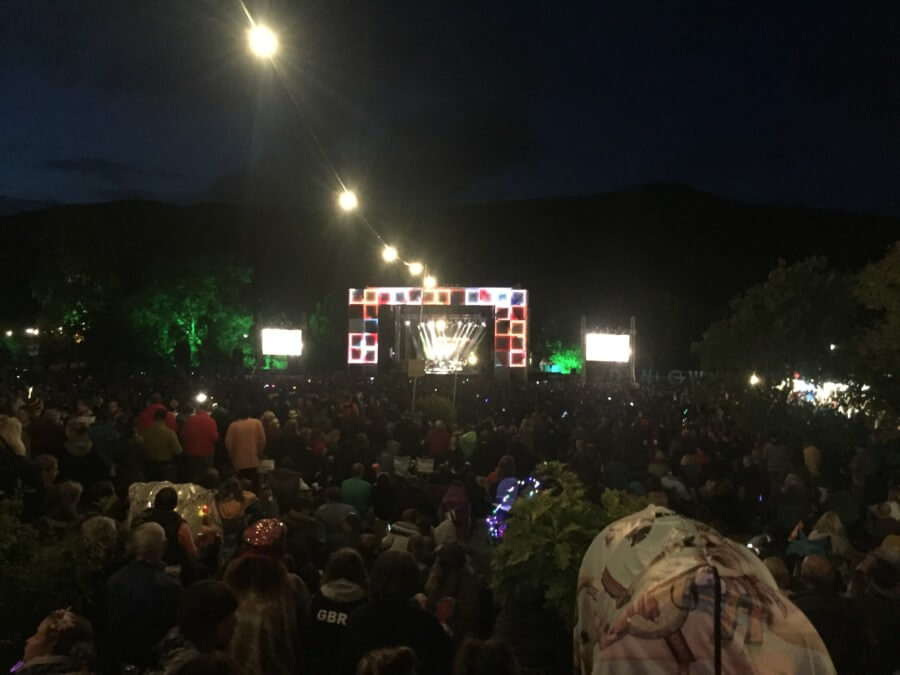 Once again Green Man delivered. In its 15th year while in celebratory mood it still never lost sight of its morals and ethos. I’d wandered back to Babbling Tongues first thing on Sunday to catch a talk from some the founders of the festival, listening to reminisce of festivals passed and being in awe of their continued enthusiasm and passion. I asked at the start of this review, “What’s new?” You know what, not a lot, and that is absolutely fine and dandy by me. Don’t ever change Green Man. The best festival in the country.