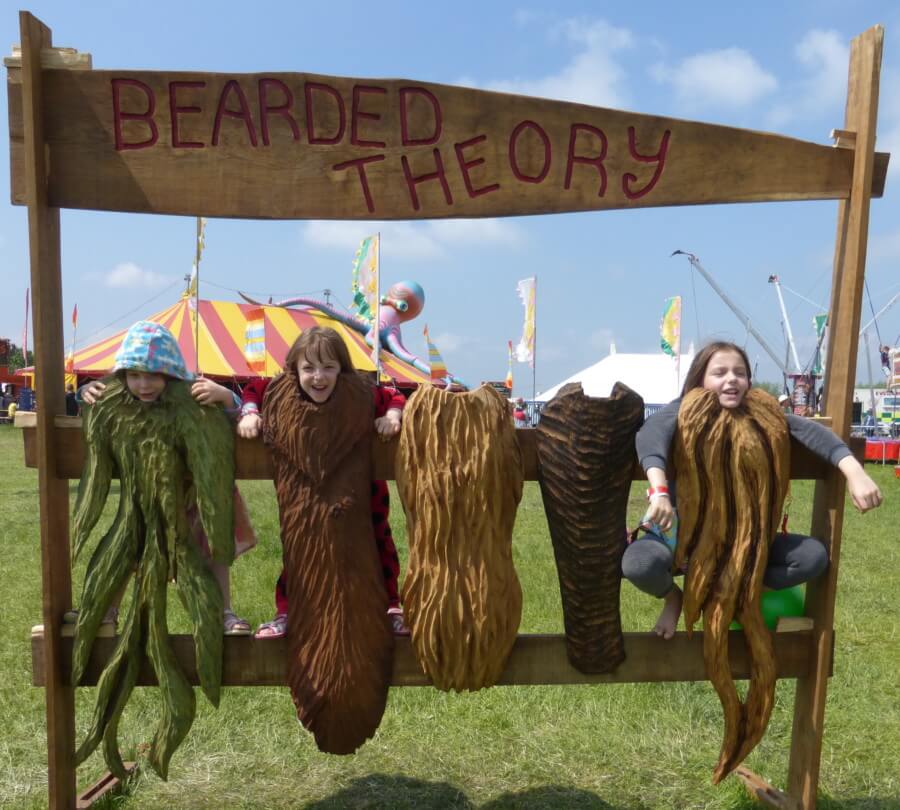 This cheeky statement summed up Bearded Theory for me, and got a huge cheer from the crowd for the same reason. Because for us it was truly a festival of nostalgia from the ‘good old days’ when we were younger.

The Bearded Theory crowd is truly something unique – I am sure these are the same people I was dancing in a field with all those years ago. So this is where everyone ended up! It was full of so many friendly up-for-it people. 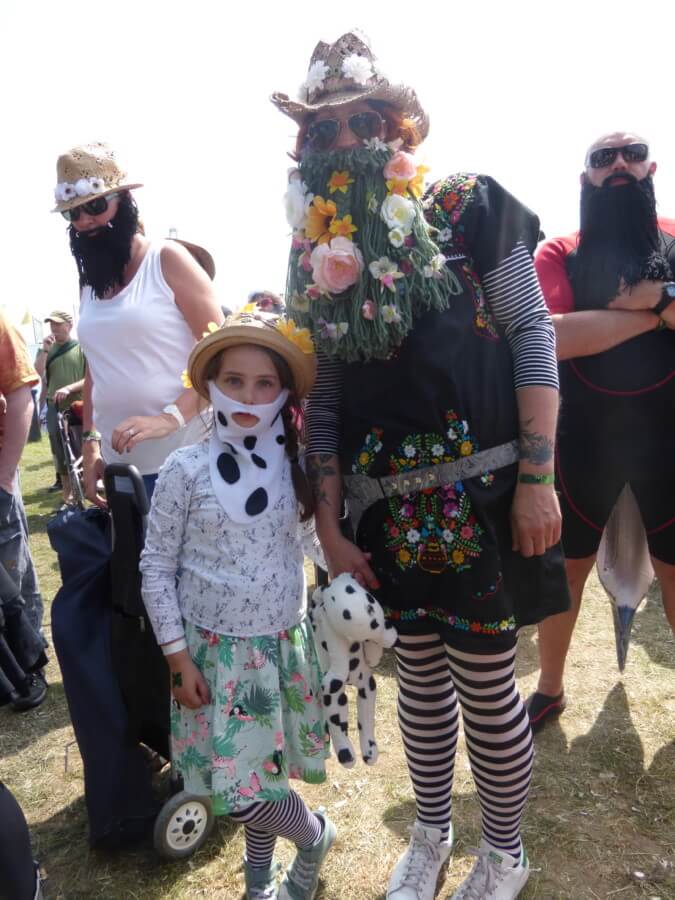 So what was so 90s about it? I’m used to looking at a festival programme and hardly recognising any names, but this one could have been straight from Glastonbury ’92. Billy Bragg, The Levellers, John Otway, The Orb Soundsystem…

But the dance tent – ooh! the dance tent! I haven’t seen a proper one in years and here there was one mostly playing psy-trance and full of UV paintings – it was impossible not to run in for a jump around whenever I walked past.

I had heard there were problems with the toilets in previous years but we didn’t have any problems with them – they were the usual blue portable toilets but they were mostly clean throughout. It’s still necessary to carry paper and hand gel just in case, but it wasn’t needed that often. We were camping in the campervan field for the first time, but we talked to campers who were happy with the camping provided, and the family camping also had its own cafe, and was a short distance from the car park.

There were some lovely food options available, so much that I didn’t get to sample everything I’d like to! Our favourite place was Nana’s Kitchen in the Woods – selling child friendly staples such as jacket potatoes, shepherds pie, a roast on the sunday and lovely cakes and cookies all day. The pizza stall did margarita pizzas for £5 which made my children very happy (and there was never a queue!). There was even another stall doing small kids pizzas for £3.50 – bargain! 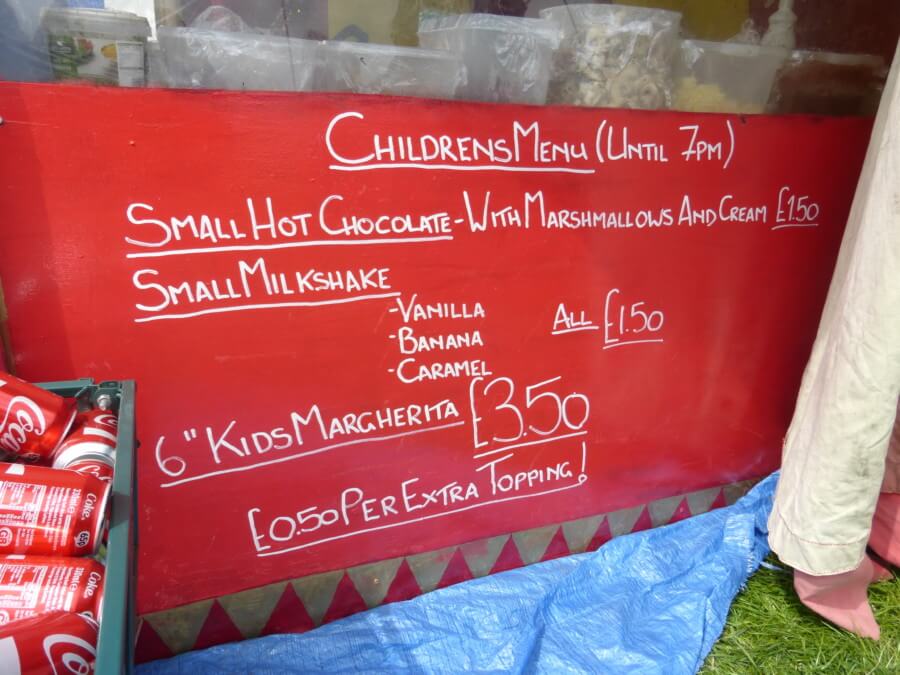 We loved the kids’ area, there had been so much thought put into it. There was a huge craft tent offering so many different things to do – and they were available all day which was different from many festivals we have been to which offer only one thing at a time. 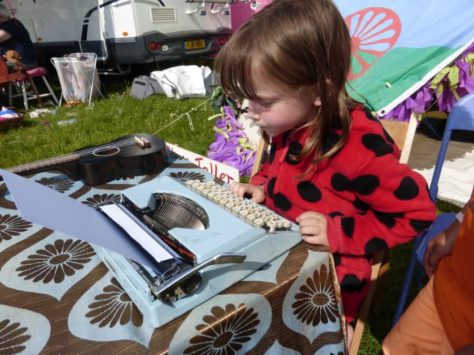 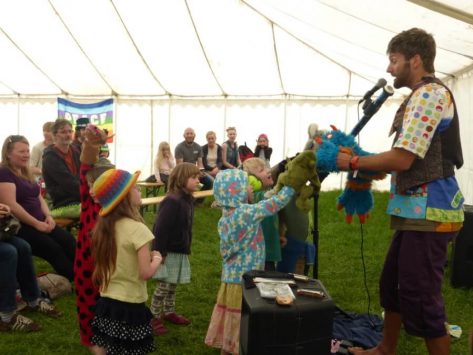 In the centre of the kids’ field was a large roped off area with circus toys such as diabolos, hula hoops and poi, with activity tents around it, so the whole area felt very safe and the children felt able to run off and play.

My children particularly loved the tent full of cushions and books which made a quiet relief from the rest of the festival. They also had a typewriter which is guaranteed to keep children enthralled for a long time! The Rogues Hideout for teens was fantastic – offering DJ and beat boxing workshops, and a chance to use a real DJ box which and was great for teenagers who are often overlooked at festivals. 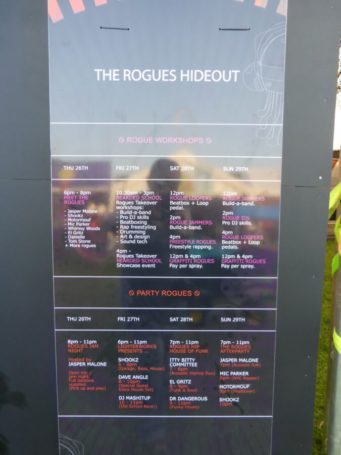 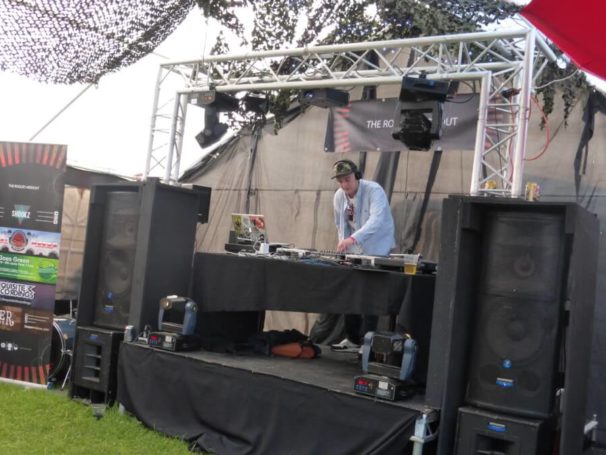 The Bearded Theory OFSTED registered school is unique and wonderful, and surprisingly, is free! We were granted an authorised absence from our school for the Friday, and dropped off our children at 9am along with hundreds of others. The registration process was a little chaotic but went well, and my children were soon jumping up and down to Mr Motivator (the first class was P.E.) while the mothers all watched happily! We decided Mr Motivator was possibly an alien as he didn’t seem to have aged at all, and he was so sweet going round and getting selfies with us all!

Then we had a couple of hours to ourselves in the festival, before we picked them up for lunch. Unfortunately this didn’t go as well as planned and there was a bit of a scrum at pick up, so by the time we’d picked them up they had about 10 minutes to wolf down the sandwiches we’d made and then we had to drop them back again, to pick them up again at 3pm. 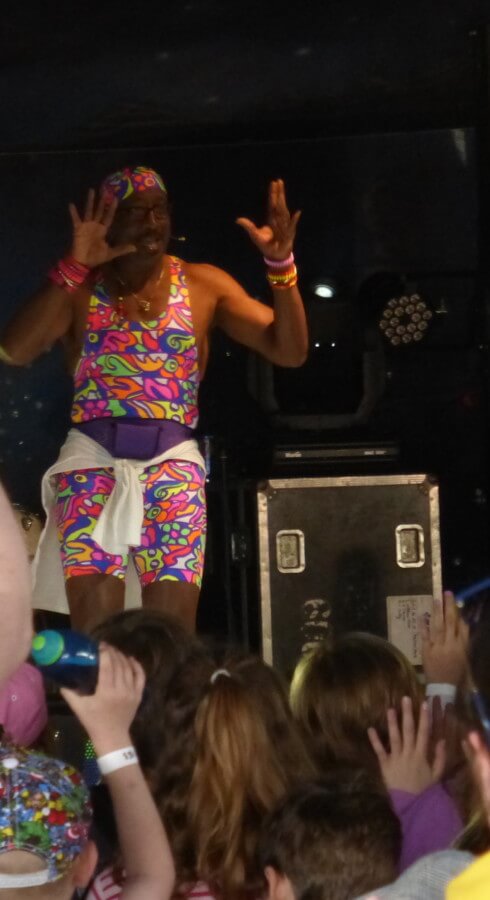 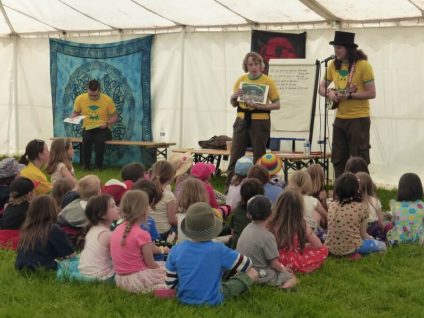 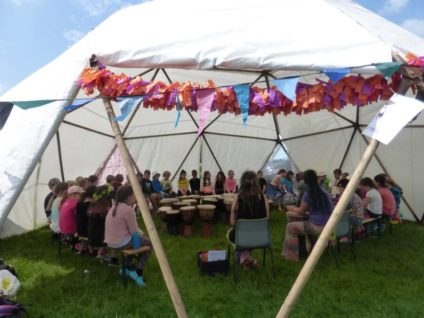 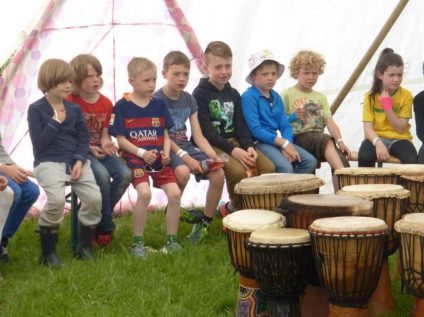 All three children had a fantastic time. They did a full day of classes but all the lessons were festival related – e.g. the english class was about storytelling and the music class was a drumming circle. While the girls were learning while having fun we actually had a few hours to ourselves.  We chose to grab some of the lovely food on offer and chill out with a cocktail in the early afternoon, which was a welcome break from the usual madness of our family!

Enrolments to the Festival School which takes place on the Friday of the festival will go live on September 10th at 9am when tickets go on general sale. So get in quick!

The only thing that threatened to spoil a near perfect festival were the loud expensive fairground rides right at its heart. This may not be a problem if you have one child, but with three children wanting to go on every ride at least once this caused us problems every time we walked past them. And they were right in the middle of the festival, in front of the kids’ field – some of them belching out the usual awful fairground music and petrol fumes. It was such a relaxed festival with a lovely atmosphere, and yet we were forced to spend a large part of it paying for fairground rides at £3.50 each (so over £10 each ride for us) while not even being able to hear any of the stages, just someone shouting ‘next riders ready!’.

I spoke to some other people who said that the numbers of rides have gone up a lot over the years – my plea to the organisers now is to at least remove the noisy petrol-fume-belching ones.

(NOTE: I have just found out that the organisers have planned to reduce the number of rides and stop them playing the awful music! So I can now say that Bearded Theory will truly be perfect next year – get your tickets now!) 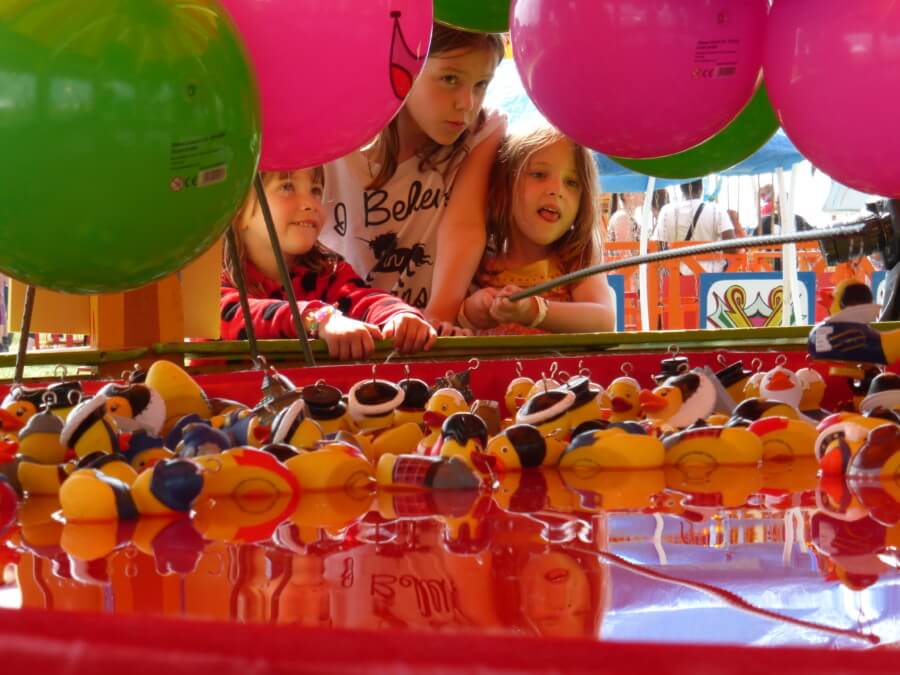 For a small festival there was a great range on offer – a good mix of old and new bands, and different styles. I particularly loved the dance tent, and the Maui Waui which played a variety of different styles of music.

Terrorvision were lots of fun, I loved them as a teenager and we all sang along to their hits. Levellers did their usual impressive set. I love Billy Bragg and he also played his hits to an appreciative crowd – it was great to get to the front to watch him. Although the field was always busy, there was always a place to stand where you could see the stage. 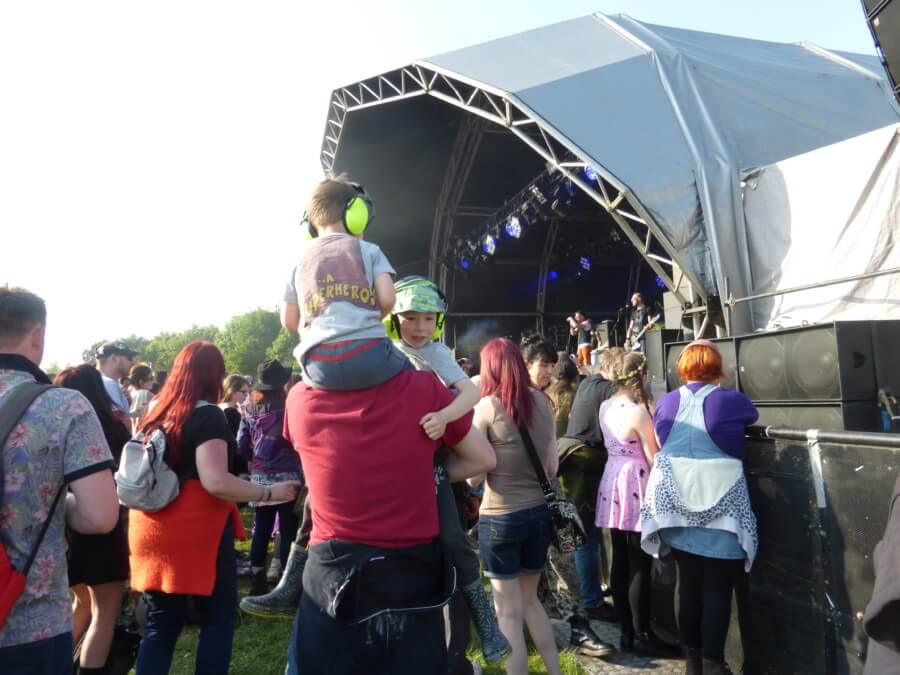 I didn’t see all the headliners, mainly because the main stage field was quite crowded and my three children don’t like crowds which made it a bit too difficult – but there were plenty of other families enjoying themselves to brilliant sets by Squeeze, Turin Brakes and Stiff Little Fingers (we could hear the sets from another part of the festival which was great). There was lots of new music too, it wasn’t all 90s, and with several stages to choose from there was always something great to see. In fact there was so much good music in the line up that it was impossible to see it all!

There were several bits of silliness going on around the festival – the most fun were the Red Barrows – a parody of the red arrows with red wheelbarrows. We saw their second show which involved children leading people dressed us as knights around, then throwing water balloons at their parents. My children particularly loved this. There was also a beard competition where everyone wore false beards – we hadn’t brought one but had the chance to make felt ones in the kids field so we could join in! I do love a bit of silly dressing up. 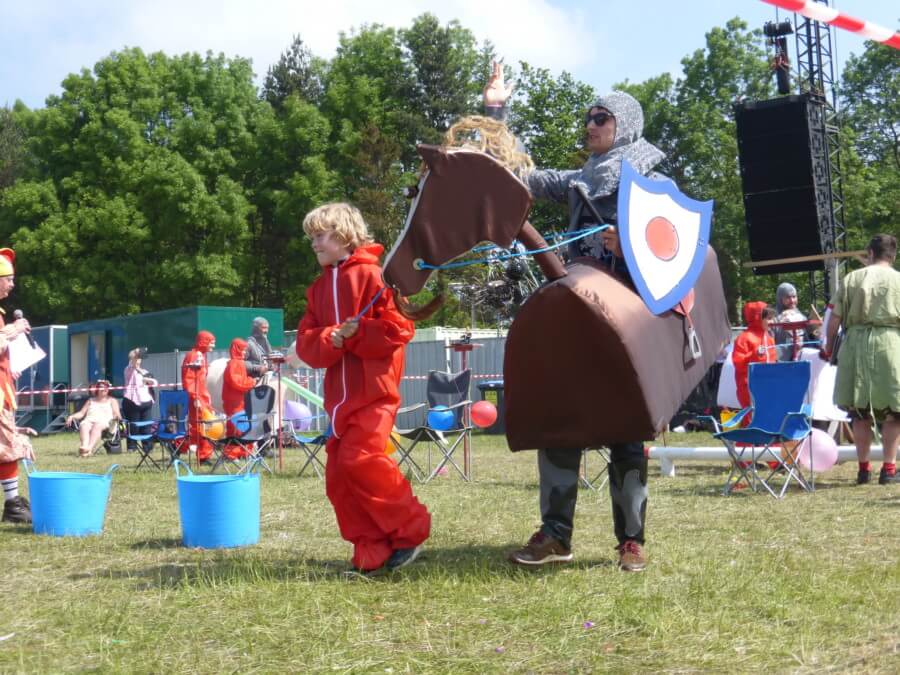 The Woodland Stage was by far the best place in the festival, especially as it was so hot this year. A cool shady stage within the trees, with hammocks to relax in, a lovely cafe serving child friendly food and cakes, and a cocktail and real ale bar. We probably could have spent the entire festival hiding out in the woods. 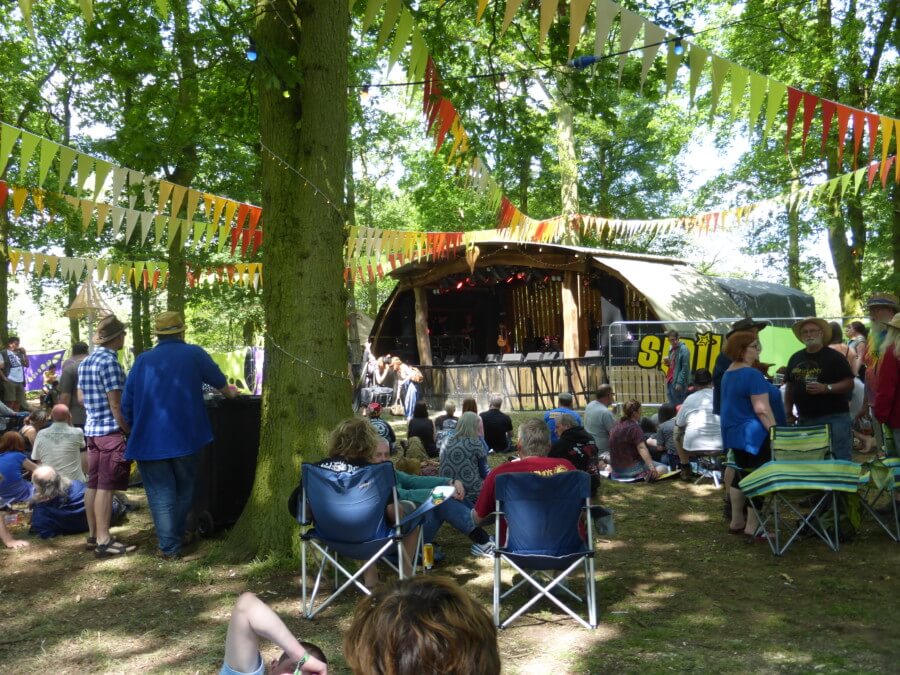 At night, the festival came alive with dance music and late night jazz. I discovered a new band there called Smerins Anti Social Club in the Maui Waui that played jazzed up versions of TV themes and other popular songs.

The dance tent was wonderful – full of UV lights and artwork, and fun people dancing around in silly costumes. I even managed to catch some of The Orb Soundsystem, I still remember dancing to them at Glastonbury in the early 90s! It was a fantastic nostalgia trip for all of us, and I looked around to smiling faces.

Right at the end of the festival, Beans on Toast played the Woodland Stage to a large appreciative audience – and when he climbed out into the crowd it was like a little bit of magic. 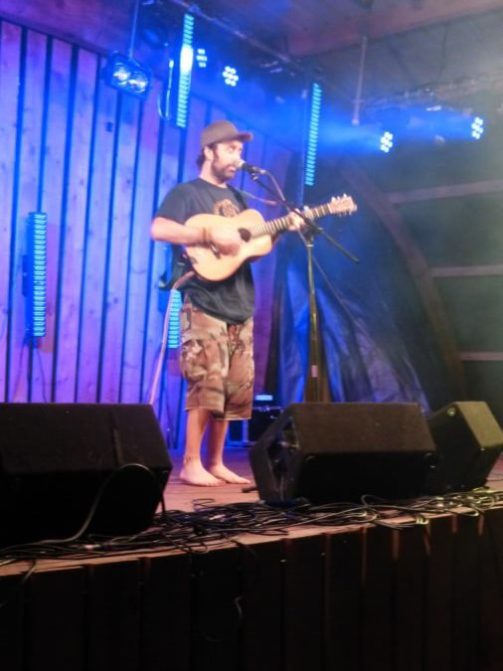 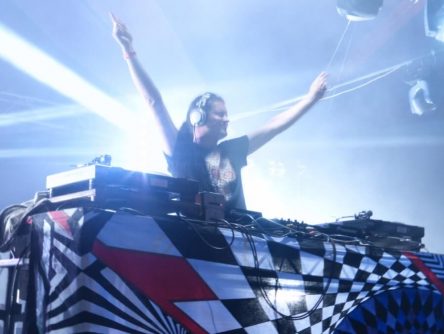 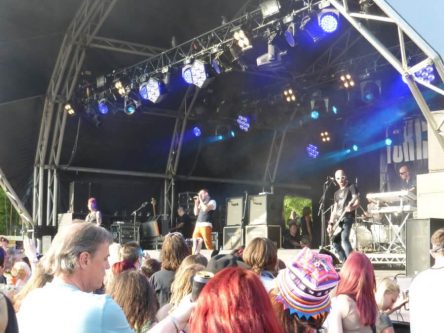 What did we think?

If the fairground rides hadn’t been there, I would say it was absolutely one of the most perfect festivals I have been to.

Friendly, with lots of great entertainment, especially if you love the 90s, and loads more besides!

Watch out for our special piece on the wonderful Bearded Theory School – coming soon!

For more information on Bearded Theory please look at our Factsheet here. 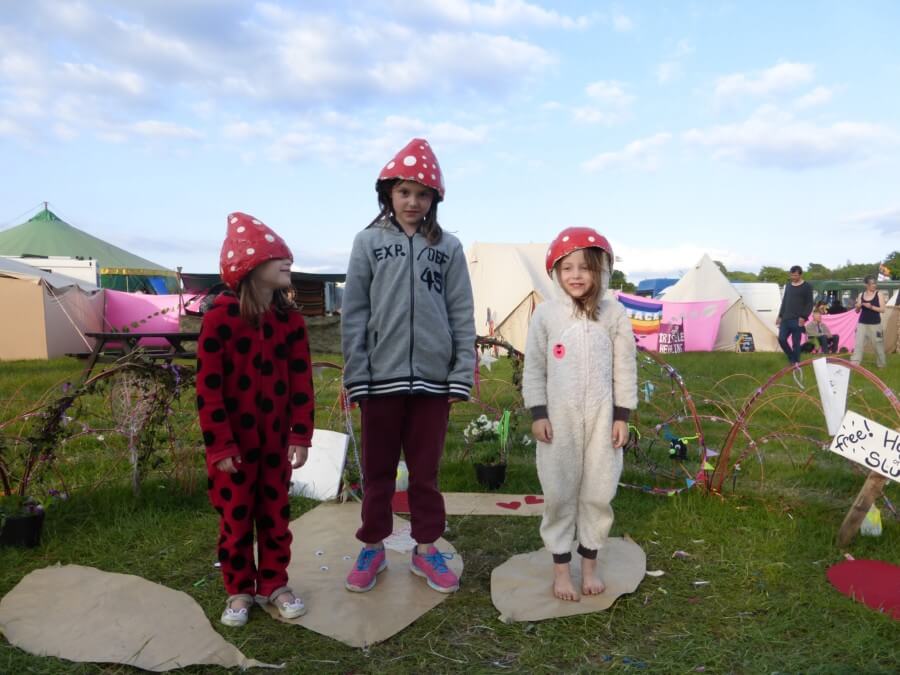 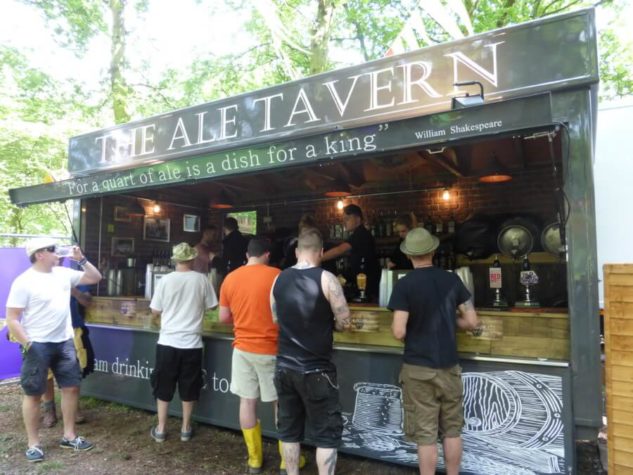 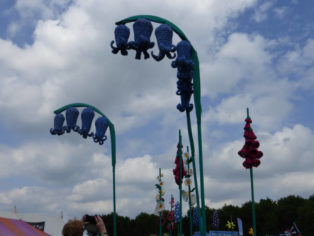 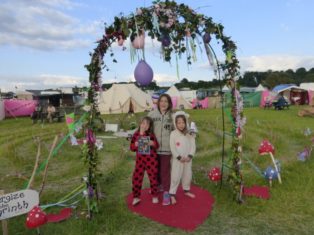 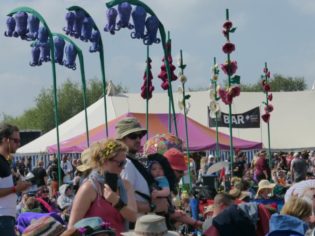 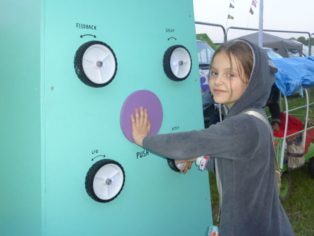 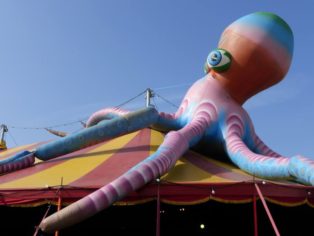 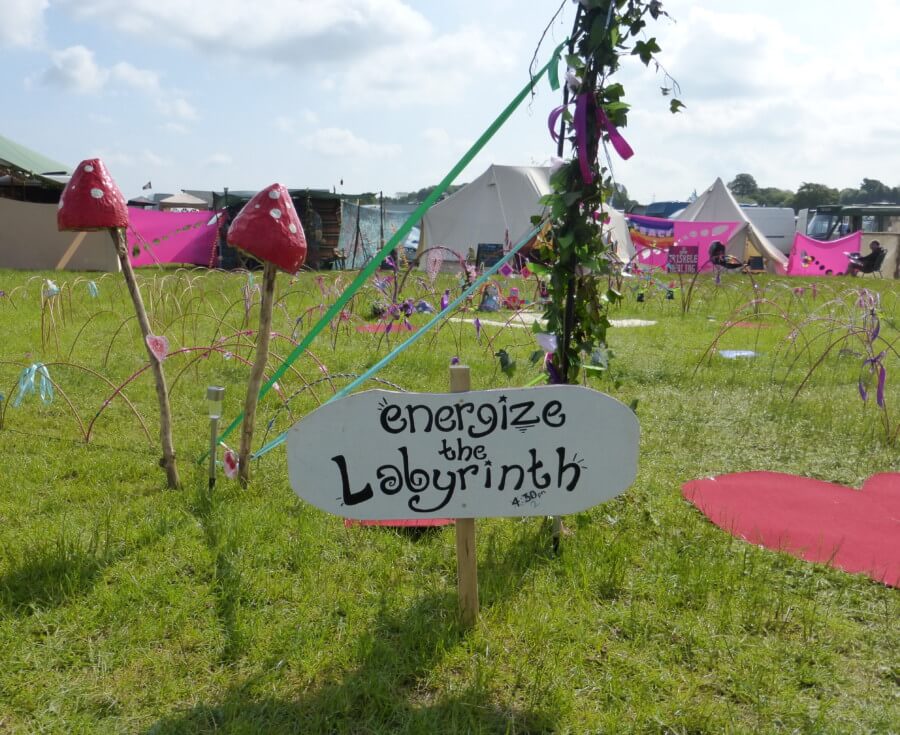