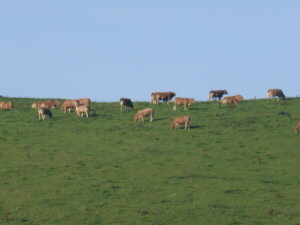 Farmer Phil’s is such a difficult festival to write a review about. It doesn’t tick any of the ‘family friendly festival’ boxes – the facilities are very basic and there’s not so much entertainment on offer as it’s so small, and there’s no dance music (although this might be good news for some!)

However, the festival was voted ‘best tiny festival 2015’ by our readers, and now that we have visited we understand why. It’s certainly different from all those ‘identikit’ commercial festivals out there. And it will certainly suit those parents wanting to take their children properly back to nature. 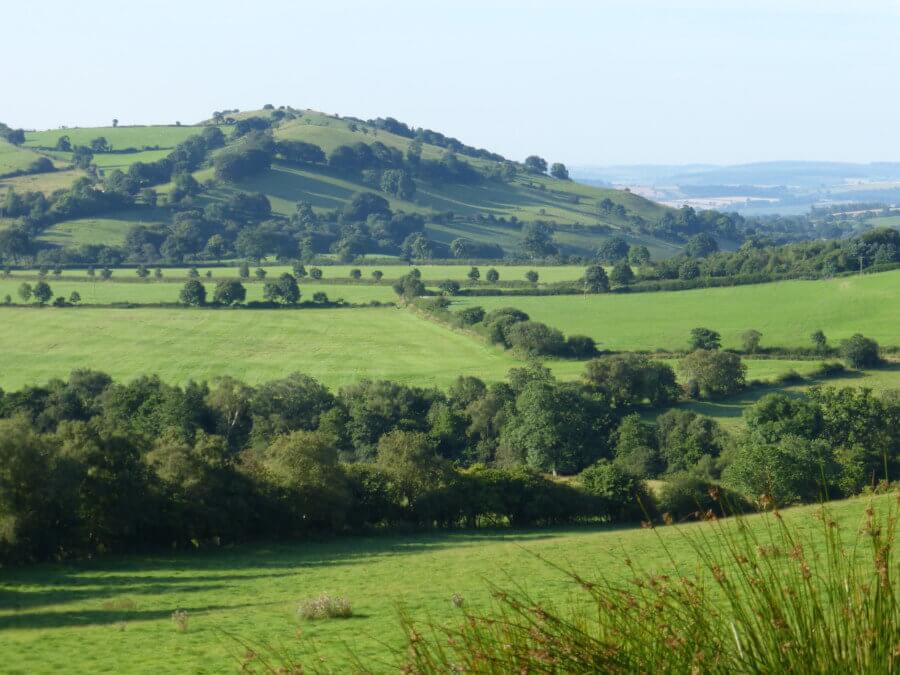 There are so many things about this little festival that mark it apart from all the rest. For us, the best thing was that it’s in acres of farmland that you can just wander around in – full of trees, plants, insects, animals, and even a little stream at the bottom of the hill. The children spent most of their time down at the stream playing their own little ‘Swallows and Amazons’ – paddling, building dams, following beetles, climbing trees – and of course falling into mud and water so much that we ran out of clothes and had to reserve one set of wet and muddy clothes for them to play in so we could dry off the rest! 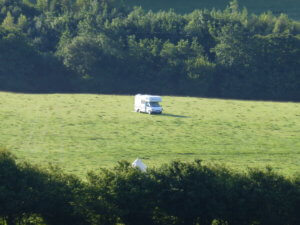 Camping was beautiful, with loads of room to spread out. However there were no water taps and water was provided in a large tank near the entrance to the site, so if you’re parked in family camping it could be a long way to walk. I would advise everyone to bring either a wheelbarrow or one of those roll along water carriers we saw everyone with – we’re definitely going to get one of those for next year!

Because you could park by your tent, it made the whole experience so much easier. Setting up camp was a doddle – park up and put your tent up! We haven’t been to another festival where this was possible. It also meant you could get back in the car and go on day trips in the surrounding countryside. The cost of the ticket includes camping for the week, and we recommend going for the whole time if you can.

The area around the festival was simply stunning. One day we just drove over the hills and stopped at the viewpoints – the children climbed around the bracken and heather, and I showed them how to find the wild blueberries which grew everywhere. Further along there was an area you could take fishing nets and fish in a small stream. Then further along was a small town which was great for stocking up on food and charcoal for the BBQ. We also found a place selling firewood, and you could buy firewood from the festival too if you managed to catch the guy driving round with a pickup full of it. 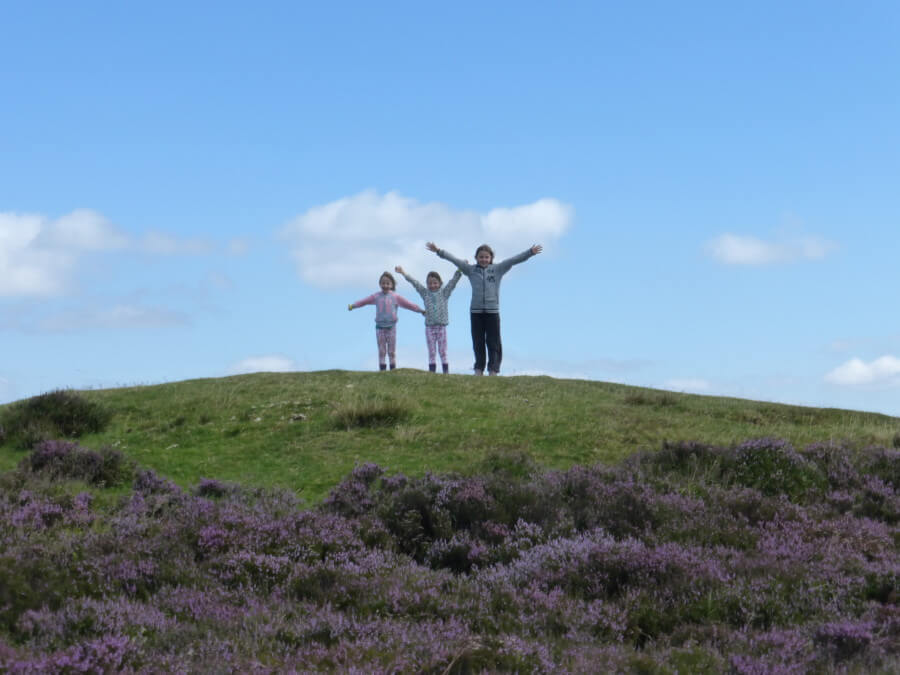 The first time we went for a shower there was no water, the second time there was water but it was freezing. When we asked the engineer who was checking the showers she told us there was only one gas bottle at the beginning of the day – this was something we didn’t find out until it was too late! My advice would be – keep asking when the bottle is changed and then turn up early! 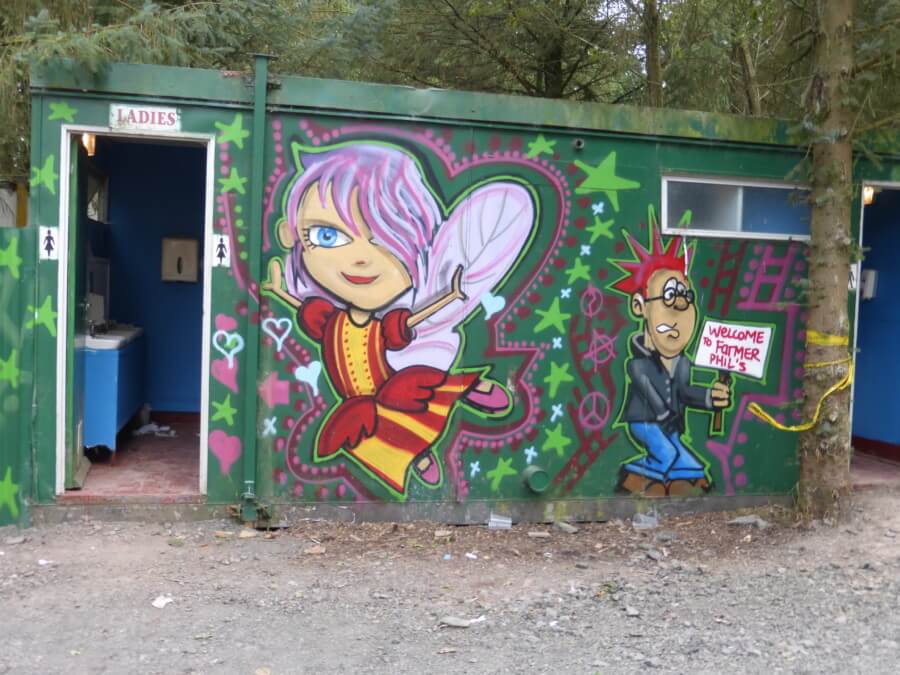 The toilets near us remained clean but the ones in the main site, while gorgeously decorated, became disgusting by the second day. Happily the organisers quickly brought some new portable ones in, but there was never paper or soap, and no taps so no way of washing hands. 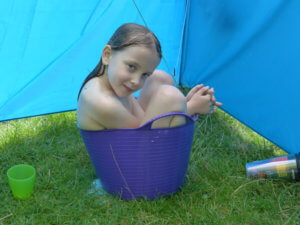 The Box Office knew nothing about anything. And there was no information point. This is something we had not experienced before and we had no one to report things to! People told us there were announcements made at the main stage, but you had to be there at the right time, or rely on the festival grapevine which was quite good at such a friendly festival.

This sort of thing didn’t matter at all to us – we were too busy relaxing – but it’s worth pointing out as if you’re not a seasoned camper you might be more upset by things like this. As you can see we had to improvise in the end to bathe them – the girls loved it!

There was a wide range of food for such a small festival and it was all very reasonably priced. I particularly loved the cheese and port tent – even though I made the mistake of leaving it too late and the gorgeous plates of cheese sold out! A place I’ll make sure to visit earlier when we return. 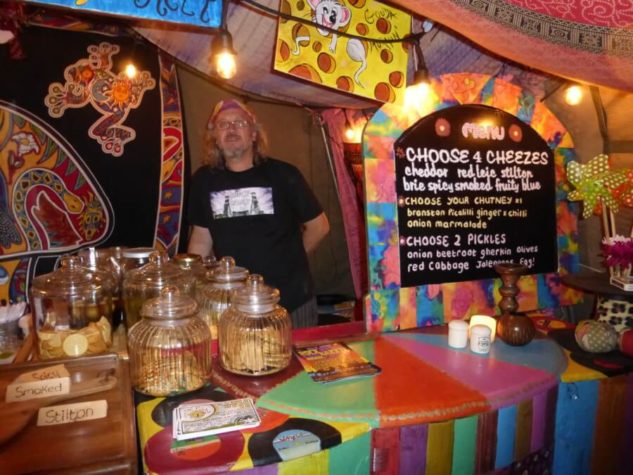 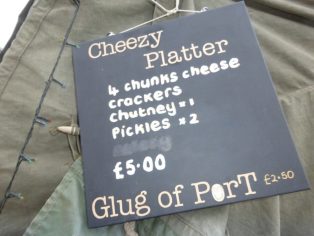 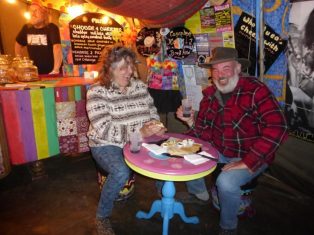 There was a breakfast bar in the campsite selling a variety of foods – breakfast, pizza and coffee – everything you need really! We were grateful for our fire pit however, which allowed us to do bbqs every day. There was plenty of firewood if you had the muscles and a saw to go and collect it, or the farmer sold firewood for £5 a bag, so I really recommend bringing a fire pit or a BBQ. I think you at least need a gas stove so that you can make your own meals.

We were both lucky and unlucky with the weather. Lucky because it didn’t rain – and I have no idea how well the ground would have dealt with it. As everyone was driving round the campsite I imagine it would have been impassable mud fairly quickly, but I have no idea what that would have been like! So luckily for us, the rain held off – however it was cloudy and quite cold, which meant that the children didn’t want to stay out for too long. The festival itself was a walk up a steep hill (we didn’t bring our trolley as it would have been useless) so the little ones got tired quite quickly and we only went over to the festival once a day. It was difficult getting the children to leave their little stream and climbing trees natural play park too! 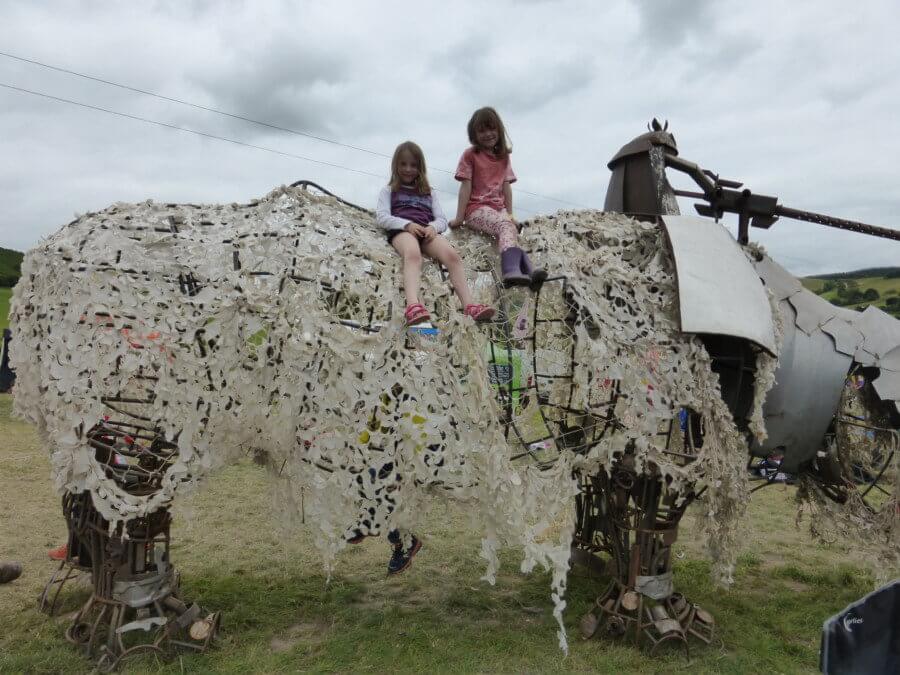 It was difficult to drag the girls away from the stream but when we did get over to the main part of the festival it was just lovely. With one small field, you could sit anywhere and enjoy the music and the view over the hills. There was a large metal rhino for them to climb, and the children also took turns rolling down the hill by the stage and exploring while we were able to listen to the music. We decided to give them their first bit of independence and gave them some money so they could go off and play with the other children (the ‘gladiators’ activity cost money), and buy sweets from the sweet shop. The festival was so small it was impossible to lose your children, which made the whole thing very relaxing! Although I have to admit that for me there wasn’t quite enough to do in the main festival site. This didn’t matter as there was so much to do in the surrounding area.

The main stage was a gorgeous little arena with views across the small valley. It was a great place to kick back and relax and listen to some music. The wonderful thing about this festival was the freedom the children had to explore the surrounding countryside while you watched the music. This would not have been so easy with smaller ones – if you have toddlers you will need to watch them! 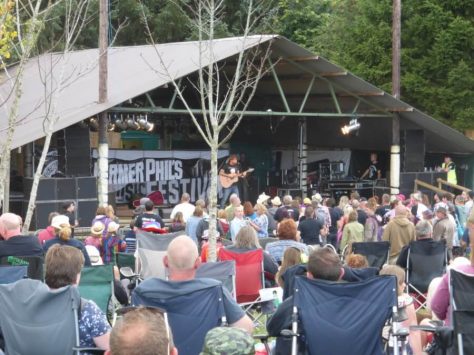 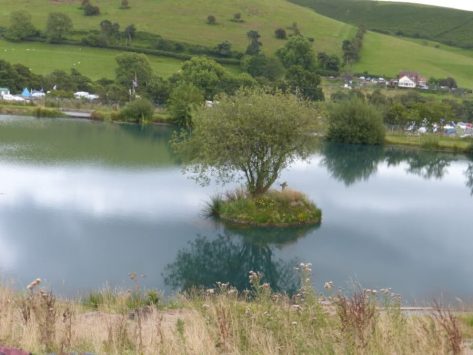 View from the main stage

Next to the stage, there was a little kids area with a circus tent, lots of circus toys to play with and a sweet shop. We found that the reduced amount of entertainment was refreshing – the children were forced to entertain themselves with nature which there was in abundance! I have a great memory of sitting listening to some great music while watching the children chase a frog through the long grass, and roll down the hill. There were a few other children’s activities such as a petting zoo and an authentic Punch and Judy act (that came with a warning about the violence, but the children LOVED it!) which were all great quality. 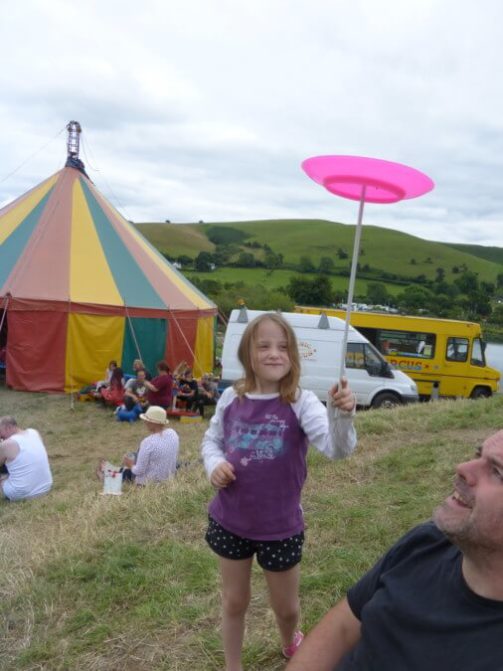 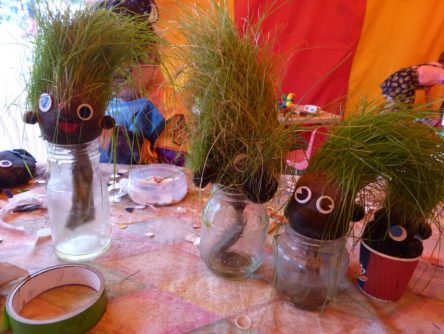 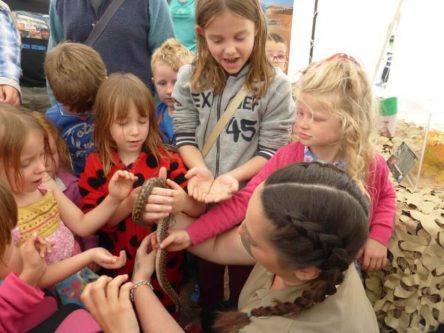 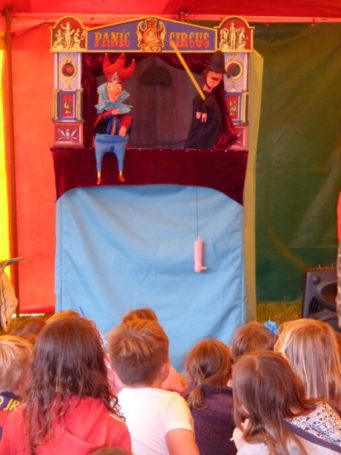 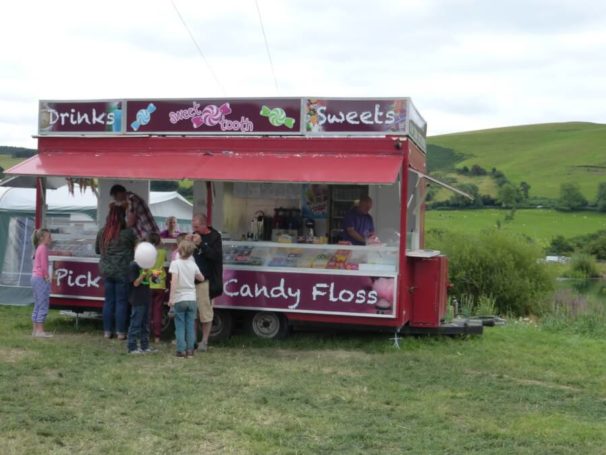 There was also a second stage with some amazing music on it – unfortunately it wasn’t that easy to watch as it was in an awkward place on the hillside with nowhere to sit. Another tent with some random comedy acts and cabaret at the top of the hill provided many laughs.

I dragged myself away from the calm and cosiness of our own campfire to go and see the headline act, Ferocious Dog, and it was fantastic with a proper mosh pit down the front and quite a few people dancing giving it a real festival atmosphere. The Farmer Phil’s crowd are good at both partying and relaxing – definitely my kind of people. 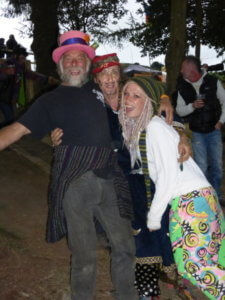 There was an incredibly relaxed vibe at Farmer Phil’s – everyone was extremely friendly and laid back. It felt like how I’d imagined the early days of Glastonbury to be – everyone just camped in a farmer’s field having fun. Dogs were allowed too but all dogs and owners were very well behaved, and the children loved having them around.

We met a lot of genuinely lovely people there – one time when a toddler wandered off the wrong way several people jumped up and one stopped her running down the hill while another found her mother.

Small festivals are always more friendly but this place just had the community spirit in spades. Everyone was so friendly, it felt incredibly safe. If you’re not comfortable with people drinking a lot, well, people drink a lot at this festival! But it was always amicable – more like your family at Christmas than anything too rowdy!

The festival coincided with the Perseid Meteor Shower – a natural light show that passes over every year and is good to watch away from electric light. This made Farmer Phil’s the perfect place to be, and many other campers sat out on the Friday night to watch. The sky finally cleared around 1am, too late for the children unfortunately, but we saw quite a few meteors streak through the sky to whoops and cheers from other campers.

Quite honestly, if you want to go somewhere for your children to experience nature in a relaxed and friendly environment you couldn’t do much better. Add to that some quality live music and a great crowd – Farmer Phil’s is a place to revisit that genuine old-school festival feeling. 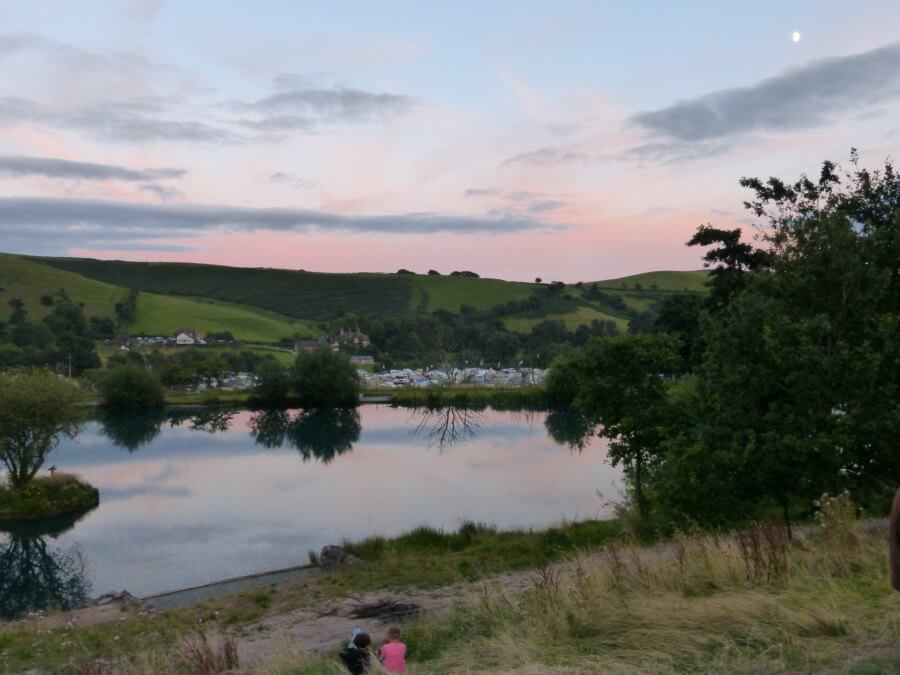