Emerging from Dalston Junction station on 6th May into blazing sunshine I had high hopes for our first festival of the summer, Land of Kids, the new children’s festival by the same artistic people that brought us the well-established Land of Kings (an annual music, theatre and arts event). It was an unusually bright and hot sunny bank holiday, perfect festival weather.

We were struck by how popular Land of Kids turned out to be for such a new festival – we arrived at 11:55am (for a 12pm opening) and there was already a substantial queue. You could blame the sunshine for such crowds but from talking to a few people there I discovered that the parents were interested in the event itself. They had all shared my own reaction on hearing about it – that such a festival for children was an exciting and intriguing idea. Many parents had become disappointed with the commercialism of festivals and events, especially the rise of cBeebies characters in the kids’ fields, and wanted their children to become involved in more creative and imaginative activities.

There were clearly a few administrative hiccups for the first year, as we had to queue for an hour for entry. However there was plenty to occupy the children as the queue went past many of the attractions, and my three children busied themselves chatting to a mad hatter with a tail, excavating the dressing up box, and watching the scooter painting (children scootering through paint onto paper!)  Some parents with younger children hadn’t brought food and faced the additional problem of the queue being at lunchtime with no child-friendly food available – however this is an issue that can easily be fixed for next year.

Once we had queued, attached our wristbands and booked onto the workshops, we were free to explore.

We headed straight for the Lost & Found Pirate School as my children love to be pirates. Here they were taught all the requisite pirate skills – how to say ‘Arrrrr’, how to make their own eye patches, how to scrub the deck, walk the plank, and various other silliness which was the highlight of our day thanks to some fun and incredibly enthusiastic pirate players.

One of the twins was dressed up as the designated shark and had to chase the other pirates when they fell into the water which made everyone laugh as she was so small.

After that we looked through the various craft workshops on offer. There was something to interest all older children (decorating shoes, making cardboard cities, knitting handbags, sewing, painting, making things, the list goes on) if only two of our children weren’t so young we could have spent ages here. My six year old, Eloise, and I headed off to our pre-booked place at Momma Loves’ Mad Hatter’s unbirthday party. There we sat around listening to stories, played pass the parcel, ate some cake and received a lovely ‘take home’ bag on the way out. Then we went back to another workshop run by Carousel where Eloise had seen children making sweetie necklaces and insisted on making one herself, and so we spent a happy time threading sweets onto strings (naturally I made two for the twins).

A quick note about the toilets: they were plentiful and clean so we had no problems there! (if the idea of festival toilets and young children is something that worries you, you may be interested to read my recent blog post on the subject)

We also visited the bar which sold lovely fresh fruit slushies – we bought a strawberry one for Eloise and a beer for me and set off to find the rest of the family.

We found them in the Eastern Curve Garden which was where the festival came alive. The garden itself was a tiny green oasis of calm. A variety of plastic and metal containers had been set out and turned into an impromptu drumming session, and with some direction from a drummer the children were transformed into a samba band. As we relaxed in the sunshine I felt that the festival season had truly begun. I went to look at lunch options at the street feast market, and this was nothing short of spectacular. There were so many choices of quality food and in the end I chose a buttermilk chicken burger with Korean hot sauce and coleslaw – honestly the best chicken burger I have ever eaten. Sadly, the options for young children were limited (probably because the street food on offer was designed with adults in mind) so in the end the kids had chips (wonderful skin-on chips but still chips) so I hope that next year this can be addressed.

More workshops were going on in corners of the garden – there was a group of children learning how to create seed bombs and another group getting a gardening session with little plants to take home. Everything was included in the price of the ticket which was a brilliant idea as you could say yes to your children the whole day – to face painting, nail painting, gardening and sweets!

Eloise and I wanted to go and play in the House of Hot Breath‘s underground bunker – everyone danced on the stage in front of a green screen and were projected up on the walls with special effects which was very exciting for all the children. Then we went to see what was happening on the main stage and ended up in a barn dance with the whole audience (performed by Cut-A-Shine Ceilidh). Unfortunately this meant that we missed our slot to see Punchdrunk – as much as I would have loved to see them my children didn’t want to leave the barn dance and it was their day.  I’ll just have to wait to see their adult show in September. 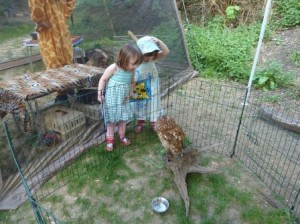 At this point it was getting late so we decided the last stop would be the Kigu Zoo. This was a definite highlight as they had so many animals that the children could hold, feed or stroke, so was accessible for the three year olds. They were particularly fascinated with the owl while Eloise loved the tarantula. And they all loved feeding the rabbits.

We couldn’t help stopping for a last dance at the main stage to Sink the Pink, who were doing UV aerobics to pop music with all the children copying. The kids just can’t resist a bit of Gangnam Style.

It was a shame that we had to go home at 6pm and miss Disco Loco. The children were just too tired by this point and we reluctantly made our way back to the station. It is the sign of an excellent festival that there was so much to do that we regretted leaving and missing some of it. I only hope this is on again next year – and next time I’ll be first in the queue! 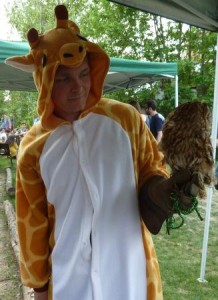 One thought on “Land of Kids 2013 Parent Review”