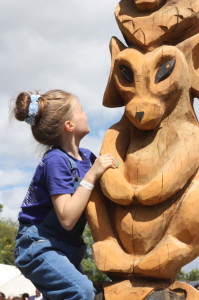 It’s the day after our visit to Lunar festival and I’ve just asked my 10 year old daughter to sum up her experience. Her response was “unique, exciting and awesome”. I have to say, I would pretty much agree with her. We had a wonderful day.

This year was the first time that we have visited a festival just for the day, and I would certainly do it again. There is something quite lovely about waking up in your own bed, taking your time over breakfast and not having to pack and unpack half of your house before you’ve even walked through the entrance.

Going for the day meant that we packed in as much as possible into twelve hours.

Car parking was close to the festival site. It took five minutes to get inside and start exploring. The children were delighted to see a helter skelter in the middle of the site, which was a reasonably priced £1 a turn. We saw many more changes to the site, including a newly built Crow bar, which was a bar and mini stage area. There was also the Bimble Bar, a huge canvas structure which is fully lit, including a stage with a LED custom lighting rig, which unbelievably runs on less energy than a kettle. This provided ample shade from the sun and had the fantastic addition of several double beds along the side of the tent; a perfect place for allowing the little ones to have a rest in the middle of the day.

The festival site still felt small and intimate, with one main stage and a couple of other areas with tents for dancing and food stalls. This allowed my daughter and her friend to go exploring and I felt confident that they could do this safely.

As of last year, there was a bonfire in the middle of the festival area, which provided warmth and a central place to meet with friends. This was surrounded by logs to sit on, which created a natural barrier as well as convenient seating. One Dad had the genius idea of bringing along marshmallows and wooden skewers. I am copying that next year.

The majority of the children’s activities took place on a field to the main festival site. This area seemed to be much bigger than 2014. There was a varied programme of activities for children of all ages, including slacklining, sports, lino printing, letterpress, pottery, hanging garden arrangements, guerrilla archaeology and storytelling. Most of the activities were free of charge or donation only. Paid workshops included felt making and turning records into clocks and mirrors. Teenagers could have a go at wood carving and blacksmithing.


A highlight of our time in the kids’ field was the slightly surreal laughing yoga session, although there seemed to be more adults than children taking part.

There were also plenty of activities open to people of all ages, including drumming, ska aerobics, Bhangra and Northern Soul dancing lessons, which were very popular. The kids were still singing Northern Soul classics in the bath when they got home.

Whilst the family area seemed to have grown since last year, the number of food stalls seemed to have decreased. Last year there was a strong representation from local street food stalls, but this year it seemed to be the festival stalwarts who were present; the Bhangra Bus, a pizza stall, toastie stand and a vegetarian stall. All of these were very tasty, but it did seem like a shame to lose that local influence. However, all local ales and lagers were provided by Purity Brewery for £5 a pint. Late night cups of tea were very welcome and cost a reasonable £1.50.

There were several food options available for children, including toasties, pizza and savoury pancakes from the pink moon cafe. The ice cream van and smoothie bar also looked very popular.

The weather was much better this year, which made access around the site a lot easier. I saw several families pushing children in pushchairs and wheelchairs around the site without any difficulties. The site is largely flat and compact.

The festival had introduced a quiet camping area and a quiet family area for this year. I spoke to a few families who told me that although it wasn’t totally quiet, it was fine. This is a big improvement from last year.

Children were able to access the Umberslade Farm for a reduced price, which provided some peaceful time away from the music and the chance to meet animals and ride on tractors.

There were plenty of toilets and they also had hot showers in the family camping area. I didn’t really have to queue at all so the numbers were about right. The toilets appeared to be maintained to a higher standard than last year, although some did run out of toilet roll around 6pm. Some sinks were available on the kid’s field and in the family camping for hand washing.

There were plenty of bins on the main festival site and there was hardly any litter on the floor. I did not see anywhere in the main festival arena for recycling, which given the efforts that Lunar have gone to prevent energy wastage and reduce carbon emissions, seemed to be a shame.

Again there was a lot of sixties/ seventies psychedelia and prog rock going on. Not a lot of it was to my personal taste, but I think that the eclectic mix of artists led to an interesting mix of festival goers. There were lots of families and older people, but not many lively teenagers which gave the festival atmosphere a calm, laid back atmosphere.

Musical highlights for us included Mark Radcliffe’s band, Galleon Blast, who played sea shanties, accompanied by some rather enlightening dancing by an original hippy from the audience! Saturday night headliners Public Service Broadcasting, played a great set and was a wonderful end to our day. I know that we would have loved the Bootleg Beatles were playing on the Sunday.

Because of the small size of the festival and its overall chilled out spirit, I met both Public Service Broadcasting and Mark Radcliffe later in the day, who were happy to chat to the audience and sign autographs for fans.

Lunar appears to be going from strength to strength and has gained a loyal following across the Birmingham Community. It is a pleasure to see it grow and develop, whilst maintaining its welcoming and joyful atmosphere.

See our fact sheet for more information about the Lunar Festival.