This year we kicked off our festival season with a trip to Wychwood in Cheltenham. It’s been on my festival wish list for a while now and I’m pleased to report that it didn’t disappoint. Despite torrential rain just before we arrived I was immediately struck by how friendly everyone was. Our Sat Nav somehow managed to take us to a trade entrance but we were cheerfully pointed in the right direction by some rather damp looking stewards and soon had our wristbands on ready to go. 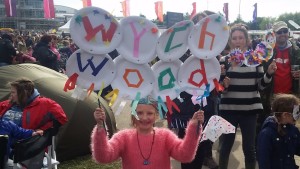 Wychwood takes place on Cheltenham racecourse. The surrounding cotswold hills make a beautiful backdrop and although it lacks the wild countryside appeal of some festivals, it makes up for it with convenience. The site is very flat, with good paths and barely a puddle anywhere despite all that rain. Apparently building work on the new grandstand had restricted space a bit this year and the main area was very compact, but even on Saturday, with the sun shining and lots of day visitors, it never felt too crowded.

Setting up camp was also remarkably easy. There were several different camping areas including family, disabled and campervan fields. One thing people in all these areas commented on was the space. We arrived a bit later than planned but still had plenty of spots to choose from for our rather huge 6 man tent. By the time everyone had set up camp there was still space for kids to run around and it was nice not to be picking your way through a sea of guy lines after a late night loo trip! You can even drive your car right up to the campsite to unload, helpful as it’s a long walk from the car park. My only complaint was the long wait to do this. After arriving we sat in our car in a holding area for about an hour before we were allowed to drive into the campsite and I noticed a few people getting quite annoyed about this. The steward in charge handled it all really well and cheered everyone up, but apparently this happens every year for the family camping, so it would be good if the organisers warned people in advance. We ended up scrabbling around in our overstuffed car trying to find snacks and entertainment that we could have had ready and waiting. We could also have done with some toilets near the holding area – we were finally sent off to the campsite while I was away hunting for one!

The toilets at the campsite were pretty good. There were short queues at peak times but over the whole weekend I only came across two that weren’t clean and not one that had run out of loo roll! Pretty impressive. They were just the individual plastic portable type though. Given the number of small children I would have liked some child sized toilets or some with proper handwashing facilities. There was a set of showers which seemed to be shared by everyone but I never noticed any queues for them and for those wanting a bit more luxury you could even book a hot tub. The main festival site had plenty of toilets including some with proper sinks and a plentiful supply of soap and hand towels. There were hot tubs for hire here too and these ones had a view of the main stage!

There was a wide variety of acts on the main stage, including Boney M, The Proclaimers and Ladysmith Black Mambazo. The Undertones did a great set with a shout out to all the Dads with kids on their shoulders when they played Teenage Kicks. We also had a good dance to Electric Swing Circus. For Evelyn and Martha though the star was undoubtedly Justin Fletcher (AKA Mr Tumble) Who did a high energy, interactive show of well known songs and impressions from his Cbeebies programs. Even the grown ups seemed to be enjoying it.

Despite all that, we spent most of our time away from the main stage at some of the many workshops. We tried our hands at (amongst other things) belly dancing, playing the ukulele, clay modeling and circus skills. Evelyn was delighted to find Ashiyana Arts who we’d seen at Just So Festival last year. They led a Bhangra dancing workshop and an Indian storytelling show, both of which were captivating and came with dressing up opportunities. There was also a large tent for craft activities (great for hiding from the rain on Sunday) and a children’s literary festival with author talks that seemed to be drawing big crowds. For me this is one of the main reasons for taking young children to festivals. It might be hard work setting up camp but it pays off when they have such a dazzling choice of interesting activities to try. You could almost hear little Martha’s brain buzzing with all the new experiences. We could have just kicked back with a drink and watched them have fun, but we always ended up joining in too!

There was a good variety of food on offer at the sort of prices you’d expect. The Goan fish curry was absolutely delicious (£8 for curry with rice) and we made several trips to the Churros y chocolate van (£4). I didn’t see anyone offering kids meals but this wasn’t a problem as there were lots of fairly small options and a margarita pizza (£6) was enough for the girls to share. The spacious campsite also meant lots of people cooked for themselves. There were a couple of bars selling Hobgoblin ale plus lager and cider (£4 a pint) and another offering Pimms, prosecco and cocktails. None of these ever had big queues and I wasn’t aware of anyone who’d had a bit too much either. 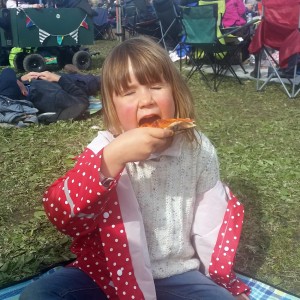 The whole Wychwood site is not only very flat, it’s also got lots of good, solid paths. Pulling our trolley along was fairly easy, even with two kids asleep in it. A couple I spoke to in the disabled camping area also commented on how helpful this was for wheelchair users. They rated Wychwood as one of the best for disabled festival goers and commented that the organisers had fixed a problem from last year by making sure that there was somewhere to charge electric wheelchairs at the campsite. Their only complaint was that the layout of the disabled camping meant that some tents were a long way from the toilets. In the main area there were disabled toilets and a special raised viewing area facing the main stage, a nice addition and one that added to the welcoming atmosphere. 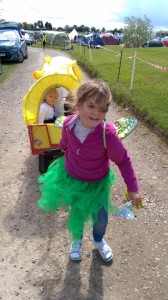 Overall we had a great weekend at Wychwood. It’s a small and very family oriented festival and most people seemed to be there with children. There were lots of groups of families and many people had been coming for years. As a result the atmosphere was fun but safe and relaxed. The stewards were a big part of creating this vibe and were universally helpful, cheerful and well informed. Heavy wind and rain may have given us all a good soaking on Sunday morning but it didn’t dampen anyone’s spirits and we left with the Wonderstuff playing an acoustic set behind us, a head full of happy memories and Wychwood firmly on our festival wish list for next year. 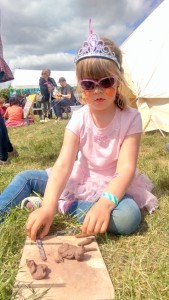 For more information on Wychwood, please see our factsheet here.