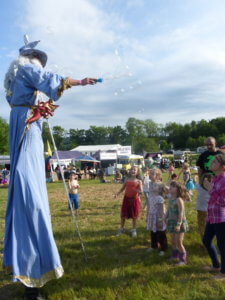 Alfresco Festival is one of those rare little gems in the festival community that provides something a little bit different for families. Just over an hour from London you can get real old-style raving as well as a true back-to-nature experience. With a few teething problems that could easily be ironed out, it has the potential for being an exceptional offering for families into electronic music.

Alfresco is an unusual festival in that there are no live bands at all, only DJs. In fact it describes itself as a “family rave” which is an accurate description.

The problem with this is that it’s difficult to get the balance right with these two festival types. Talking to a few other parents over the weekend the common consensus was that Alfresco needs to decide whether it is a rave or a family festival.

Our family had a fantastic time but we stayed away from the stages and spent most of out time in the back field and the campsite. Having such a large amount of space for children to play was a huge bonus, and the size of the festival meant that the children could safely go off on their own in groups, which they enjoyed far more than having to stay together in the larger busier festivals. In fact the whole event felt to us more like a family holiday.

The campsite was one largish field with loads of space. That was great as all the children ended up running around together, kicking a ball or throwing a frisbee – in fact they spent much more time outside having sporty fun than at other festivals!

The car parking was right next to the camping field which meant that setting up and packing up were a breeze, and this was a big plus for families.

The only low point were the toilets – there were not enough in the campsite and they filled up very quickly making them unusable. We were lucky having a caravan but other parents had problems with this. They were emptied but not often enough. The toilets in the main site were acceptable, however they hardly ever had paper or soap.

The showers were great at certain times – I managed to have a lovely hot shower at one point – although the water supply wasn’t always on.

Caravans were offered an electric hookup for an extra £125 – however they all ended up having to crowd together at the bottom of the field with not much space. We parked our caravan without electricity at the top of the field and found that much better.

As soon as I arrived at Alfresco looking lost, someone asked me if they could help – always a good sign at a festival. She helped point the way to the campsite and then explained she ran the Nanny Yurt, which was running babysitting sessions throughout the festival. Of course my ears pricked up – an opportunity to do some dancing. The Nanny Yurt ended up as the star of the show for us. When they realised there were very little free activities on offer for children (and none under cover in such hot weather) they opened up the yurt to all children in the afternoons. This meant that the children had somewhere to go where they could read books, colour in and paint – and they loved spending time in there, which meant that we didn’t have to keep spending on the paid activities. 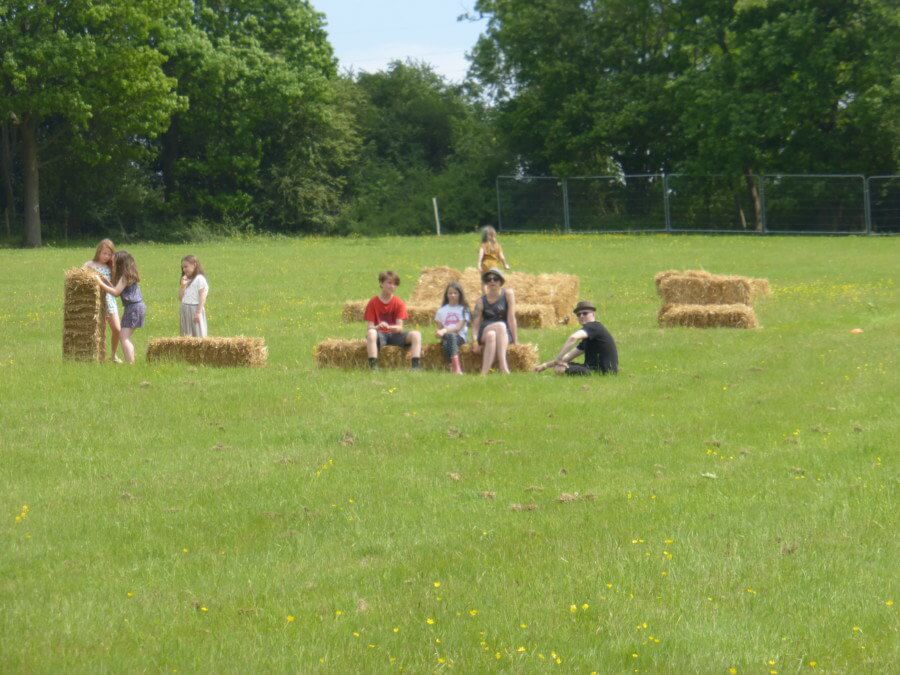 We decided to try out the 8pm-12am slot at babysitting – at £40 per child it sounds expensive but when you think about it, it’s about the same as a day at a holiday club. The great thing about this was that in such a small festival they didn’t have to keep them in the yurt – so they spent most of that time outside jumping on hay bales, watching the story telling, and then snuggling up together to watch Peter Pan together. The children announced that it was the highlight of their festival, and were desperate to keep going back – they loved the nannies there so much they didn’t want to leave! It allowed us to go and listen to some of the ‘noisy’ music, get some food and just generally relax.

The best entertainment for families were the storytellers and jugglers – all of whom were top quality and adults enjoyed almost as much as the children. The storytellers were amazing and enthralled the children – I would go back to Alfresco just to see them again. 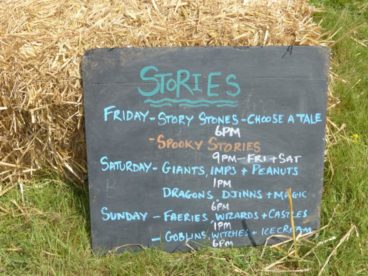 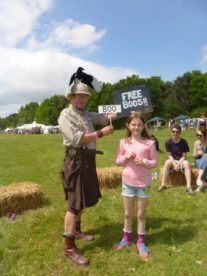 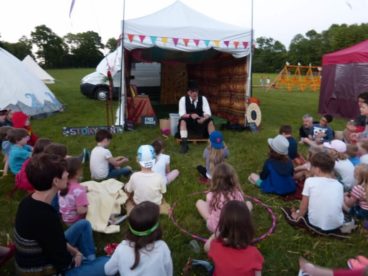 However because that was the only free children’s activity we found that some of the acts repeated so we ended up seeing one juggler, Dan The Hat, do the same act three times. Having said that he was a complete star – genuinely hilarious and many of the adults gathered round to watch his act. At one point one of my children wanted to go to the toilet and started ‘dancing’ (that point where you know they’re going to wet themselves!) and he noticed my trying to persuade her to go – and then he told her he’d stop the performance and wait for her! A real class act. One of the funniest moments was when he cycled a tiny bike through a gauntlet of children with acme-style gloves! 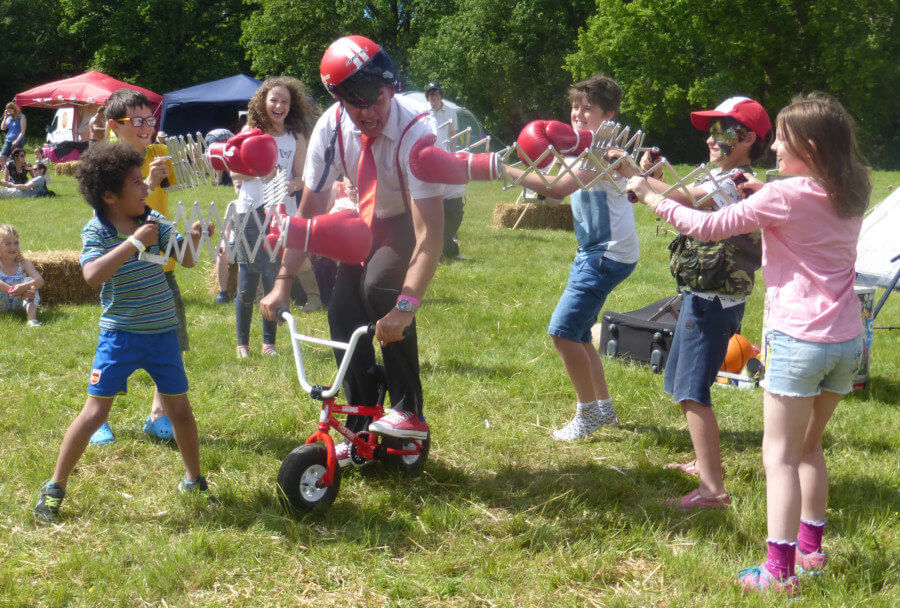 The storytellers were brilliant – and the children were happy to go and watch them again and again. The last stories of the day were evening ‘spooky stories’ followed by a brilliant fire breathing juggler which was a great way to end each day.

As the other thing they mostly wanted to do was to go on the swing boats even at £2 per child – with 3 children it did cost us quite a bit in the end. It would have been good to have some extra activities for children. However there was a very large field with a football pitch, jenga and hay bales which kept the children occupied for hours and was an great way for them to spend a weekend.

For such a small festival the food was really lovely. There was the famous Cheese Truck serving up wonderful gooey toasties, a bus called Crust Conductor (with its own DJ and eating area) serving great pizza, as well as some Thai food and a wonderful pancake place. 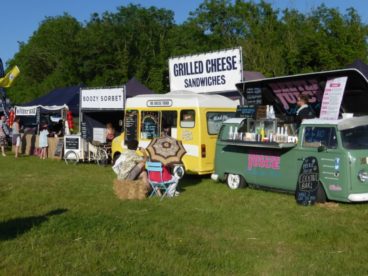 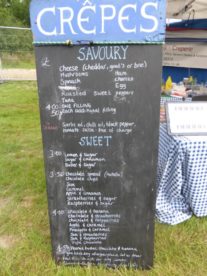 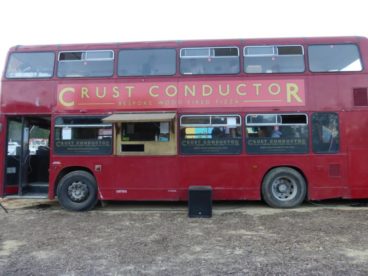 Pizza and a DJ! 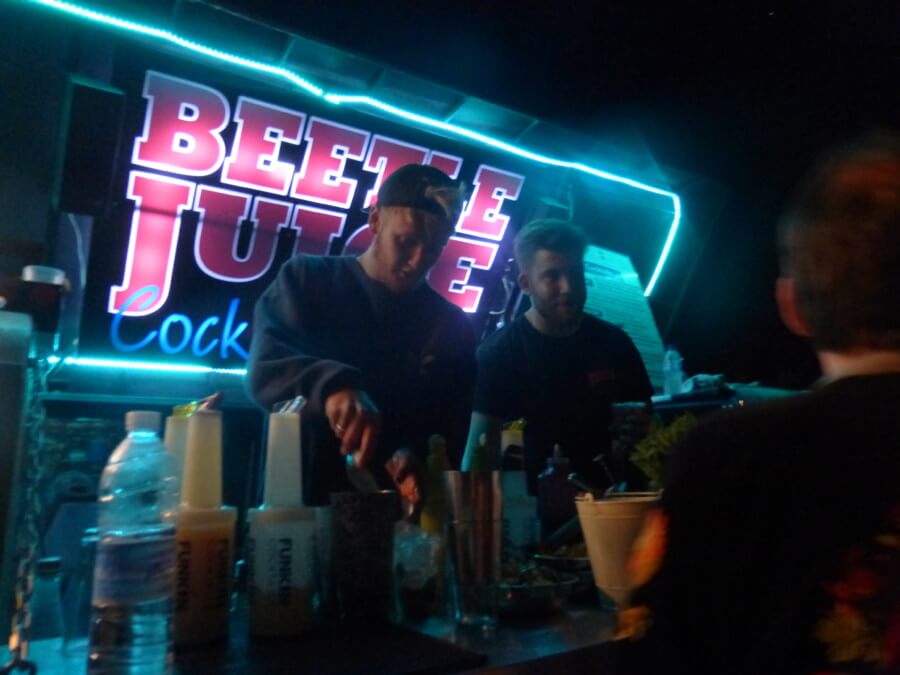 Apart from the pizza and pancakes there wasn’t anything that our fussy kids would eat – so the addition of some more ‘plain’ food would be good for families – but the festival is very close to the town anyway so if you were really stuck you could always go and get some. We loved the food and tried most of it – we also loved the fact that there was real beer and cocktails on offer everywhere, even in the woods! We even tried the gin slushies, and the proper cocktails served out of a classed VW van (called Beetlejuice – clever eh?) were very popular.

The music stages were far too loud for children – and they were too loud for me! Maybe call me an old fogey, but I still go clubbing and I have ended up dancing right next to the speakers before – and at this festival the whole dance floor was that loud. Because of this the children refused to go anywhere near any of the music. However this was where the joy of the Nanny Yurt came in. They offered 2 sessions of babysitting from 1pm-4.30pm for £35 or 8pm-12am for £40. We chose the later session as that would give us the opportunity to explore the festival at night. 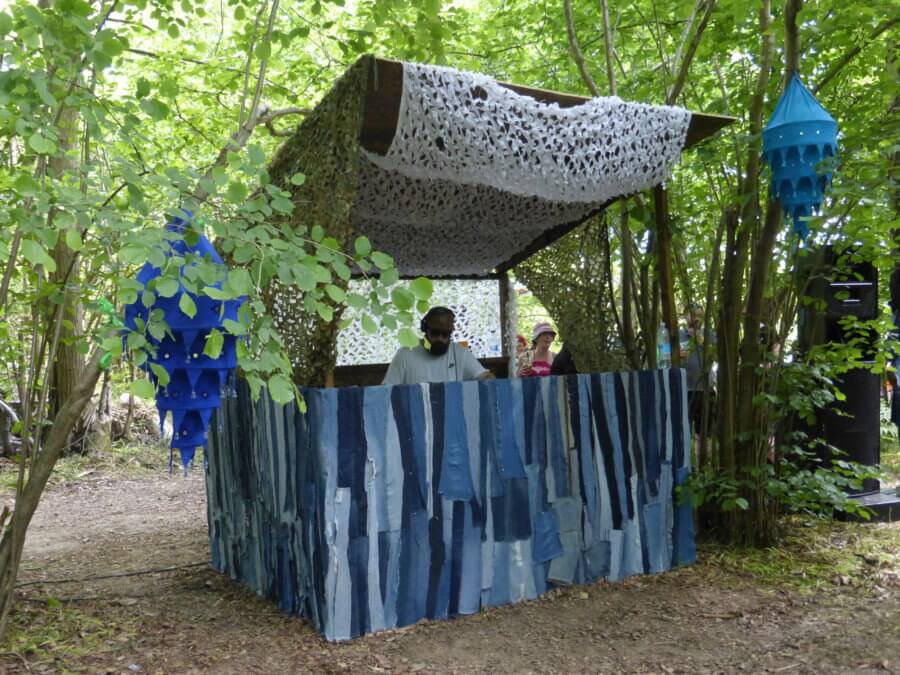 The music was great to dance to and there was a large variety of electronic music on offer. There were two stages in the trees both playing some fantastic music and one with its own bar including cocktails, draft ale and ipa! A little slice of heaven on a hot weekend. The artwork in the trees was wonderful, with coloured spotlights and decorated trees everywhere, which the children loved. 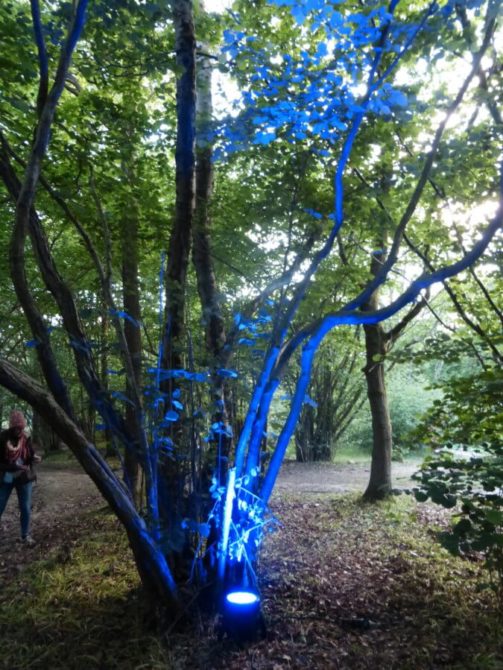 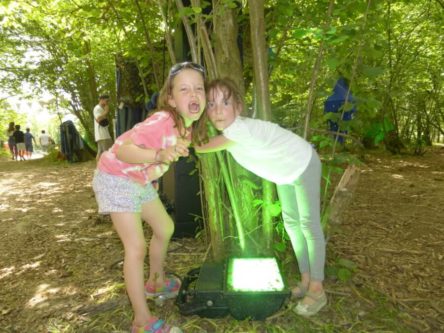 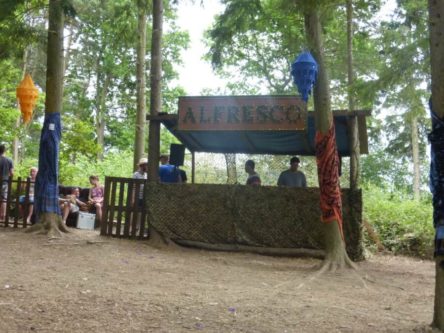 Considering we were only an hour or so from London the whole thing was beautifully back-to-nature. The children played in the dirt, climbed trees, picked up insects and jumped on hay bales for most of the weekend.

We were lucky with the weather – if it had rained there was not much under cover so the whole thing could have been a different experience. There could have been a few more sheltered areas which would have helped for shade or rain.

Would we go again?

YES! Our family loved it, we loved the music, we loved the space and the woods and hay bales. It gave the children the chance to spend some time in the wild. Just please from this old fogey – please add some more toilets, some more children’s activities, and please turn the music down (a bit)!