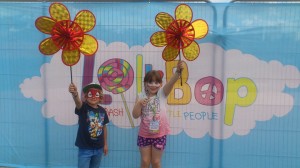 Review and pictures by Karon Bell

My little cutey couldn’t control his excitement when told of his extra special birthday treat:  we were the lucky owners of 5 VIP tickets to the LolliBop Festival, Sunday 18th August 2013 courtesy of Festival Kidz!

The sun shone brightly on my birthday boy (7), his little girlfriend (also 7), her lovely mummy, myself and my big boy (11) as we eagerly stepped off the tube at Stratford.  Have to say I’m very glad it did shine as the only negative part of our wonderful day at LolliBop 2013 was the trek from the station to the festival main entrance at Queen Elizabeth Olympic Park!  Thankfully our little peeps are of an age where they can walk easily and carry their own rucksacks, otherwise it would have been hard work for us.  I did hear a few parents and little ones groaning at the distance from station to the festival of about 30 mins walk… but our festikidz were thankfully running up and down the long road with excited grins of anticipation!

I believe it was a sell out Sunday but even so we had no problem accessing the festival site and there were lovely guides along the route pointing us in the right direction which was a nice touch.  As we hit the gates, I was very pleasantly surprised that it did not seem crowded at all.  We were soon inside greeted by a few reasonably priced stalls of novelty items, balloons, toys etc(all of which we ignored!!).  A vast array of kids entertainment lay before us.  The colours and layout of the activities was fabulous… well known kids brand names everywhere: Duplo, LittleTikes, Cbeebies, Mr Men, Peppa Pig, Transformers, Skylanders…

The children’s eyes lit up, there was so much to do and see, we were unsure where to start until we remembered our lovely LolliBop programmes/Lanyards in hand!  I had a busy birthday week previously and hadn’t had as much time as I would have liked to plan our day ahead, but our colourful lanyard had all the information we needed with times of acts, descriptions of what to do and where. 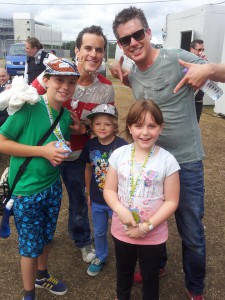 First stop (and one of our ‘Must sees’) we could hear Dick and Dom were already on the main stage at Lolli Arena and have to say they were awesome!! Crazy and loud as ever, causing mayhem spraying each other with water pistols and shouting to the little peeps in the audience, everyone was joining in with them and us parents loved them too!

As we were lucky enough to have VIP tickets, we took the opportunity to try and meet the lovely lads and amazingly almost bumped into them as they came off stage covered in bubbles and goo!! It was a photo opportunity not to be missed and our three children were almost as pleased as my friend and I were!

The next act was Hello Kitty! My birthday boy’s little girlfriend is a huge fan so we watched her on stage (although by this point it was very crowded) so we again were very pleased to be able to head off and get another meet and greet pic in the VIP area.  One very happy little lady!! Here we also ordered some lovely cold drinks to our table (heaven!) and for the children a chance to have fab free face painting and Duplo toys to play with was also an extra unexpected treat ! 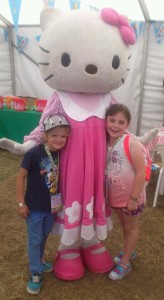 Back into Lolli Land, Mr Men and Little Miss and Shaun the Sheep had cuddles with us all and the boys were extremely happy with a Skylanders goody bag and awesome green screen photo each of themselves as a Skylander! Oh, did I mention free Haribos???!!! They went down too well!!!

There were queues for all activities but fortunately the weather was lovely and my friend and I divided our time between the children to queue wherever they wanted us to… Note that this wouldn’t have worked so well had I been on my own as I usually am as a single mum!

In the Lolli Arena, the River Island Design Den was on our ‘must do’ list as we had heard about it online! Free T shirts for our little ones to design and keep was too good to miss… It was to be a super activity but have to say the queue was about half an hour, maybe more. We passed the time eating our snacks with the little ones whilst my big boy excitedly ran off to a couple of other activities to see what he could find. He came back very pleased with himself just as we were at the front of the queue – lucky for him!! Also even luckier, he had taken part in a ‘Diary of a Wimpy Kid’ competition in Lollipalladium and won himself a sheet of stickers!! 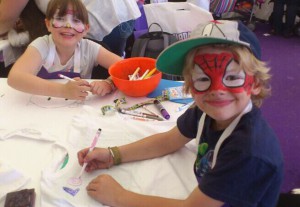 Back at the Design Den, the lovelies at River Island gave our little peeps a new white River Island T shirt and we were welcomed into the marquee filled with materials pens,glue and the children were asked to design their own LolliBop themed T shirt.  Well, they were in their element and it was wonderful watching then cutting and glueing and drawing their own imaginative pictures on their tops which they would wear for the rest of the afternoon. They were then photographed in their new Ts and all entered into a competition to have their design put to print…. The photo was lovely but the best bit was that they now all have a super free souvenir of their fab day at LolliBop!!

I didn’t find any of the queuing too much as I am a regular festival goer and my festikidz are used to this, but I could hear some unhappy people complaining that their children were missing out on other activities whilst waiting in the queue.  That said, my eldest son was also a little disappointed the Graffiti workshop was fully booked quite early on and by the time we got to Lalaloopsy and Duplo unfortunately they had also run out of goody bags but Lalaloopsy rallied around and found a hairband for our little lady which was appreciated!

The highlight of the day for us was the main stage Dick and Dom as mentioned and then of course Cbeebies Justin Fletcher. My boys and I had seen them all before at Camp Bestival and they were just as fabulous if not better at LolliBop!! Justin came on and the festival crowd gathered around, tiny children enthralled by his singing! The audience participation had to be seen to be believed!! As my friend and I sat and chilled in the sunshine,the children were up singing and dancing…it was lovely to watch them enjoying themselves so much!

Time passed very quickly through the day, there was plenty of space to sit and chill out and a huge variety of food and drink outlets, but we took a good picnic and plenty of water and managed with our own goodies,topped up with cold and hot drinks as we needed. I have never like the idea of queuing for food (this means missing out on the fun time)and like all festivals …this was also the case at LolliBop. I think we managed an ice cream late afternoon with not too much wait though – all birthday boys deserve an ice cream!!

My friend and her lovely little lady had never been to a festival before and as the day drew to a close, it was clear they were exhausted but extremely happy with their first festy experience. For days after, they were still talking about what a fabulous day they had and definitely want to go again. The same goes for me and my festikidz…

LolliBop 2013 was a first and was so much fun, there was plenty to do and clearly we had not even done half of what there was on offer through lack of time, energy, and a few long queues maybe… but that was not important. What we all did and saw and experienced was an action packed day full of giggles and smiles.  My little boy Lollibops and I will without a doubt be marking next year’s event as a ‘Must Do’ on our Festival Calendar 2014. 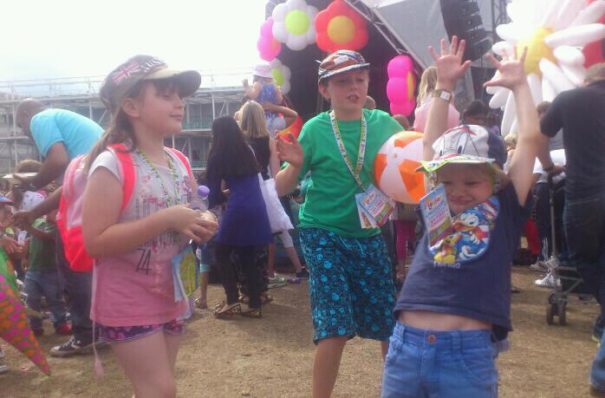 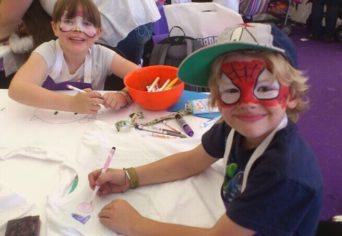 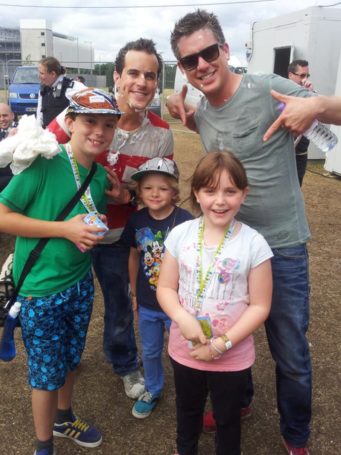 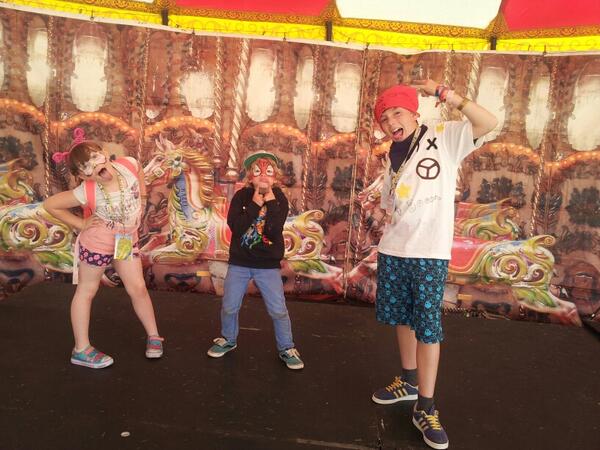 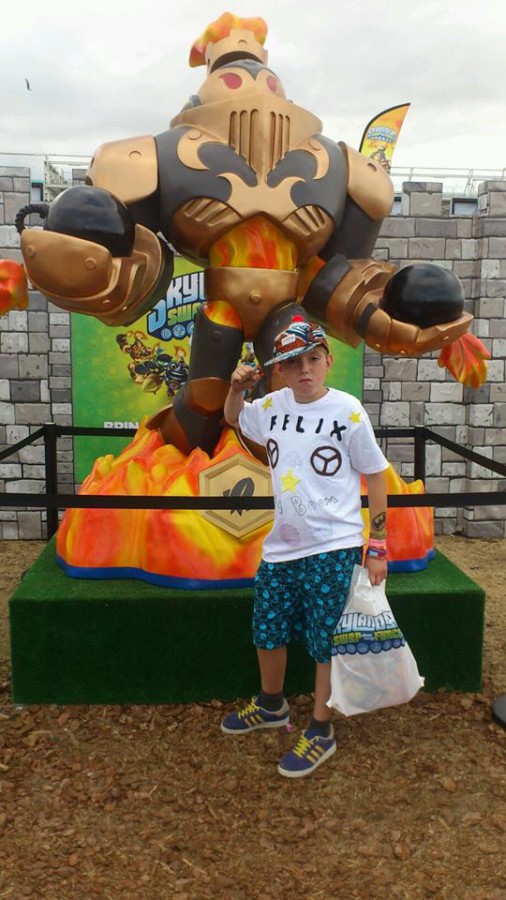 For more information about LolliBop see our LolliBop Factsheet.