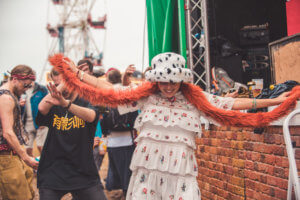 This was the 12th year of Farmfest, which next year takes a break. Perhaps that’s why in the pouring rain its faithful partygoers kept smiling determined to make the most of the festival’s special blend of great sounds and shenanigans.

Farmfest is for those who love their music and like to get down, kick back and cut loose. It is, however, primarily a grown-ups festival (the music goes on until 4am) that also caters for those who like to bring their kids along. It’s friendly, safe, has a good ethos and as a family we had a great time (despite the rain and an early exit due to a poorly tent). It was a good introduction to a grown-up festival for the kids and my nine-year-old LOVED the music.

With heavy rain over the two days we didn’t get to fully enjoy the beautiful setting in the rolling Somerset countryside, which I’m sure comes into its own in the sunshine.

Farmfest is a single field arena so everything is in one place, which makes it easy to get around and you can easily track down sulking tweens or inquisitive toddlers who wander off. 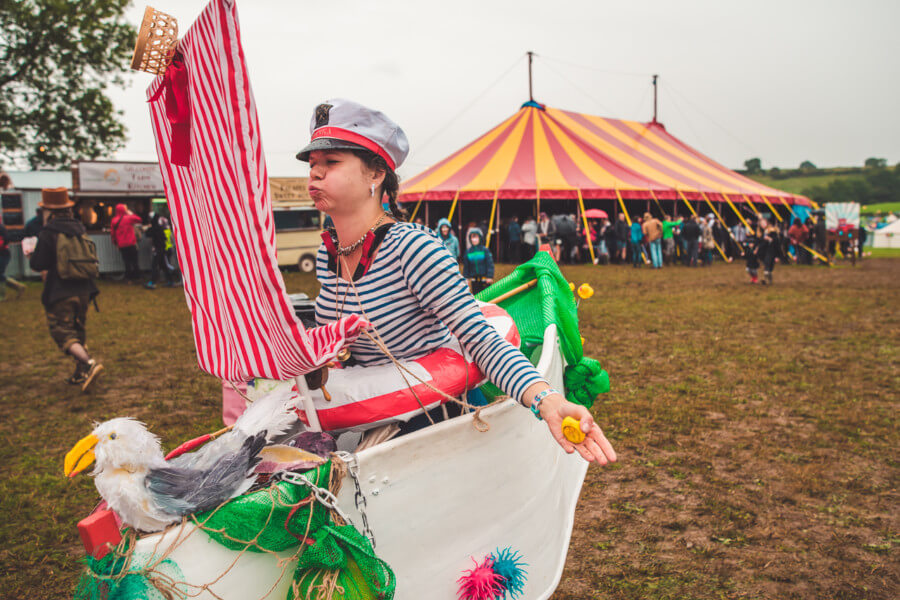 Arriving at the site was pretty straightforward on the Friday with well organised parking. But do get there early to ensure you don’t end up camping at the bottom of a slope. Our friend arrived at 10am to bag a great pitch next to the entrance to the main field – perfect for popping in and out with the kids. The family camping is a short walk from the car park and the festival felt relaxed from the moment we rocked up. Most of the other campers were families with quite young children. There were a fair few tiny babies but also some tweens. You can hear the music at night though, it’s loud and goes on into the wee hours so bring earplugs if you need your sleep.

If you want to pitch in the main camping area you have to go through the main field but I’d definitely stick to family camping with a lot less late-night returning revellers.

It was hard to fully appreciate the Main Stage during Friday and parts of Saturday due to the weather but Roots Manuva’s set saw it come to life. We caught snatches of acts but due to downpours didn’t get to hang around for too long.

We sat on cushions in the Big Blue tent during the day listening to some great live acts – including some delicious electronica. It did get a little loud so ear defenders were needed for the seven-year-old.

The Sett had a bar and got busy when acts were on. We took shelter in here from the rain but early in the day there wasn’t anything on.

The Den had a great line up of DJs and had a lovely feel inside. I managed to get away to see DJ Yoda but as the rain had forced everyone inside, despite a fantastic atmosphere, it did get a bit tight to dance. Earlier in the evening we had a great time with the kids and some top dancing tunes – the kids completely revelled in the fun atmosphere. There were babes in arms (or slings) with ear protectors on and parents throwing shapes.

There was also a small acoustic tent, a dub tent (which came to life at night) and the Palladium – which hosted comedy and poetry.

We loved the steam train stage, which was guaranteed to put a smile on our faces – no matter how soggy we were. Always a great crowd and sounds.

The Kid’s Kingdom catered for little uns. It’s perfect for  pre-schoolers and kids up to about 7. They had puppet making and other activities and an animal boogie disco.

There was only one fairground ride, a big wheel – which was £2.50 a go. There was also a small bouncy castle but the kids were too big to go on. 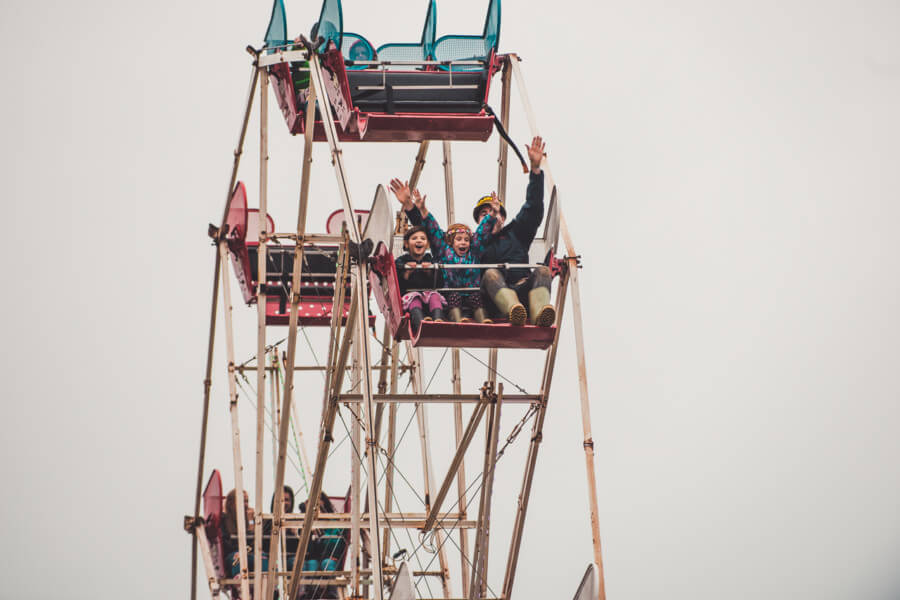 The circus skills area in The Green was a real hit with all the kids and we spent a fair amount of time there. There was also crazy golf – which my boys loved. But it was after the fifth round in the rain when my seven year old swung his small club and hit an unsuspecting bespectacled boy on the forehead – full whack – that I began to wish there were more things for little people to do.

We joined in the dance class and zumba in the Studio 50 Field/tent and thoroughly enjoyed the hat making session, which really got the creative juices going.

On early Saturday morning we took shelter in the Palladium tent and when a woman arrived with board games we were hugely grateful. We had a good couple of hours playing games and hanging out there. Free bloody marys were handed out around lunchtime as part of The Hangover Cure event but we moved on due to the ‘slightly adult’ content.

There were plenty of people dressed up during Saturday and we saw some great head gear for the hat parade on Saturday afternoon. The kids also loved the exotic animals dotted about the site, which included plastic flamingos, a paper mache zebra and several dayglo dinosaur skeletons. 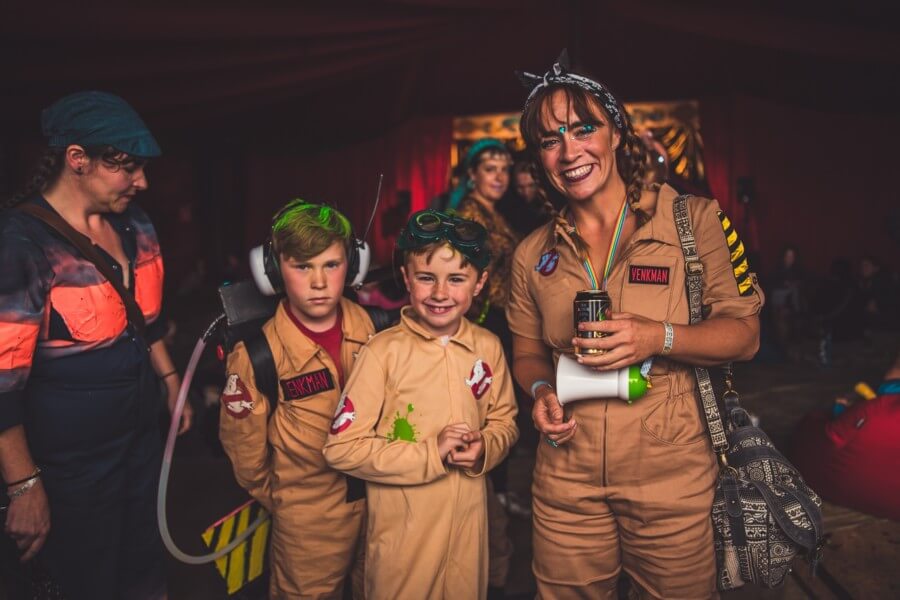 We also spent time in the lovely teepee run by Love Specs – a charity that works alongside Malawian communities – it was a cosy hang-out for the kids.

There were a selection of independent stalls including face-painting. Most were reasonably priced and we picked up a glow in the dark dinosaur tail for a fiver (bargain!) and a black sequin blazer also for a fiver and John Lennon-style sunglasses for £3 – which the kids were more than happy with.

Food-wise, we felt there could have been more of a selection. What was there: pizza (always a hit with the kids), fish and chips, crispy fried squid, vegan curries, hog roast and waffles, were at usual festival prices. We heard a few grumbles about the big queues and no cutlery on the Saturday evening.

Local brewery Wild Beer had pitched up in the main field and had a rooftop to sup and take in the views of the festival. 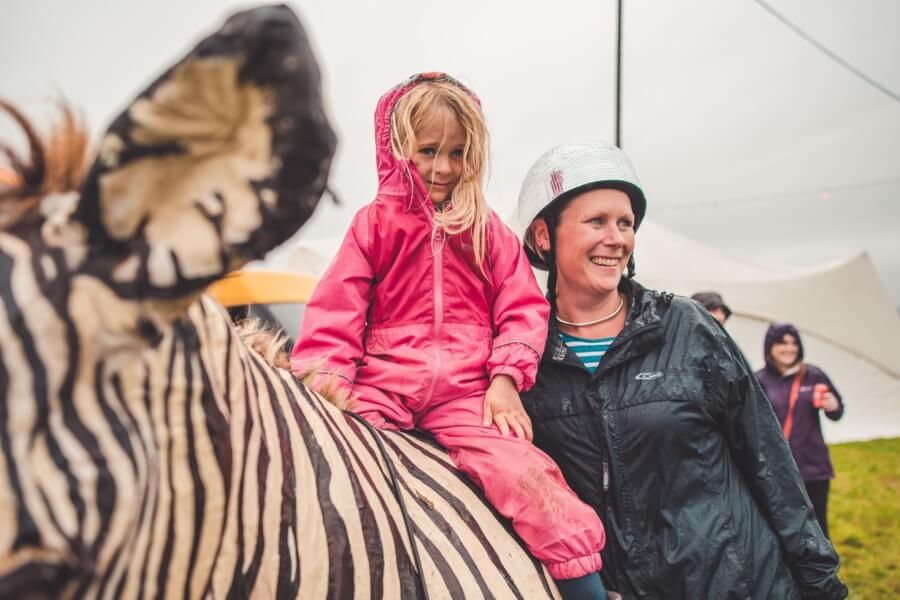 All the toilets were long-drop compostable (which earned eco-points from the kids – there were also lots of recycling points). Sinks were located near to the toilets in the camping area and there were water points in the main field. There are no showers though (it is only two days). There were baby changing facilities in the First Aid tent.

It’s not hard to see why Farmfest draws a lively and faithful crowd. It’s small (5,000), reasonably priced (£65 early bird adult ticket, kids under 12 go free) and has a laid-back, simple party vibe without the corporate feel of bigger festivals where you leave with much lighter pockets.

This festival is all about the music. Despite a very wet weekend – rain certainly did not stop play. And we had some memorable moments dancing in the rain. We wish there had been a few more daytime activities, although this may not have been as much of an issue if the sun had been shining. It’s worth bringing stuff with you to keep the kids entertained – it will help whatever the weather. If you love music this is a great way to kick start the summer.

For more information on Farmfest see our factsheet here.