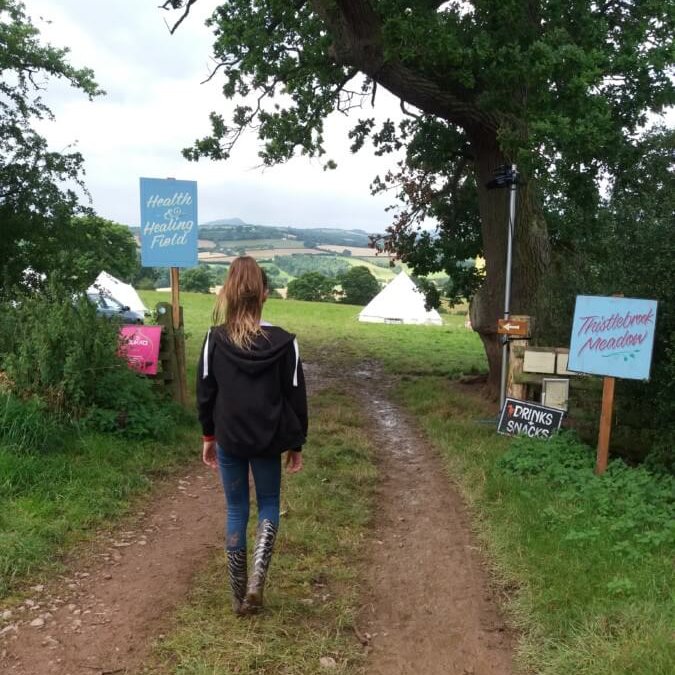 This was my family’s first time at Starry Skies. When I showed my two children the Festival website they were both immediately sold on it. It is a beautiful family gathering, close to the Welsh border, with the main emphasis on encouraging children to enjoy their natural habitat. The event is exclusively for families, predominantly those with young children. There are generally about 250 families attending Starry Skies each year. 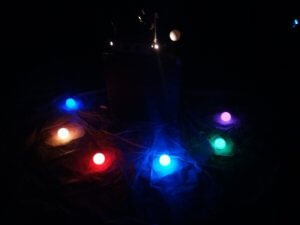 Starry Skies gets its name from the lack of light pollution in the surrounding area. The festival is in Kentchurch, which has a glorious view of the nearby Brecon Beacons. The Brecon Beacons National Park is renowned for the number of stars visible to the naked eye.

Steve was on site with his portable inflatable planetarium. We were lucky enough to get one of the limited spots for his exhibition. We learned about how the Ancient Greeks mapped out the skies by joining the dots of stars, forming constellations which we still recognise today. He also told us how to locate the North Star, in case we are ever lost at sea! It was an excellent display, with Steve managing to engage even the tiniest of tots with his astronomical wisdom.

There were three main camping areas, all well organised and quiet enough at night. We were allowed to pitch our tent in the campervan field, close to most of the activities. The second campsite was adjacent to the car park and handy for forest school, farm tours and foraging. Cobblers Grove was inbetween two wooded areas, and fantastically located for the play areas in the trees. One play area included an array of wooden climbing frames, swings and monkey bars, while the other had a great climbing net which was always busy with children.

There were many showers and plenty of flushing toilets which were very clean by festival standard, with the toilets replenished with soap and paper daily. A note was on each block asking if stewards could be kept informed if the toilets were out of supplies or needed cleaning. The only times I found them to be out of paper was first thing in the morning, so I assume also last thing at night, which is fair enough in my book.

I was bowled over by the number and range of exciting workshops and games timetabled for children. The structure was especially impressive with each age range having a number of allocated areas. Of course these were only a guideline as friendship and family groups would often choose to stay together. The toddler area in the woods looked enchanting. Their activities included bread making, which my thirteen year old would have loved but was a bit too busy to ask to join in as a helper. They also made beautiful forest art, and had a great sensory walk through area for those happy to go through barefoot. Babies could enjoy yoga, massage and singing sessions. In one of the camp sites there was a baby bathing tent. I don’t think I was the only grown up to be jealous of their bath time! 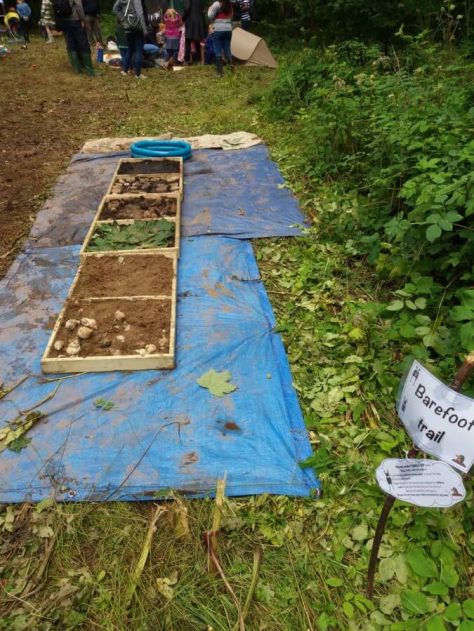 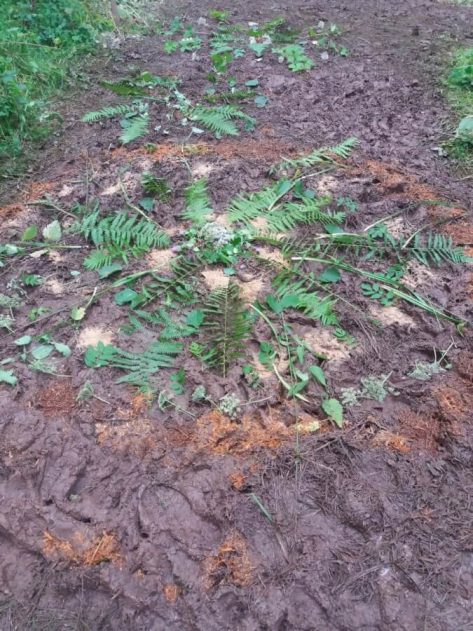 This was a hugely popular and superbly organised feature of Starry Skies. The classes were split into four different age groups, spread over the whole day. 2-5yr olds stayed in one area with several hour long classes running over the course of the day – extra classes had to be added due to the unprecedented high attendance. Older children were divided into 5-7 yr olds, 8-10 yr olds and 11-17 yr olds, with a two hour session on offer for each age group every day. My children are 9 and 13 yrs, but both attended the middle group as they wanted to stay together which was fine with the group leaders, Ian and Trish.

Their forest school session started with a warm up activity of spending ten minutes finding foliage with which to wrap a fresh egg. The children then took turns dropping their egg from above their heads into a flat rock, hoping that they were protected enough to remain intact. (Not many survived!)

Most of the lesson was spent following a trail around the forest collecting anything of interest. When the children got back to base, they were split into threes and given saws to cut a memory stick (after safety rules had been demonstrated). They were then shown how to use a sharp knife safely to shave the bark of their sticks and then sand them down. All the exciting finds from their walk were then attached to their memory sticks with an elastic band. They now have gorgeous keepsakes to remind them of a day well spent. 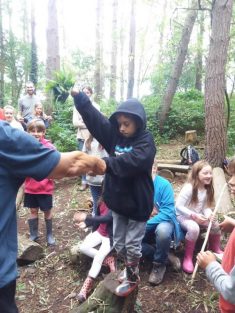 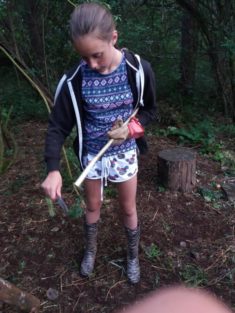 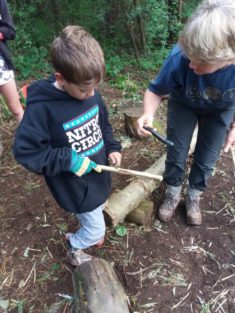 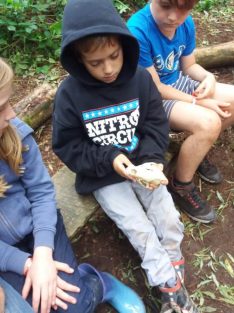 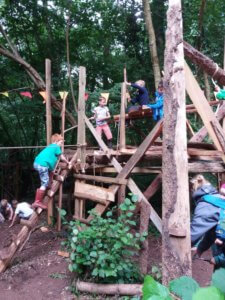 The exceptional Woodland Tribe were on site in the Starry Skies woods every day, providing their own unique taste of outdoor fun. For a suggested donation of £2, families were provided with everything they needed to make their own climbing frame. Wood, nails, a saw and a hammer and some trees along with as much or little support is all that is needed to keep children entertained for hours on end.

This was the fifth Starry Skies. In my opinion it has achieved everything it has set out to accomplish in providing for young families. Due to its success and popularity, it has acquired a very loyal following with guests returning year after year. The children are obviously getting older, and while they may be ready to graduate to sister festival Shambala they also don’t want to give up Starry Skies.

Teens and tweens can have fun all around the festival but are specifically catered for in The Burrow. Here they can take part in amazing adventures such as fire, circus, bushcraft, building and FLYING! The Burrow’s weekend experience culminated in an awesome display of bravery and prowess with children leaping through a ring of fire. They had a huge crowd for this and will have this wonderful memory to wow their peers with for many years to come. 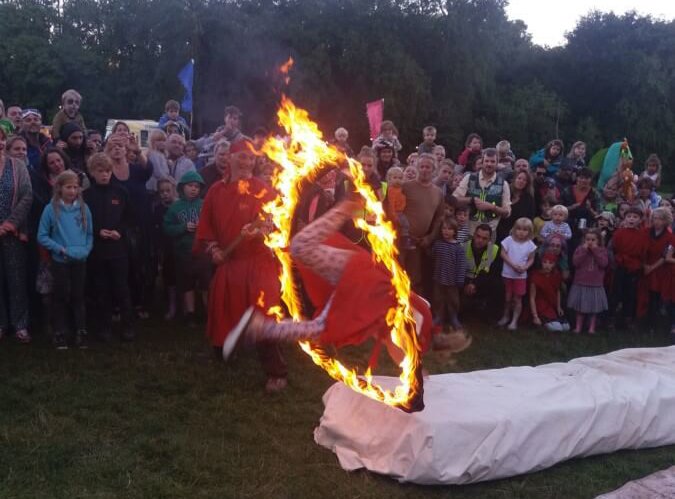 Three times a day, as many people as possible were herded into a tractor trailer, and towed down the bumpy track to meet the animals at Barton Hill Farm. We were lucky enough to be there to meet numerous piglets who were just nine days old. Some children even got to stroke them! The Starry Skies staff were super helpful with getting my son’s wheelchair on and off the trailer. When one of them spotted his John Deere hat, he even arranged for him to sit in the driver’s seat. (They didn’t trust him to drive it though!) It was definitely one of our best bits of the festival. For those that didn’t make it on the farm tour, there was still a chance to meet a cow, which was brought up to the main site. 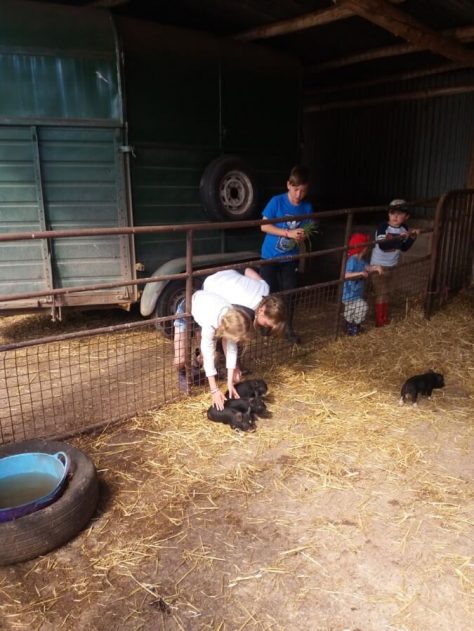 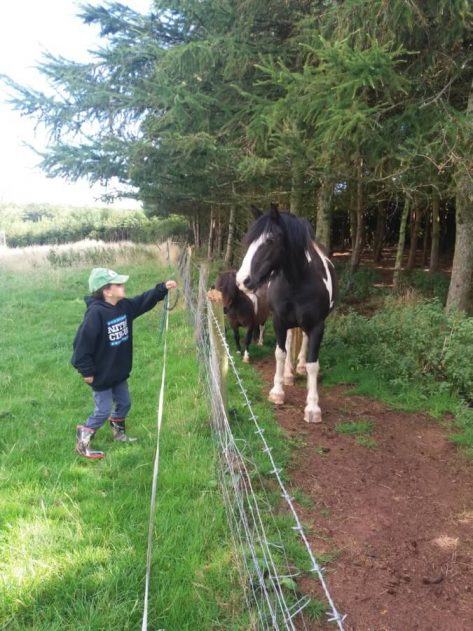 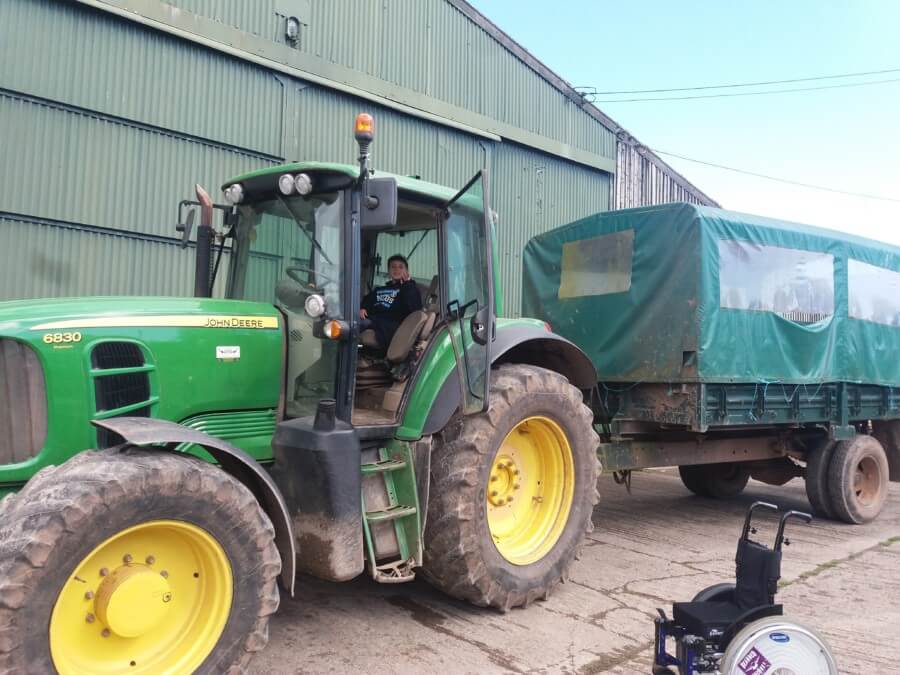 Other activities included clay play; story telling; a drum workshop; ping pong tournaments (one for adults, one for children); baby yoga; discos; family raves; foraging ramble; circus skills; football and many many more. In particular, one of the main events was the Saturday Sports Day. Children took part in events such as waiter races, carrying trays of glasses, and sponge races. It was all great fun.

My son especially enjoyed the football every morning and afternoon, and found it a perfect way to form friendships. My daughter’s favourite bit of organised mayhem was the huge slip and slide set up on the Friday afternoon. They were even lucky with the weather while that was on, although I don’t think the rain would have put many off! 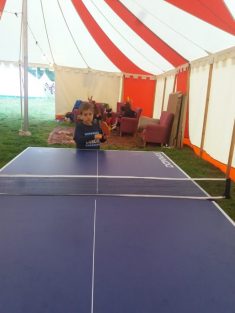 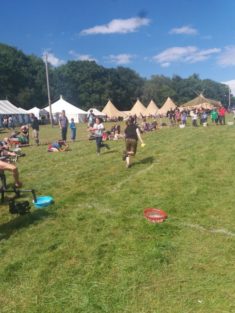 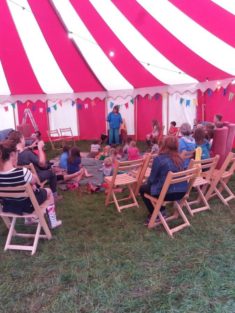 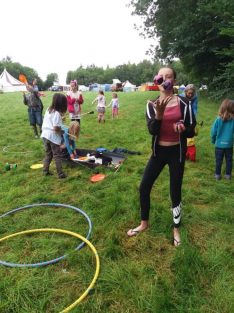 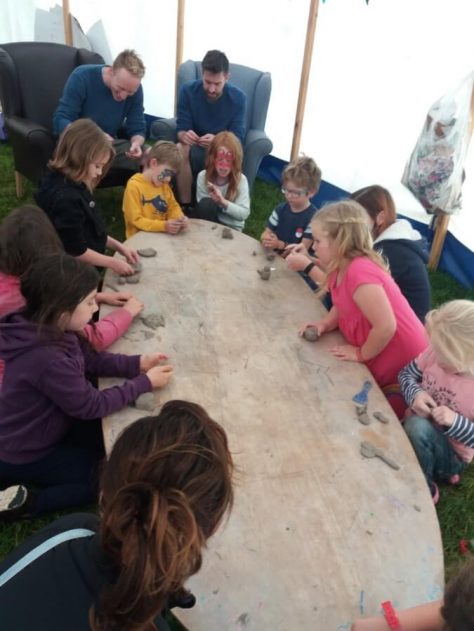 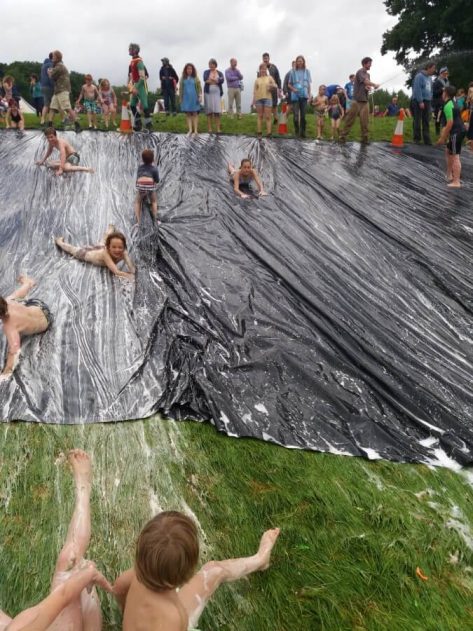 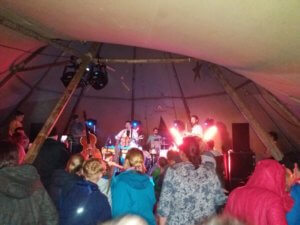 There was live music in the bar every evening from bands such as Boudica Boogaloo and Paper Moon Band. It had the friendly feel of a wedding reception, or similar function, rather than that of a larger music festival. They were all excellent artists, getting everybody on their feet. Each night the live music was followed by a DJ from 11pm until midnight. (We were always asleep by then though, exhausted from the day’s pursuits and preparing for the next round!)

From 10pm each evening, there was stargazing led by Steve (who also had the inflatable planatarium). Unfortunately, they weren’t too lucky with the weather, so didn’t see as many constellations as they had hoped for due to the clouds.

The cinema tent showed three children’s films such as Moana, Into The Woods and Storks every evening from 6pm. It wasn’t a marvellous viewing experience as it doubled as a creche. Children were being dropped off at any point during the film and wandering about for a while before finding somewhere to sit. To be fair, no-one has watching films as their prime focus at any festival, and it served its purpose. There were plenty of cushions dotted about for comfort with some chairs around the edge at the back.

Cooking on camping stoves was encouraged with the sale of fresh vegetables along with fruit and bread (and sweets) at the campsite shop. It was very reasonably priced, with 2 pints of milk costing just £1.25.

Alternatively, the cafe had a good range of homecooked meals which were £8 for an adult portion or £4 for a child’s. Homemade chips were £3 for a bowl, and sausage rolls (pork or vegan) were £3.50. There was plenty more to choose from, not forgetting cakes and other treats for afters! Inside the cafe tent was ample seating, making mealtimes an enjoyable and social occasion.

There was also a burger outlet and a pizzeria who gave a discount of a pound to anyone armed with their own reusable plate. This was a wonderful incentive for diners to create minimal waste. In the healing and glamping field, there was a coffee and smoothie wagon.

The underlying ethos throughout the whole festival was appreciating and enjoying our natural environment so it came as no surprise to discover how anti-waste the organisers are. On top of the discounts for using your own plate for pizza, all food was served on biodegradable plates. Drinks all came in paper cups. There were also metal starry skies water bottles on sale, doubling up as a useful souvenir.

All rubbish was sorted by guests or staff into five recycling categories. Only the very minimum was classed as non-recyclable and disposed of as such. I was very impressed as all the festivals I have been to have been happy to have rubbish split into recycling and general waste. I’ve also never previously observed staff checking through the bins. Well done to Starry Skies for taking the initiative here. 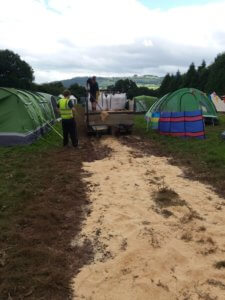 Unfortunately there were several showers and gusty winds up until the last day of the festival. Rain most certainly did not stop play though! The fact that it is such a small festival certainly had a bearing on this but the organisers still weren’t taking any chances.

There were a good number of sheltered areas including the bar, the cafe, the cinema and several activity areas including a huge sandpit. I was also very pleased to see stewards putting saw dust on the main paths to keep them usable.

There was also a handy supply of farm vehicles on hand for towing, although I don’t believe these were needed.

This ia a lovely picturesque mini festival, perfect for young families to unwind from the hectic real world. Children and their families will come away feeling relaxed and refreshed, and more knowledgeable and appreciative of our natural environment.

Parents will not be too out of pocket as there is little to spend money on other than food and facepainting! One parent accurately advised me on the first day, that children spend Wednesday and most of Thursday finding their feet. By Friday, they have settled into the world where boundaries are redefined, and the fun is constant! 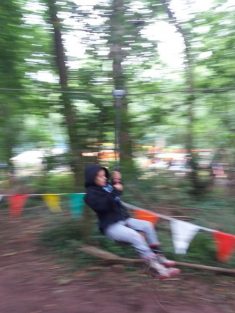 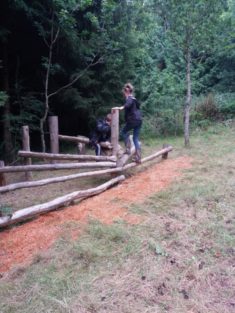 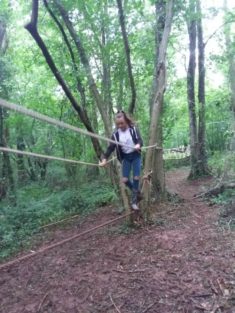 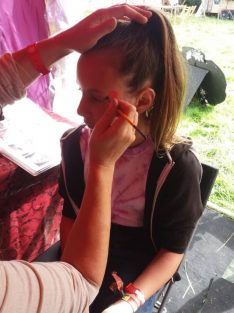