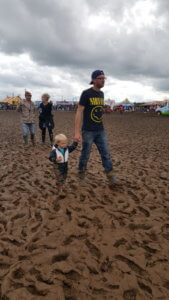 So I have to admit our family trip to Y Not Festival did not start well. We arrived just as the rain started, only to find the camping near where I picked up my wristband was full. No worries. We’ll pop back in the car and drive round to the family camping.

The website had promised a family field with family wristband entry nice and close to the car park for easy unloading so it was probably the best place for my family to be anyway. However when we got there it wasn’t quite as I had imagined.

The family camping was immediately inside the gates so everyone on arrival to the festival site entered through family camping and had to walk through the length of the field to reach any other camping. Of course, many people entered the site and just camped in the nearest space. So it wasn’t really family camping. And it was full.

We wobbled our pushchair down a fire lane searching for space when a friendly family directed us to what I assume was an overflow field. It was lovely. So we put our tent up in the rain, had something to eat and changed out of our wet clothes (did I mention it was raining?)

In 2012 Y Not Festival won the FestivalKidz award for best small festival, but that festival was a very different creature to 2017’s Y Not Festival which has now grown to 26,000 capacity and includes various glamping options on top of the general camping.

Due to the size it was quite a walk to the arena, so not a festival for just popping back to your tent. In the arena we found fairground rides, a number of food stalls and shops and of course the family activities.

Angel Gardens had to pull out at short notice due to safety concerns but there were still activities such as circus skills and jewellery making for the children to try. Best of all; they were undercover.

It was around this time that we heard from a festival goer that the Main Stage was out of action and the Vaccines weren’t able to play that night. Frank Turner did a brilliant job in the Quarry tent ensuring that people were still enjoying the music and his lyrics “Rejoice, Rebuild, The storm has passed,” took on a whole new meaning for the wet crowd. 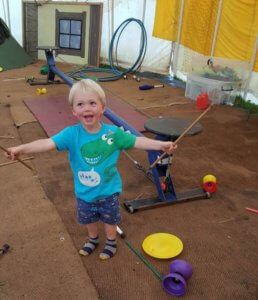 The team at Y Not reacted to the weather all day on Saturday, putting down woodchip and matting in the carparks, but another downpour in the early hours of Sunday morning was game over for the festival which had to be cancelled for safety reasons.

The team have released a statement here stating that “We will return in 2018, fully committed to delivering the best show in our history and putting right what went wrong in 2017.” I for one, look forward to seeing that happen as the beautiful setting and history of excellent music means that Y Not has the potential to be a truly great festival.