Before I went to Starry Skies, I spent hours pouring over the map that I had been sent. Trying to decide where best to camp, which luggage drop off to use, how far away from the toilets I should be and how crowded the different campsites would be.

Upon arrival we decided to take our tent with us and choose a spot before we unloaded. We walked through the efficient wristband exchange and headed towards the festival.

Very quickly we realised that the site was tiny! Before we knew it, we had walked past the centre camp barn and trotted straight through the health and wellbeing area.

Nowhere was crowded and so we looked around for level ground before pitching camp directly opposite the Neptune bag drop off.

In the other campsites areas were cordoned off for groups who had booked together, and I assume for people with disabilities, as there were several small sites reserved near to the action and the accessible shower.

Groups who hadn’t pre booked needn’t worry though as neither Saturn or Neptune field filled up during the festival. The space next to us alone was large enough to comfortably fit two families who arrived late the following day.

These are what Starry Skies is all about and we were issued with a packed schedule before we arrived so that we could plan out our days.

Most activities were led by professional educators but there were a few run by enthusiasts such as the radiographer who did a session on bones.

On the first day both kids were keen to go to forest school. My husband took the smallest to the under 5s session and a little later my 6 year old daughter and I headed to her session.

We arrived about twenty minutes early and I said to her “Right. Now we know where it is shall we carry on exploring and come back nearer the start?”

A kind parent standing nearby (they are all kind parents here; really nice kids too) said they’d been told to come early as the forest school is popular, so we might want to wait. Sure enough 15 minutes before the session began the instructors turned up, counted 20 kids with my daughter being the last and politely turned the rest away.

Similar things happened at other popular sessions. We were turned away from rocket making the first time we tried to go and we failed to get a good seat for the circus.

Archery and the zip line always have a long queue and you could lay down and have a nap whilst you waited for pony grooming.

This wasn’t the case for all sessions though – we turned up to Planet Pretend fifteen minutes early only to beat the facilitators themselves.

Don’t let that put you off though. Everything we wanted to do we managed to and a variety of areas had drop in activities running throughout the day.

The arts and craft tent along with both under fives areas were always a quiet respite from all the scheduling. The centre of the camp had bubbles, inflatables and organised games at regular intervals plus there’s always Woodland Tribe.

Woodland Tribe was amazing. At the beginning of the festival they’d erected a few simple frames. Children came, hired hammers and saws, helped themselves to wood and got building.

By Saturday it was a metropolis of tree houses, shops and swings. It was fantastic watching the kids working independently to create a functional platform or wall, seeing them work together and discuss ideas, and reading the writing they had decorated their playscape with.

There were plenty of parents loving it too, though on Saturday I did hear one poor mum state, after days of watching her kids hammering, “I am so over woodland tribe now.”

And can I remind you that all, yes – every single one of these activities (except £3 for Woodland Tribe tool hire) – are absolutely FREE.

Your festival ticket includes toasting marshmallows in the under 5s area, it includes giving yourselves glitter face paint, includes that shopping bag you decorated in the arts tent and includes all the yoga you could possibly want to do.

If that’s not reason enough to go to Starry Skies I just don’t know what is. 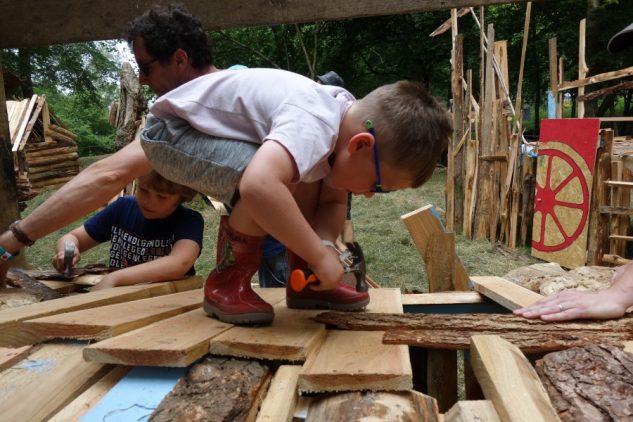 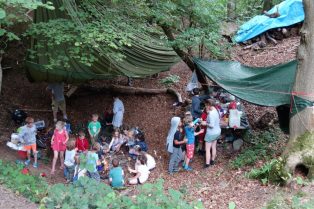 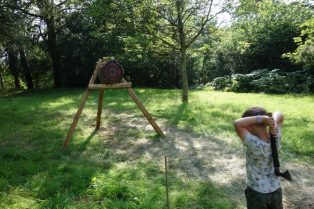 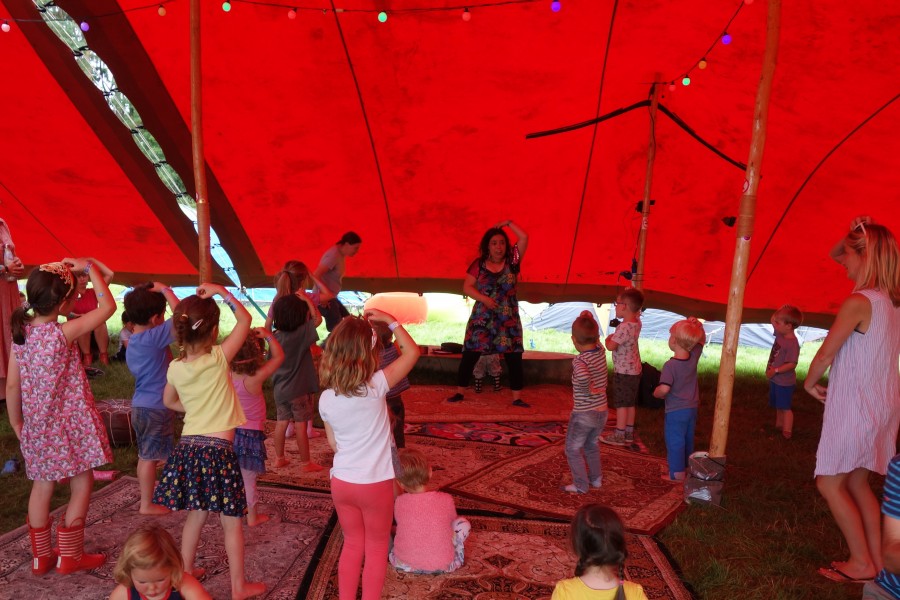 We took food with us to Starry Skies and mainly cooked for ourselves. Many other families seemed to do the same and it was very cute walking through the campsite seeing groups of little tots sitting around tables eating. That’s not to say that there wasn’t food available.

There was a pizza stand, some amazing looking sheep’s milk ice cream, a creperie, and an indoor café with specials each day and Duplo in the corner to keep little ones entertained. The café offered children’s cooking sessions courtesy of Kids Kitchen Collective each morning along with a variety of breakfast choices. They opened at 6am for early risers and stayed open well past my bed time.

Quiche or samosa’s with salad were £7. Vegan and gluten free options are also available, including pizzas. A pint of beer was about £4.80 and can of soft drink was £2.

The most popular by far was the pizzeria. On the final day, about halfway through the fancy dress disco I decided to join the line and finally treat our family to those pizzas we had been eying up all trip.

An hour later, still waiting for our pizzas the idea did not seem so great. Daddy bought some chips from the café (no queue there) to fill the kids tummies and we hoovered up the pizzas when we finally got them.

Our only other experience with food buying was in the shop. The first night we decided to buy some milk for breakfast and ended up with a litre of UHT for £3. It wasn’t even cool, having been stored on top of the fridge. This rather put us off of using the shop, but it was good to know that they had all the essentials – bacon, fruit, marshmallows – should the need arise.

I can’t really complain too much about the shop at Starry Skies though. It was inside a small unassuming tent and so was easy to avoid for the rest of the trip. Also I assume the funds raised make the festival able to happen as it must be a huge cost putting such a variety of activities and facilities on.

It was so nice not having to ever run the gauntlet of festival stalls. There were no children constantly asking if they could buy flowers for their hair, glow sticks, or overpriced festival clothes.

The lack of hard sell is well worth £3 for some milk. 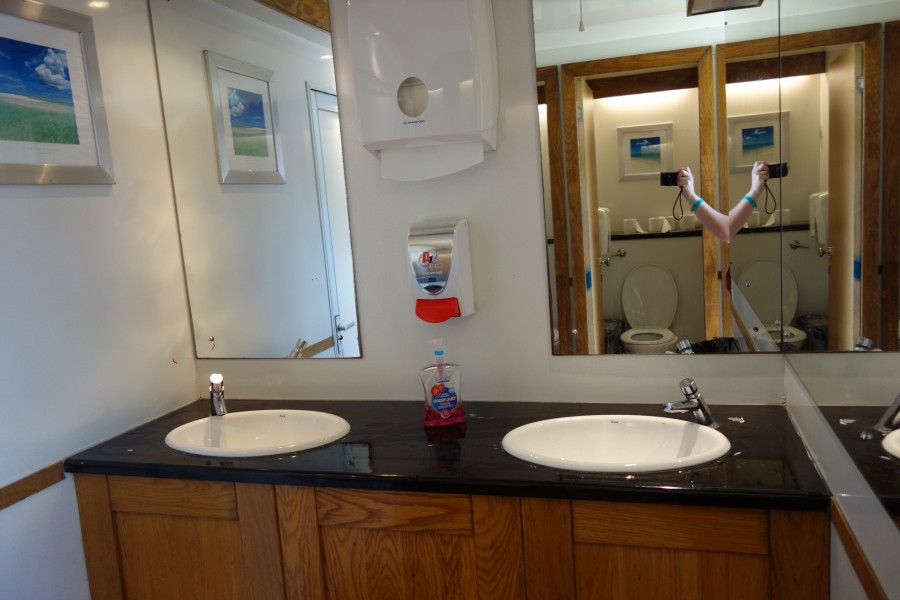 Not bad for festival toilets!

There are new toilets this year. Flushable ones with running water and soap for afterwards. These were lovely at first.

They did get a little full each morning, and I hope the team picked up on it and will include an extra clean in the evening next year. They are generally well stocked with toilet paper and soap.

Some people I spoke with preferred the waterless toilets from last year, but as a newbie I was very happy to not have to deal with portable toilets. Showers were nice and plenty of them.

The issue for me was the washing up facilities. I “ummed” and “erred” about taking a bowl, eventually deciding against it, having read they have washing up stations. However in all of Neptune camp there was just one washing up sink. I’m sure you can imagine the queues.

With no bins by the sink, a small pile of food waste grew where the waste water let out onto the ground. I recommend you take your own bowl, fill it from the tap, then wash up in that as opposed to waiting for a sink.

There are extra facilities you might not expect to find at a festival. A trailer goes back and forth carrying luggage from the car park to the campsites (make sure your bags are closed!), and wheelbarrows are available to move your smaller bits and bobs.

Baby baths are in a lovely tent full of storybooks. There’s free ice pack exchange, which experienced a few problems this year, but they got resolved it by changing the freezer. This typifies their responsiveness to issues and gives me confidence the festival is going to continue getting better and better.

Starry skies is a fantastic camping holiday. The atmosphere is wonderful. Your children are able to play outdoors for days on end with no chance of you ever hearing “I’m bored.”

It’s really good value and could happily fill your annual summer holiday slot. I would have liked a few more adult activities such as a beeswax wrap making workshops, for example. The yoga was always full and so I’m sure there’s an audience for more of it.

If you have young children and want to keep them busy, if you have older children who want to experience their first taste of independence or if you have a mixed family group, this is the place for you.

I plan on returning in a couple of years and taking all the cousins. It will be an experience they remember forever. 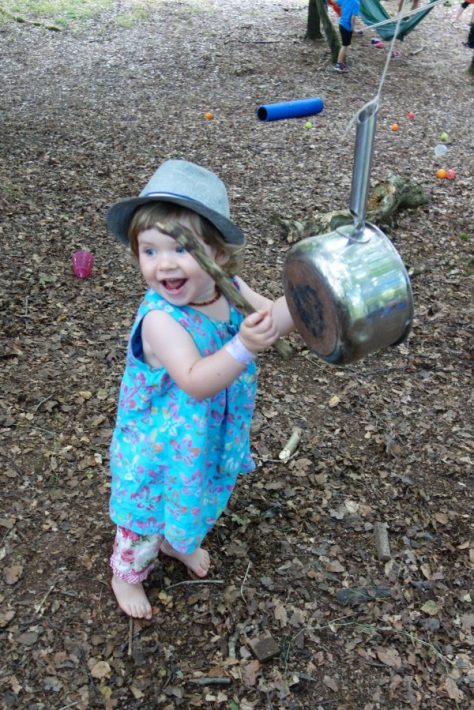 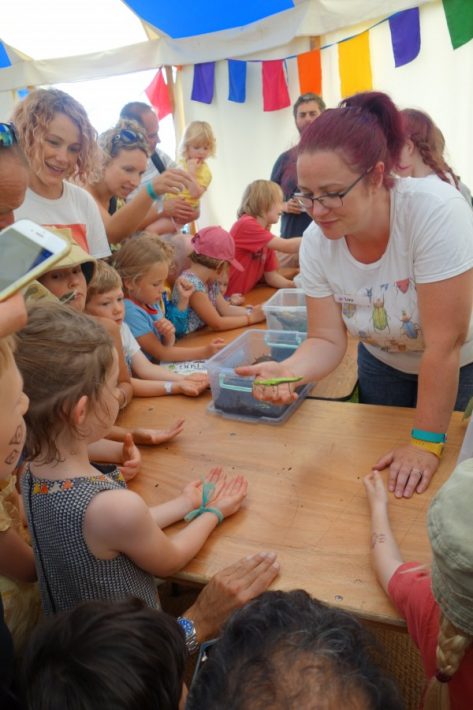