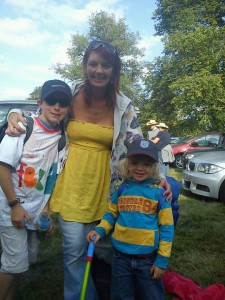 After a wonderful weekend of fun, music and frivolities with my two lovely festival kids, it’s taken me a few days to regain normality to our routine, hardly surprising when The Cornbury Festival was so entertaining!! Only a half hour’s drive from our home town, in a beautiful countryside setting, who could resist a weekend away with so much to offer? Alpro Soya asked me to come along as their guest to The Cornbury Festival on behalf of Festival Kidz and see how us festival goers really enjoyed ourselves, sampling their free tasty goodies all weekend at the Alpro Breakfest Stand too!!

The organisers made parking and getting our wrist bands child’s play, my little ones with my mobile number etched onto their free bands were set for plenty of fun… but little did we know how much was on offer!

After setting up camp to the sounds of Eliza Doolittle with the assistance of my lovely friend, we could not wait to see and hear Cyndi Lauper and James Blunt on the Pleasant Valley Stage and we were not disappointed!! ‘Girls just wanna have fun’ took me back a few years whilst we strolled around the beautiful festival site.

The Poshstock crowd was full of as many children as adults and as the sun set beautifully on Great Tew, James Blunt was heard to say “I’ve played at festivals all over the world but Cornbury is the prettiest!”  He was not wrong!!  Tune after tune, everyone sang along as he played beautifully and all too quickly Day One of the Cornbury Festival came to a close with sweet dreams of much more fun to come… 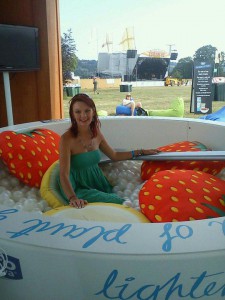 I awoke to sunshine and smiles and a quick camp breakfast of coco-pops… knowing we had a second delicious breaky awaiting us at the Alpro Soya Breakfest Bar overlooking the main stage!

We headed towards their giant cereal bowl and the boys couldn’t wait to dive in for our free fun photo downloaded direct to Facebook… one of many Cornbury memories captured forever!!

So with yummy cereals, fresh fruits and yoghurts inside us, we danced in the Disco Shed, juggled in the Kaos Circus Skills Workshop and checked out The Arts Tent and more, so many things to do and see!

I tried to plan our day around the numerous workshops and activities on offer, but as I’m sure you know if you’ve ever taken children to festivals like Cornbury, plans never work… yet it didn’t matter one bit! 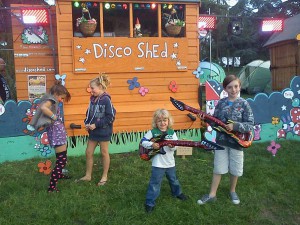 Rocking at the Disco Shed

My boys loved Tatty Bumpkin‘s yoga for kids (I recommend an easy start to the day!), then made model after model in the Far Out Clay Workshop as well as two particular fine examples of puppet dogs courtesy of Funky Festival Crafts in the Arts Tent – with much assistance form their lovely helpers!  No festival is complete without obligatory face paints… and fortunately Ade, the face painting fairy was on hand to decorate big kids (me!) and little kids alike with pretty flowers and tiger faces and paws!!

Now truly transformed into Festy-goers, we headed towards the Songbird Stage for our first taste of local music, a well reputed rock band Little Fish from Oxford, they were a definite crowd puller and rocked it through the afternoon!!

Back at Pleasant Valley Stage, Deacon Blue offered some wonderful classics as we feasted on some traditional steak pies, chips and mushy peas… and still my boys played to their heart’s content!  In the children’s area, the Yarnsmith had them mesmerised with his stories of old and the lovely Tin Pan Annie, with her fun and interactive singing went down a treat with my lil train mad boy Finley, in an instant he was imaginatively transformed into a locomotive with a colourful following of boys and girls carriages choo-chooing behind… it truly made his day!! 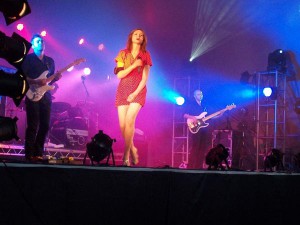 Soon sunshine turned into dusk and the musical highlight for us was to be Sophie Ellis Bextor on the Songbird Stage… and she truly was a class act for young and old alike! I have to admit to a scary moment when my big boy Felix, oh too quickly escaped my sight and disappeared to the front of the stage to take a closer look at the beautiful lady in red… unfortunately he lost his way back to us in the loudly clapping crowd only to be returned moments later thankfully with another lovely lady… from security, phew! panic over!

His little adventure had caused concern, but he was oblivious to it all, happily admiring his close up photo of his idol!!  I have to say that the organisers were so helpful and obliging at this family event, it was not only fortunate, but very reassuring as a single parent of two lively little boys.

The Saturday night headlining act, The Faces were a popular choice for many at Cornbury, but sadly it was all too much, too late for my little boys and we set out for our short walk back to our camp to the sound of Mick Hucknell, with grubby grins and Alpro desserts all round for our late night camp supper!

Again the sun shone over Cornbury and my boys thankfully had rested well, considering we did not pitch up in the quieter campsite!  The worst noise for me all night long was the toilet doors banging; note to self: must not be too near toilets next time!

Most of our morning was spent being entertained by weird and wonderful fancy dressed passing creatures, Alladins on magic carpets, a huge hairy bear, a monster in a walking arm chair to name but a few jaw-dropping sights, but the rest of the workshops were drawing us in, there was still Science experiments to be done and Carnival masks to be made!

I had made a conscious decision even before stepping foot on pretty Cornbury to avoid the bright lights and noise of the funfair (much to my children’s dismay) but I really am not a fan of expensive rides at any festival at all.  We did however have a great time wandering around the colourful stalls with some well earned pocket money to spend. Two inflatable guitars and a fancy dress outfit later, my boys were soon back in the huge Children’s area again, watching Tallulah Swirls play and weaving ribbons through the stunning Withy Tunnel to make a rainbow serpent. 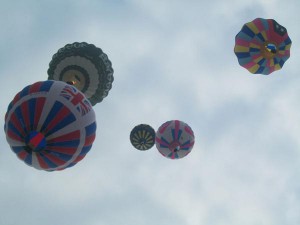 Our excitement grew on Sunday afternoon as The Straits played memorable song after song, Brothers in Arms definitely my favourite oldie, but for my boys there was no doubt they were awaiting the top kids choice, the adorable Olly Murs.

He was welcomed on stage to wolf whistles, and screams filled the arena for the first time all weekend!! My boys are big fans of The X Factor and with tickets to see Olly again later in this month, they had looked forward to this moment all weekend!! So with no point me even thinking about going back to camp and to take down the tent for an easy departure, I watched my little lovelies happily lost in music, singing and dancing along with thousands of other happy festival kids.

It was at this point I noticed how particularly colourful and beautiful, yet crowded, Cornbury had become. I was surrounded by chilled out festival lovers, lounging on their deckchairs enjoying the music and sunshine in such a relaxed state. It wasn’t very long after Olly Murs’ lively set, an amazing sight appeared behind the Pleasant Valley Stage which will last with me forever… first one, then two, then a whole group of spectacular colourful hot-air balloons appeared from nowhere and rose up into the beautiful clear skies.

It was so surprising and exciting, everyone stood quiet at first, gasping in awe of the unusual and unexpected bonus we were all experiencing!! For me, this was my top moment at Cornbury…  OK so it was not in the programme, but along with the vast array of treats offered, kid’s workshops, crazy entertainment and huge variety of music from class acts old and new… I could not have been happier at that moment in time!

My boys smiling faces too said it all too, they couldn’t contain their excitement, not only were they at ‘the best festival for kids ever mummy’ but they proved to me that all the tired nights of preparation, the packing, the tent pitching, the uncomfortable sleepless nights were completely and utterly worth it!! 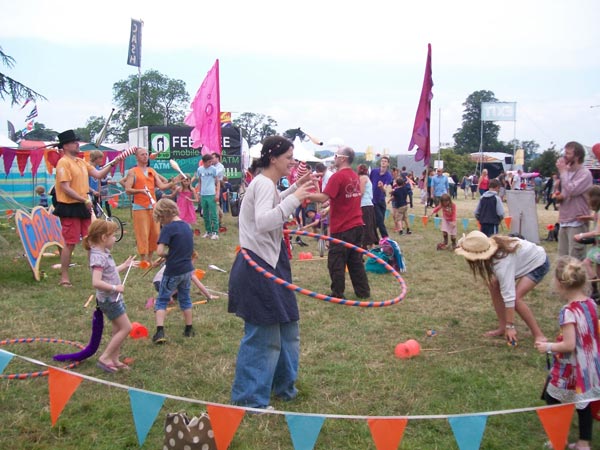 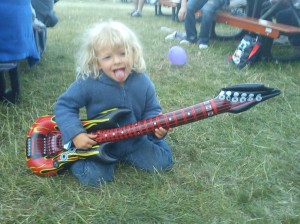 Unfortunately, with so much packing up to do (as a single parent, my juggling skills are great but I cannot work miracles) and with darkness falling on a school night, I decided that it would be best for us to leave Cornbury a little before the very end of Sunday’s headlining act, yet I was determined my boys would make the most of their newly festy purchases and rock it to Status Quo!

With one last burst of energy, my fancy dressed boys were soon Rocking all over the World playing their inflatable air guitars loud and proud with the best English Rock band of all time!  It almost brought tears of happiness to my eyes, I too was proud that I had taken on and conquered the best of Cornbury Festival with my children; a weekend of beautiful people having a truly English fun filled family party with a difference.

We adored every minute and with only 360 sleeps till next time, we can’t wait to do it all again next year! I would definitely recommend it to one and all and as for my boys… they’ve made me promise to take them every year as its ‘even better than our proper holidays’ – and that’s saying something!!

A big thank you to Alpro Soya and Festival Kidz, and all the other lovelies who made our weekend so special and see you next time! 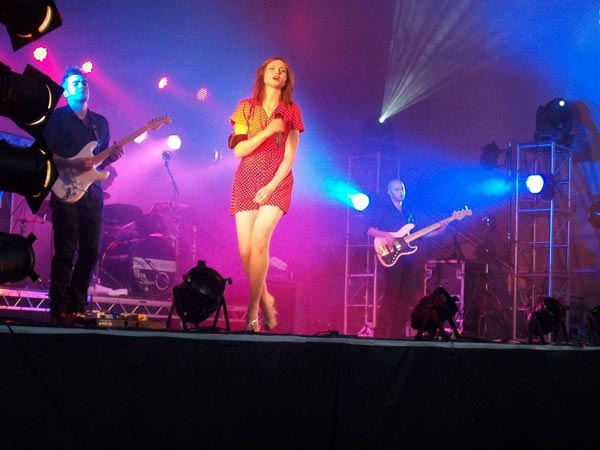 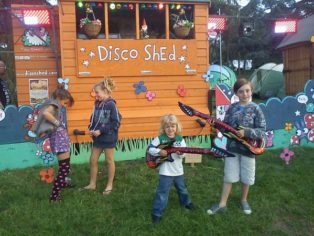 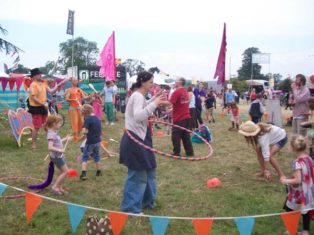 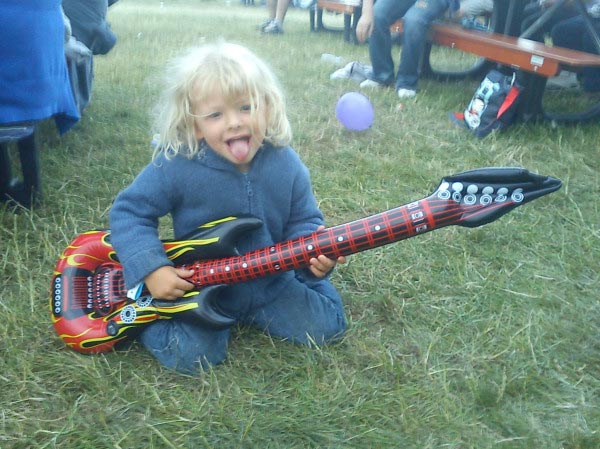 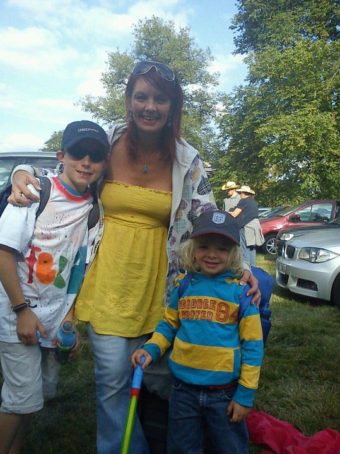 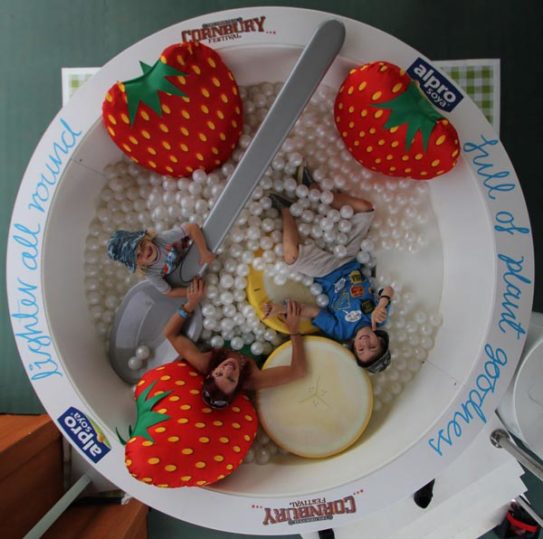 Our fun photo taken at the Alpro Breakfest stand – one of the weekend’s memories we will never forget! 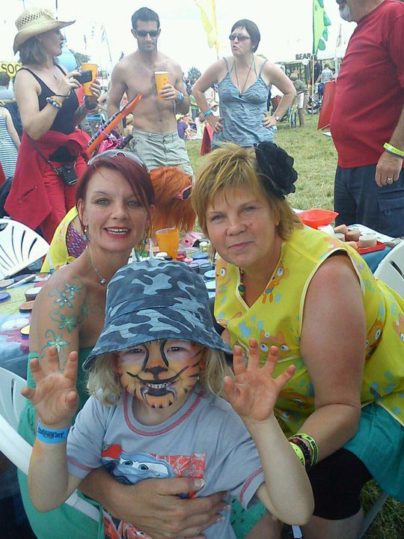 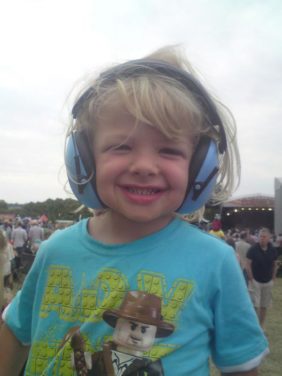 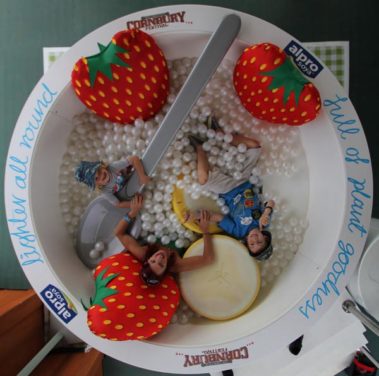 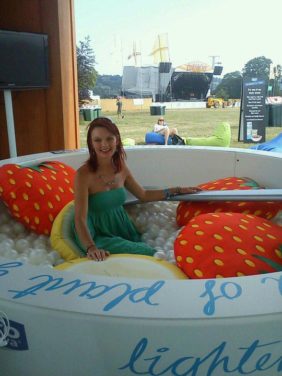 Karon in the Alpro BreakFest Bowl at Cornbury! 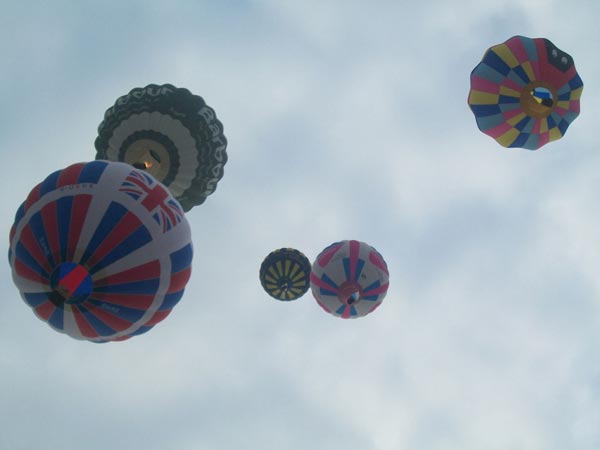