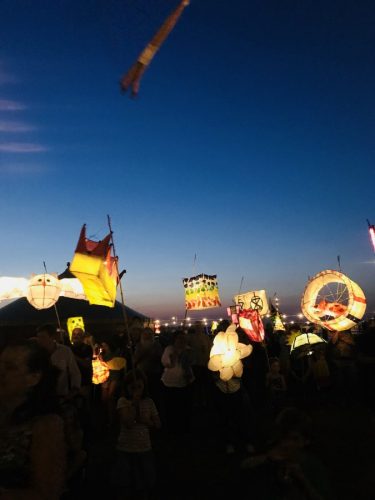 The last time I’d spent 5 nights at a festival was Glastonbury 2007; and I won’t pretend that I wasn’t a little bit daunted at the prospect of doing it with two children in tow.

However Towersey Festival is held over the August Bank Holiday weekend so it makes sense to include the Monday. It’s great value for money to have a full programme of activities that runs for 4 full days ending on Monday evening.

We arrived late on Thursday night and were very grateful to find that the site was so easy to locate! There were no windy lanes or strange diversions, the Towersey showground is just outside Thame and very well signposted.

Entrance into the site was quick and easy. We collected our wristbands from the exchange along with a programme and newsletter. First impressions were of a very well run, well organised established festival.

Towersey Festival has by far the most jam-packed kids programme I’ve ever seen. It was one of the biggest attractions for me as my kids love to get involved in activities and workshops and to learn new skills. I’d already spent lots of time on line planning the things we wanted to do. Even though we were there for 4 full days I did wonder if we would get it all done!

Having a programme in my hand throughout the weekend  was essential to keep track of what was going on. The AAC area also had a fabulous programme which was on the festival website but it wasn’t included in the printed programme. This was a shame as the activities were top quality and I’m not sure all visitors were aware that they were on. Certainly some of the evening shows would have had better attendance if the programme was more readily available.

On the first morning we headed across the site to get a feel for the size and space of the Festival. The All About Children area was in a separate field near to The Festival Green. They had a number of tents and marquees set up with a space in the middle for outside activities.

During the day there was a range of craft activities on offer, all really well organised and with good quality craft supplies. Later in the afternoon after the organised sessions the tables were cleared and board games, lego and books laid out for children to play with. 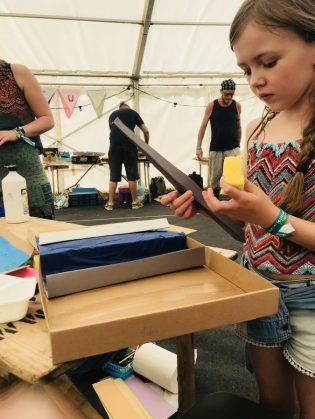 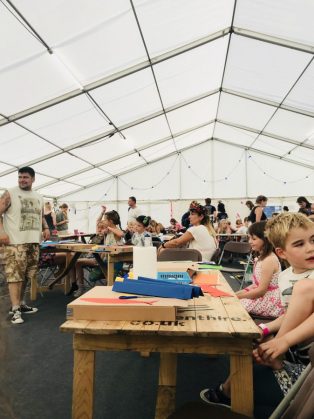 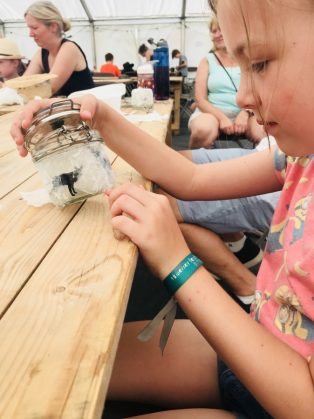 In a smaller tent next door there were toys and books for younger children. It was perfectly situated that I 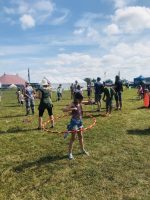 could play with my 3 year old but also keep my 9 year old in view as she took part in the Circus Skills run by Rainbow Dragon in the field outside. The lovely April spent ages with Alba helping her with her hula skills and she came home with lots of new tricks to show off!

Also in the AAC area was The Lantern tent where all weekend you could call in and work on a lantern ready for the parade on Monday evening. This place was a hive of activity all weekend and clearly a favourite for lots of Towersey regulars.

At 6pm each evening there was a family show in the AAC field. On our first night was Luth and her Big Tops and Tiny Tots Circus Show. This was aimed perfectly at 3-7 year olds and Luth’s energy and excitement was really contagious.

Our favourite Family Show by far though was Pete Whites Suitcase Circus.

His act was a hilarious blend of slapstick, circus, magic and jokes that only the grown ups might get! He was performing numerous times over the weekend and was a huge hit. Alba’s obsession with hula hooping took another boost when she took part in his hula hoop challenge and got to 100 spins! A very proud parent moment for me!

This tent was placed in the middle of The Festival Green and had acts and classes on throughout the day. This started with the Towersey Choir practice each morning.  There were also Charleston dance classes, magic acts and this was also the place where we first saw the Frumptarn Guggenband. Frumptarn are one of the UK’s leading Guggen bands, taking brassband performance and percussion to a whole new level! They have played Towersey the last few years and it’s no surprise that they were rebooked as they drew huge crowds for every performance. Lots of hit tunes and audience participation, we were all up on our feet for this one!

This area was nestled opposite the V65 stage, close to the FDH tent and also near a few stalls. With a cocktail bar, Beetle Juice,  just opposite it was a perfect spot to settle for a couple of hours. Set up at the Quarter were sand pits, giant Jenga, chess sets, lego, sensory areas, a puppet show and much much more. At 1pm each day there was free face painting which was wonderfully well organised with helpers that had t shirts stating “ask me about face painting”. 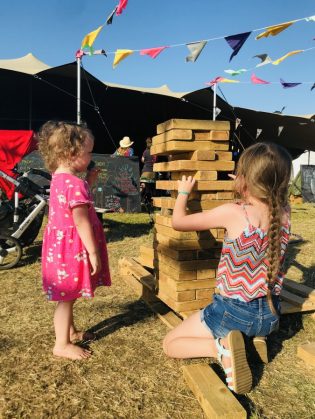 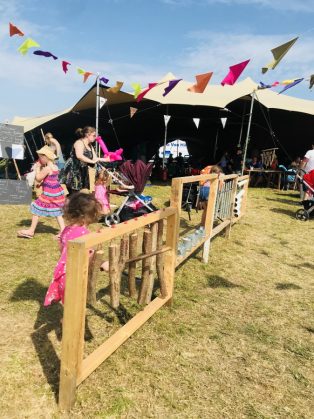 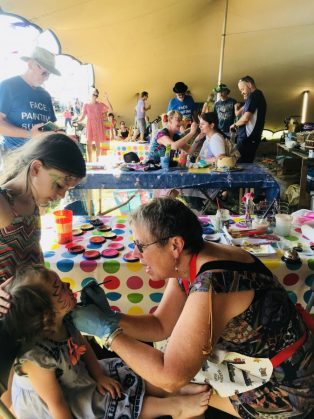 It all ran so smoothly you couldn’t help but be impressed. Later in the afternoon they had activities such as flower crown making which was hosted by Backwoods Experiences. These were also free but needed to be booked in advance. Again all fantastically well organised and great fun.

The weather over the weekend was extremely hot. Areas in the shade were very popular and finding ways to stay cool wasn’t easy. On Monday afternoon, an absolute genius in the Creative Quarter, filled a load of buckets with water and placed them outside around the play area, along with water pistols and sponges.

The impromptu water fight that ensued was hilarious! Children and parents all joining in, getting soaked and keeping cool in the sun. It’s little moments like this that make Festivals special for me, unplanned, unexpected fun.

Close to the Creative Quarter was a small tent hosting the Angel Emporium. Here you could pick up Towersey merchandise and they also had an information point for festival goers.

At 12 noon everyday they held a lunchtime disco with a different theme each day. There’s something special about dancing your socks off in the middle of the day to Abba with lots of like minded people. While your kids run around in fancy dress from the huge dressing up trunk.

We made it here three days out of four. In the evening this was also where you could find the glitter fairy who would glitter you up ready for the evening’s festivities!

It was my youngest daughter’s third birthday when we were at Towersey so as a treat we booked ourselves a pre pitched caravan through Complete Caravans. The caravan was delivered to the festival and set up, with electric hook up, all ready for when we arrived late Thursday. The caravan was fully equipped with everything we needed for our stay and the kids absolutely loved it.

From my perspective it was great to have a fridge, cooking facilities and a toilet! Someone from the rental company visited on Friday to check we were all settled in and okay and we had great service throughout our stay. Although more expensive than just taking your own tent, it wasn’t much more than some of the glamping options. It’s definitely something I’d consider for future festivals, particularly longer ones like Towersey. 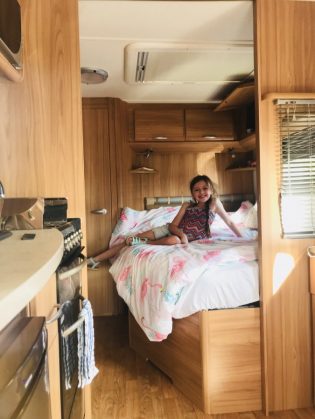 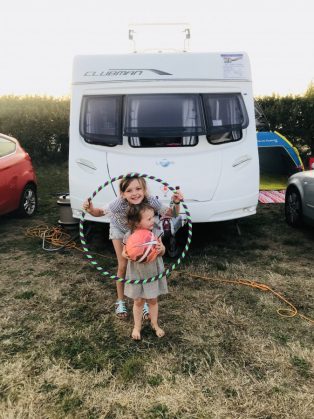 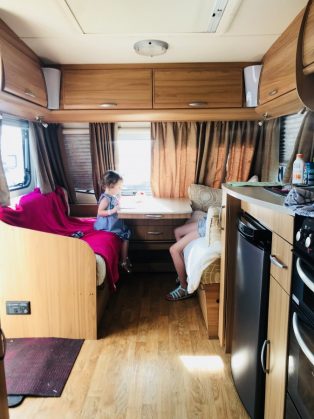 The rest of the camping areas were spread around the Festival Green and split into late night and early risers areas. In some areas you could drive onto the site and pitch your tent next to your car. This is a great option for those who might struggle moving all their equipment from car park to tent field. There were also toilets and showers aplenty and all kept extremely clean throughout the weekend.

There was a huge array of food stalls at the Festival, mostly located inside the main arena. All the usual suspects were there, fish and chips, curry, vegan and pizza. There was also a great selection of sweet stalls, offering pancakes, ice cream, cakes and desserts.

Prices for a meal from most were around the £7.00 mark which is pretty standard for most festivals. We mostly ate at our caravan but we sampled lots of the desserts and the kids really enjoyed the shakes from the milkshake stall. 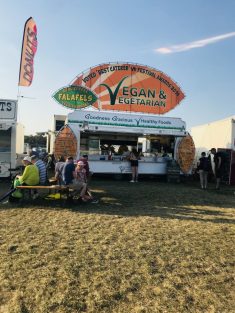 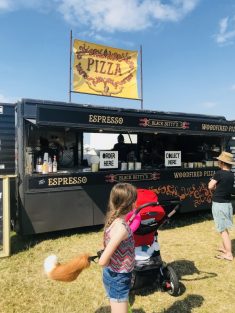 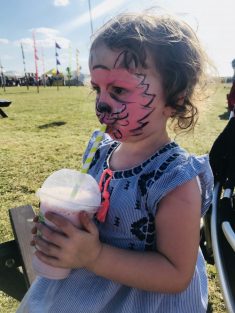 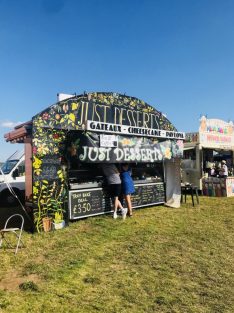 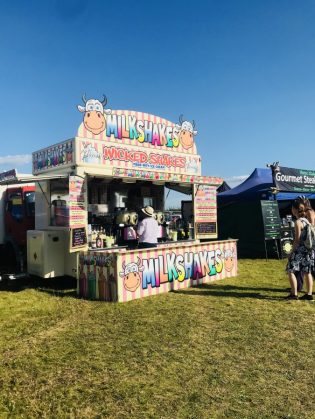 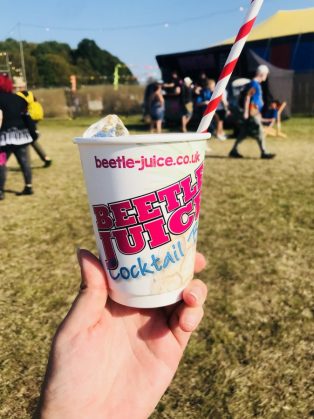 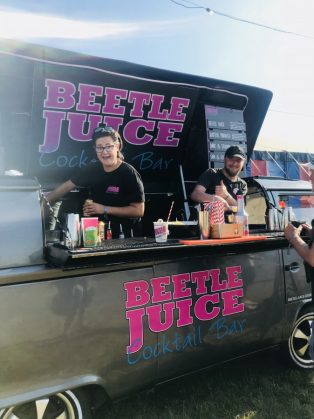 The facilities at Towersey were immaculate. They claim on their website to have the cleanest festival toilets and I think they are right. There were hardly ever any queues and the toilets were maintained throughout the weekend by a team of amazing cleaners.

On top of that the site was kept so clear of litter that I failed to spot any all weekend! A combination of an environmentally conscious crowd and an amazing litter team named ‘The Wombles’ who kept the site looking beautiful.

There was a ban on single use plastic water bottles. In addition to this all the bars offered reusable Towersey plastic cups instead of single use ones. Not only are these much better for the environment but they are a great keepsake to bring home. We came home with 4, all of different designs and all a lovely reminder of a great weekend.

The team of Towersey Festival volunteers deserve a mention. They were all well informed, easy to spot and happy to help and chat. They were located all around the site during the day and also in the evenings patrolling around the camp areas checking everyone is okay. As a single parent it provides a real sense of safety and reassurance when the support at a Festival is this good.

We were also given a newsletter when we arrived that had lots of helpful info. I referred to it numerous times over the weekend. There was also a Towersey Festival App that you could download and use to plan your weekend with reminders for acts you wanted to see. And finally a Whats App number that you could message with questions. All brilliant ways for visitors to be able to communicate with the Festival team.

The Future of Towersey

I was blown away throughout the weekend by the organisation at Towersey. The communication, the wonderful acts, the helpful volunteers, everything was just perfect. I couldn’t find fault in much at all. It ran like a well oiled machine and there were very few blips that I could see.  But there was something nagging at me all weekend. Something missing, which seemed ridiculous when the Festival seems so perfect.

All became clear when I took the time to watch the promo video in the Merchandise Tent on Monday afternoon. Towersey Festival has found a new home, Claydon Estate. And Claydon Estate has all the things that I feel were missing at the Showground. Towersey Festival is truly magical and it deserves a site that will enhance and strengthen that magic. The new site is just that. Picturesque, with woodland, hills, lakes and a magic that just isn’t present in Thame Showground. Claydon Estate will be the cherry on the Towersey cake. I cannot wait to visit next year and see how this amazing festival has settled into its new home.

Early Bird tickets are on sale now and can be purchased here.

For more on Towersey please see our factsheet. 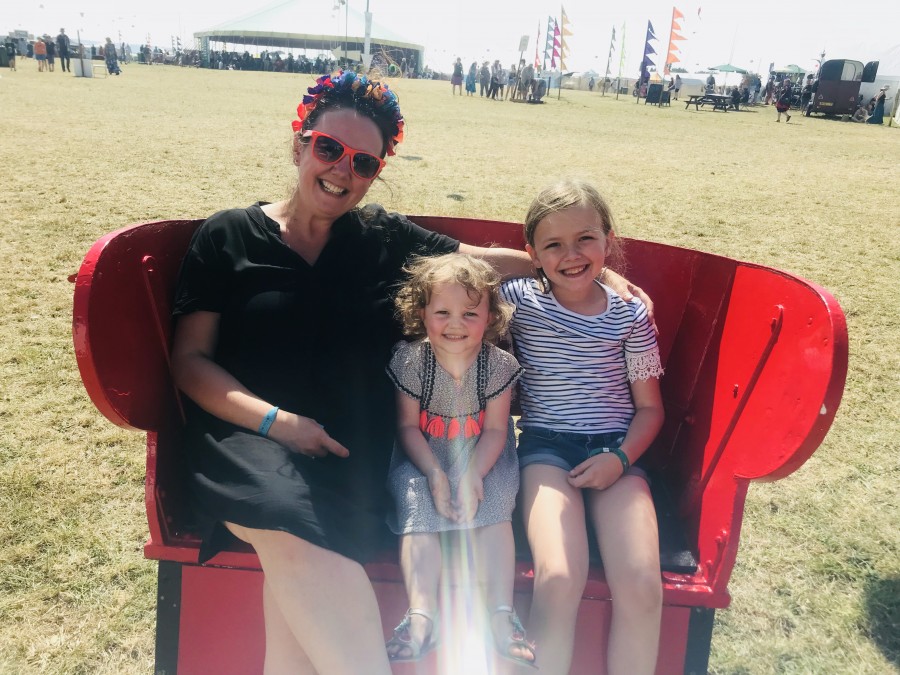