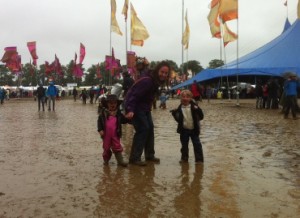 Let me just say at the outset that it rained at Womad, not just heavily but torrentially then stopped then rained again. Now I am not one to whimper at the first sign of a bit of water from above but this review is tempered by the fact that this brilliant festival endured a WOMUD year. Having said that, it is obvious the event provides so much to enlighten, entertain and enhance both young and old minds.

Having wanted to go to the festival of world music for so long we can safely say that it did not disappoint. It has a feel of a small, intimate and exciting festival and yet it’s the biggest stage for acts from around the world.

Trying to get into a festival with two children can sometimes be a tiring experience. You are on site, the kids are bursting with excitement and then … nothing happens except queuing. At times like this I turn into Victor Meldrew and wish I was back at home sipping a well-balanced Rioja. However nothing like this happens at WOMAD, the box office is informative, stewards helpful and we are soon setting up our tent with the kids seeming to be more interested in picking up mallets and cooking utensils than what is on offer. The site is flat and ideal for those with limited mobility or pushchairs with glamping options and disabled camping very near the main arena. 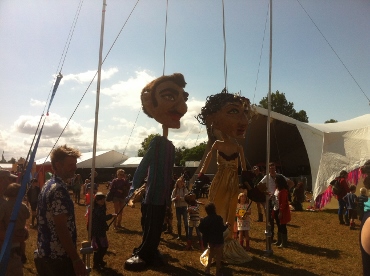 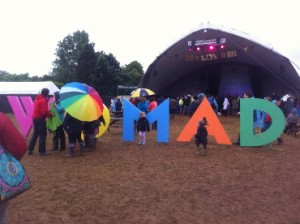 One of the tests of an event is the ability by which they cope under difficult conditions. With buckets of rain turning busy areas into a quagmire of mud it could have been very difficult to move around but the provision of a metal path running from the car park to the camping areas and then to the main arena made walking somewhat easier. Although for a time the kids enjoyed slipping around in the mud though we did see several people with buggies sludging through looking slightly care-worn! The toilets were always kept clean and restocked with paper and hand gel but found that you sometimes had to walk some way to get to them which can be tricky with little ‘uns. Water points are plentiful and rubbish is kept to a minimum. There were recycling points available and the many large marquees and tents available allowed people to shelter from the worst of the weather whilst be entertained by the best music.

As for the past 21 years the main arena is alive with 300 flags each made by Angus Watt. They are a real feature to the site and even when everything turned brown on the ground continued to brighten the mood. 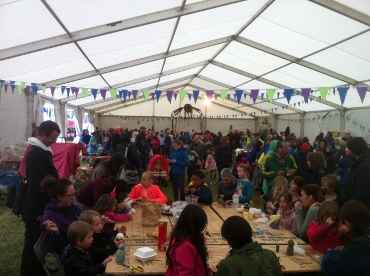 As you would expect from a world music festival the food and drink are similarly diverse from goat curries to tartiflette, east African stews to Japanese dumplings, it’s all there and more. So bewildering was the array that it was difficult to choose from the great choices. The price of a lot of dishes was around £7 to £9 but we did manage to find some delicious noodles for £5. The children enjoyed a rich pasta dish which the people on the stall were more than happy to split into two bowls. Beers were also quite steep at £4.50 a pint but at least they have a great choice. 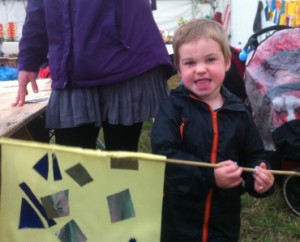 There can be one word to describe what is on offer at the World of Children – overwhelming. There are so many crafts and activities to undertaken that at first we didn’t know what to do or where to start and then didn’t realise that some are sign up and some not. Being new to the festival it would have been good if this was more obvious. We eventually found our feet but this was after first trying to find out from a very, very rude Amnesty International lady who had absolutely no time for us. We then found some stewards who were lovely and smiley and couldn’t have been more helpful.  Hazel and Gwilym ended up having a go at painting dragon pictures, flag making (advertised as screen printing but no matter), fish head dresses and bracelet making from New Zealand Flax (I’m not sure who enjoyed this more us or the kids). Hazel really enjoyed sewing a little witch, which kept her entertained for several hours. There are two main craft tents and one tent seemed to be focused on making costume and constructions for the 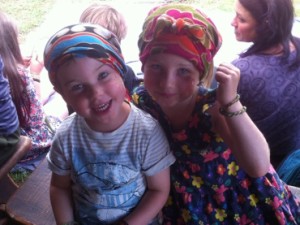 parade. We ended up joining the Sunday procession adorned with our fish head dresses making our way to the main arena and back. The activities were really varied and plentiful where you could learn to be an acrobat, listen to great storytellers, play samba, dance, beatbox, weave willow, make clay items and even control 4 metre high puppets. And when the kids want to have a bit more free-play there is a big music station, circus skills and even big WOMAD letters that some enjoyed climbing on.

There were also facilities for babies and toddlers which my three year instantly dismissed as for babies so didn’t venture in but they looked nice cosy spaces. We didn’t see if there was any special provision for teens but, despite the mud, there seemed to be a lot of happy teenage faces! 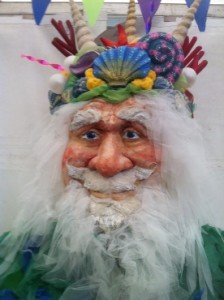 This, I have to admit was the main reason we wanted to come to WOMAD. I had visions of walking into the arena and being opened up to whole new areas of sound. With 94 artists from 53 countries this was always likely but it was when we stumbled into the main tent to shelter from the rain that this really happened. Wet and cold we may have been but the Mahotella Queens made us forget all that. They have been around for years but their joyful and exuberant music put a smile on everyone’s face. Not least due to one of the ladies doing high kicks and falling over in the process – she was smiling more than anyone else!

On the first night we heard the Shantel and Bucovina Club Orkestar but only from a distance as we had bedded down for the night – shame on us. However we made a concerted effort to sample a range of music. We feel it important for children to experience lots of different styles and nationalities of music so they realise that not all music is insipid ‘Let it go’ repeated interminably. There was experimental music from L’hizaz car, party music from Magnifico (wish we caught more of his set) and soulful stuff from Ester Rada. Red Baraat got great reviews from other people we spoke to but we missed them – anothe 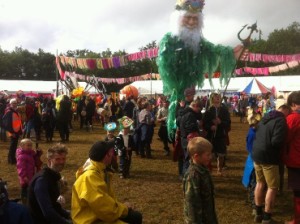 r festival I guess! Another favourite of ours were Mbongwana Star who were just brilliant and the kids were eager to clamber on our shoulders for a lot of this. We then we sat (in the rain again) to listen to Violons Barbares who defied description, at one point they declared that this song is from Kazakstan and then played one from Mongolia with French overtones! This is the kind of thing you come to WOMAD for, a completely new experience both for parents and children.

But the festival isn’t just about the World of Music or World of Children there are a number of other areas which are well worth visiting and provide welcome relief to the mayhem of the kids area. The arboretum is a delight to stroll through and encompasses the World Of Wellbeing. There is the usual array of alternative treatments such as massage, gong baths and reiki but also included green woodworking. I had been longing to have a go at turning a bowl on a pole lathe for some time, so I grabbed the opportunity to. Caroline took the kids for a trip on the land train that circumnavigates the festival and again was a welcome relief from the rain. They then continued with crafts in the Children’s area whilst I spent a few hours turning my bowl (in blissful peace!) 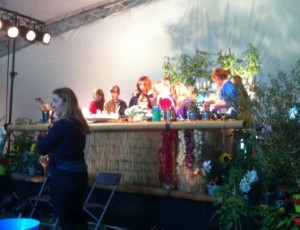 Unfortunately with so much going on at the festival we didn’t get a chance to experience the World of Words but we were very intrigued by the Human Books which is a library where books have been replaced by people with incredible stories to share. They ranged from ‘Yurt maker with MS’ to ‘Buddhist on a Bike’ – there is always next year!  We did, however take our kids to the World of Food. Here you get to experience culture from a food perspective. The one we attended was specifically for kids (Gwilym was a little young but enjoyed sitting on our knee watching) but could have been more interactive. The food tasted great though and it kept us out of the rain for a while. It is this kind of breadth that the festival can offer; if we had been less soggy we would have got even more from it all, not WOMAD’s fault. 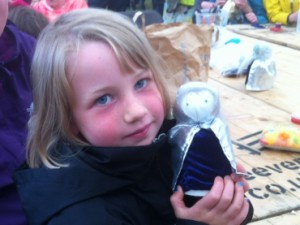 The festival was definitely what we expected and more. It was great to be educated, enlightened and entertained despite the rain and the mud. It is a lovely looking festival with smells and sounds changing so quickly you could think you are on one of Michael Palin’s world trips! Our children loved the festival too and we really think it is one where parents and kids can all be blown away.

See our Factsheet for more information on Womad