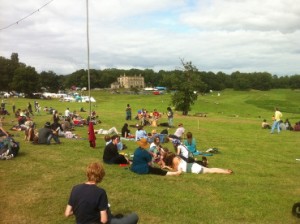 Having spent such a lovely and inspirational time last year we were keen to sample a bit of the green gathering magic once again. Would it be as good as last year or was it all just some cosmic trick? In my opinion it was my favourite ever festival, oh and the kids loved it as well. I am happy to report on just on Sunday’s evidence it did not disappoint, everyone is friendly, the location is stunning and the range of activities just as broad. It’s as far out as you want to make it and as usual we didn’t get to do everything we wanted to do (both adults and children!)

The situation with arrival was definitely an improvement on last year which shows that the GG organisers to listen and do make changes. Shuttle buses provided the access in for those who couldn’t manage the long gravel track through the woods. And for those who need more assistance there are golf buggies that can take people to the assisted camping area. 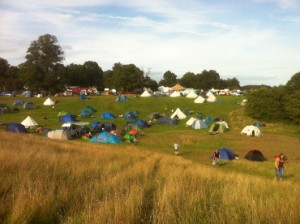 Camping is as free range as the festival itself but does have a separation for those wanting to get a bit more sleep in the quiet area and a separate area for us in the family camping area. Maybe you would like to nestle underneath a tree, be on your own with field all around or be in amongst the party revellers. Choice isn’t really included at other sites where everyone is crammed in and it is really lovely to have that sort of choice here. There was also the provision of showers for those not content to smell of patchouli oil and dirt! There is also the option of more glamorous camping such as hiring a Dreamcatcher cabin. As mentioned earlier there is also ‘assisted camping’ for anyone who needs that extra bit of help to make their festival experience the best. 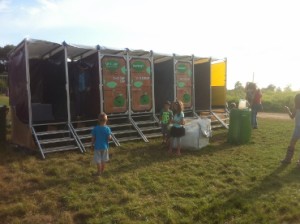 The festival site isn’t easy to get to as you have to travel some way along a fairly steep track but it is a beautiful journey through the trees and well worth it once you are there. The advantages of the site are that it is quite spread out so you never feel crowded, it also means that you can allow little ones to roam free a bit whilst still being able to keep an eye from a distance. The whole area is very picturesque with the Wye Valley and Severn Valley in the background and lots of trees plus the dilapidated ruins of Peacefield House adding to the atmosphere. Most of the site is fairly flat so fairly easy to get around for little legs but once again for people who really need more assistance there is a golf buggy ‘bus service’ to help some people get to areas they would not otherwise be able to get to. 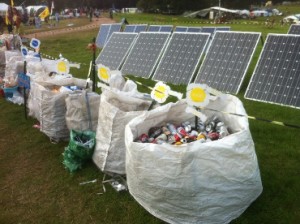 One positive addition this year was the provision of more compost toilets. The inclusion of these was too expensive for past years but with the help of crowd funding they were clean and effective even on the Sunday (when we arrived). Drinking water taps were dotted around the whole site meaning that the site doesn’t sell plastic bottles of water. This not only keeps costs down for festival goers but also keeps waste down. Talking of waste the Green Gathering but huge efforts into making sure as little waste goes to land fill as possible and so they provide big recycling areas where you sort rubbish into about 10 – 15 (sorry lost count) different bags. I think the kids even enjoyed working out which bag to put their rubbish into.

Food options are really good at GG (although full on carnivores might need a little convincing).  We sampled freshly made chai tea (surely a cliché but we will have to make it at home) from the chai café and noticed a range of curries, pizza, noodles and other solid vegetarian and vegan fair. If this makes it all sound like a load of old lentils it wasn’t. We bought a big tray of curry from the Big Pan Company for £5 and it was delicious. You could add a range of toppings and it was pretty spicy as well. After eating a fair share of our curry the kids fancied pizza, which is always a licence to print money but this was thin, tasty and cooked in a proper pizza oven.

There was a nice selection of ‘treats’ such as cakes, crepes and churros. We sampled the latter as an afternoon indulgence and were really delicious!

None of the food was overpriced and it makes a nice change to go to a festival to find that affordable food is a wholesome meal rather than just a bag of chips.

Drinks are cheaper than a lot of other festivals and there is a good range of decent ciders and beers. 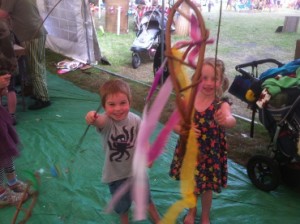 There is little chance of kids being bored in the kids area. Hazel is the sort of five year old girl that loves crafts and so was happy to have a go at making a willow fish and her brother eventually joined in and was pretty pleased with his effort as well. One interesting but remarkably simple craft was copper making and children were allowed (encouraged even) to hammer, scrape and bend to their hearts content. I am always happy to see young people using tools and our two were probably the proudest individuals in the field when they had made their little amulets. The crafts varied throughout each day so there was something to interest everyone. Another tent provided workshops making seed bombs and other crafts to get kids into wild play and environmental issues. When we arrived there was only one attendant left as all his mates had gone to find out their spirit animal! He was however quite funny and our two were happy to paint pictures using mud. 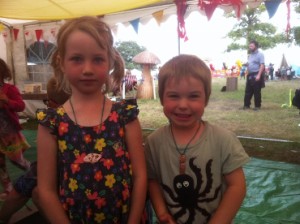 As well as crafts there is a theatre tent where all sorts of kids theatrical happenings take place and which contains the biggest array of dressing up you could imagine! There were also circus skills taking place at various times. Our two really enjoyed trying out juggling (with less success) and hula hooping (with a tad more success). GG is lovely in that there are climbing frames, cargo nets and swings from the trees which allow the slightly less adventurous kids to gain a bit of confidence. There are old fashioned swing chairs and hand powered merry-go-round and also trampolines that were always busy with smiling kids (but queues weren’t too long) although these you do have to pay for.

For the little’uns there is a separate tent and play area with more age appropriate toys, and for the teens their own adult free tent with workshops taking place.

It was great to see kids only toilets in the kids area which meant that you didn’t have to either traipse toddlers across a field or queue too long – brilliant! 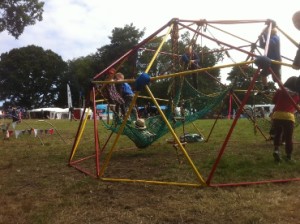 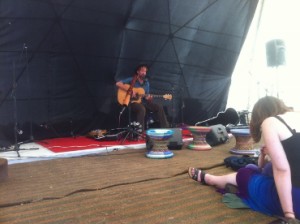 This isn’t the main focus of the Green Gathering there is so much more to do besides just listening to music but having said that there is a lot of music about including impromptu bands and singers who have ad hoc jams and performances. You might also expect the music to be all folk but it isn’t by any means and you can even join in with the UkeJam being popular. Our favourite music as a family was sitting in the Floating Lotus tent and really enjoying watching a relaxing set from Adam Scriven who plays the didge, stomp box and harmonica as well as singing. A very talented man with heartfelt lyrics who makes you realise that you don’t have to crowd surf to the Foo Fighters to have a good time.

There are several stages and tents with live music but all powered by renewable energy, amazing! 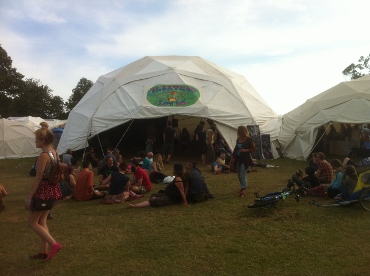 The wealth of talks, workshops, films and taster sessions is amazing and encouraging whatever experience or knowledge you have. There are numerous traditional crafts to try out such as willow work, making a rocket stove, slate pictures or learning how to tan leather. We were intrigued by the later but didn’t quite have the time for it. Most of the craft stalls require a donation but none of them seem to over-charge and there were plenty of proud individuals who came away with an item and an awareness of a whole new ability. You can even take a trip round the site learning about medicinal plants and the group we passed were enrapt listening to their guide. He seemed to spend about 30 minutes talking about hogweed which I later discovered was a plant he seems to have a mad passion about! 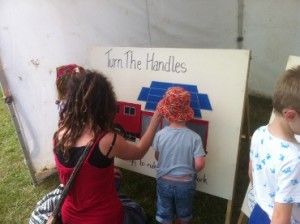 There are plenty of talks and campaigns going on and you can get immersed in if you wish or breeze by and just learn how solar power works. Nearer the fairy glade area our two were intrigued by the group of people who were centering themselves around tree spirits and doing tree hugging. Fortunately they remained quiet whilst they snuck round the grottos and mystical labyrinth. It’s all part of being at a festival and great for kids to experience how other people live and view the world.

For a real festival vibe GG has it in abundance. It is beyond consumerism and the ‘look at me’ aspect that has tainted too many festivals in recent years. The people are friendly, from all walks of life and there is plenty to do which may surprise some since it is not centred around music! There is a community spirit about the site and almost feels like a large village than a festival and the people all seem to want to contribute and engage rather than blithely being entertained. It is a great festival for anyone but would highly recommend it for families since it is a great place for children to learn and explore and  everyone there seem to be very kind and caring – isn’t that what we want our kids to be? Long live Green Gathering, Hazel and Gwilym definitely give it the thumbs up! 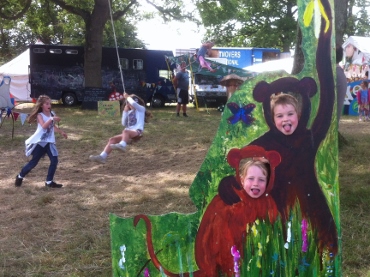