Taking 4 kids to WOMAD? Not a problem…!

Parent Review by the Dersons Family

My husband and I, and our 4 children, enjoyed a wonderful weekend of mind-blowing sounds, amazing sights and delightful tastes at WOMAD, Charlton Park.

Having packed everything required for the wide variety of weather that could come our way we arrived at WOMAD in the scorching heat and quickly had to find sunhats and sun cream.  We hired a cart to take our huge amounts of stuff from our van to the our camping spot and before long we were set up and the children were cooling their feet in buckets full of cold water!

We had paid extra for Thursday tickets and arrived at 11am, the campsite was already busy and buzzing with anticipation.

Being there early gave us and the children an opportunity to get to know the site and to take in the sights, sounds and smells. The children’s area was not yet open so could spend our time exploring. A lovely evening was finished off with an energetic dance to the Soul Rebels.

On Friday morning we eventually made our way to the world of children only to find that we should have got there earlier in order to book onto the numerous amount of craft and music workshops on offer. The children had a good look round though and then we went to the arena via the world of well being. It was a welcome relief to find the shade in the arboretum and the children loved exploring, they found a piano encased in a hut that was covered in musical instruments that they could play and they found a life size polar bear on the Save the Arctic stall. It was hard to believe that we were surrounded by thousands of people while we ambled through the trees. We walked past a laughing yoga workshop which must have worked because it put a smile on our faces.

We went to have a dance to The Tokyo Ska Paradise Orchestra and then rushed across to catch the last bit of The Peatbog Faeries.  Then we saw the spellbinding Manganiyar Seduction by Roysten Abel. We were mesmerised, especially Molly (7). Chris and I found it hard work because it was crowded and the children couldn’t see without being picked up but it was such a treat and so memorable. If you have not seen it I advise a trip to youtube! We finished off the evening swaying to Jimmy Cliff. By this point our two boys were sleeping in the buggy and baby was asleep in the sing. Molly was a trooper and stayed awake the whole evening! The fairy lights on the buggy were a success and meant people avoided walking into it on the way home.

Saturday was Molly’s 7th birthday so we were up very early! I was at the showers by 7 am where I was shocked to find an enormous queue, it seems that no one lies in at WOMAD… Usually one benefit of children waking us up at silly o’clock is no shower queue – but not at WOMAD!

We managed to get to the children’s area and sign Kester (8) and Jem (5) up for stomp rocket making and Molly for flag making. The flag making did involve 45 minutes of queueing and I was lucky that my sister scooped up my 17 month old baby and took her to the toddler area where they found paddling and ball pools. It could have got messy other wise. But we made friends in the queue and enjoyed a huge game of eye spy to pass the time!

After finishing the children’s activities we decided to settle down at the open air stage and then swapped between that and the Siam tent. This made for a much more relaxing day. Seeing Nour Nour was a highlight and it was great that the kids could go right up to the front and we were all up and dancing to the BBBs (The Balkan Beat Box).

By Sunday we were really into the swing of things and because we had done the fair rides (a treat for Molly’s birthday) and some children’s activities, we felt happy (and not guilty) about spending the day in the arena. In the afternoon we caught The Pine Leaf Boys and Chet Nuneta. My 18 month was particularly enthralled by Chet Nuneta and was copying their gesticulating!  We then relaxed in the beautiful breezy sunshine taking in the sounds of Keb’ mo.

The children were tired so we watched the procession rather than join in. It was spectacular. The evening was spent soaking up the atmosphere awaiting Robert Plant. Sadly, he didn’t float our boats, he did not seem to be on top form. However, Boubcar Traore in the Siam tent afterwards more than made up for it. Chris and I danced while our two small ones slept and big ones read by lantern light! The book stall was a life saver and both of my two older children were kept entertained reading all day and all evening while we danced the night away!

Initially I was worried about the children being at such a large festival, especially as I was struggling to find my bearings because each time we entered the arena it seemed to be from a different entrance. I needn’t have worried. The crowd was so chilled out and relaxed and the children found their way round easily. I was able to let my 8 year old and 7 year old go off together, with clear instructions on where to find us afterwards.  We brought two bottles from Frank water and it was my eight year olds ‘job’ to keep these refilled by finding the stall or the wagon where the water was. There was not a moment when I felt worried about the children and the crowds, who seemed remarkably sedate!

The children’s area was fantastic but it being separate from the main arena made it awkward for parents who wanted to listen to music at the same time as children who wanted to craft.  We actually found we had to be very organised to even get on to the children’s crafts. Most of which you had to book a place and be there at a certain time to do this. This was difficult with 3 children who wanted to do different activities, and a baby with her own agenda!  The children enjoyed the circus skills area, but we managed to miss the puppet show each time it was on. We stumbled across a lovely activity taking place in the arboretum. The children had to help some faery folk find 4 pieces of a puzzle and the last piece was with a forest sprite sat up a tree, who we found by following the sound of his fiddle. He then helped the children to make bees with pine cones, tissue paper and wool. It was a magical experience for the children, but one we
could have easily missed if we had gone the other way into the arena.

The music was world class and it is definitely a festival for music fans. There is so much music to choose from that we could not possibly see it all. We could not cart the children around from stage to stage easily so made the decision to just camp out by the main stage and Siam tent. Things were more relaxed from then on in.

A highlight of the festival was definitely the food. There was so much to choose from and it was all yummy. The children particularly relished the churros and chocolate. I’ve missed the food stalls since coming home, there were still so many meals I wanted to try.

The facilities were great. The toilets were quite a trek from the tents and my 4 year old did have a couple of accidents but that was partly due to him not wanting to interrupt his fun! I was hugely impressed with how clean the toilets were kept, there were often queues but they moved quite quickly. It was the cleanest festival I have ever been to with litter being picked up as quickly as it had been dropped.

The whole weekend was wonderful, we all had an amazing time. And, although it was at times hard work taking 4 young children to such a large festival, it was more than worth it and we would recommend it to everyone, especially festival newbies.

Reviewed by Kirsty Dersons and family 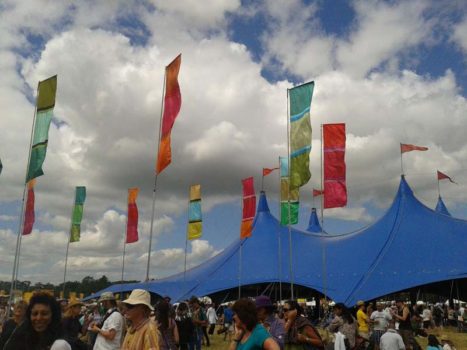 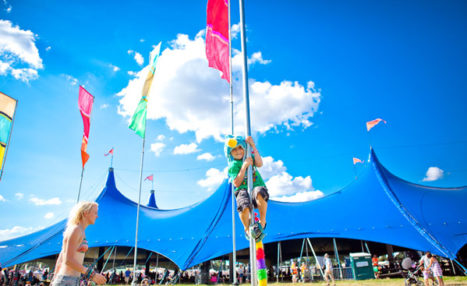 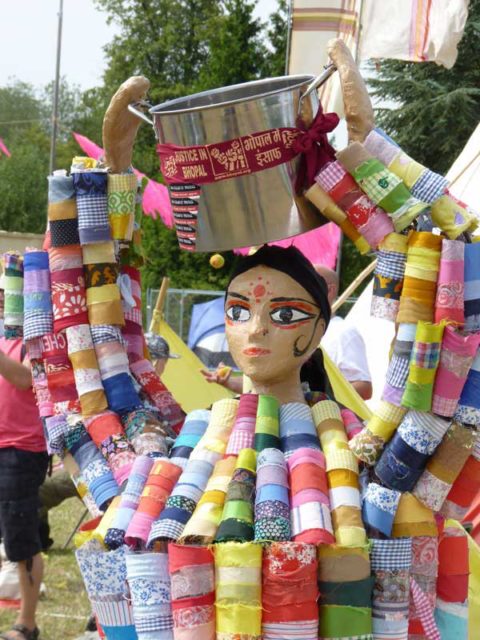 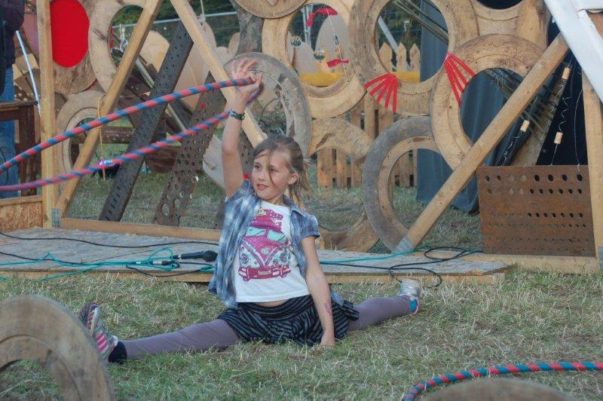 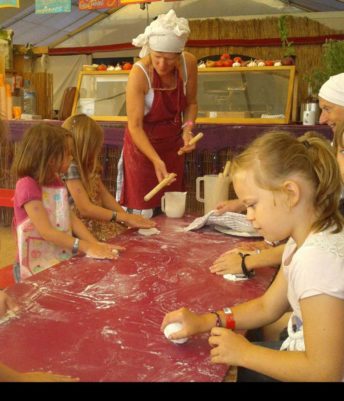 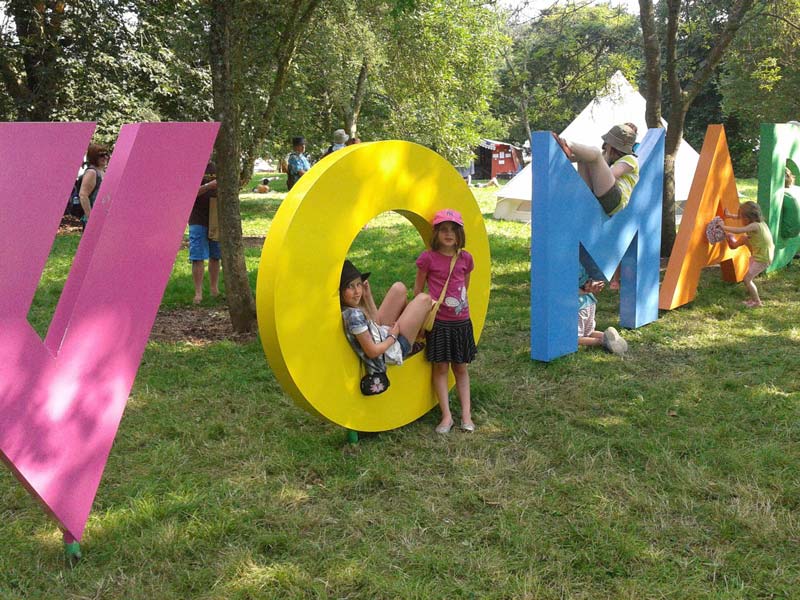