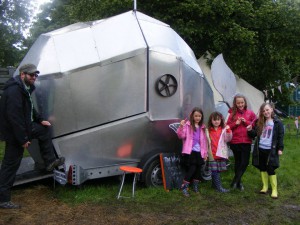 We were very excited about “the Loungeabout”, and with good reason: we were eager to see what looked like one of the most interesting line-ups of music and entertainment in the festival calendar,  located in a serene part of Yorkshire, and we were helping our friends break their (adulthood) festival cherry.

We spent many hours poring through the recommendations on festivalkidz.com to find the most suitable festival that would meet the needs of our two families; a good mix of live music, lots of activities for the kids and within 3 hours drive of Merseyside. The promise of a “refined unwind” at the Magic Loungeabout with its heavy focus on family friendly activities is what won us though.

On arrival on Friday evening we were one of the last lot into the very small camper van field (incredibly there were acres of camping but only a tiny field for campervans/caravans/sleepervans no more than 60 on the one field), as a result we had to park & pitch next to the showers, and as we found out after bedtime adjacent to two generators (running 24hrs)

First lesson of the Magic Loungeabout – get there early!

After pitching and chatting to the very friendly security staff; we wandered off to see the funktastic Niles Roger’s Chic, walking around the river to the view of the festival arena in the twilight was lovely, beautifully lit, flowers and disco balls decorating the trees and Boughton Hall softly lit as a backdrop to the huge Pringle shaped stage.

For music geeks, Niles Rogers is a legend, he has produced everyone over the last 30+ years, and his set list read as a popular music hall of fame, from Chic disco classics (Le Freak, Everybody dance, Good times) to Madonna (Like a Virgin), Bowie (Let’s Dance) and Sister Sledge (We Are Family). Everyone, of all ages was grooving and smiling, the perfect start to the weekend.

Oh and did I mention? Not a trace of mud!

Saturday saw us shaking off the hangovers and go tree climbing in the woods with the kids before entering into Angel Gardens. As usual the angels were on hand with private kids-only loos, lots of crafts, and fun stuff to do, but they were also joined this time by a theatre troupe and a hot tub (alas not one with a built in time machine!). 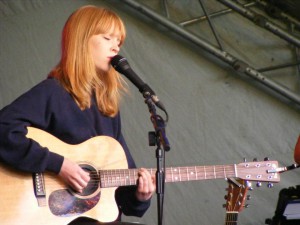 The music took a distinctly Indie twist for the day (with Techno ruling the evening), the breezy pop of Summer Camp, the sumptuous Lucy Rose (think Laura Marling with more cheer), art school psyche rock from Let’s Buy Happiness and jangling soundscapes of Cashier no.9 (all well worth seeking out on Amazon or iTunes). 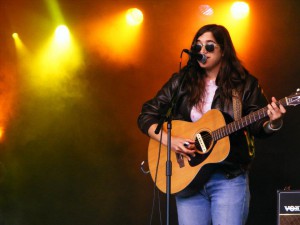 And still no mud!

Over on the Forest Fringe stage, a cross section of kid’s performers, local bands (such as the excellent electro rock of M.A.S.K.S. – see the kid’s video interview below) and short films occupied the daytime, with speakers and readings from well known authors in the evenings.  Sunday highlights included the excellent Jenny O, who performed a rare solo set (“feeling exposed without my band behind me”), Juan Zelada’s bluesy pop and Indie legends The Charlatans.

Celeste, Maddy, Maisie and Lily got hair braids and made poi then treated us to a gymnastics competition in-between bands. “Everyone is so friendly here” was Celeste’s comment out of the blue.  Maisie & Maddie’s mum Louise commented that “I feel totally at ease letting the kids roam here”. Indeed this is one of the main aims of the festival; Simon Adamson and team have worked very hard to get a lot of activities into a relatively compact main arena in the most beautiful of surroundings. 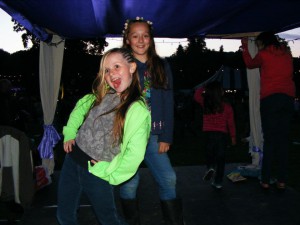 This is indeed a refined, relaxed atmosphere perfect for the kids to run wild with lots of other kids, the majority of punters being families, and even the groups of twenty something party goers behave with empathy to this.  There is still some late night raving in the dance tent, and no doubt in the party camping areas, but generators aside (grrr) the campervan area is quiet at night. 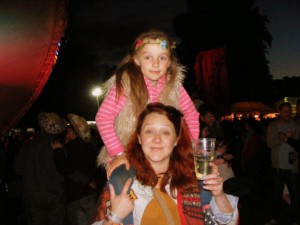 By Sunday the British weather had arrived and we were finally ‘treated’ to a little mud.

The Magic Loungeabout has its principles built upon providing a safe, relaxed environment for families to enjoy new experiences, be it Yorkshire themed games, theatre or up and coming musicians. With the glorious meandering rivers, the backdrop of Broughton hall (which became the canvas for CGI projections in the evenings) and the friendly and helpful staff – it offers a bijou northern alternative to Bestival. 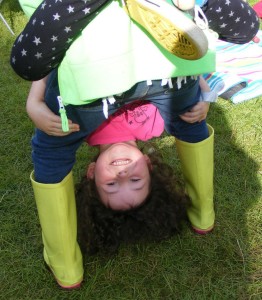 One final thing stayed with us from the weekend… whilst we were all having fun, larking around, drinking too much, eating too many sweets etc the security staff (all dressed in black tie throughout the weekend) pulled together following their manager’s death on site early on Friday, most people were oblivious to this, such was the professionalism of the security team, and indeed the festival team themselves.

Camping – 3 (Campervan area let it down by being too small and having multiple generators running constantly, it was next to a busy road and had bright lights on all night long. Some lovely spots for tents towards the hills at the far end of the site for the quietest spots, or alongside the river for serenity… but beware the gnats)

Kids Area – 4 (Less than we expected, but the Angels kept us entertained) 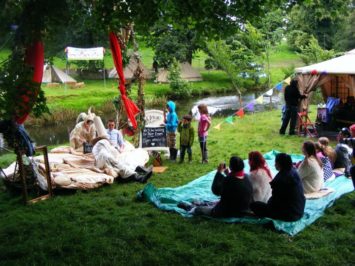 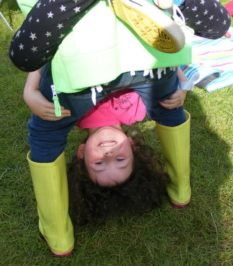 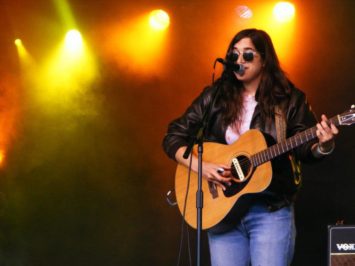 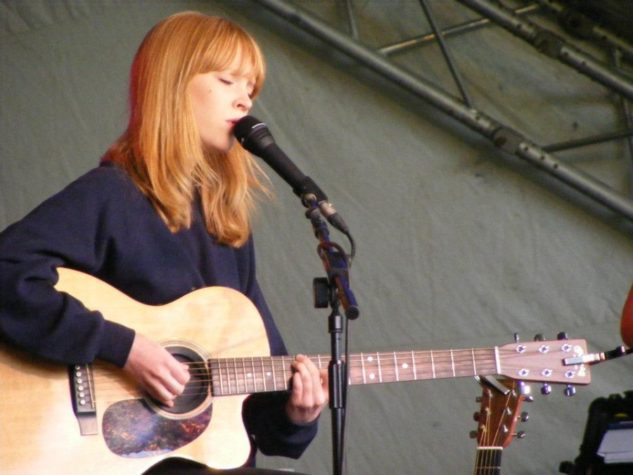 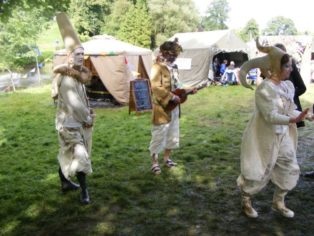 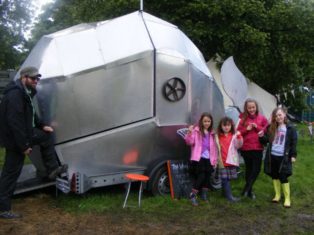 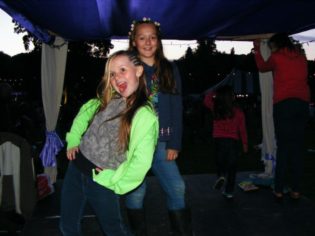 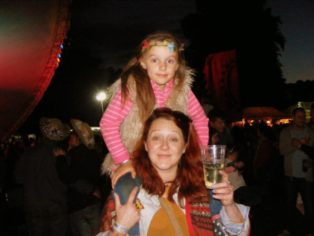 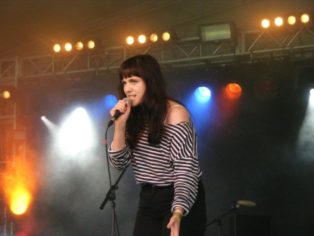 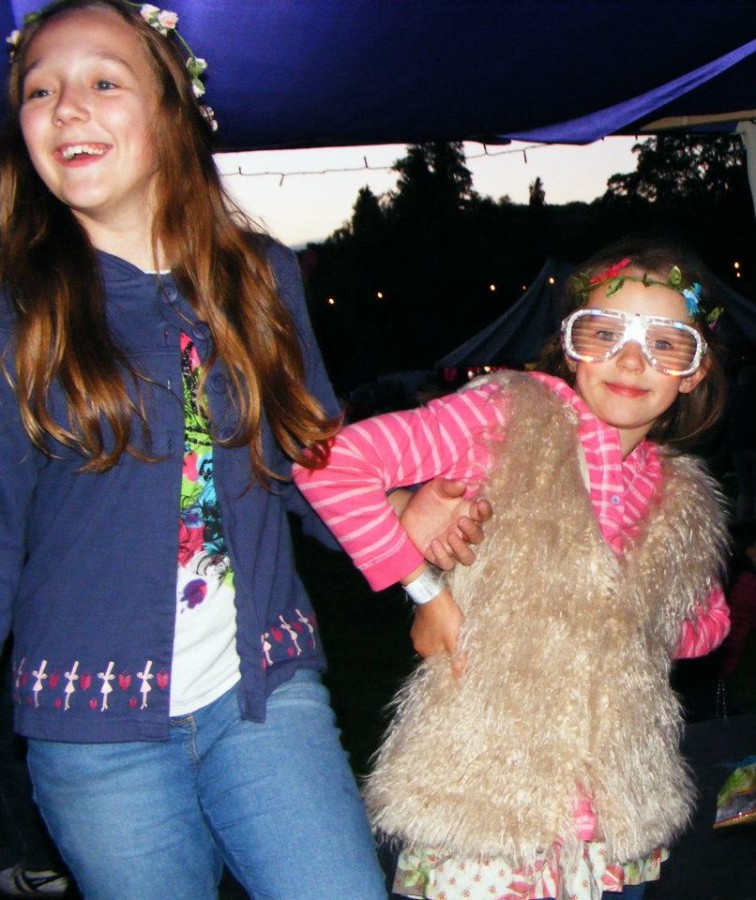 5 thoughts on “The Magic Loungeabout 2012 Review”