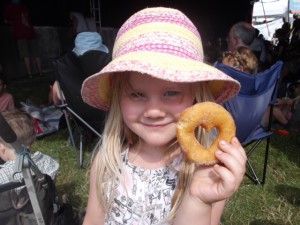 Having researched Deer Shed Festival beforehand I was very impressed with their principle: easy access, easy camping, reasonable prices, child focussed whilst still remembering the parents.  Unfortunately, a lot of festivals make a lot of claims and don’t necessarily live up to them, so, the question is was I still impressed upon arrival?  Simply put, yes, from the moment I arrived it was the simple things that made the difference, everything was straight forward.  Obvious, simple direction signs on the lead in, easy, close parking, simple access straight into the camping area without having to queue through check-in with frustrated children and arms full of luggage, plus due to the nature of this festival no need to struggle to find family camping, it was all family camping. 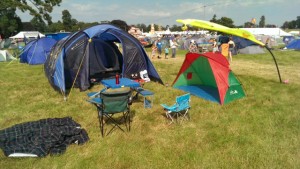 Once you are camped you then need to go to the ticket office to obtain your wrist bands, for access to the main site, yes there were large queues and unfortunately the layout did make it feel a little disorganised, but considering the plus side of already being in and camped, it wasn’t a major problem and as some festival queueing experiences can go, it was nothing!

Next, so what’s on?  Time for a program.  From initial analysis I did have a moment at £8 for a programme, however, upon closer inspection it was a very good one, plus it also came with a very handy mini guide on a lanyard, so you always had something to hand around your neck if you wanted to have a quick check of where you needed to be and when, rather than having to carry a programme around all day long.  As every parent will appreciate, any weight you can lose when entering into the main arena for the day is a bonus. 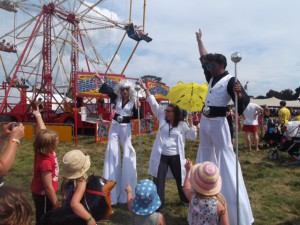 They did unfortunately take the predictable choice of placing the large fairground rides in very plain view and very close to the entrance to make sure they got you straight away.  Okay, I appreciate they are always going to be there and the kids do love them, but I will never appreciate feeling forced into it.  However, the pleasant side of this was that it was here we first became aware of what we termed the ‘Deer Shed Vibe’ as it was obvious throughout.  Firstly, the prices, not your usual bank loan inducing, captive audience abuse, but again simple and reasonable.  Secondly and most important, the staff, there was a mixture of Deer Shed staff and your usual fairground staff, however, the difference was, they were all happy, welcoming and eager to please.  Who hasn’t been on a festival fairground ride to be greeted by someone digging a huge hole into your wallet only to return it with a grunt and absolutely no effort to make you feel like your custom was appreciated or that they even cared you had just parted with hard earned cash.  However, everyone involved whether Deer Shed or fairground staff were pleasant, happy, eager and very obviously went out of their way to make your custom feel appreciated.  That sort of thing does not come by accident, whether it is something that is intentionally passed down from the organisers or it just comes from being a happy, satisfying festival to work for(or both!), both are very commendable and make a huge difference. 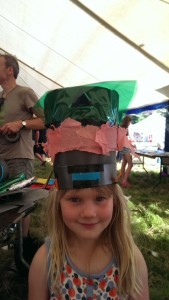 Onto the Workshops & Activities, so the theme of Deer Shed this year was Time Travel, which opened them up to a lot of weird and wonderful activity ideas, travelling both forward and back in time, they had a huge range of things available, a lot of which were very original, new and challenging, however, this is where unfortunately I did feel a little bit let down for my 3 and 5 year olds.  Though the activity ideas were great, even providing an entire science tent containing at least 7-8 activities running all day, there were unfortunately not enough of them focused towards the younger age groups, a feeling also expressed by a number of other parents I met with smaller children.  Our first activity, Futuristic Headgear making, whilst very enjoyable and creative, it unfortunately required a lot of adult involvement with cutting, measuring and taping.  Though I did have some wonderful assistance from one of the facilitators ‘Jake’, who again went out of his way to assist, as a father on his own with 2 young children it was very appreciated.

Over the weekend we did enjoy some great activities suitable for the younger age group such as Clay Modelling, lots of messy hands on play, plus Knights Sword and Shield making/painting, again hands on messy painting.  However, the others such as Paracord Key Ring making, whilst just enough for my 5 year old, was far too intricate for my 3 year old, Princess Dress making required a lot of cutting and sewing, so everything had to be carried out by Dad and finally Castle Building, again, though following their instructions, the majority of the work had to be carried out by myself.

Over the whole weekend their favourite activity that kept them entertained for almost 2 hours solid was Cardboard City making outside on the grass, or maybe I should say Cardboard Castle making.  All of the largest boxes they had were simply put out into a large open space along with lots of tape and plenty of children’s imaginations.  As every parent will recognise, they always spend more time playing with the box!

I must emphasise over all of the activities provided, I think they were all original, well thought out and well presented, it was just unfortunate there were not enough aimed at the younger age group , something to think about for next year, plus maybe an age guide for the activities would be an idea for next year’s program also. 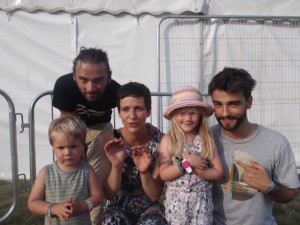 Onto the music, whilst still a relatively small festival, they managed to capture some great acts, with such personal delights as ‘Pins’ an excellent all attitude, all girl guitar band.  Followed by the modern, psychedelic tones of ‘Toy’, another intense yet very enjoyable experience.  ‘British Sea Power’ provided an excellent main Friday night act and I can easily see why they are a festival favourite, watching them was also another example of the ‘Deer Shed Vibe’, a very relaxed family feel to the crowd, where I felt completely at ease with my young ones, with lots of families all spread out enjoying the entertainment, whilst children played all around us.   Saturday provided us with the delights of ‘Eliza and the Bear’ a full throttled anthemic indie band.  Catfish and the Bottlemen were unfortunately cancelled, however, this was certainly made up for later in the day by the excellent ‘We Were Evergreen’, their combination of live sampling, electro and percussion provided a wide range of mellow, relaxing vibes through to unavoidable up beat dance anthems, which even saw my 5 year old heading to the very front of the stage to get involved, another testament to the ‘Deer Shed Vibe’, the thought of even considering that at any other festival would fill we with dread! Then having her picture taken with them afterwards got them the biggest thumbs up of the weekend from her! 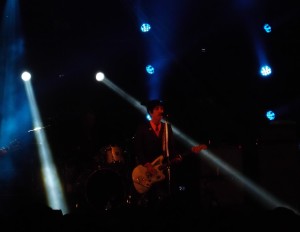 A lucky chance happening was catching ‘Sam Airey’ at the ‘In The Dock Stage’ replacing Cheeters and we were glad he did, his solo electric guitar performance and unique voice were a very relaxing pleasure at a perfect point in the afternoon.  Not surprisingly the usual Main Stage surge we are all used to was in full swing on Saturday night for the headline act of Johnny Marr (The Smiths), who performed a brilliant well considered set, including plenty of the Smiths classics we would all want to hear, but intertwined well with his own new material, all of which stood up on its own merits.

Overall, I feel honoured to have been part of the gem that was ‘Deer Shed 5’, I cannot emphasise the ‘Deer Shed Vibe’ enough, it is a combination of the obvious efforts from all members of staff, the family friendly feel throughout and the silent acknowledgement from all of the families that we are there to give our children a great time, but also for the parents to let their hair down a little too and enjoy some great music and entertainment, without having to constantly worry if the kids will be okay.

With regards to the workshops & activities, for its size you would be hard pressed to find another festival with as many child focused activities available, yes, there may have been a lack of things for the younger end, but I see that much more as something to think about and consider for next year rather than a major criticism of this year, as the huge effort gone into bringing new, original and challenging workshops was obvious and I feel should be applauded.

Deer Shed also had a lot more to offer such as many, many more bands/performers, Comedy acts, literature readings, cinema and theatre performances, far too many for me to see them all, it can certainly cater for a very wide range of tastes, whilst on a reasonable budget and a good size space to get around with ease.

The key factor, would I recommend it to my friends and would I go again?  Simply put, yes and see you next year!