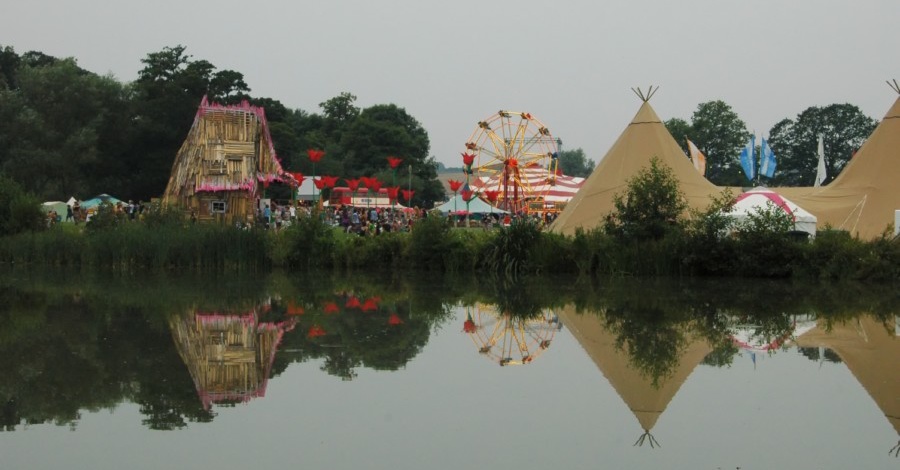 One of the more exciting but less well known festivals in the UK is gaining fans year on year. This year it sold out weeks in advance, and I would advise anyone wanting to go next year to get tickets early.

I only hope that it doesn’t grow any larger because this year it was the perfect size to create a fantastic atmosphere without feeling too crowded.

Shambala Festival gets its name from a visionary mythical kingdom in Buddhist teachings: a place that only individuals with the appropriate karma can reach and experience. And it truly feels as if every August bank holiday such a kingdom grows up briefly in Northamptonshire.

It is a festival that simply begs you to join in. Whether it is with the dancing and carnival, dressing up, crafts, the permaculture workshops, the debates, the interactive art installations or the flash mobs. Everything here is designed to encourage a fun and lively community spirit.

Although family friendly, this has the feel of an old-style festival. With plenty of hippies, new age, arty and creative types and even the odd nudist – so if you’re easily shocked be warned. This is a place for real festival goers who have children rather than those looking for a camping suburbia. 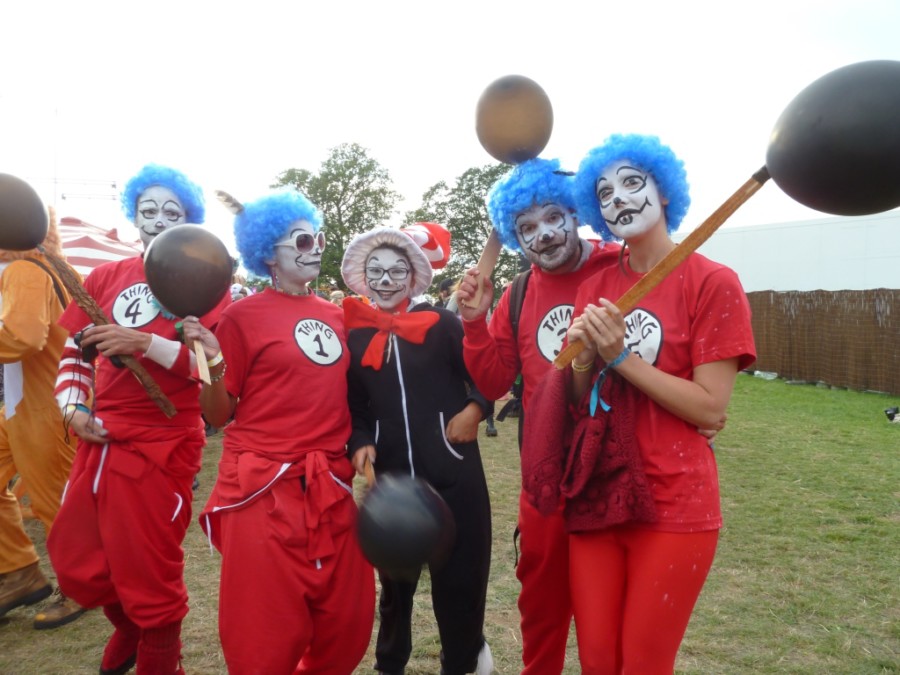 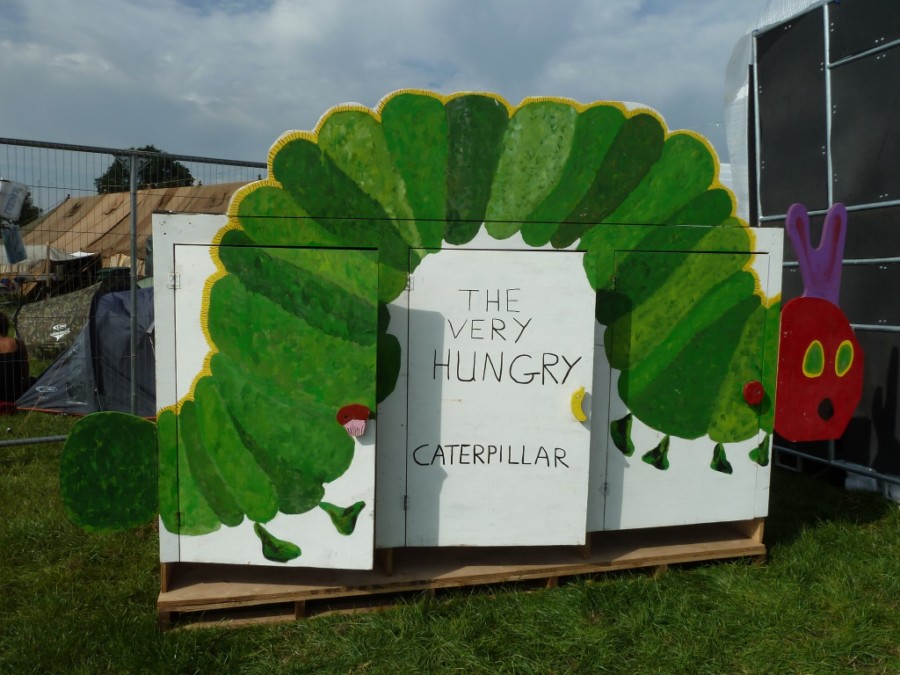 Family camping is divided into general family camping and young family camping. Which was helpful for us. It meant we were surrounded by families with similar age children and they all made friends.

The young family camping was the furthest from the site and included the Family Yurt. A great safe space for small children to play. They hosted their own song times and story times which were wonderful for the little ones. They had a family BBQ in the evening where you could meet other families, and they had their own campfire with songs and marshmallow toasting.

They also offered wood fired baths for babies and toddlers and, new this year, the Gruffalo toilets. Tiny painted cubicles that only small children could use.

Hungry Caterpillar children’s toilets were in the kids’ field, which were a welcome addition, and toilet paper and soap were replaced throughout the festival. Although they sometimes ran out so it’s best to take your own.

There were showers but the queues were too long in the morning and they closed at 7pm. It would have been useful if they’d been open later so that parents could have a shower after the children’s bedtime.

The food options were plentiful and wonderful and most offered half portions for the children this year. The only thing missing was hot food for children at the kids’ field café. It would have been great if it had offered small portions of child friendly food such as pasta or jacket potatoes. I talked to the staff there and they hope to do something like this next year. 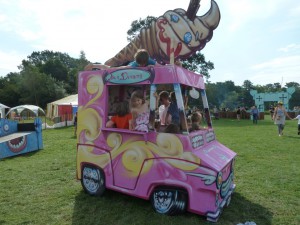 I loved that the kids’ field had as much thought and creativity put into it as the rest of the festival. There were huge pieces of art for the children to climb over (it was wonderful not to have to tell them not to climb on things!)

These change every year and this year they had a large wooden ice cream van which was a massive hit with all the children.

There was also the music maze – a musical instrument that you could walk around and hit things with sticks – which I noticed many adults enjoying as much as the children.

All the ‘walkabout’ entertainers walked through the middle of the kids’ field too and interacted with the children. Mine were fascinated with a life sized punch and judy.

A self-powered roundabout built from lots of pedal bikes welded together, a fantastic idea, trampolines, crazy bikes, parachute games, circus workshops and acts, breakdancing workshops and enough arts and crafts to keep them busy all weekend.

The workshops themselves were interesting and unusual. Eloise attended a potion workshop where you could mix a potion from a variety of labelled ingredients. When you finished the witch would use ‘activation powder’ (bicarbonate of soda – shhh) and water, to make it froth up, which was truly magical.

All activities in the kids’ field were free, even the trampolines. Shambala was the only festival we attended this year that didn’t charge extra for these activities. 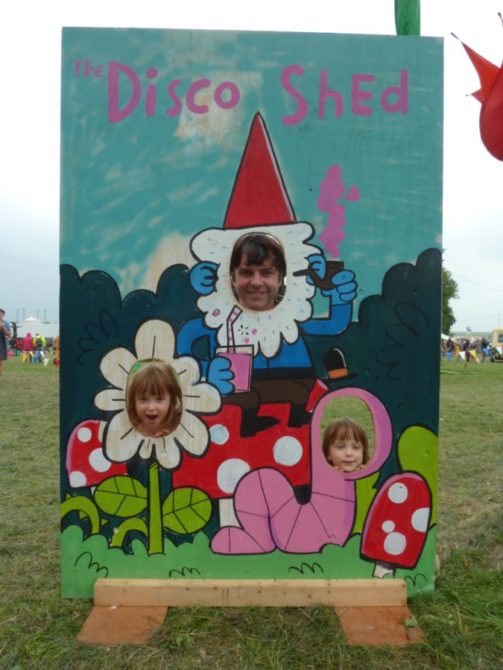 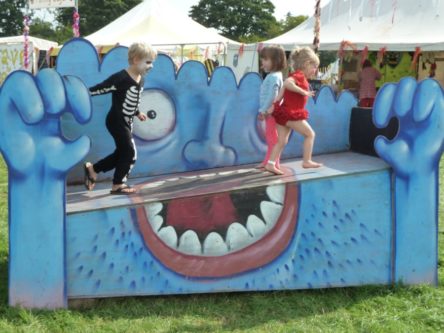 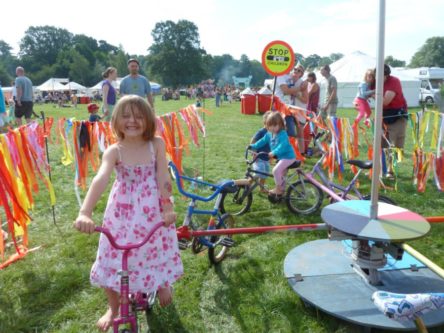 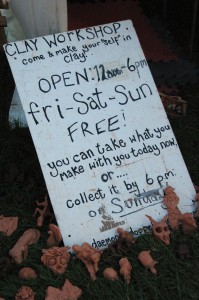 Even outside the kids’ field, the whole festival was like a giant play area for both adults and children. Adults played and had fun and children were welcome everywhere.

There was a sandpit in the main part of the festival overlooking the lake, a crazy golf course, swingball games, and large interactive games throughout the site. The puppet show tent had children’s shows during the day and then adult shows at night. Similarly the playhouse and cinema tent started with children’s shows and ended with cabaret and adult films.

The enchanted wood was a lovely place for families in the day, only turning into a dance area after dark. It all felt very safe and I saw many parents with children sleeping in buggies while they enjoyed the music late at night.

We used the crèche last year, and we booked it again as it worked out so well.

This year the rate had gone up slightly to £7 per hour, but for 3 hours child-free at a festival it was still very good value. As soon as my eldest daughter, Eloise, saw the entrance in the kids’ field she became very excited and actually asked if she could go in.

It was so lovely that the staff were dressed up as bees, continuing the festival spirit for the children, and our children absolutely loved it there. At the end of their session they emerged happy and glowing and clutching bees they had made or drawn.

In exchange, we had 3 hours to enjoy parts of the festival we couldn’t take them. We saw some bands and performances at the playhouse, chilled out in the healing area of the Meadow and joined in with silliness and dancing at the Bearded Kitten stage. 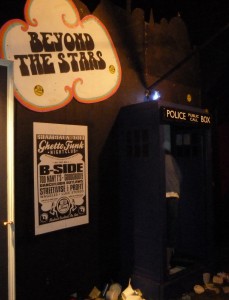 With so many stages playing different types of music there is something for everyone. On the main stage we saw the wonderful Shambala Beat Box orchestra, and I was pleased that I managed to see some of the legendary saxophone player Courtney Pine’s set.

Also quite a lot of the music wasn’t in the programme, and bands and DJs popped up everywhere at secret gigs for those in the know. I missed Electric Swing Circus on one of the main stages but I found out that they were playing again at midnight in the Swingamajig (a secret swing venue). Managing to squeeze into the tent right at the front of the stage, I danced in the packed-out tent with so many grinning fans. Sometimes the band members climbed out into the audience to dance when they weren’t playing. It was such a special experience.

This was truly a festival for people who like dancing. Music played in packed tents throughout the night but there were enough venues that nowhere was ever too crowded. The early hours of the morning were not a place for small children like mine, too busy and noisy for them. But I managed to sneak out after they were in bed to find a completely different Shambala, as many of the venues only opened after dark.

Finding the secret venues was great fun. There was a secret dance floor out the back of Hung’s laundry (yes an actual Chinese laundry!) and another one you could only reach through the doors of a Tardis phone box and down a long narrow tunnel.

My favourite was the stage in the enchanted woods which allowed you to dance out among the trees lit up like a magical fairyland. 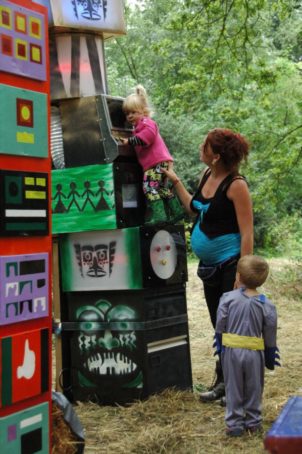 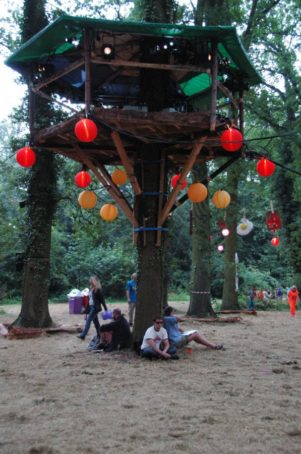 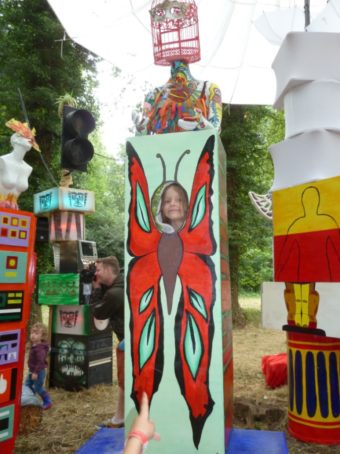 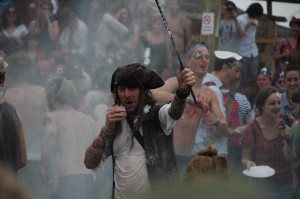 I love a festival with a sense of humour and Shambala does creative silliness like nowhere else. They have an entire stage devoted to it – the Bearded Kitten.

It is more like an arena than a stage as viewers stand on piled up hay bales around it. This year it was in the shape of a pirate ship and the ‘ring master’ was dressed like a disco version of Jack Sparrow.

The whole audience were dressed as pirates and wenches and everyone was willing to pitch in for a turn at something – whether that was glitter wrestling, dance-offs, or a simple tug of war. Eloise and I joined in with the tug of war briefly, which was great fun.

The silliness pervades everywhere at Shambala. Walking past the workshops I noticed one tent that was advertising a nipple tassle making and dancing workshop and ‘spoonami’ – how to create world peace by playing spoons.

I loved the telephones scattered across the site for you to call an unwitting festival goer. It was fun watching people’s reactions to a ringing telephone in the middle of nowhere. I saw a child answer one and sing ‘twinkle twinkle’ to the caller on the other end, then hang up!

I walked into a tent that had a sign ‘Lost and Found’ and I found myself in front of two men in shiny tights, spangly hotpants and covered in clothes pegs (don’t ask why!) who were interviewing for a new New York detective. I stumbled out 15 mins later wearing a badge with my new detective name (Detective Bazookini) having learnt the correct pronunciation of the word ‘cwawfee’ (coffee!).

There were so many of these little interactive performances and I don’t want to describe them all as it would spoil the excitement – you just have to go and experience it for yourself. 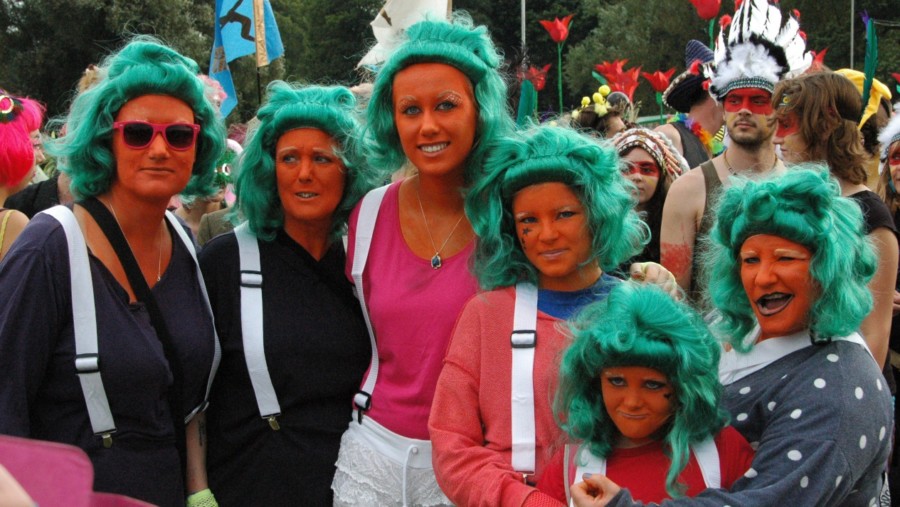 Saturday afternoon saw the Shambala carnival, and the theme this year was “The lost tribes of Shambala”, which allowed everyone quite a free rein on costumes. There were tribes of bees, superheroes, mr men, ‘missing people’ milk cartons, ninjas, oompa loompas.

I especially loved it that all members of the families joined in. Many people stayed dressed up all weekend; the imagination and effort put into the costumes was incredible and greatly entertained the children. 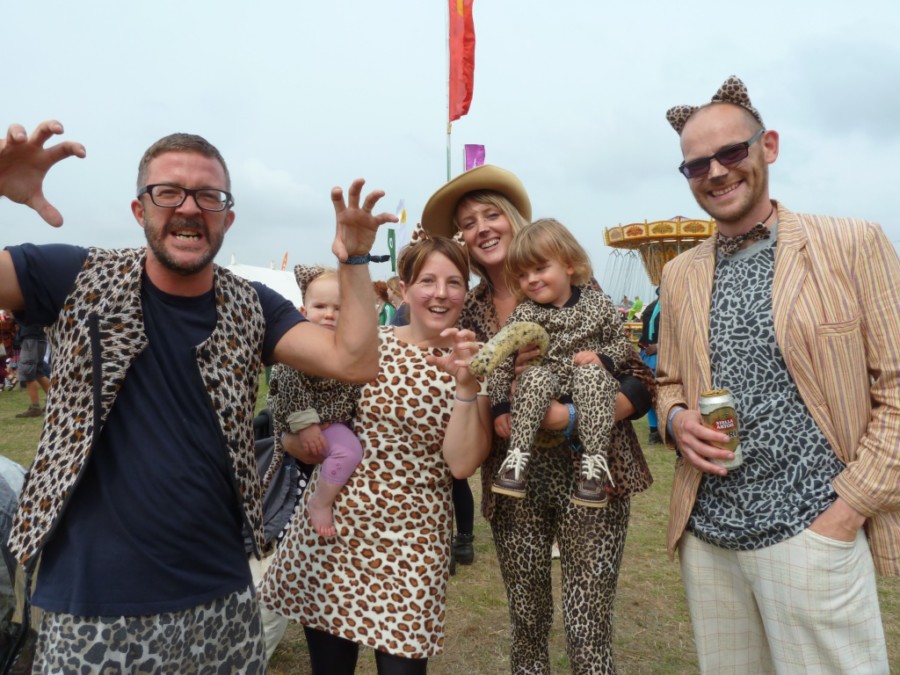 My favourite part of the festival was the outside dance stage. This held dance workshops continually throughout the weekend to a large costumed audience. It was entertaining to watch or to participate and I was compelled to join in whenever we were walking past.

Apart from the more conventional dancing such as the Charleston and Bollywood, they also had the Pirate booty shuffle and, my favourite, 80s power ballads. Imagine hundreds of people learning how to punch the air during Total Eclipse of the Heart, then pretend to fall down heartbroken – it was hilarious.

Describing everything in detail would spoil the fun for you next year so here are a few of my highlights:

So much effort had gone into making this festival special. It’s difficult to describe how amazing the weekend was, other than it felt like you were somewhere anything could happen. 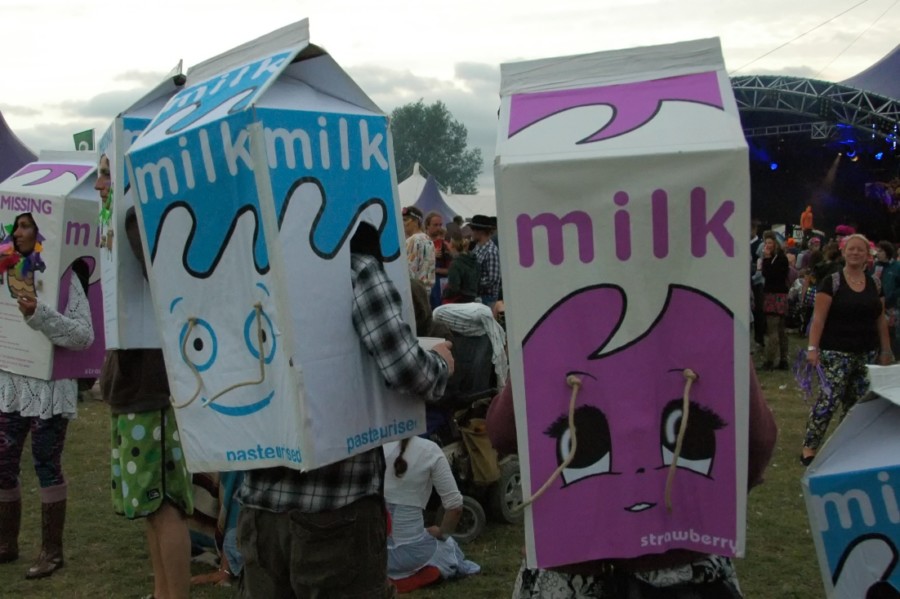 See our Facebook page for more photos of Shambala 2013

Read the Shambala Festival factsheet for more information about the festival