By Tim Kaye, Caroline Gilbert and Hazel (6) and Gwilym (4) 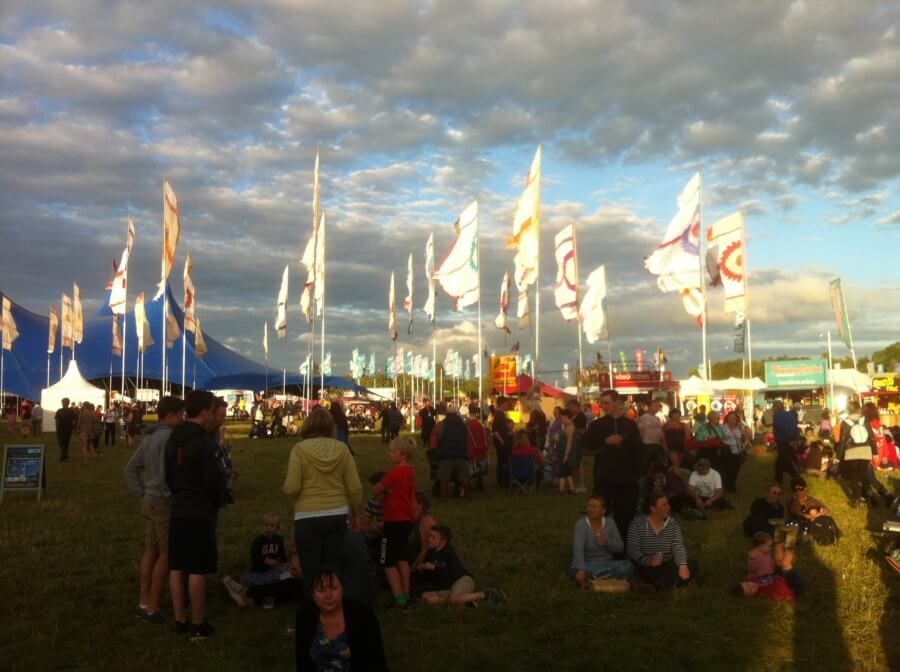 Organisers the length and breadth of the country dread the rain when they have put on an outdoor event. It’s easy to miss the essential spark of a particular festival when you are soaked to the bone and the kids are moaning.

This is what it was like last year but we came back undaunted. Keen to sample the WOMAD atmosphere to its full effect.

And lo! The sun shone, well mostly, and it was brilliant.

Having wanted to come for such a long time it lived up to expectations and more importantly provided the children with an unforgettable experience. 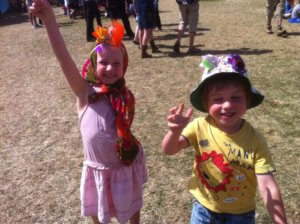 In a word – painless.

There is nothing more irritating than having driven for miles only to be sat in a queue for hours waiting to get in.

For us we picked up our tickets, drove round to another gate and onto the site with our newly installed van. It was then a case of finding a spot and putting on the kettle.

For those camping in the family area, it is only a short walk to a flat field with lots of space.

Toilets are plentiful and it is not far to walk into the arboretum and the festival proper. At night the family area is quiet (most of the time anyway). There are showers although picking the right time to have one is crucial.

There is a disability access area which leads directly to the south east entrance of the festival. One user did mention that it would have been helpful to have small ramps to get on to the board walks. Most people seemed to think the festival was fairly easy to get around.

There is also a glamping area which is a growing market at most festivals. 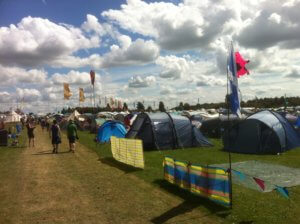 After last year Peter Gabriel was keen to shift things around.

The main stage had moved and more emphasis was placed on the arboretum and tying it in with the festival arena.

For those who really struggle with even the cleanest festival toilets there is the option to pay a bit more to use the La Di Da Loos which say they are ‘loos fit for royalty’.

One thing we did notice was that there was a lack of toilets in the arboretum area when we were round the Ecotricity stage. We were having such a lovely evening amongst the worlds trees, sipping our wine cocktail. In anticipation of the ‘I need a wee’, and a long trudge to a distant facility, we moved to an area that was more stocked with toilets.

We did sample the showers as we were at the festival for five nights – wet wipes are only a temporary fix. They were warm and we didn’t have to wait too long (with a bit of tactical ‘off-peak’ showering)

Overall the facilities are great. Separate tents for toddlers and a beautiful tepee for feeding babies quietly.

The site itself is flat with an opportunity to go from the relaxing World Of Wellbeing to the hectic fun of the fairground; something we didn’t partake in though other parents did. Spending a lot of money in the process.

There is hardly any litter anywhere. I should mention perhaps it’s reflective of the more thoughtful nature of the clientele as well as the dedicated volunteers.

This year WOMAD revealed an app for the first time. This helped with planning the day, reading more info about artists and cutting down on the size of the paper programmes but it was a shame to have to refer back to a screen for information.

You couldn’t accuse WOMAD of having a narrow range of food and drink. Like the music it ranges from Jamaican to Swiss, Japanese to Indian. And a festival wouldn’t be the same without a sheep’s milk ice-cream from the amazing Shepperds.

Meals are around £8-£9 but with a bit of searching you can find a cheaper £5 bowl of noodles. Some stalls have children’s portions.

The drinks in the main area retail at around £4.50 which is not unusual for a festival pint. There is one thing for sure that if you like good food you will love WOMAD.

For those of us with not as much disposable income, eating out at any festival can soon add up. We cook our own food most of the time, with a meal out on the last day as a real treat. The kids tucked into an organic lamb burger whilst we went for a dorshi dumpling meal all the way from Bridport (via Japan) – delicious!

The World of Children is well run and provides a variety of activities for children and I can safely say that they tried a lot of them. 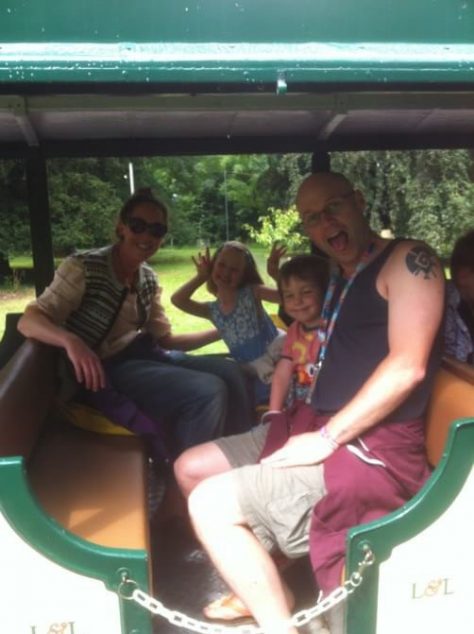 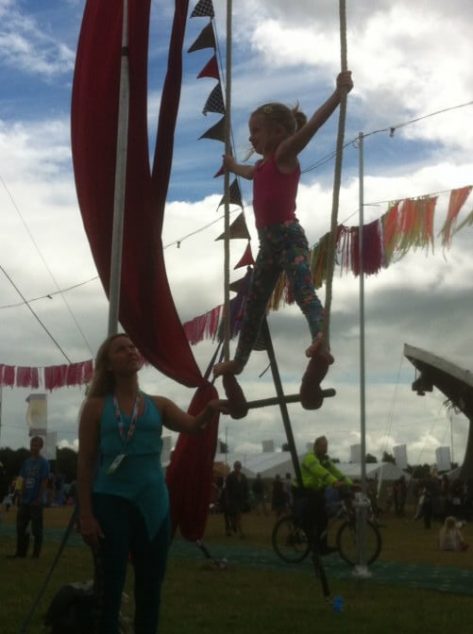 New this year was a small butterfly house which housed a variety of Brazilian butterflies including the larvae. Gwilym was amazed at a caterpillar that had the head of a dragon and the body of a bear (Owl butterfly).

While this was going on our older daughter Hazel was adamant she wanted to have a go on the trapeze. Even the 45 minute wait didn’t put her off. She was stoked after she had done the spider, mermaid and star in the ropes.

Activities which are always available are the large puppets (which anyone can manipulate), circus skills, the big rig music apparatus, an ever changing programme of crafts & dance workshops, as well as train rides around the festival site.

The craft tents border the childrens area and are a wonder to behold. This year’s theme was Brazil so many of the activities revolved around making parrot head dresses and similar for the amazing carnival on Sunday evening. 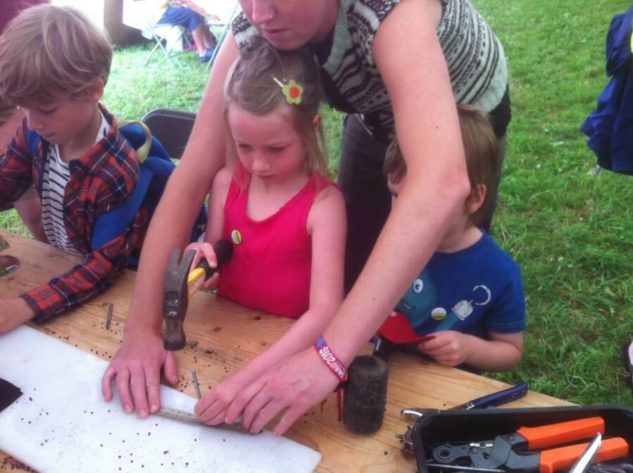 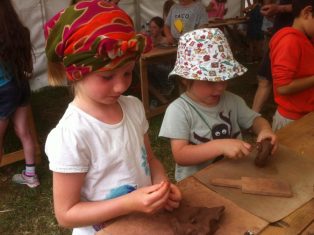 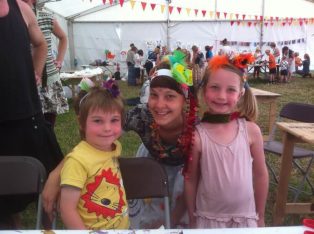 Our two wanted to have a go at leatherwork with Brian and made a superb purse each. They both enjoyed it so much they came back the next day and made a bracelet. We thought it was great to learn a proper skill like this at festivals, sticking and cutting has its place but the pride they had with their useful creations was overwhelming. Unfortunately Gwilym lost his but that’s another story!

Some of the workshops you must sign up for in advance, and although we missed the slot of cape and skirt making with ‘shake your bon bon’ they were more than happy to accommodate our children in making some flower head dresses on the side. 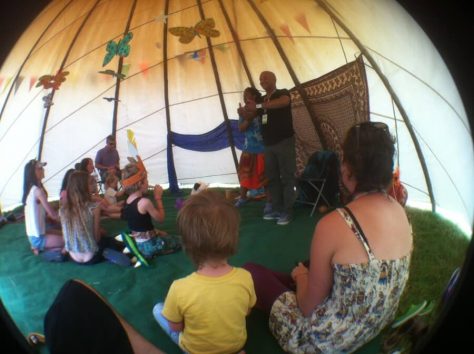 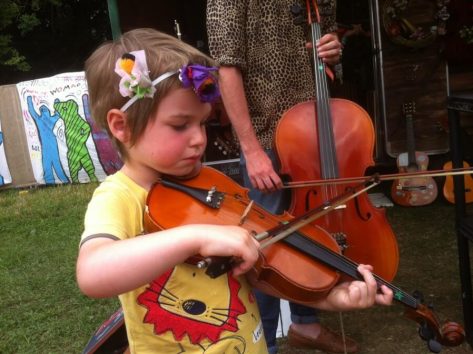 On the last day we thought it would be good to sit down and watch something as everyone was flagging a little. We were lucky to be in time for Amantha Edmead who specialises in African and Caribbean stories.

Through her interactive storytelling she had the children and adults spell bound and when we were home Gwilym said it was it was the best thing he had done.

Another highlight was being able to try different musical instruments. Hazel and Gwilym really liked having a go on the violin – who knows perhaps one of them will be a fiddle player later in life.

Sometimes festivals offer an opportunity or an activity that wouldn’t happen in their day to day existence and broaden their mind – perhaps going to festivals should be on the national curriculum?

For younger teenagers there is a teen tent but there were plenty of teens just enjoying all the other aspects of the festival.

With artists from 49 countries we introduced the children to a wealth of different music.

Kicking off the festival was the Malmesbury School Project. How brilliant that a festival will be so inclusive towards families that it is children who start the weekend’s excitement.

We loved watching the Grit orchestra who played the music of Martin Bennett who sadly died at a young age. The original record is a mixture of traditional folk and electronic music but transformed by a huge orchestra it was a spectacle to behold and music that must be listed too. 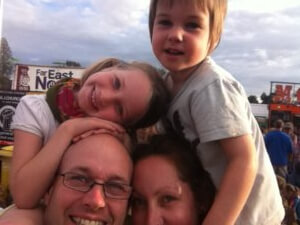 One of the highlights was Baaba Maal, a well-known performer. The sun was shining the music was fantastic, the kids were happy and a neighbouring mum even turned to us and said ‘this is just perfect’.

Later on I had a highlight all to myself watching George Clinton and Funkadelic. Many people I have talked to have never heard of him but his music has been sampled to death over the last 40 years or so. It’s great to see a 76 year old man and his group still performing their hits.

The Children certainly enjoyed Hot 8 Brass Band a US collective who work popular hits in to their funky repertoire. It gets a bit hard on your shoulders having a 4 and 6 year old dancing on them but worth it so we could all get a flavour of the band. 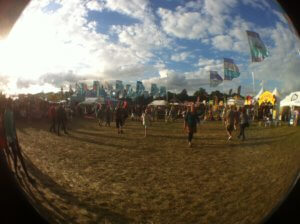 Many of the musicians also do workshops such as the vibrant African Dancing by Landing Mane. The girls of the family enjoyed doing dance steps to the polish folk music of Muzykanci.

I should have got involved myself as the dance steps looked fairly easy even for me. It was shame that we couldn’t see their full set later on but the dancing was a great compromise.

Gwilym got his place in the sun when he saw Gwilym Gold in the Bowers and Wilkins stage. There aren’t many people of that name and his music was pretty interesting as well.

It was exciting to watch the Radio 3/6 simulcast on Sunday where Cerys Matthews joined Mary Ann Kennedy and Lopa Kothari to introduce a variety of artists to ply their trade. The music on offer was varied and Hazel especially enjoyed the passionate singing of Buika. Thanks to the BBC for allowing families all over the country to be immersed in world music.

Perhaps unlike other festivals WOMAD is a space where you can wander in to a tent with no preconceptions – you may like it, you may not but there are plenty of other things to listen to later. You won’t necessarily find yourself ringing a programme for those favourite bands but you may end of thinking why haven’t I ever listened to Tuvanthroat singers before!

There seems to be a drive recently in introducing science to festivals goers and the new area this year was the Physics Pavilion. We didn’t have the time to go in but our friends little boy was engrossed in the light sabre activity, so we will have to try it next time.

We also tried several times to get involved in the kids cookery classes but were too late each time.

The World of Words wasn’t quite as accessible for young children, though it does show the wealth of things that the festival has to offer.

One unusual thing we did was participate in an art installation where we got slowly pushed round a track and stared up at the trees – not something you do every day beautiful and relaxing.

WOMAD is very friendly festival which has an obviously multi-cultural and inclusive vibe. Our two loved it. They said the best thing was the music and storytelling; it left a big impression on them.

Within minutes of getting home they were recreating their versions of what they had experienced over the past 4 days.

There was no agro or too many drunken people and we never once felt that the kids were unsafe. The sun helped, of course, but this might have been one of the best festivals we have ever been too. 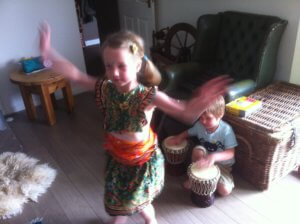