This month I was arrested, hired a lawyer, attended my trial, was found guilty and prepared for my execution. However unlike Josef K there was a happy ending for me as I enjoyed a glass of wine with other survivors of Retz’ The Trial, an immersive theatrical experience based on the Kafka novel where you take your own part in the play as one of the accused.

My love of immersive theatre has grown since discovering it at Glastonbury Festival, the most wonderful innovative event that most people think is just music but is not. It is also theatre, art, ideas and free-thinking. There I found a love of many things I had never seen in the main stream arts: contemporary perfomance poetry, puppetry and mime.

It was there I discovered immersive theatre where you are drawn by the actors into the play yourself, forcing you to use your creativity and imagination to make up your part in the play. It’s exciting, it’s thought provoking and most of all it’s fun.

Educational, creative and fun? I believe most of you will agree that this is what we look for in children’s entertainment. A child’s love of role play makes this an ideal form of theatre for them. I’m sure all parents have at some point joined their children to become pirates on a ship or train drivers dropping off passengers.

Recently I was huddled under blankets with my three children in their play tent, sheltering from the blizzard and polar bears outside and drinking hot ice cream soup (their imaginations not mine!)

As soon as my eldest daughter was old enough I have been desperate to share my love of theatre, and have tried to find appropriate events for her age.

The South Bank Centre offers special shows for children as part of their Imagine festival and she has already attended several events such as the Dinosaur Petting Zoo, where the children can meet the extremely realistic puppets; and Beastie, where a group of children is taken out around the South Bank for an adventure by a large friendly monster.

Immersive theatre is definitely becoming more mainstream. The popularity of Secret Cinema (events where the audience dresses up and participates as characters of the film they are seeing) has grown to a point that it now runs sold out performances for weeks, and the National Theatre has recently supported productions from DreamThinkSpeak and Punchdrunk.

But all these are adult events, and it is still festivals that lead the way in introducing the art form to children.

There are hundreds of child friendly performances at music festivals – House of Fairytales for example run regular child friendly events at festivals and last year Secret Cinema took over parts of the Wilderness Festival with a Bugsy Malone custard pie battle.

At Shambala Festival my daughter was fascinated with Videopia where festival-goers dress up as characters and perform a amateur version of a classic film which is recorded for them as a very silly memento. She asked to be dressed as a dinosaur for a small role in Jurassic park (pictured right).

So I was thrilled to find out about Land of Kids, a new children’s festival this Bank Holiday Monday featuring some of the best names in immersive theatre, who are putting on performances tailored specifically for children. Lost & Found are running a Pirate School for trainee pirates, Punchdrunk have storytelling balloonists, Sink The Pink are doing UV aerobics and Momma Loves are offering ‘Mad Hatter’s unbirthday parties’. All this as well as a huge range of other interesting activities, such as The Lost Picture Show’s silhouette animation workshop, a pop up zoo from the animal onesie specialists Kigu, a children’s disco run by Disco Loco, craft workshops and music.

Land of Kids is an addition to the already popular Land of Kings, the adult version of the event in Dalston which is a part of London well known for it’s creativity – Punchdrunk set up their pop up ‘fake’ magic shop there, Retz’ The Trial was performed in those streets and it is the home of the great Arcola theatre.

But it is also a part of London which is full of young families and I would urge all parents not to miss out on this amazing opportunity, to fill the streets of Dalston with our children and get them excited about the arts and theatre.

Show your children that this is not a world where we are forced to sit in a seat and watch other people. It is a world where we can get up, get active, get creative and most importantly get involved. 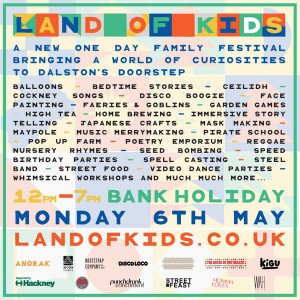 6 thoughts on “Immersive Theatre for Children”