By Zoe (mum and festival trader)

Taking your kid to a festival can be a brilliant experience for all, although there can be a few ups and downs.

Last year we took the experience a stage further, and took our 5 year old daughter to Wychwood Festival in Cheltenham – where we were to also be traders for the weekend.
We tried to prepare for any eventuality, weather etc. We asked her to pick some toys and things to keep her amused. Van and car loaded to the gunnels with stock, bedding, food and toys, we were ready to go.
Cutting to the chase, we drove down on a lovely sunny day, which got steadily warmer, and by the time we arrived, the sun was beating down, so we had to get the stall up quick to give us some shade. We were situated in a brilliant position, right next to the main stage. What we didnt think about were the drawbacks to our pitch.

Boredom was our first problem. Stuck on a stall all day, our little madam, who had brought toys, books, colouring pencils and more, was no longer enamoured with any of these things. She became crotchety – and when a sudden gust of wind swept across the field, blowing dust everywhere and gathering one of the other traders stalls into the air with it, she burst into floods of tears… overtired!
Evening came, and with it, the realisation that we hadn’t been hooked up to the electricity supply.  Fortunately we were prepared with a charged striplight and torches, so after a quick bite for supper we took it in
turns to pop over to the portable loos with the torch, and bedded down in the stall for the night. 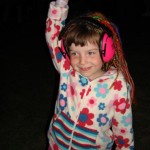 Friday morning… we came to the conclusion that we would be better off sleeping in the van.  The noise of the wind had kept us up all night, however our little lady slept right through and was raring to go!
Firstly, she wanted to sit in the stall and be shopkeeper. However, trying to explain to her that she couldn’t sit in the middle of the customers walkway didnt go down too well. Trading commenced, and the bands started on the stage- approximately 15 ft from the side of the stall. We got our electric hooked up Heath Robinson style from a live lead from the side of the stage, so I breathed a sigh of relief.  We had light! But we had forgotten madam’s Ear Defenders, so dad had to hike up the field and fork out 15 quid for a new set!

By this point we decided to stand out and watch the bands from the front of our stall, and took turns in serving cutsomers, while the other took care of the little one- who wanted to watch all the bands, although she moaned about her ear defenders, but did enjoy the Levellers very much and had a little jig about with her torch held up as her own spotlight. 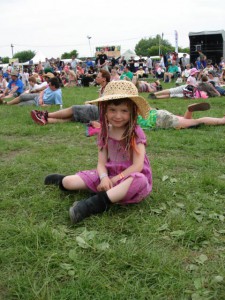 Saturday…More of the same. A touch of sunstroke made for a sickly second day, then grumping about until dad took her to have a go on the inflatable slide- on which she then chickened out and had to be rescued!
Great music cheered her up in the afternoon, along with a bribe of ice-cream then chips. By the evening she had met some musicians, ran about with some other kids and generally got into the festival vibe. The Happy
Mondays didnt go down too well though, as she was tired, and could’nt sleep through their set, and I think we were all relieved when the evening came to an end. We piled into the van –me and dad sqashed in either side
of madam, who was impersonating a starfish and hogging the bed!

Sunday…Hurrah, the last day of trading! Up early with the heat, I did a bit of litter picking, then as my fellow campers woke we readied ourselves for Justin Fletcher’s appearance. Our youngster got more photo
opportunities, and was also interviewed by a film crew, which she took in her stride.  It got a bit cooler in the afternoon, and during a rather rousing set by a celtic/world music fusion act called Kila, the heavens opened, and  10 minutes of monsoon and chaos ensued. People clustered inside our stall for refuge, and my hubby ran about pushing up the tarpaulin to get rid of the rain pools that were forming.  A river decided to make its way through the floor of the stall, and I ran about like a thing posessed lifting baskets and boxes off the floor. And through this, madam stayed calm and collected, enjoying the procession of belly dancers and street performers that passed by outside.

The rest of the day passed without a hitch. The weather brightened, and we saw out the evening by having a family knees-up outside the stall to Dreadzone. We slept like logs, and woke refreshed to pack up and make our
journey back to North Wales, fuelled with sausage sandwiches and instant hot chocolate!

So what did we learn from this?

Be adaptable. Think on your feet. Be prepared for the elements, noise, boredom and fatigue. Keep a cool head. Don’t panic.

And would we do it again?

You betcha! An excellent family festival with very helpful organisers and stewards, and if you just think ahead a bit when you are taking kids, you would have a most enjoyable time… Our little lady has already started asking how many sleeps until Wychwood, and if that isn’t a good endorsement, I dont know what is!

3 thoughts on “Wychwood – through a festival trader’s eyes”