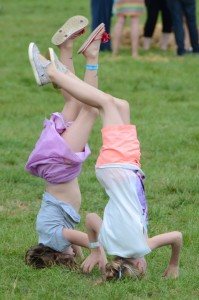 It’s just something about the atmosphere, the mix of people and the imagination of its creators. You get this right and you see magic happen, and that’s what Chilled in a Field manages to do every year.

I believe the main reason for this is because it is currently a non profit venture and run purely for the love of it – much like Festival Kidz in fact!

Chilled had moved to what is hopefully now its permanent home, at Bentley Wildfowl & Motor Museum. I’d never visited the park before but would like to return, as it was truly a beautiful site, and perfect for a festival.

The campsite was thick lush green grass (I’m speaking as a festival veteran and it was by far the best we’d ever camped on) and was right next to both the car park and the field with the stage and entertainment. Added to that, there was an adjacent piece of woodland to explore, and public footpaths across fields that you could wander along if you wanted to get out into the countryside.

We were told that a festival wristband offered free entry to the museum and gardens themselves, but we were enjoying ourselves so much we decided we’d come back another time to visit them!

There was a proper flushing toilet block near family camping, which was an amazing improvement on last year. There was also a large disabled toilet cubicle next to the kid’s tent which perfect as even my four year olds could use that without help. The toilet block did get blocked and out of use a few times but they quickly fixed them, and we didn’t have a problem with them although a few people did complain. There were two shower cubicles which we didn’t try but I was told they were cold – however in my opinion a shower at a two day festival isn’t really essential! 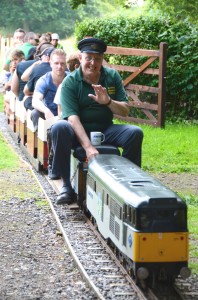 What can I say? There were miniature trams, electric and steam trains running round the site. One of the trains carried a tiny dog called Fudge who delighted the children in his cute little coat. The train cost £1 per person but was well worth the money and a genuine treat.

The main stage was now outdoor which was a massive improvement, and you could watch the bands from anywhere in the field. The DJ tent and bar was top notch as usual. But they’d also added an acoustic woodland stage lit by fairy lights right in the heart of the woods, so you could sit on tree trunks listening to the music while your children foraged for blackberries.

Last year the activities were a little sparse, but there were many more children this year, so they put on a lot more – so much in fact that we we missed quite a lot of it! There were the usual arts and crafts workshops, but also guided nature walks in the woods, science workshops, dance workshops, storytelling and circus skills workshops. The girls were particularly taken with the cup phones they made, and used them to communicate with random people all weekend.

I admit that when I first saw the inflatable slide my heart sank, as with three children the additional costs of rides quickly add up. But I shouldn’t have worried – at Chilled in a Field the slide was FREE! A free bouncy slide is the very definition of a good time for my children. There was also a large tent full of activities and crafts, a sand pit, circus toys, and The Rig (large musical structure made from junk that you bashed with spoons) all of which kept them occupied all day.

One thing that was commented on – there’s not so much for the older children to do. This wasn’t a problem for us, as our children are 7, 4 and 4, but I think that if your children are 10 and above you might struggle to keep them occupied. 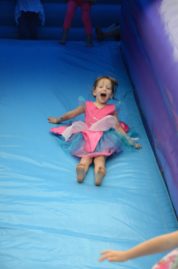 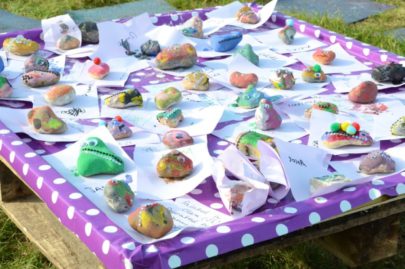 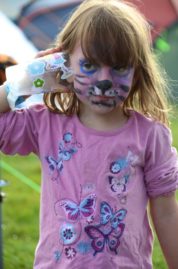 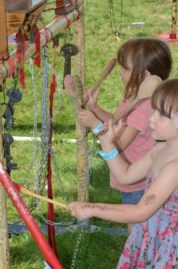 As it was the festival’s 5th birthday they held a birthday party with a giant pass-the-parcel, and a disco for the children. This created the only sour note I heard about the increased number of children this year – one of the 20-somethings asking why they couldn’t sit down to play pass-the-parcel. I believe they had a point – festivals should be about total inclusivity and should allow adults to join in with all the activities, so although I realise that it was difficult to make a pass-the-parcel big enough for everyone, everyone should have been included. 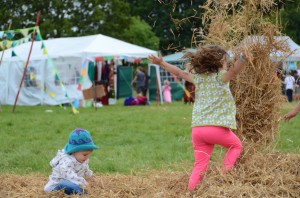 Where did the weekend go? We were lucky that the sun shone and it was a lovely hot weekend. The festival was so small and friendly that we made so many friends just by hanging out and chatting. We wandered in the woods and looked for toadstools. Children ran around throwing water at each other and at the stewards who laughed and threw some back. Our eldest Eloise, aged 7, made some friends and went off with them – we hardly saw her the whole weekend. One of the hay bales broke and the children spent a happy hour throwing hay in the air and rolling around in it. The fire in the centre of the festival even had ready-made marshmallow toasting sticks. The festival children all took turns taking our festival wagon up and down the field with random children in it while we sat around and wondered how it was possible to be so relaxed at a festival. It reminded me of something out of a children’s book – slow summer days with happy outdoor children discovering the joys of being outside. 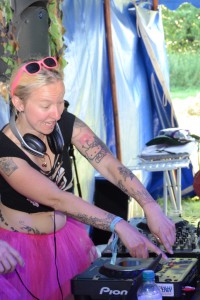 Due to popular demand, they decided to turn the volume up this year, and the main stage had some excellent DJs until the early hours. I was up very late one night dancing to electro swing and then some great techno. You could hear the music from the campsite this year, but of course it was nothing like the larger festivals – still good to take earplugs if you’re a light sleeper!

Even though you can now stay up all night there, there was plenty to dance to during the day. I’m partial to a bit of dance music so I loved the DJ tent. There were children’s activities going on just outside, with a dress up box (that the adults could also dip into) and then inside some brilliant DJs playing tunes to a happy crowd. At one point they put on one of my favourite tunes, Camisra’s ‘Let Me Show You’, and everyone was suddenly on the dancefloor whooping and cheering along to all the breaks like old friends at a house party.

My favourite moment (as a former indie kid) was dancing to the Cardigan Pimps, who play 90s covers. It was so much fun jumping around to Blur and Pulp songs. One of the dance teachers started doing the Charleston shuffle to Deee-lite’s ‘Groove is in the Heart’ and we all joined in – a sort of Charleston flashmob.

There was a fire show at midnight, and then cabaret later in the DJ tent – unfortunately I never made it out that late but I heard it was fun! It would have been good to have a fire show earlier in the evening for the children.

Chilled in a Field has always had just one little café serving home cooked food all day. This year they added children’s options such as fish finger butties, and they also served half portions of the main food. The food was, quite frankly, lovely, and very reasonably priced (children’s meals £3). We all ate the roast lunch on the Sunday which was gorgeous.

This year they added the Twisted Chip van (a whole potato cut in a spiral and fried, which the children loved although was a little expensive at £3 each), pizza (£5-6), and a pancake van. Pizza is always welcome for us but the children refused to eat it as the sauce had so much garlic in it which was a shame. 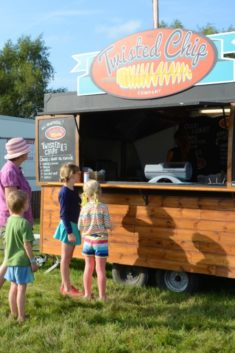 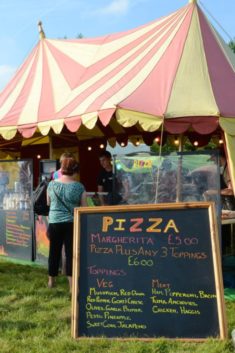 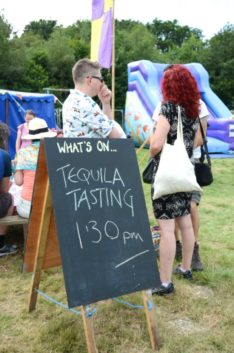 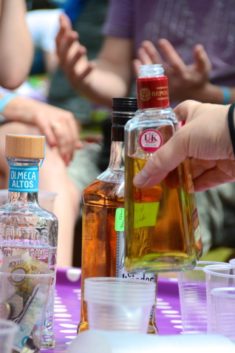 I don’t normally separate out the drink from the food in reviews – but I love the bar at Chilled so much I had to! There are just so many beers and ciders to try – if you love your real ale then this really is the festival for you. Just get in quick if there’s something you want to try! There was an espresso stout with coffee in it – that sold out after two days! I’m a cider girl, and as well as all the usual medium, sweet, perry etc they also had the following flavoured cider: raspberry, orange, lemon, ginger and beetroot!

The barmen were great fun and I admit I spent a lot of the festival standing at the bar chatting to random people and trying different beers and ciders (all around £3.50) off the list (they were always happy to let you try a bit of everything!) My favourite was the lemon cider, but I couldn’t quite get my head around the taste of the beetroot one – tasted a bit like cold borsht – not for everyone that one!

They held both a whisky and a tequila tasting over the weekend – as they were at lunchtime I decided against joining in with this – but it was a still a friendly place to sit around and chat with new people. Next time a beer and cider tasting would be a fantastic addition for the parents.

Next to the large bar they had a tiny bar at child’s height where they served little cups of juices and water – my children quickly learned to go there when they were thirsty!

I’ve already bored everyone I know telling them about Chilled in a Field, so I’m going to stop now. If you’ve read my 2013 and 2012 reviews you’ll know how much I’ve always loved this tiny festival and there’s so much to love about it (and judging by how quickly the 2015 early bird tickets sold out it’s not just me).

A quick message to the organisers – please don’t make it much bigger! It’s such a perfect size and atmosphere as it is.

My advice – buy your tickets for next year now, before they sell out!