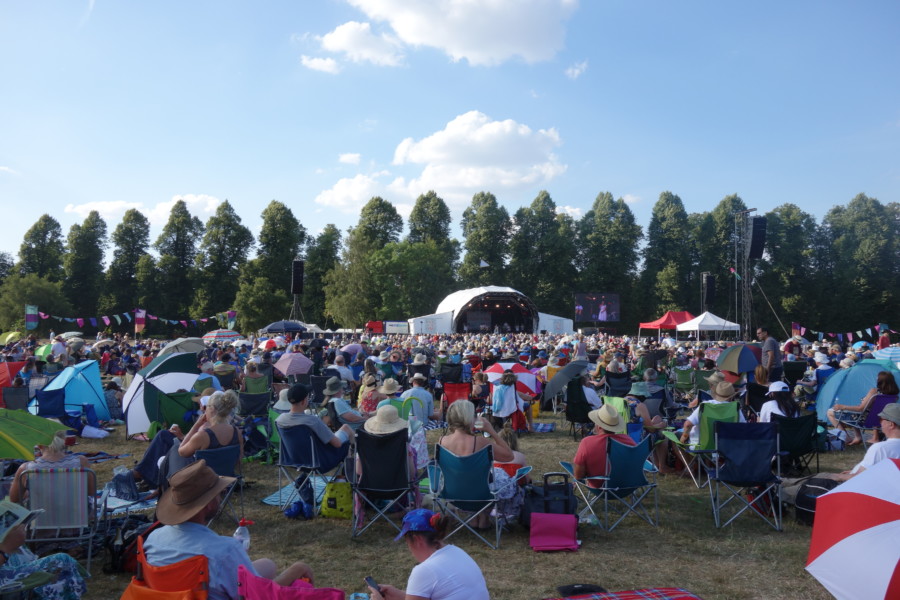 There were two things I knew about Folk By The Oak Festival before going there. 1) was that it had won the FestivalKidz award for best day festival in 2017 and 2) that it had a designated Gazebo section. I decided in the end not to bring my gazebo to the festival, instead throwing in a small blue castle at the last minute to provide some shade.

With this year’s weather the gazebos were definitely being looked at enviously by festival goers sitting in their camping chairs holding a golf umbrella as a parasol, as the unexpected sun caused queues at the water points.

Even if you haven’t brought your gazebo the general theme for this one-day festival seems to be come in a group, set up camp for the day andtake it in turns to head to the kids’ area, down to the front for a boogie etc. 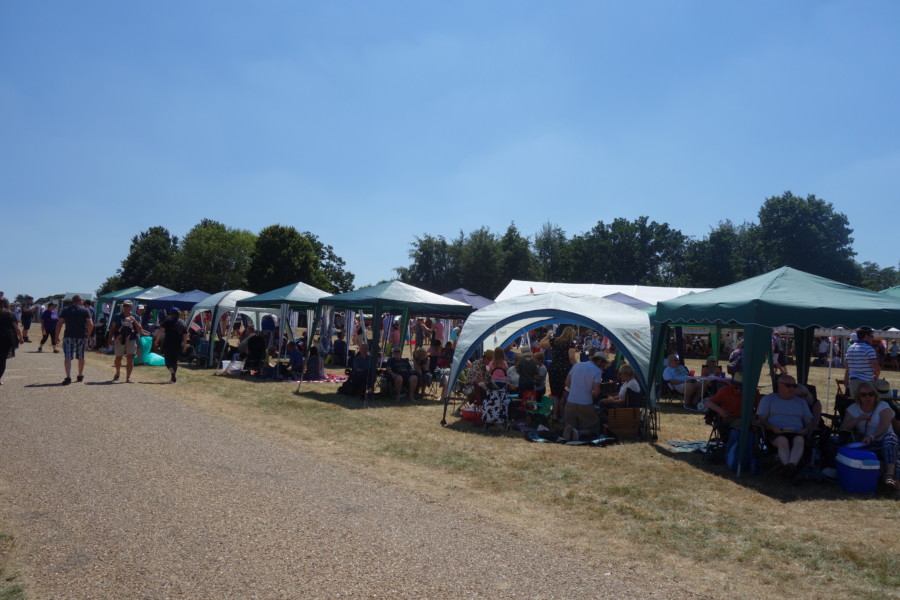 Many people pack up before the final band and so there is plenty of room to move forward for the headliner at the end of the evening. There’s no real advantage to set up a camp however if you travel light, as you can see the stage from everywhere on site.

So, on such a hot day there was a lot to be said for sitting in the shade of an oak by the kids’ area, walking up to the stage for the musician you like and then after 20 minutes in the sun heading to the acorn stage for a sit down on one of their shaded straw bales.

Folk By The Oak currently seems to be a local event for local people. The raffle ticket sellers (The festival supports Willow; a charity which provides special days for seriously ill young adults) were stunned to find that I had come all the way from west London to erm, just north of London, but once you come once it becomes a permanent fixture on your calendar. For good reason too…

Unsurprisingly; Folk. A fabulous line up of folk royalty, with many bands being invited back year after year as they work their way up the listings from Acorn Stage to Main Stage. Some bands were small enough to come out and sign albums after their set whilst names like Billy Bragg, Eliza Carthy and Amy MacDonald ensures you are in no doubt as to what league this festival is operating in.

Folk By The Oak take care to schedule their acts so that no one (Acorn Stage, storytelling, dancing exhibitions) is competing with the main stage. This means that you have the quite lovely experience of hearing a haunting melody as clear as anything whilst you help your child attempt to balance on stilts.

Children were issued with wristbands with parents phone numbers upon entry and there were an awful lot of families there. That said – the children’s area never felt crowded. Whether you were sitting watching the puppet show, making a mandala, waiting your turn for the slacklining or testing your circus skills there was always space to do what you wanted pretty much immediately.

The only place where there was a little bit of competition was for the spaces in the shade at the fantastic storyteller, but with a show after each mainstage act you had plenty of opportunities (or you could just go to all of them as several children did!)

There was a suggested donation of a few pounds for the making activities and the rock climbing so do bring some cash if you’d like to take a fairy door home with you.

There were also kid friendly activities dotted throughout the site. You could do some knitting in the craft tent, have a go at folk dancing or chase the bubble man around. Plus – being a family focussed folk festival it never got too rough down the front and so it’s a great opportunity for kids to see bands up close without too much effort. 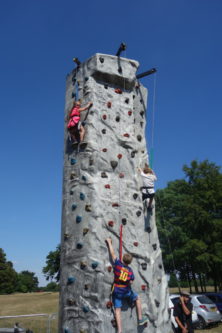 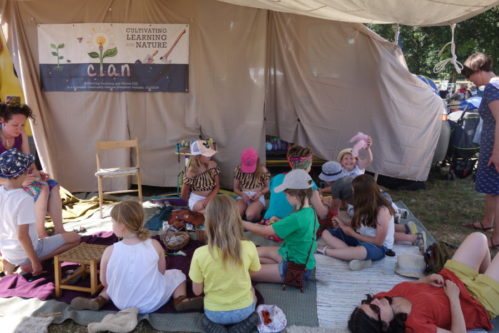 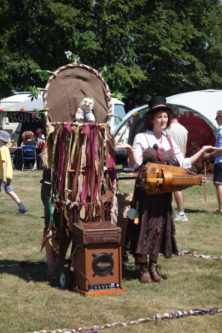 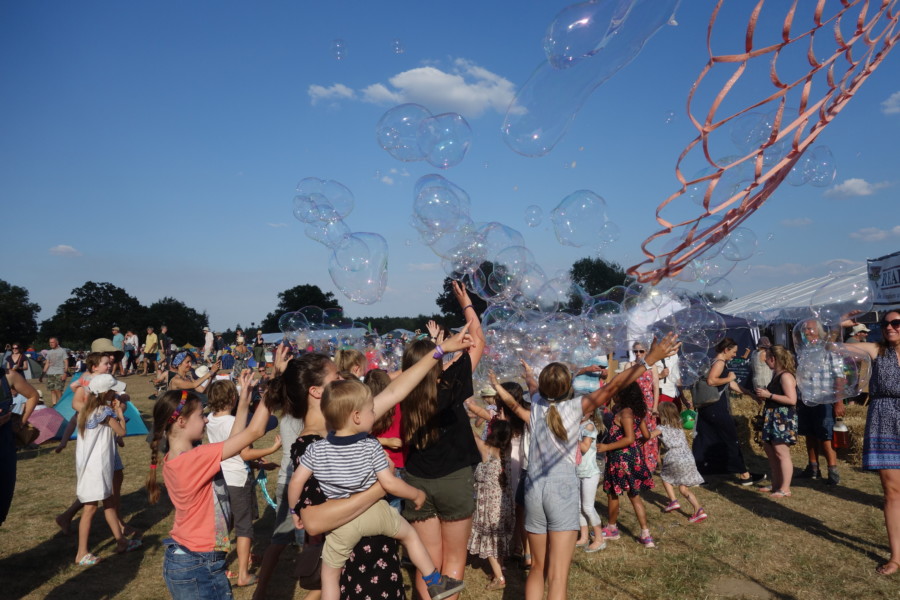 Folk By The Oak actively encourages people to take picnics (including bringing your own alcohol onto site). This is an idea that is wholeheartedly embraced by most festival goers including myself as I brought out the sausage rolls and frozen fromage frais tubes.

Regardless there was a variety of options available for purchase including hog roast, fish and chips, farm shop/local produce, crepes, souvalaki and several vegan options. Food was around the £7 mark for a meal and the longest queue by far was for the two ice cream vans.

In an attempt to cut down on waste plastic Folk By The Oak were not using single use bottles of water backstage, instead supplying all of the acts with refillable insulated bottles. These stylish bottles could be bought at the merchandise stands and guests were encouraged to use the water points instead of buying bottled water.

There were many jokes from musicians about how long the bottles took to open mid-set but still I hope it is an initiative that will be copied elsewhere. If you fancied something a little harder real ale and cocktails were readily available.

Your standard portable toilets were located at the back of the site. There were signs inside suggesting that you held the door for the next lady but due to the size of the festival we never ever had anything approaching a queue even straight after a main stage act.

To the right of the semi circle there were some larger accessible portable toilets. Only one area was marked as being for people with disabilities and so we used the other one as a family toilet. There was plenty of room to take two little ones in and it was as impeccably clean and well stocked with loo roll as all the other toilets.

Parking was in one of two fields right next to the site. In this hot dry summer there were absolutely no worries there. Grass was mown, vehicles were well directed and evenly spaced and there was no problem getting out.

Having heard that it may take some time to get out after the fireworks we left just before the end of the headline act and were able to drive straight out. However our friends who stayed till the end said they had no troubles getting out promptly this year, so it looks like this is one area that the Folk By The Oak team have really been working on. 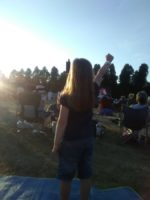 To sum up this is a lovely laid back one day festival – the perfect introduction to festival life. If you’ve never taken your kids to a festival before, the polite nature of Folk By The Oak is sure to leave you eager for more.

If you are a seasoned festival goer then it has all the right ingredients to keep you going between camping trips. I left it wishing I was going back to a tent as opposed to back to work the next day but it has definitely got my vote for this years FestivalKidz Awards!

See our factsheet for more information on Folk by the Oak.