It was with some trepidation that we packed what seemed like our entire house into the car, to set out for our first ever overnight festival, Chilled in a Field 2012, with all three children.

We had already taken our eldest to festivals before the twins were born, but this was an entirely different and some might say more insane affair.

A five year old and two year old twins? Were we mad? Maybe a little but we love our festivals so much we had to try!

It took us a total of five hours to pack and leave the house (including meals, nappy changes and argument resolutions) but finally we were on the road. Luckily the festival we were heading for was only an hour and half drive out of London – we were going to Chilled in a Field, located in a farm near Etchingham in Kent.

The drive was uneventful and soon we were parking up on the field. The first trial of our festival was how to get our stuff down to the site. When the promise of a trolley failed to materialise we decided we’d take the tent down first and transport everything else a bit at a time. We did have a small foldable wheelbarrow but even with this it took the best part of the day so we decided that next time we would need to bring our own trolley. On the way out the organisers kindly let people drive their cars down the hill so thankfully we didn’t need to transport it all back up again.

The campsite was separated into three areas, the ‘glamping’ site which was full of very lovely looking bell tents, the ‘quiet in the evening’ campsite for families and the ‘quiet in the morning’ site for those looking to party all night. One of the organisers (they were an extremely friendly and helpful bunch) showed us where might be best to camp and told us where the toilets and water was. There was also a table for washing up with some cooking equipment for communal use, communal BBQs available for anyone to use, and a solar powered shower. What we didn’t realise at the time was that there was only one water tap and the toilets near it were the only ones on site, so if we returned to the festival we would make sure we were camped much closer to them.

The toilets were our second obstacle of the weekend. Although I thought they were some of the cleanest ones I’d experienced, my five year old would go nowhere near them. They were composting ‘drop’ type loos and although they looked lovely, they smelt very bad. Luckily we had packed the obligatory ‘bucket with a lid’ to be used at night times and she ended up using that the entire festival. Which was fine as our tent was such a short walk from everything.

The festival was extremely small, only 500 people in total, so everything was a short walk. It also meant that you kept bumping into the same people and so it had a very friendly vibe. There was loads of room to camp, loads of room for the children to run around, and virtually no chance of losing them. Having experienced both small and large festivals I can say that with young children small is definitely best. I spoke to other families who just let their children go off for most of the day, and it was small enough to be completely safe to do this.

There was one cafe selling healthy tasty looking food throughout the day. Although the food looked great we were on a budget and my kids are quite fussy so we ended up mainly cooking for ourselves and were thankful for our stove. If our children were older we might have eaten there more – they served up homemade and healthy food such as spaghetti bolognese, curries, full English breakfasts and even a roast on Sunday lunch with all the trimmings. The bar in the dance tent served a wide range of local beers and ciders, including blackcurrant mead.

The organisers, Planet Angel, have been running some of the best club nights in London for some time now and so it was no surprise that the music was exceptional. There was a tiny dance tent with a bar and excellent DJs but also two other small stages with some fantastic live music. This being a tiny festival there were no bands I’d heard of but I don’t go to festivals for big names, just for the atmosphere, and the quality of the music here was high. Some stand outs for me were the Cardigan Pimps (a 90s Indie cover band which got the whole tent up and dancing including my three little ones), Robyn Keen (a very young girl with a beautiful voice singing breathy ballads), and Tribe of Tinkers (a fun folk music band).

Added to the three tents with music, there was also The Dell (a decorated area in the woods) and a maze with a pirate ship in the middle which were both brilliant for my five year old to explore. They had several different craft workshops – we attended the cake decorating, make your own playdough, make your own musical instrument and make your own pinhole camera. The last one was especially exciting for my five year old and she spent the rest of the day taking photos with it – whether they come out or not is another matter!

My only criticism (and it’s a very small one) was that there wasn’t quite enough for the younger children so our two year olds couldn’t participate. Although there was a sandpit, two little trampolines and some hula hoops for them to play with, there wasn’t as much for the under-fives as other festivals we’ve been to and this didn’t keep them entertained for long enough.

Some of the other festival madness that we saw was the glitter wrestling (semi naked people covered in baby oil in a paddling pool full of glitter!) and the wheel of genres which was great fun (you spin the wheel and the DJ has to play the next track of that genre). I’m not sure if there was any official costume parade but everyone (including my three children) seemed to spend the majority of the festival in fancy dress. The twins as usual gained a large amount of appreciation, looking very sweet in their fairy dresses which they insisted on wearing the whole time, so I was very glad I’d packed them all 2 outfits each!

The highlight of the festival for us was in the evening when they lit a massive bonfire and encouraged people to bring out their glowing poi and rings, so the whole field transformed into a magic world of light. One of the children had brought a bag of marshmallows and suddenly every child on site was running off to fetch sticks from the woods and roasting them into stickiness over the flames.

With sadness we packed up our tent to leave on Sunday morning. Although I have to admit that by that point I was looking forward to a shower and a real toilet. The last trial of the festival was discovering that one of our naughty toddlers had climbed into the front of the car and turned the lights on while we had been unpacking it. So my husband went to find someone with jump leads. The staff were again wonderfully helpful – apparently the problem wasn’t finding the jump leads, it was finding someone sober enough to drive their Landrover up to the car park!

I settled into the last part of the festival with a local cider. As the sun shone they put on a trance classic, so I leapt onto the small dance floor for a quick last jump around and the handful of people dancing grinned and waved at me. The weekend had been an experience – it had been hard work and we hadn’t slept much – but the sun had shone and all the smiley friendly people had made it one of the best festival experiences we’d had yet. I was sure we would all be back here soon. 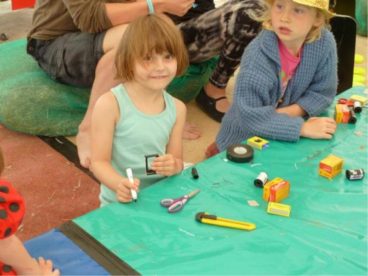 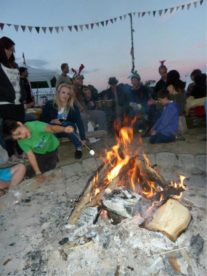 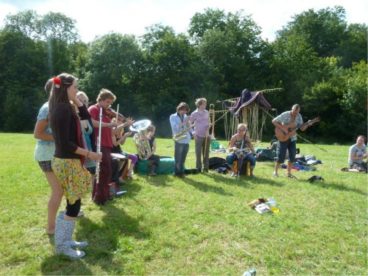 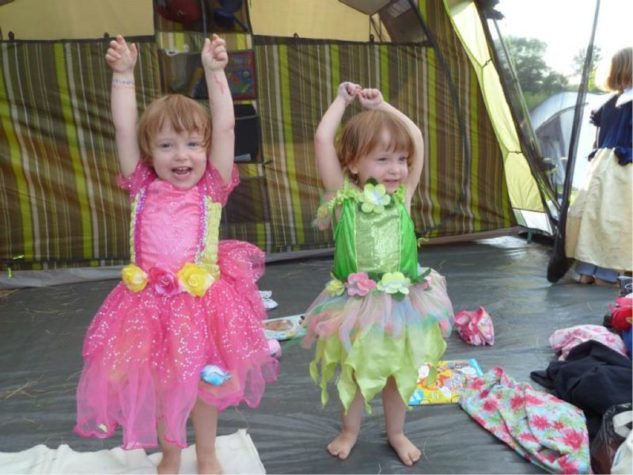 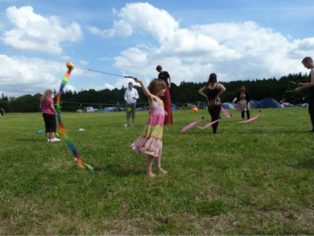 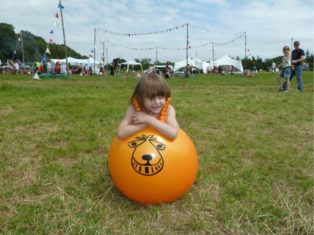 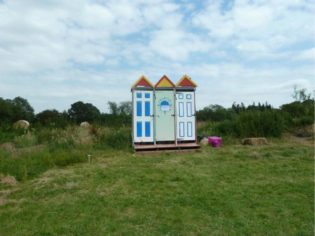 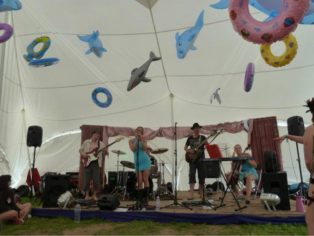 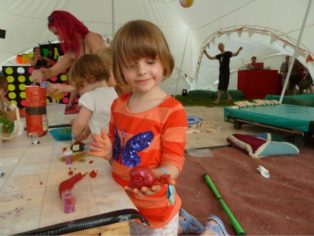 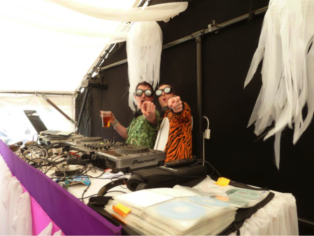 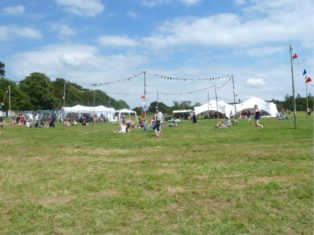 The field to chill in… 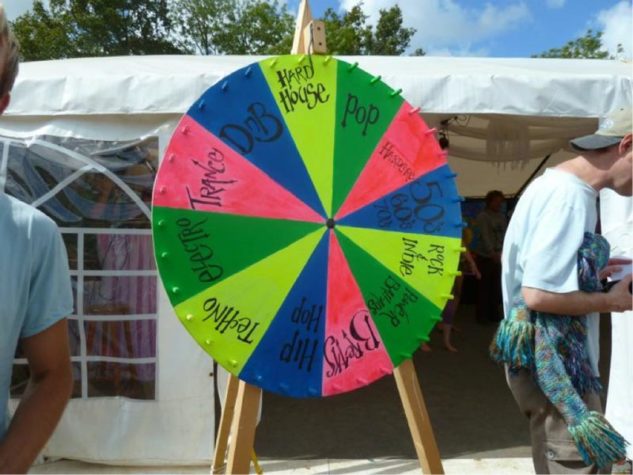 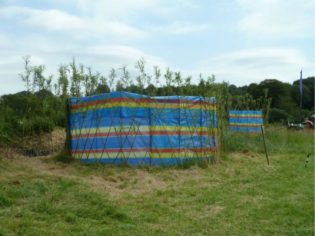 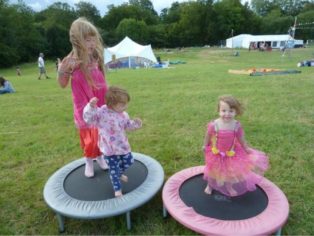 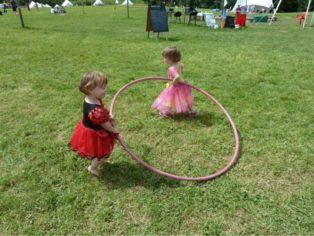 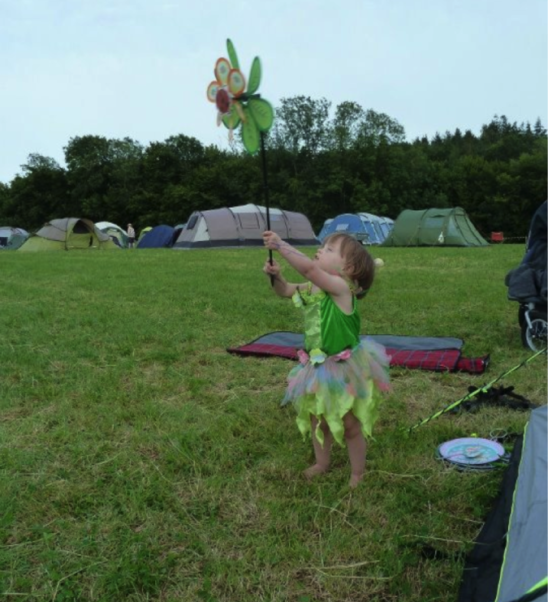 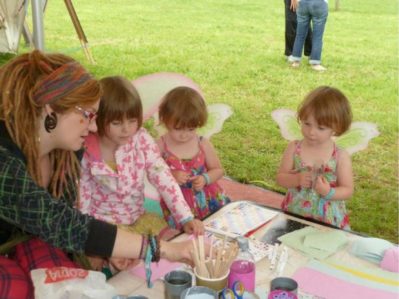 Make Your Own Instrument Workshop 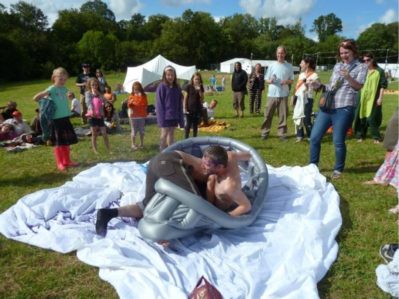 For more information view our Factsheet or visit their website at www.chilledinafieldfestival.co.uk