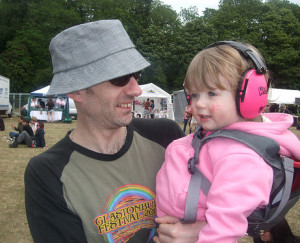 Set in the grounds of New Eccles Hall School, in Quidenham, Norfolk, Playfest is in a beautiful setting, lots of trees and little coves of trees.

We knew where we were going as we live about 20 minutes up the road, and it was well signposted off the A11.

Upon entering the carpark (an empty goose farm field) we were told to park to our right and then the steward muttered something else, as I drove off another steward shouted at me “put your hazards on” in quite an aggressive manner!  That must have been what the other steward had said that I didn’t hear. (I noticed the car in front didn’t have hazards on nor did a few other cars that came in, she didn’t shout at them!)

It was quite a short walk to the gates from the carpark, but it took us longer as we were in a party with two toddlers walking and two pushchairs piled up with stuff.  We went and got our wristbands and then walked through the woods to the festival entrance.

At the “search point” we weren’t quite sure what was happening or what we were meant to be doing as revelers were just standing around the stewards not doing much at all. We soon realised (after overhearing) that men had to go in one side and women on the other. Our pushchairs were searched and I was asked if my peach sparkling water was alcohol!

In the main field (the school’s playing field as you could see last years running track etched in the grass) we wandered around until we found a spot to settle.  In this area there was the main stage and a tented stage, a few fairground rides, a few food stall, a tattooist (?!), a tea tent, a bar and a few ice cream vans.  There were two stalls selling sweets and crafts.  I looked around and noticed NO GREEN CHAIRS! it was like Reading used to be, I thought ‘how middle classed are we going to look when we put our chairs up?!’… so we didn’t… then when we saw someone else with chairs we put ours up!

The site was very well laid out, off the main field there was a dance arena which consisted of a tent, a weird inflatable ball thing that looked like it was off the crystal maze, a cocktail bar called “Barlesque” with an inflatable mini dance tent and weird inflatable flowers that you could throw yourself on. This was a fun and funky area in the day and the children were very well received in the dance areas. One chap said to me “Is that your daughter? She’s amazing man…” I have to admit she looked rather cute in her pink Regatta fleece suit, pink ear defenders and glittery wellies. At night it became a different place, my friend and I went back for a rave and the atmosphere and smells were slightly hostile.

We took a while to find the acoustic stage though which was on the way out towards the campsite, this consisted of a radio caravan like you see at the Royal Norfolk Show and one of those silver American trailers. It was very basic, but when we were there a very upbeat folky type band was playing and all the people enjoying the band seemed to be having a great time and there was a lovely atmosphere, however it seemed to close really early. I’m not sure why this was but it seemed a shame that it didn’t continue later on in the night for those who fancied something a little bit more mellow.

I think for a first year the Norwich Rock boys have done a great job on this little festival but here are a few points which I feel I have to make.

1. The food – It was awful, really bad. On their website PlayFest say the following:

Sorry due to restrictions of the fire and safety regulations at Play Fest, cooking with naked flames or BBQ’s is not allowed. Due to this we have made a concerted effort to keep food prices low.

OK fair enough, I get this, but if you are going to impose this rule then you MUST provide a range of hot food at reasonable prices. A poor quality beefburger for a fiver is not a reasonable price. I would be happy to pay this if the burger was a better quality and salad was provided.

A vast selection of delicious freshly cooked food lovingly prepared by an array of accomplished restaurant chefs to suit all tastes.

The food stall was terribly disorganised and they seemed to be running out of food all the time. My husband went to get me a jacket potato and was told there was a 5 minute wait, then he was told there was a half hour wait!  My friend’s husband then went to get her a veggie burger (because they had run out of jacket potatoes) and came back with a burger in a plain bun because they had run out of cheese, onions and ketchup!

Everytime we went to get food there was a very long wait and each time they had either run out of something or they had their timings badly wrong. For what appeared to be a professional setup they were awful.  Had I been camping I would have been very upset at this, if I am not allowed to cook myself some food I at least want some decent grub at a decent price.

2. Tokens for food and beer – The food stall and the main bar required that you bought tokens before purchasing anything. Now I have always hated this practice and it was one of the many things I hated about V festival.  The most laughable thing was the fact you purchased the tickets at the same stall you bought the food or drink from. Why not have a separate stall that does this to save the queuing? Still I can’t see the point so if any of the organisers would like to explain this then I would be interested to hear, especially when the bar in dance arena accepted cash!

3. Toilets – I counted a total of 12 portable loos in the main arena and none anywhere else! Admittedly there weren’t many queues but there was in no way enough and they had no lights in them! There was one urinal portable loo on one side and an accessible toilet on the other side of the site, however they could have done with more urinals and an extra accessible toilet.

4. Children – On the website it is mentioned that children under 12 are admitted free of charge and on the map there is a dedicated family campsite, why not in this case provide something for children? A few dodgems and fairground games maybe OK for over-5s but what about something for the under-5s?  A craft tent would be easy to set up and very popular. The Applyard fayre, albeit it a much smaller event has a craft tent and my brother’s children had hours of fun in there.  So PlayFest may not be pitching itself as a child-friendly festival, but if you provide family camping then it suggests to me that you need to provide some facilities for children.  My friend and I said we would quite happily volunteer for this job next year!

To be fair, it was the first year, and I did enjoy it and it was a good dry run for us with our little one.  She loved charging around with her ear defenders on and kept running in and out of the dance tent and as I mentioned earlier, people thought she was lovely and were dancing with her in the tents, never did anyone give us disapproving looks for taking our little ones in the dance tent (my friend and I are both former ravers so loved this!) and we got lots of “Aren’t they cute?” comments. This made it a totally different experience for all of us as we are all seasoned festival-goers and it was our first experience with children.

The question is would I go back?

It was well priced for tickets and very local, I would not camp though due to the food issue and would take a huge picnic in with me each day. I do hope though that the organisers ask for feedback and act on it because I think with a bit of extra thought PlayFest could be totally amazing   WILL be totally amazing in time.