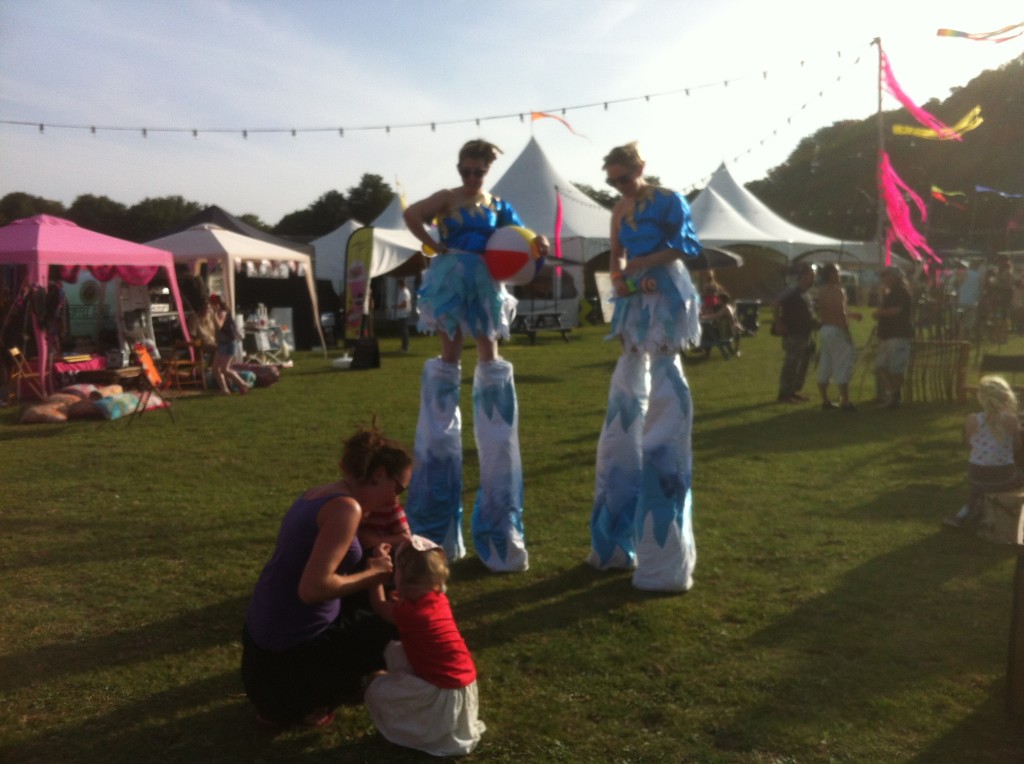 Big Fun at a Little Festival

Summer Breeze is probably the smallest festival we have been to but still had a big festival vibe. We arrived on the Friday evening and after a picnic in the sun we had a look at what the festival had to offer. Despite it being very small there were still two stages, food stalls, a bar, clothing and festival accessories stalls. They decked the festival out with colourful flags, plenty of pink netting and painted bins. The highlight for us was perhaps the ET Games stall where we got to play the games for free and even compete against ‘the master of pucket’ himself….we lost! They were such simple wooden games but seemed to capture the imagination of all ages and even better that he uses prison inmates and Fair Trade Co-operatives to make them.

Whilst Friday was quite intimate, Saturday saw an extended site with the main stage being pushed back which also revealed the kids area. This was perfect for us to enjoy the music whilst Hazel and Gwilym got to play and be crafty. The storms on the Friday night and into Saturday didn’t spoil the atmosphere nor indeed the ground which meant a mud free festival. There was a short pause in proceedings during Saturday’s set whilst we waited for the Thunder, lightning, rain and hail to pass over but this didn’t stop anyone enjoying themselves out in the weather.

Sleeping under the stars

As we were driving to the festival we were slightly concerned that the parking was on the other side of the road to the actual festival site but with safety in mind they had installed a pedestrian crossing which some very friendly marshalls were manning.

The campsite was a short walk across the road and along a track from the carpark and was quite a small area but on the plus side there was no distance at all to walk into the festival site. There was usually a small queue for the loos but they were well stocked with paper and generally pretty clean as were the ones in the main ‘arena’. The live in vehicles were on the opposite side of the festival and seemed to have a good amount of space.

They describe Friday night as party night and after tents were pitched the party began to get going helped along by the southern sounds of Dr Bluegrass and the Ill Billy 8. Their rendition of Jungle Book’s ‘I wanna be like you’ went down well with our kids, however it was their version of The Proclaimers ‘Fivehundred miles’ that got them really excited. Saturday provided a wealth of different bands which were unknown to us. Whilst the children were happily engrossed in making guitars we watched George Montague playing a real one and trying his hardest to get the crowd going. We also appreciated the atmospheric sounds of The Hat Club which had a hint of PJ Harvey. My enjoyment of this moment was slightly comprised by being irritated by thrips but I don’t think we can blame the organisers of Summer Breeze for that! On the tent stage we stumbled across Corky, a local guy who describes the genre of his music as Wurzelrapfolkpop! He definitely kept us entertained. 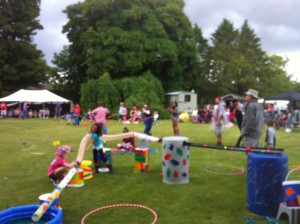 Junkfish provided the kids entertainment and it was perfectly situated next to the main stage so we could enjoy the music whilst keeping an eye on the fun they were having. The range of activities was brilliant for the size festival and they did well to cater for babies upwards. There were younger toys and books, mask making, guitar making, head dresses and juggling balls to make and we even saw teenagers joining in with some of the crafts. There was a big array of circus equipment, a giant marble run and pots and pans to ‘play’ which again kept everyone from 6months to 60 years and above happy! The people running JunkFish were great and our, sometimes shy, daughter felt quite confident going off on her own to make a guitar. She enjoyed it so much that she took her little brother back to help him make one too.

There were only a limited number of stalls serving food but very good value ranging between £2 and £6. They were also more than happy to split a portion between two plates for the kids. We were a bit disappointed that the noodles had run out by 5.00 on the Saturday, however the kids enjoyed their hot dog (£4.50) and we tucked into a hog roast bap (£5.00). The bar had a brilliant selection of local beers and ciders and at only £3.50 a pint it would rude not to indulge in a couple. The home-brewed chai tea (£1.50) was delicious and served by some lovely ladies who would have let me off paying as they didn’t have any change to give me, I dug around in my bag and luckily found the right amount for them.

Other bits and bobs

There were plenty of bins dotted around the site but unfortunately just for general waste and none for recycling. They did, however provide free ashtrays for those who smoke so that butts weren’t left around.

We got chatting to some people who use wheelchairs and they found the site easy to negotiate despite there not being any specific adjustments. There were grateful for being allowed next to the ‘arena’ though.

Overall Summer Breeze was a very unpretentious, family friendly festival and for the money was well worth a visit. Oh, and don’t let the fact that it is just outside Swindon put you off!

For more information on Summer Breeze see our Festival Factsheet.