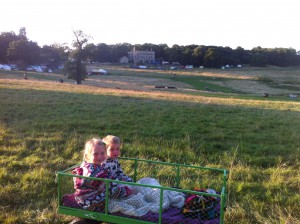 I don’t think we have ever been to a festival that is as welcoming and warm as it is at this one. The organisers have tried to make a community feel to the gathering and this was certainly in evidence.

Although I wouldn’t like to start off on a negative note that’s the situation we were plunged into on Thursday afternoon trying to get into the festival. It’s a bit of an odd set up when you arrive; you wait in your vehicle in a ‘holding area’ before moving onto to the box office area to drop all your kit off and collect your wrist bands before parking up again. Since we have a trolley we decided to plod over from the car park with all our kit before queuing for our bands. Unfortunately that queue was quite substantial, we overheard one little boy ask his mum ‘Is the Green Gathering one big queue?’ but after quite some time got our treasured bands… We could finally join the world of magic and adventure up the long track beyond. We got split up at one point but with help from the loveliest stewards, info tent and the guys from Assisted Camping we eventually got reunited – just one of many examples of the genuine friendliness of the Green Gathering.

Once we were set up it was possible to begin to appreciate the true beauty of the site with a wealth of activities, performances and activism on show and we were really happy to delve into the action. We didn’t go too far on the first night but it was wonderful to watch the fire near the Raconteurs tent and then sup an excellent pint of cider for only £3.50 (more of food and drink later). By the time Three Daft Monkeys had come on the kids were fast asleep in their portable bed which left us to enjoy the music! It is an amazing setting with the ruins of the grade II listed building (Piercefield House) as a backdrop. That night we slept like logs looking forward to a full smorgasbord of frolics and fairy glades to discover!

The Green Gathering is not just a music festival and when I have told people this they say ‘oh what is there then?’ Well who needs music when you have such a wealth of crafts ranging from basketry, making a clay oven or pocket rocket stove, blacksmithing or making a bag out of fish skin to name a few. We were blown away by what was on offer and felt we could have stayed all weekend in this area alone learning new skills from people who love to pass on their knowledge. All the activities were very reasonably priced covering just the material cost or in some cases just a donation was asked for.

For kids there was the opportunity to make flower head garlands, copper jewellery sea glass tea lights or seed balls either in the Kids Craft area or with Forest Schools in Permaculture. Our two decided that making a fabric bag, dream catcher and ‘magic’ wand was for them and it was lovely to see not only theirs but other little faces beaming over what they had made.

Before coming to GG we felt a bit nervous that, despite making every effort to lead sustainable lives, we wouldn’t be radical enough to fit in. How wrong we were! At no point did it feel like people were looking down their noses at anyone else instead were there to offer information, raise debate or skill share. There were some very informative and inspiring speakers, films and tents highlighting issues from Fracking to Palestine or working co-operatives to living off-grid. There is a whole area dedicated to campaigns but if it all gets a bit heavy for the kids there is a lovely, peaceful little garden in the middle of the area to unwind in.

Despite Green Gathering being so much more than just music they do manage to do music and entertainment very well. We stumbled across Rory Mcleod, whilst waiting for the Three Daft Monkeys, and enjoyed his unique way of intertwining his songs with chats in-between. There was some laid back hip hop from the High Breed and the eclectic sounds of Pikey Beatz. We enjoyed numerous impromptu bands playing on the side of the road and the humorous songs and poems from John Hegley.

There are also several open mic sessions including Radical Wales and this improvised, organic mood infiltrates the whole site. Whilst walking around you could always hear something of interest whether a drumming circle, a ukulele workshop or just the sounds of very happy people. The atmosphere was so contagious that even our sometimes shy Hazel took herself and younger brother off to listen to some folk music in the ‘Floating Lotus’. They also joined in with the Skantics presenting ska aerobics (and yes there is plenty of skanking going on whilst doing your grapevine), there was lots of ska music, lots of smiles and lots of calories being burned!

With the Majical Youth Theatre running the kids area there is always going to be loads going on, but where to begin!? There was something for all ages from learning to DJ in the Youth Tent (for older teenagers and young adults) to creating a samba band in the teens tent (for younger teens) to the kids craft tent and theatre tent to the toddler tent. Outside there was a constant stream of activity throughout the day with circus skills a plenty. Hazel’s favourite was the parachute games with the most enormous parachute and Gwilym just couldn’t get enough of the giant bubbles. It was great to watch the scrum of kids trying to get the glistening orbs.

There was also the opportunity to participate in the ongoing Pallet Palace challenge where kids spent hours creating a massive structure to the tune of their hammering and sawing. Other popular activities (especially with our two) was the tight rope walking and the hand cranked merry-go-round. One thing that captured all our imaginations was the little cabin of curios full of natural and fantastical displays including insect fairies and mechanical birds. The children were fascinated by this and even got to make their own mini museum in a matchbox. 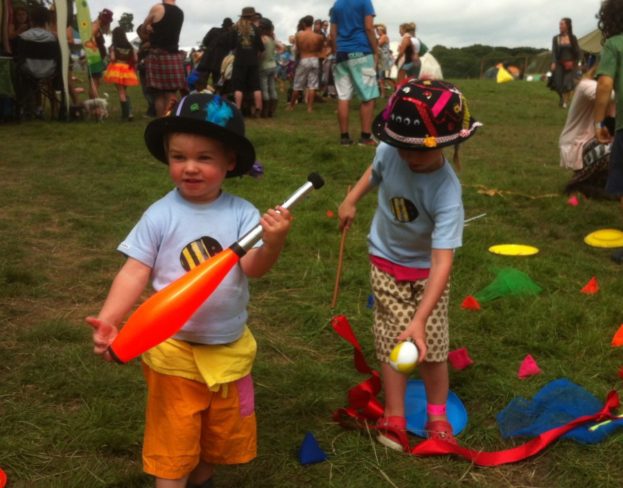 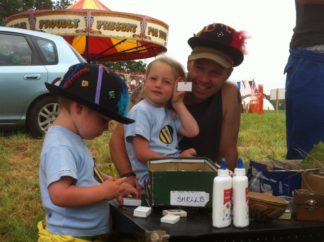 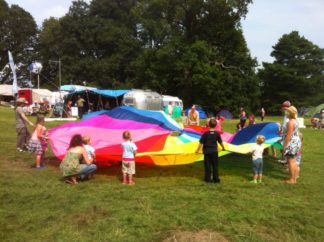 Food and drink and other stalls

Refreshingly there is a lack of any corporate or large commercial operations. Emphasis is placed on local and seasonal, organic and vegetarian/vegan fayre and unlike other festivals the food is very reasonably priced. Most meals cost about £5 (including the most delicious spicy vegetable stirfry we had for lunch one day) but we even managed to get a massive savoury pancake for the kids (£3.50). It was easily big enough to split between them for lunch followed by a cone of Churros (£3.50) for pudding. Chai was a popular festival drink as was the brilliant array of beers and ciders (at only £3.50 a pint). When you buy your first pint you give a £1 returnable deposit for a sturdy plastic pint cup which you use throughout the festival, cutting out the need for all those flimsy throw away cups. We were also surprised to see a bread stall selling a superb range of breads and cakes in the mornings which we gratefully sampled and at just £2.00 a loaf it was another example of the Green Gathering being excellent value for money.

All the stalls seemed to be great value, so much so that we bought a few little Christmas presents. The lovely hand axe I purchased for myself from the friendly Tools for Self-Reliance (a charity who refurbish tools to send out to Africa) was an excellent price and made my other spoon carving friends quite envious. 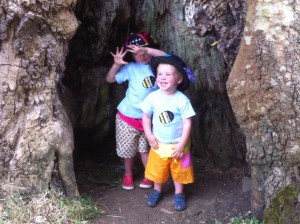 There is plenty of space to pitch up in family camping or for a really special location you could walk a bit to find a more secluded spot in amongst the trees. Despite the very heavy rain over the weekend the site didn’t turn into a quagmire. There were times the main track got a bit muddy but that just meant the kids could have even more fun by getting grubby!

It wouldn’t be worth talking about a festival if we didn’t mention the loos! Luckily the toilets, both of the portable variety or compost loos, were clean and with paper and hand gel in most of the time. There was a special set of toilets strictly for kids only in the kids area and for all the other blocks of loos there was also one which had wheel chair access. Toilets were plentiful with only a rare queue as were water points. 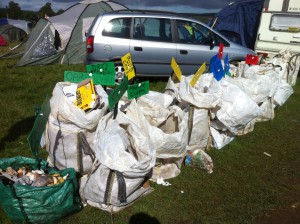 The recycling points were certainly not like the big rubbish bins you get at many music festivals. There were at least 14 sacks to divide your rubbish into and if it didn’t fit in any of them you had to take it home, sounded fair to us!

Not only do GG provide toilets with easy access they also provide a whole area called ‘assisted camping’. As part of this they have a bus service around the site which allows people with the need for some assistance to call a number and be picked up and taken elsewhere on the site, (a necessity for some people considering the size of the site). There are also induction loops in some areas. At the designated camping area you can have help pitching your tent, there are a specific toilets and washing areas, and access around the area is monitored to allow for mobility scooter/wheel chair access. The people running the area seemed to bend over backwards to help out and one lady even said she couldn’t have come on her own if it wasn’t for the assisted camping area and crew.

Despite the problems at the start of the weekend the Green Gathering is simply the best festival we have been to. Overlooking the River Severn with wooded areas and meadows and the wonderful array of tents, yurts, tipis and vans the site is stunning. The vibe is relaxed, friendly and not only fun but safe for kids. We were educated, we met fairies, we listed to good music, we smiled and we laughed, we roamed free and we joined everyone else doing the same thing, we joined the Green Gathering community for a special weekend.

5 thoughts on “The Green Gathering 2014 Review”