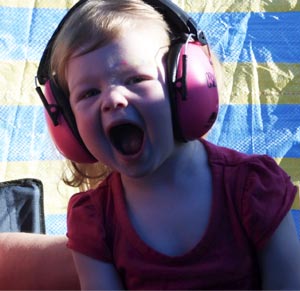 Review and pictures by Joanne Murphy

Willowman was carefully chosen as one of our festivals for 2013 based on its fantastic value for money (£50 per adult for 4 days and the 2 year old went free) location, line up, and last but most definitely not least… the kids’ activities on offer in Willow Wonderland.

We set off very excited and hopeful  we’d have a lovely balanced weekend with something for everyone.

We arrived Thursday afternoon (at no extra charge) and I quickly felt we’d chosen an absolute delight, we didn’t even have to leave the car at wristband exchange and within two minutes we were parked up and ready to pick a tent pitch.  The walk from car park to camping was 5 minutes at most, which I’m sure everyone who’s camped with kids will appreciate.  You could see the main arena/stage from certain spots in the camping area which gave it a really small, close knit feel, and the sun was shining on us too. 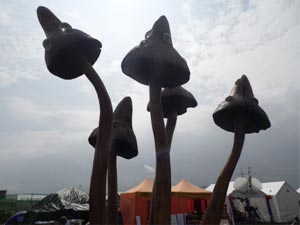 The stewards were exceptionally friendly, approachable and helpful from the very start, even assisting people with tents/gear which was great to see and added to the lovely warm and friendly vibe Willowman has.

Flags were out and kites were flying high, lots of kids charged around chasing bubbles and having fun and as their laughter filled the air the smell of BBQ’s filled the campsite.

We settled into our cosy sleeping bags that night smiling and content that we’d made a good choice so far.

The Willowman site was well laid out so you could have a good wander round, with lots of delightful stalls to mooch around selling some lovely handmade stuff (we brought home a rather charming little wire and bead grasshopper).

Catering was from locally sourced traders and we had the best shortcake biscuits from Thomas the Bakers, who had all sorts of other truly delicious stuff at very reasonable prices.  We also found a delicious noodle van which was fantastic (the food not the van!), there was also a steam train converted into a fired pizza oven and hand spun candyfloss from a traditional Silvercross pram!

One of the highlights of our weekend was to see The World Walkers, they were simply amazing and we hope they will be there in future years, I was so amazed when they came out into the crowd that I didn’t even think to take some photos.  We didn’t get to see the big fairy but I have seen some pictures and she looked fantastic, and the kids were mesmerised by her from what I heard. 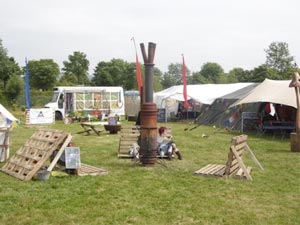 Willowman had a truly great selection of music on offer at the main stage, Willow Wobbly Beer Tent and Creative Intentions chill out café… and trust me ‘chill out’ area sums it up perfectly!  We often wandered around there and sat for a while as it had a lovely peaceful vibe to it.

Just around the corner…….. The Orb, Space and The Wonderstuff were top of the bill in the main arena, it was great to wander between the two festival areas and soak up the very different atmospheres.

We found ourselves smiling when we came across The Kindred Café, which we had first found at Bearded Theory Festival earlier in the year.  Our daughter recognised the play tent straight away and loved playing there, mainly chasing bubbles across the field with the little boy whose family run it.  The cafe does some lovely waffles and pasta we had several cuppas there too whilst chatting to cafe owner, Lisa Igo. 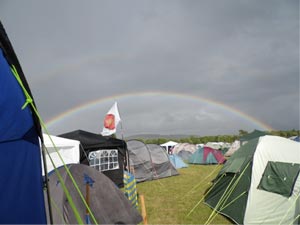 As the saying goes…… every cloud has a silver lining, and following a heavy downpour that had the majority of us running to our tents, we were treated to the most beautiful rainbow in the Yorkshire skies, that was quite magical. 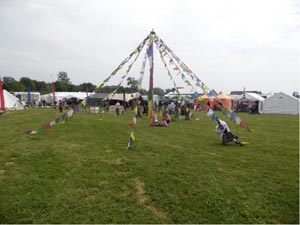 There was a charming Maypole in the acoustic area, with some wonderful art installations and a real fire pit where we sat and chilled around in the evenings chatting to the folk that stopped there.  The site offers some beautiful sunsets and skies from there.

The kids area had all sorts of circus skills going on – little kids trying to climb on stilts would fall off and do it over and over again until they finally mastered it, eventually wobbling off across the field in triumph.  I joined in the adults and kids hula hooping around the maypole, and there was face painting, water zorbing, a gyroscope (not for the faint hearted!), it’s a knock-out, stone balancing and also other workshops going on.  There was also a fabulous interactive story tent called ‘Walk the Lines’ where stories were acted out but our 2 year old wouldn’t sit still long enough for us to fully enjoy that one.

One teeny thing I feel was missing in the kids area was a bit of glitter and glue, maybe some art & crafts activities for the kids wouldn’t have gone amiss there.

We had a really great time at Willowman Festival.  This is a lovely small, relaxed and family friendly festival and the organisers have pledged not to allow it to get too big.  Willowman has definitely made it into to our 2014 list, we also stumbled across a great kids’ play park on the drive out of site which we’ll be trying out next year.

This one gets our Murphy family thumbs up!

(Note: Joanne was not given free tickets in exchange for this review) 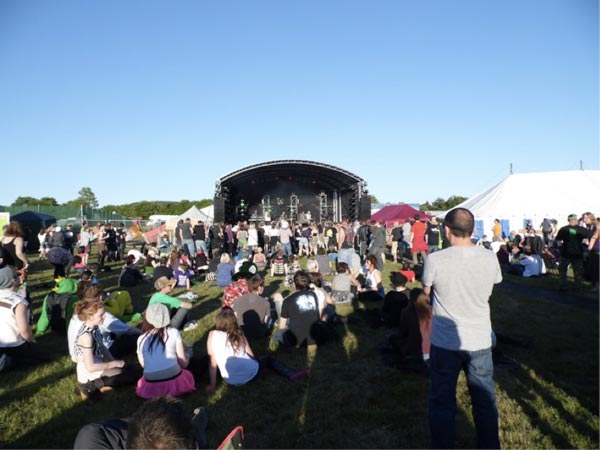 Joanne’s photos from Willowman 2013 can be found on our Facebook Page.

Willowman 2013 was held at Hillside Rural Activities Park, Knayton, Thirsk.  For more information about the Willowman Festival from a family perspective, please see our Willowman Factsheet.