So even though I live very close and have passed the wonderful Glan Usk Park many times, 2012 was the first time we had ventured into Greenman itself.

We, the family (made up of myself, James the only-been-13-for-a-week-so-don’t-shout-Teenager, Sam the wonderfully interesting 11 year old and my sister who had travelled up from her ‘normal’ life in London to stay with us for the summer) and I, packed up and were ready to go on the Thursday but as the heavens opened and the thought of pitching a tent in the mud became a real possibility, we decided to do a non-camping-weekend away. We met up with lots of friends inside, most of them were treating it as their only holiday this year, some were working hard as stewards and all were having a great time.

Even with our trips back and forth to Greenman, we had a blast and didn’t feel like we were missing out. The whole set up within a country estate meant that we never felt the presence of a big fence or heavy handed security. The only real issue with being inside Glanusk was that it is far from a flat site and with the mud, it was treacherous for the buggies and trolleys that took up residence around the foot of the hill at the main Mountain Stage arena.

There were so many highlights that trying to decide what to write about was harder than I had imagined, so I asked everyone I was with at Greenman with to sum it up in the smallest amount of words possible! The gang of toddlers and under 5’s all said the same things: “fun, muddy, hilly, long and great”. The older kids were all on a mission to say what they wanted with as few syllables as possible, I think Sam won with “cool”. The two teenagers found it even harder to sum up Greenman, one wanted to explain how a hydrogen fuel cell worked after spending all day in Einstein’s Garden and the the other one wanted to tell me all about the Zombie Science lecture in the Omni Tent and both of them were gushing about Ghostpoet and Scritti Politti.  Without doubt all the adults were on the same wavelength, with everyone loving it – apart from the hills and mud!

The Future Generations area that catered for the younger kids and those wanting to do more arts and crafts based activities was unfortunately located right next to the main stage (also one of the muddiest and hardest to negotiate areas) so the noise was a problem for the little ones, but it did mean that some parents could see some music while not being far from the glittery sticky-ness ! There were plenty of food and drink traders around that area too which was great for the older ones. We all headed to the main stage to dance along to Dexy’s and Van Morrison, but found that space was at a premium on the banked terraces so once we had a spot we tried to keep it all weekend!

During the wettest days of the festival we struggled to find places to shelter but the Cinema and Literature tents became a refuge for many families, we even managed to have a picnic and a kip in the Cinema without any problems! There is a real need at Greenman to give over some ’empty’ spaces to sheltering from the rain, maybe next year it will be bone dry. One or two of our sheltering from the rain moments lead to great discoveries, like Gavin Osborn and his comedy songs, the vintage British Film Institute films in the Cinema and Cakehole Presley on the tiny solar powered stage in the middle of Einstein’s Garden.

I think what Greenman does really well is to not try to please everyone all of the time, the quiet moments lead to some wonderful sights of gangs of kids trying to dam a stream, teams of little girls running around the inflatable elephant by the pond and many “look at the view” conversations with friends who had travelled from far away to experience it all. We did feel, for about 10 minutes each day, that Greenman was an exclusive London festival happening in Wales, with little reference to the local music scene or language, but after we were distracted by something to watch like the ‘Green and Pleasant Land’ theatre troop or the amazing Greenman sculpture in the middle of the site, we soon forgave them for it!

All in all, Greenman is a great destination for families of all shapes and sizes, with all manner of needs, but remember the wheels for the little ones, even some of the bigger ones needed help with the trek from the campsite to the main stages, but next time they can go and camp with their friends and try it all out for themselves!! 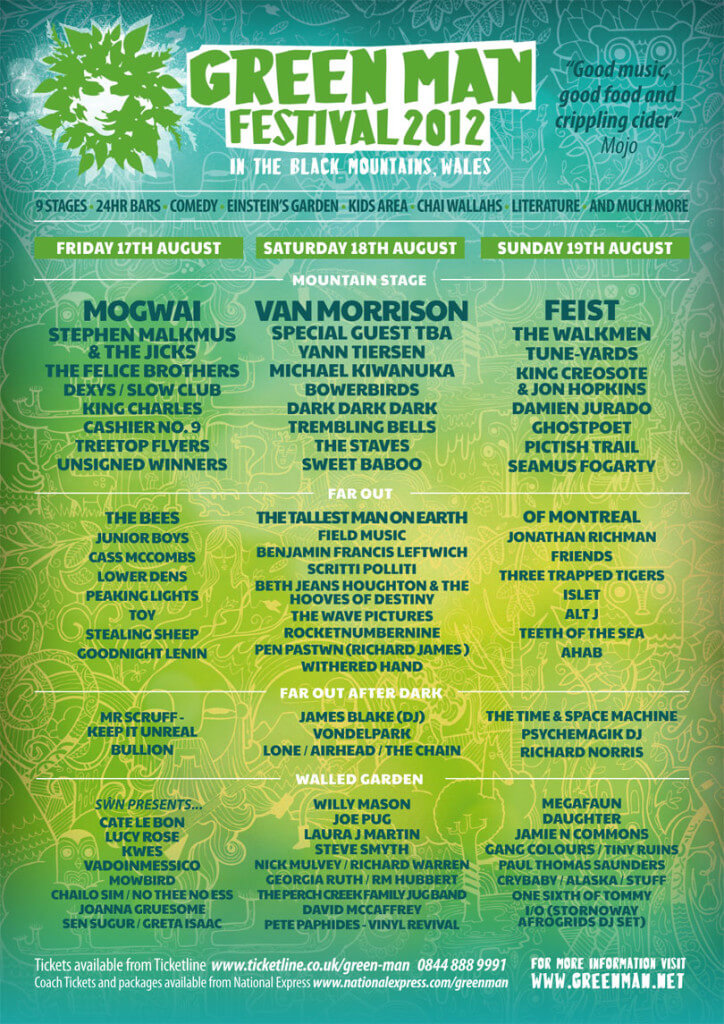