A parent’s review of Moe’s Bee Crèche at Shambala 2012.

This was the first year that Moe had run the Bee Crèche at Shambala Festival, and I hope it’s not the last.

We have three children – a 5 year old and 2 year old twins. Even at a festival where there’s lots to occupy them everyday life is incredibly tiring, so given the chance for three hours off we grabbed it eagerly.

We went to have a look round the crèche on the Friday morning – we were allowed to take the children in and to see how we felt about it. 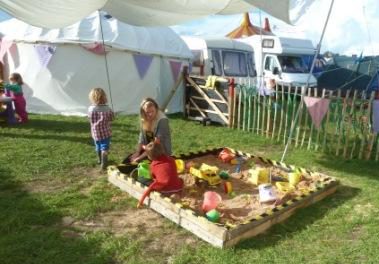 There were four tents housing a variety of toys, some outside toys and a sandpit. There was a large tent for craft activities, a musical tent with instruments, another one with general toys and one full of books and cushions for reading – as facilities go it was great, the staff were extremely welcoming and friendly (and dressed as bees!) and the children didn’t want to leave. So we filled in the paperwork and booked them in for a session later that evening at 5pm.

Apart from the very reasonable rate of £6 an hour, and the fact that we were given three hours off the exhausting childcare – we were at a festival! Three whole hours of festival fun, child free. I felt I had been given a golden ticket. I admit the first day we put them in I couldn’t relax and checked my phone every five minutes. But we enjoyed the time – we went for some food together, played some crazy golf, watched a bit of Billy Bragg, and danced at a mobile rave. The three hours were quickly over. 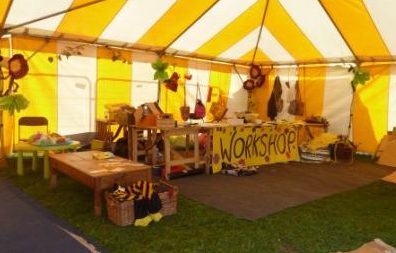 My five year old ran out with a woollen bee dangling from a string. “Look what I made!” she grinned excitedly. One of the twins was playing a small pink ukulele like a guitar and the other was in another tent playing with a train. We actually had to go in and drag them out.

The next morning, at the kids’ field, “When can we go back to the Bee Nursery?” my five year old kept asking. We actually had to promise her she was going back later, and when the time came to drop them off they ran inside. This time we were ready with plans and we headed off for a blissful hour or two at Shambala Springs – the hot tubs by the lake where you can relax with a cocktail. Something I never thought I would be able to do at a festival but thanks to Moe and her bees we could attempt the impossible.

A relaxing time at a festival with children? Oh yes. Thank you so much Moe, we’ll be back next year.

For more information about Shambala see our festival factsheet for families.  We also have reviews of Shambala 2011 and 2012 from other families. 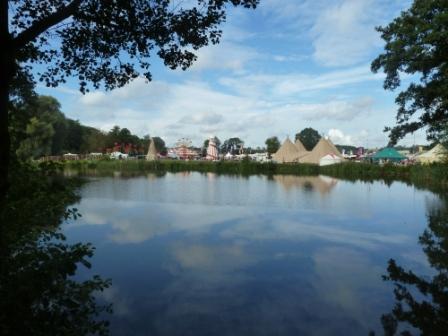 10 thoughts on “The Bee Crèche at Shambala”