Starry skies is a little hard to define. Running from Wednesday to Sunday it’s more of a mini family holiday than a weekend music festival and while there is some live music that isn’t the focus.

Actually there is no pre determined focus. Starry skies presents you with lush grassy fields, shady woodlands and a smallish program of activities. What you do with them is up to you.

People get comfy at Starry Skies. There is no dragging your stuff half a mile to hunt out a space here. We had to queue in our car for about 45 minutes on the way in but once on site we were able to drive right up to the camp site and unload.

We were in the Valley View camping field, which was quite busy near the main area. We drove a bit further down and found a spot with a gorgeous view of the mountains and enough space to spread out.

There was also a separate camper van field, a second tent field and a glamping area. On the way home we were able to fetch the car and park right next to our tent to load up.

I was initially very impressed with the toilets on site, the type you get at a nice wedding with proper sinks for hand washing.

Unfortunately they didn’t entirely live up to their promise as the set nearest us was plagued with issues, having to be shut several times. This made for quite a long walk to the other set, although there was still rarely much of a queue. There were showers in all the camping areas, these had short queues in the morning but otherwise seemed quite nice. 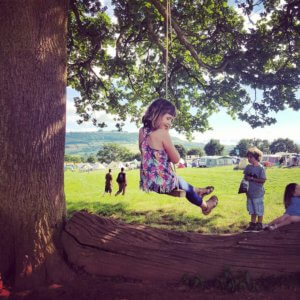 Starry skies is a lot smaller than many other family festivals and the program of events wasn’t so packed either. The beauty of this was that there was no need to really plan your day.

On two mornings we made sure to get six year old Evelyn to forest school and if you wanted a slot on the popular farm tours you did have to get there early.

But otherwise we often just drifted. Evelyn joined in with hammering together dens and tree houses in the woods, whizzing along the zip wire, and abseiling down a huge oak tree at the centre of the site.

I had more mixed feelings about her love of the cinema tent though. I would have preferred a good break from screen time but they showed several of her all time favourite films (How To Train Your Dragon and Labyrinth) so it was hard to drag her away.

Three year old Martha could have spent the entire weekend in the mud kitchen or sand pit. She was very excited to tell me how she had been to space with the DragonBird theater group who did interactive shows twice a day.

The appearance of the giant water slide on Friday caused much excitement across the entire site. Evelyn loved it despite queuing for over an hour in the rain for her turn. Martha wasn’t so keen to join in and neither were most of the adults but top marks went to the man who threw himself down it at speed in a well soaped rain poncho.

There was always something for the kids to do, from crafts to climbing to simply going for a walk in the woods or having a kick about on the field. It was often the unstructured down time that they loved the most.

Our girls quickly made friends and were happy just running around the campsite with them or sharing the few toys they had all brought. This is perhaps one of the things that makes Starry Skies such a good option for groups of families.

There isn’t much in the way of adult entertainment and even quite young children can safely run off with minimal supervision. So there is plenty of opportunity to catch up with friends or sit around a campfire. A few more things for the grown ups would have been nice. But then again, how often do you get to sit in the sun reading your book in the summer holidays?

In the evenings we sang around the campfire or found a spot in the bar to listen to a band. On the final night we let the girls go off to the cinema tent with their friends. We sat out on the grass until it was time to follow Cirque Bijou and their glowing umbrellas around the site.

The options for buying food were limited but high quality at Starry Skies.

There were two cafes each with a couple of different options each day. the largest of these had a big covered seating area and did a good range of cakes and other sweet treats too.

Martha and I especially liked the Beef Brisket from the Green Goat cafe. Adult portions were around £6-7 And Children’s about £4.

The wood fired pizzas started at £6. They were very popular, with gluten free and vegan versions. Unless you were quite picky you could probably eat very well from the cafes for the whole festival.

There is a well stocked campsite shop and with the ease and space of the campsite we, like a lot of people, saved money by cooking some of our meals at our tent.

The bar took card payments, handy as there was no cash machine on site. A pint of beer or cider was around £4.50.

Apart from these, and the breakfast cafe in the glamping area, there were no other shops and no fair ground rides to pay for either. In fact the only thing we could be pestered to buy was ice cream and we were happy to go along with that as it was really, really good ice cream! 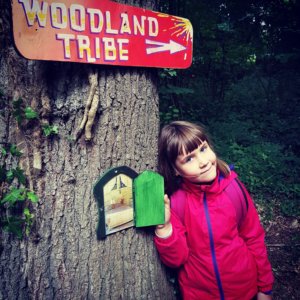 In fact one of the things that struck me about Starry Skies was what good value it was. At a little under £400 for a family of four it certainly isn’t cheap. Consider it a holiday and compare that to a peak season four night break at a cabin in the woods type holiday park and it starts to look like a bargain. All the more so with activities from morning till night all included in the price.

Starry Skies could be a long weekend festival, a family holiday, a reunion of old friends or a dozen other things. For us it was an escape from the real world and our busy everyday lives. A chance to sit on the grass and simply look at the view. A chance to let go of our 21st century need to be constantly watchful of our children and to let them run off into the woods with their friends.

This wasn’t just giving them a glimpse of the childhood freedoms we enjoyed, it was a better a version of that childhood. One with fairy doors and glowing umbrellas, giant insects and even bigger water slides. Where your parents take you to a rave and new friends are everywhere.

Where, on the last night at least, you really could gaze up at a starry sky and make a wish on a shooting star. The girls wouldn’t tell me their wishes, but they may well have been to never leave. 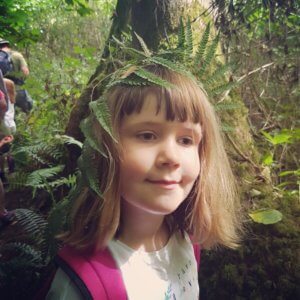 One thought on “Starry Skies 2016 Review”