We were all happy to be back at Chilled in a Field, one of our family’s favourite festivals. 2019 was the festival’s fourth time at Bentley, and it’s a great venue. 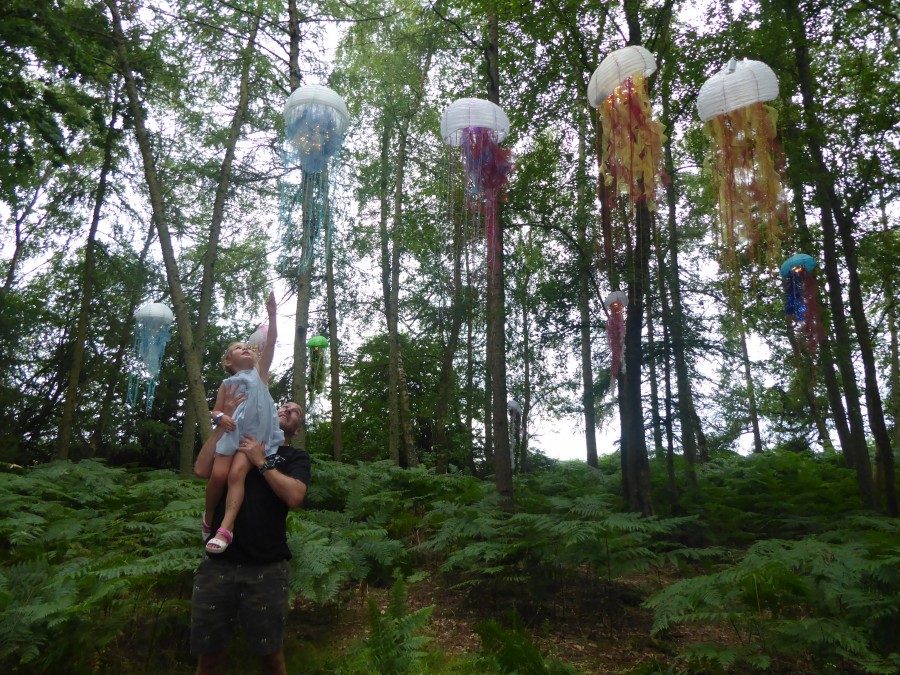 The site is incredibly beautiful. Some people were camping in the woods themselves. There were footpaths out across the fields and through more woods.

The festival is now so familiar to our children that they are constantly running off on their own. At 12 and 9, they are old enough at a festival as small as this to go off together without us. It’s a great way for them to explore their independence in a safe environment.

The Woodlands were definitely the place to be during the festival. The DJs had moved out there and at most times of the day there was decent music on and people dancing.

I made sure I picked up the Silent Disco headphones early as I missed it last year. And I’m so glad this time I made it there. I went out on the Saturday night for an hour and there were two separate stages in the woods playing two channels.

The technology had improved since I last went to a silent disco – I loved how the headphones glowed green or blue so you could tell who was dancing to the same tune. While I was there one channel was DnB and the other was Hard Trance, and I was happy with either.

It’s rare to find a decent woodland rave these days so it was definitely worth staying up for. It also meant that everyone else could get some sleep.

There’s a lovely little miniature train you can ride round the site for £2. If you’re very lucky you’ll get the train with little dog Fudge riding on it as we did. If you camp next to the miniature train line at the festival, please note that you are expected to wave at the train as it goes past! 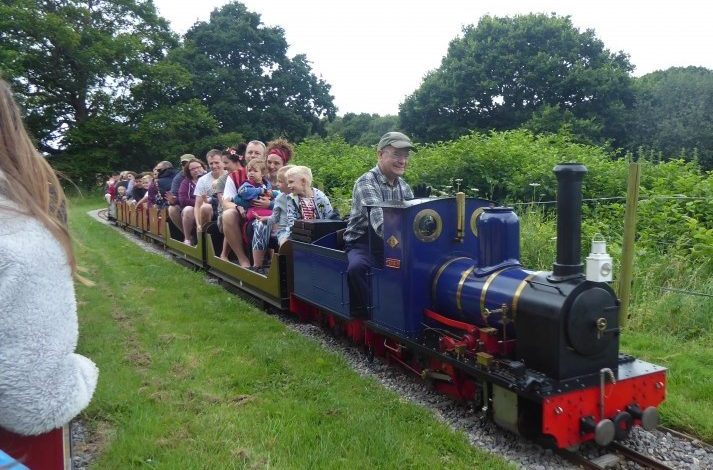 Branching Out Adventures had opened a few more attractions since last year. They have added the Lolo rope course, which is a course on the ground for 3-5 year olds. It looked very cute and cost £7. The Low Rope (6-12 year olds) was £15 and unless they’re 12 an adult has to go with them. The High Ropes are £17, and again under 12s need an adult. There are also cargo nets, a giant swing and a climbing wall.

Staying at this venue for three days has started to become a lot more expensive if you have kids that love climbing! We dealt with this by saying they could pick two things they wanted to do, and did one on Saturday and one on Sunday.

We all loved the activities we tried. I had a go on the giant swing myself as I had never been on one before. It was a brilliant activity to do with the children; it helped with their confidence and we screamed and laughed together.

My children were old enough to do the high ropes course which is a lot of climbing and exercise, so I was happy for them to go. You might want to budget for at least one of the ropes courses or you will be badgered about it all weekend.

Wonderland were back with silly games and a glitter shower.

In what is becoming a yearly family tradition, the girls all challenged me to glitter wrestling. The festival wouldn’t be the same without this incredibly silly game. Rolling around in glitter trying to pull each other’s socks off is something you can’t do without laughing. 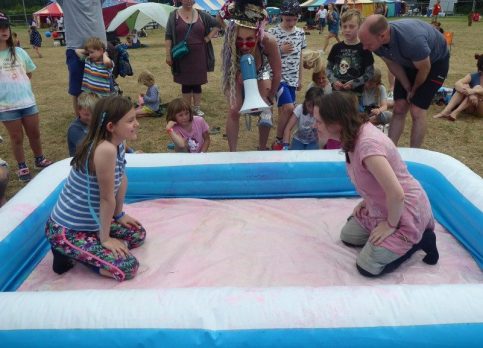 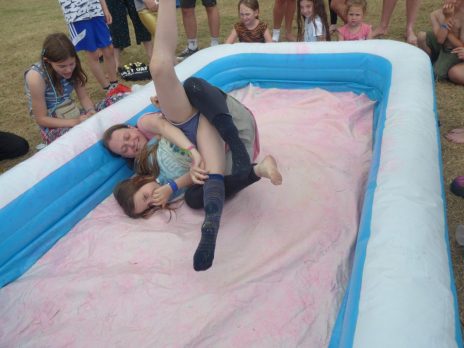 There were some wandering performers too, and one of my daughters ended up in some kind of sword fight with cucumbers.

Rhubarb Theatre were performing a piece called The Bombardiers in the woods, where they ran around being parts of a plane. We saw their show last year and loved it so we made sure to catch them again. They didn’t disappoint with their mix of mime, puppetry and silliness.

New to the festival was the Storytelling Tent deep in the woods. It was magical for the children to get their bedtime story in a bell tent surrounded by trees and butterflies. 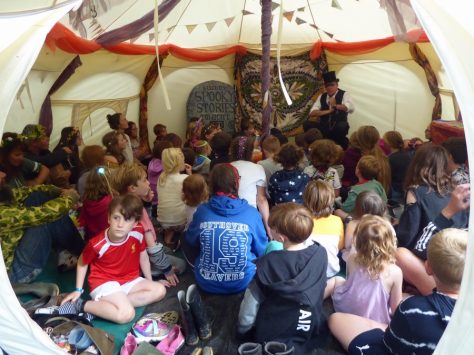 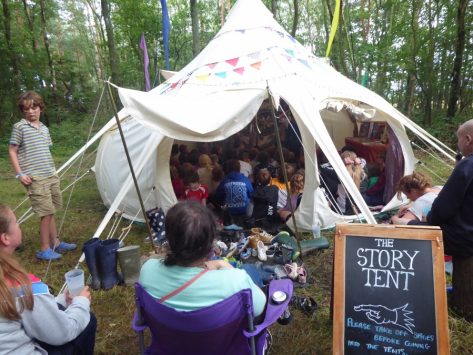 The storytelling tent was right next to the Woodland Stage so there were always a few parents dancing around in the space between them. I was one of the them! It was also near the Woodland Bar. What more could you want?

Despite it being such a small festival there was always lots going on for the children and I never heard them say they were bored.

Kids Kitchen ran a healthy cooking workshop that all ages enjoyed doing. There were also science demonstrations and lots of arts and crafts. 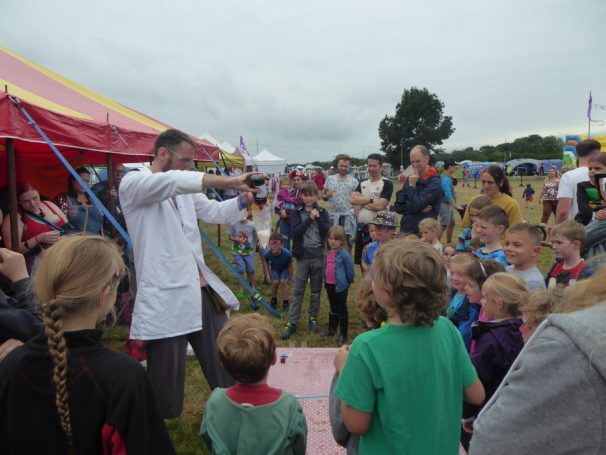 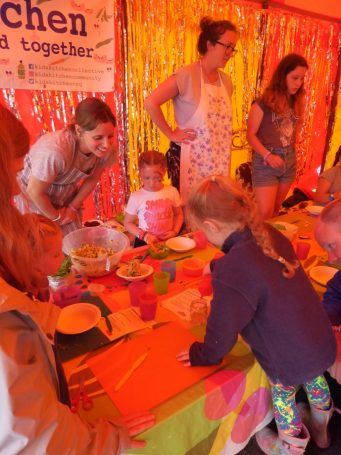 The girls particularly loved the ‘flying’ workshop. They were attached to the harness and wires that are used to make people fly in the theatre. I’ve never seen this offered at a festival before and it was fantastic fun. They learned how to do somersaults and fly like superman!

There was a large toddler tent for the small ones, with plenty of toys to occupy them.

There was another large tent with games and toys available for free play. My children mostly wanted to be in the teenager tent which had the addition of a table football table and a pool table. 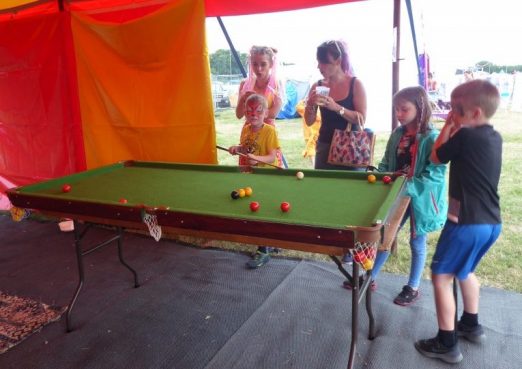 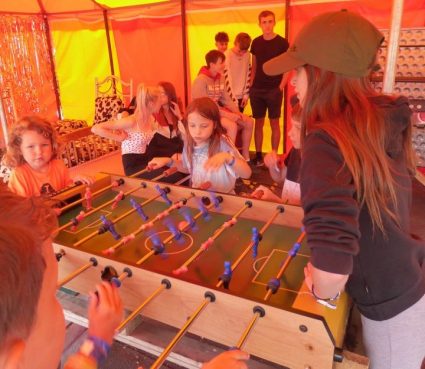 These two things kept the children away from the video games table which was an amazing thing to see. But they made a lot of friends and had their own festival good times.

One of the best things about Chilled in a Field has to be that you can watch the main stage from the sand pit.

The only small criticism I would have of Chilled this year, is that there wasn’t quite enough entertainment for adults during the day in the main field. The main stage volume was overpowering, so when there were workshops for adults taking place in other tents they were difficult to follow.

The bar no longer had a DJ so if you didn’t like the music from the main stage there wasn’t anything else to listen to. The organisers had mentioned adding some other entertainment to replace it so it will be interesting to see what they have lined up for next year.

The woodlands however, were always jumping and a great place for a dance.

We love the food at Chilled – particularly all the home cooked options on offer in Kaleidoscope Kitchen. We always make sure we get there early for the Sunday roast although the queue never lasts that long. Olly’s Fish Shack were back again with some top quality fish and chips.

My favourite festival meal of 2019 has to be the vegan burger I had from Tiger Eats Carrots. I’m not vegan and I don’t generally like burgers so they properly impressed me!

I had the “Bhaji Boy” (£7.50 or £10 with chips) which was a large onion bhaji with coriander, raita and mango chutney in a bun! It doesn’t sound like it’ll work but it tasted sublime. I will definitely try some of the other options if I see them again. 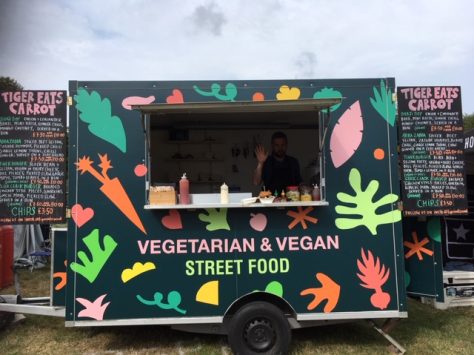 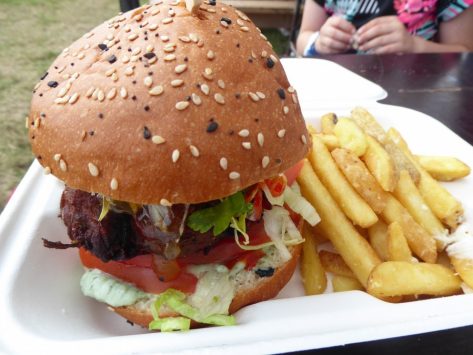 The drinks choices were good – lots of real ale and different types of cider all for £4 a pint. They also offered decent cocktails and a choice of wines.

Chilled in a Field has always been made with families in mind, and has a real community feel. There’s no bad behaviour and the sound goes off at 10:30pm. The party in the woods went on until 2am. But as it was a silent disco, those staying back at the tent with their kids were still able to sleep.

This is not a crazy party festival. But it is one where you can dance late and enjoy yourself if you want to. There are no long distances to walk and plenty for the kids to do. The whole family can relax and simply enjoy being together, surrounded by music and nature. 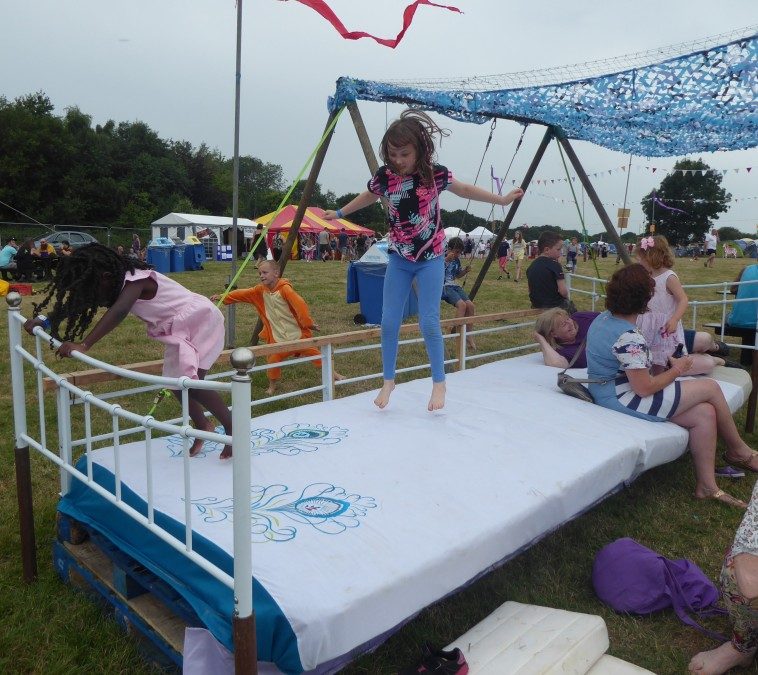 Tickets for 2020 are on sale from the Chilled in a Field website now!

For more on Chilled in a Field see our family friendly factsheet.