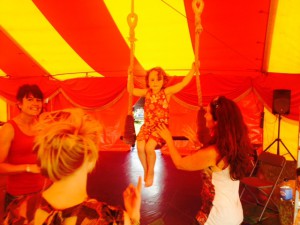 Very much a music festival there’s lots of variety with a mix of main stream, rock and punk.

For a relatively small festival Guilfest try to pack something in for everyone. It’s one of the few festivals you can hear brutal bass lines and crushing riffs of future punk band Black Futures in the Big Cheese Cave followed swiftly on the main stage by a very family friendly, heavily pregnant Sam Bailey (of X Factor Fame).

Saturday saw a strange breed of ‘Jedward‘ fans take on the die-hard spiky haired rockers in a bit of a music mash up. Jedward fans definitely won the prize for being the most unique gang there.

For us the best of the weekend were Norman Jay (we love you!) who got the whole festival on their feet on Sunday with top tunes that all the family enjoyed. And on Friday, undoubtedly the top band of the weekend was The Boom Town Rats. Not something I would normally watch but one of the best live acts we’ve had the pleasure of in a long time. So much energy and Bob Geldof was a legend on stage. Only down side was my 4 year old mastered the ‘F’ word within the first 10 minutes of their set. Guess that’s Rock n Roll!

Heaps of variety and something for everyone. 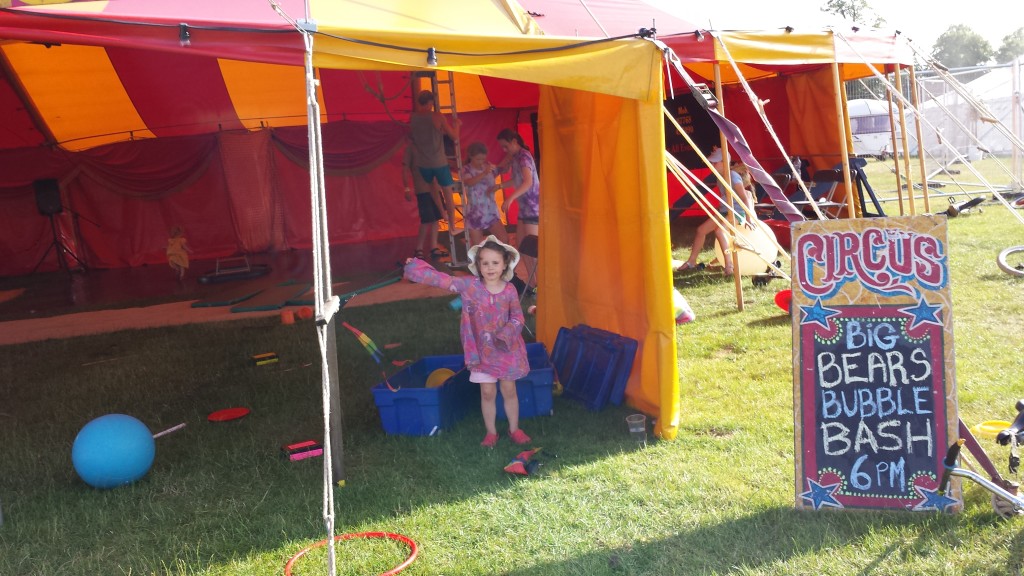 It’s was great to see the familiar faces from the Big Top Mania crew running the kids area again. My kids have loved their shows and all the crazy stuff you can enjoy at Camp Bestival and many other great outdoor events. Lots of circus skills, great craft tent, crazy bikes, and a cool van kids are allowed to paint all over.

We had a fab trapeze lesson with some of the team there. Thanks so much for taking the time to teach us some tricks. 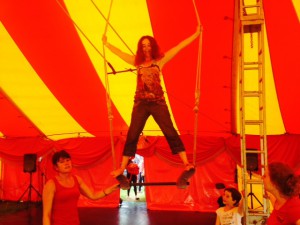 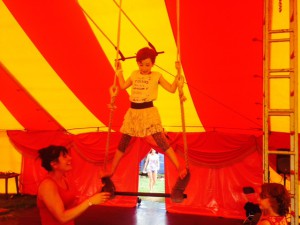 The addition of kids fairground rides and bungee trampolines (£5 a go) is my only criticism of the great kids area. Yes, you can say no to the kids to these costly extras (which I did) but they still moan and you end up feeling a bit tight. Luckily they had kept all these paid for rides at one end so you could avoid them. But for me, the draw of a kids field at a festival is that I can let the kids run free and enjoy everything without having to ask for money.

After a crushing year for Guilfest in 2012 with poor ticket sales and dreadful weather it was great to see them back after a year out. I was pleased to see the toilets and facilities improved immensely. The festival did seem quiet at times with perhaps a few too many food stalls but from a visitors perspective this was great. No waiting and plenty of choice including a selection of quality establishments (alongside the regular greasy fairground food stalls). It was nice to see a few local companies serving up average priced festival food, and the kids’ slush puppies (£2) were perfect with such hot weather. Ice creams £2.50 and a pint £4.50.

Toilets were clean and the biggest improvement of the festival for me was the disappearance of the hard plastic non-recyclable glasses at the bar. Dreadfully wasteful and also quite dangerous when they get crushed in to the ground. The site was kept very clean and felt safe for kids to wander (perhaps not round the heavily loaded dance tent after dark which seemed overrun with local teenagers – or am I just being old?)

Recycling could have been more clearly marked but it did seem they were making an effort. I am told that Surrey Council sort their waste after it goes in the bins but who knows? Bigger signs would be great. 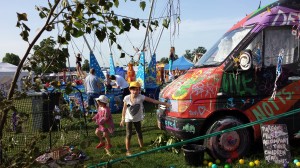 Overall the safety at Guilfest was good. Plenty of security which is probably needed due to its location right in Guilford and a large number of teenagers on site. They were quite strict on searches going in to the site and we did come across some young girls trying to smuggle cans of larger in to the camp site as they had been told by staff under age people would have alcohol removed.

Sadly, we left the festival early as had to be somewhere but it was still very hot and on more than one occasion we had seen dogs locked in cars in the car park.