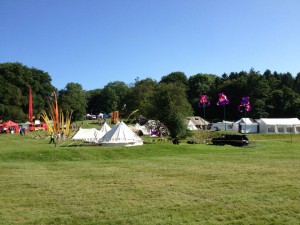 I was performing my lullabies in Angel Gardens but it was also our first festival as a family with our 3 young children, 6, nearly 4 & 21mths

As we were part of the Angel Gardens Crew, we camped in their designated area but the family camping area for visitors was cleverly and thoughtfully positioned to the back of the main stage and much quieter (don’t get me wrong there is still music!) and near the main entrance so I expect not too far to transport stuff. Plus you could hire some rather marvellous canvas wheel barrows to move your gear about – genius idea!

Blissfields was quite a small, boutique festival and an excellent first festival for a family with young kids. The Angel Gardens area was a designated children’s area and beautifully decked out with bell tents  (click here for some great pics)

It was helped along by sunshine but real attention to detail made this a special place for little ones – more bunting that you can shake a stick at, fairy lights, toadstools and lots of activities, some free, some not. Each bell tent hosted different activities ranging from crafts such as stone and glass painting to one simply full of toys and a soft area for babies. Face painting and hair braiding seemed to attracted a lot of teenage girls too. I sang my Laid Back Lullabies twice a day, which, though competing with the main stage at times, hopefully gave parents and little ones some respite from the pumping music.   The Angel Gardens area closed with bedtime story and a fire show.

Outside of Angel Gardens there was a hilarious Sports Day which we all absolutely loved with some crazy games including balloon fencing and marshmallow eating contests.

There are LOUD places with very little time to escape the noise. It was a bit of a sensory overload by the end of it all. We very foolishly forgot earplugs. Kids managed to sleep through but all were pretty exhausted when we left.  Definitely need Ear defenders for little ones but unfortunately my toddler wouldn’t let them near him!  Washing up facilities for camping would have really helped too but appreciate not easy to set up in a field!

We’ve not been to a big festival yet though I’m off to Latitude next week so we’ll see…  but my sense was it was good to start small and we were really impressed by how well Blissfields had been organised and the organisers were there and involved.  I spotted the organiser (Paul, I think) having a little chat with my 3 year old which I just thought was lovely that he bothered to take the time to stop and have a little chat! It was that kind of attention to detail that made it so good.

The site was quite small and weather incredibly fortuitous so it was easy to get about. Quality of food & drink available was pretty good (with nice attention to detail on the appearance of all the vans and stalls) though we did spend a small fortune, feeding a family of 5 and I would definitely take more supplies from home next time.  Toilets were well maintained and I paid for the Posh Wash showers which for me were piping hot.
I had mobile signal but no 3G (Vodafone) but husband had 3G on Orange.

I felt surprisingly safe and a lot less worried about the children than anticipated. I think due to a few things – it’s a relatively small festival, security on the gates was strict so you were stopped going in and out so I’d hope they’d have stopped a child too. Angel Gardens crew were all highly vigilant around small children so all in all felt quite relaxed. It’s quite a smart festival. The guests were all what I would call ‘respectable folk’ and there for the music.

Aside from Angel Gardens and having the chance to perform and see the proud faces of my girls, the big red tea bus was a firm favourite – even though it was warm the kids insisted on sitting on the top deck.

Yes, I dare say we would!

More information on Blissfields can be found on our Festival Factsheet for families.