Held over 4 days with different headliners each night, this new summer festival promised to bring music and fun for all the family to Hampton Court Green on August Bank Holiday weekend.

Getting there by car was very easy.  Perhaps not quite so easy by public transport, but possible – just slow because of the location.  The festival was well organised with good signposting, helpful car park stewards and no queues to get in.  So far so good. 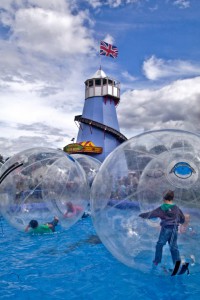 On entering, the first thing we saw was the Fairground rides and I admit that as a parent my heart sank a little – you just know this is going to cost dearly.  But I had known in advance the fairground would be there so I had budgeted for it, and the extra cost at least kept the queues down.  And this was a rare family day out, so I came feeling prepared to treat my kids.  As it turned out, the PR company gave us a couple of free ride vouchers, which was a lovely unexpected bonus.  Our girls chose the Ferris Wheel (great views), the ‘hamster’ balls on water, and the bungee trampoline – it was a big treat for them and our reward was lots of happy smiles.

As we worked our way around the small site we discovered plenty of free activities on offer, so many in fact that we didn’t quite make it to all of them!  We did spend a long time in the petting farm, milking plastic cows and chatting to the friendly staff about the long-term commitment of rabbit ownership though.  I hope they were successful in putting little one off 😉 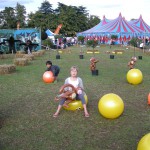 We also had a lot of fun in Henry The Ape’s Tournament area.  Hubby got volunteered for the sack race while I managed to be coerced into rolling a giant ape’s head around an obstacle course whilst wearing a monkey costume to the girl’s great amusement (why oh why do I do these things?!).  A bit of welly-wanging and space-hopper bouncing later and we moved on once more…

Next stop was the Science Museum tent.  This was good, really good. 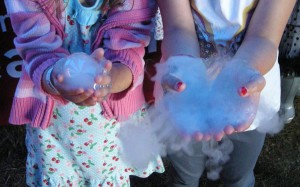 It was understandably popular so could have done with being in a bigger tent.  Kids were fascinated, holding smoky bubbles in their hands, playing with the solid/liquid gloop, doing gravity defying tricks, practising steady hand skills on the buzzing wire and shooting balloons with dry-ice rings.  We were given a great book of kitchen experiments to try at home too.  Excellent… (well, excellent on the proviso that someone else volunteers to clean up afterwards that is!) 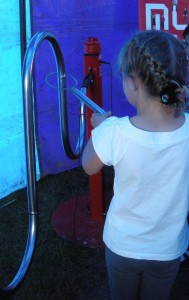 Festival favourites, Big Top Mania, were there with their Circus Skills tent and Crazy Bikes.  When I say crazy bikes, I mean crazy… these bikes are all doctored in some way with tiny wheels, opposite steering, backwards seats or some other weird and confusing customisation.  It was really entertaining watching the kids get to grips with them, but much much funnier when the dads would come along to ‘show them how it’s done’ only to fall straight off themselves!

We visited on the Sunday and there weren’t really any queues anywhere… except maybe facepainting, but even that was not as long as most of the facepainting queues I’ve seen at other festivals this summer.  Horrible Histories and Charlie and Lola were bookable shows, attracting an additional fee, which worked really well for queue management.

We had every intention of having a go at everything but got a little held up when we very unfortunately had to take shelter in the bar while a heavy shower passed over.  Again there were no queues and the staff were so friendly it seemed rude to leave too quickly! 😉

On the down side, one thing I really didn’t see the point of was the blatant corporate brand stands from companies like BT and British Gas.  It just felt like an irritating and intrusive ad-break in an otherwise enjoyable film.  I could at least see the relevance of Nintendogs and Moshi Monsters, but British Gas?  Oh purleeease!… They may as well have had a bloody service-station RAC gazebo…

The only other negative point worthy of a mention is about cost.  Personally, I thought the Jolly Day Out represented reasonable value for money.  In comparison to other similar events this year (eg. LolliBop, Apple Cart), I think the entertainment was on a par, if not better value for money.  Despite this, there has been some moaning on internet forums about it being a rip-off. 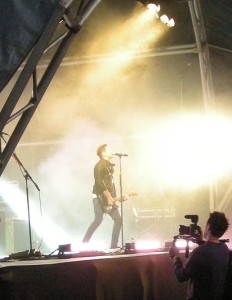 I think perhaps the problem is that costs have risen enormously for organisers, yet the public is feeling financially pinched.  There are less freebies about and people are more cautious with their spending money.

The fairground rides were on the expensive side, and some of the food outlets were higher end… but you could have spent very little, as there were also plenty of free activities and normal priced food too.

Well, normal for festivals – it’s never going to be as cheap as your local chippy… mobile catering is much harder work.  But let’s not forget the added value of seeing quality main stage headliners… standard gig tickets are usually more than the entry price to this event.

And while we’re talking headline acts, the real highlight for my family and probably 90% of the Sunday audience was of course McFly!  One family we met had even traveled over from Holland that day just to see them.  The boys were on form as they played to an adoring crowd and their cover of Tinie Tempah’s ‘Pass Out‘ seemed to take everyone by surprise.  After firing t-shirts into the squealing audience with a rocket launcher, energy levels soared and the big hits came one after the other.  Looking round at all the banners, I couldn’t help feeling that we weren’t quite their demographic, but we still had a good boogie with all the other parent chaperones around us pretending to be there for the benefit of their kids 😉 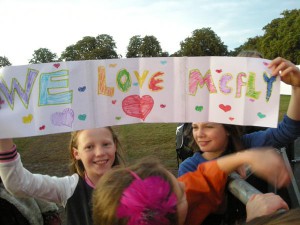 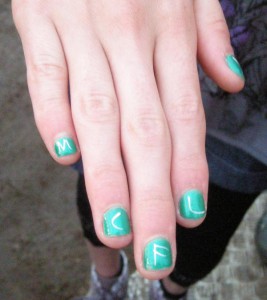 As the crowds slowly left, my starstruck 8 year old spotted a queue of kids queuing for autographs.  She begged to join them so we waited a while but some particularly aggressive and rude exchanges from the surly security guard prompted us to give up.  I don’t know how much longer those poor children (and parents) waited, but I do hope they didn’t go home disappointed too.

We got back to the car, bundled our two very tired but buzzing little bunnies into the car… and breezed out of the carpark.  Stewards again were excellent at keeping the traffic flowing.  The whole day had felt very easy and we would happily do it all again next year.  🙂 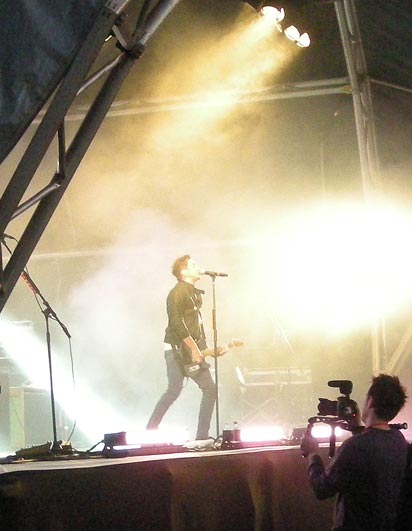 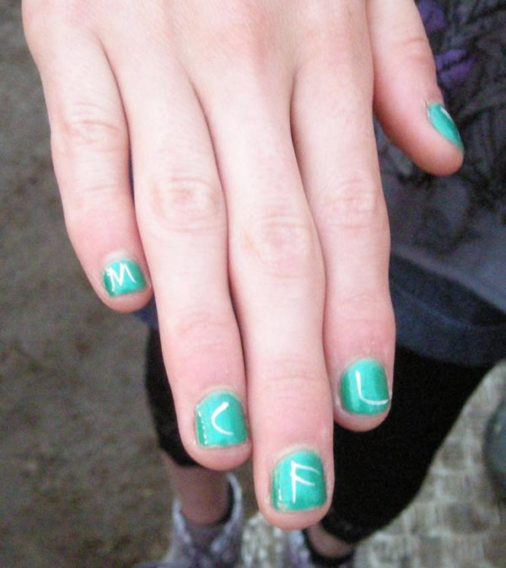 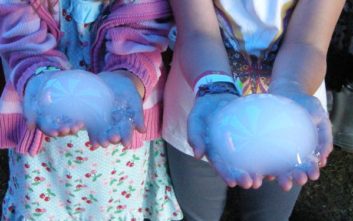 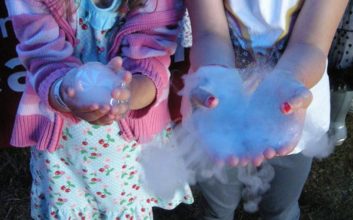 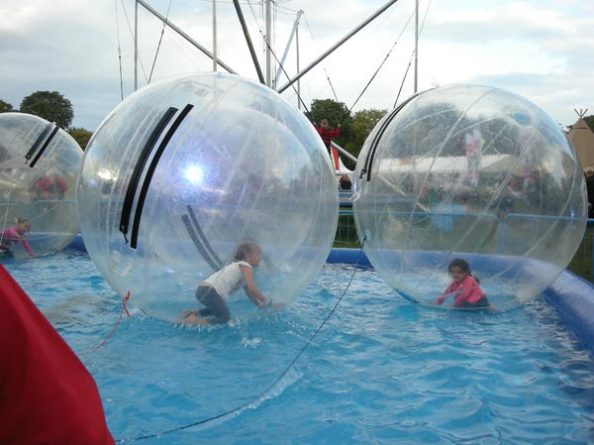 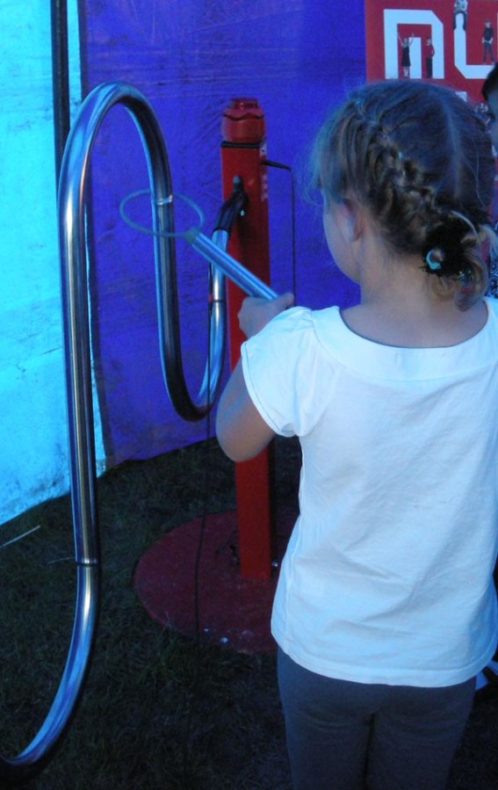 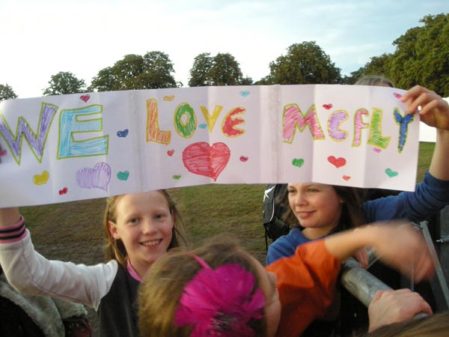 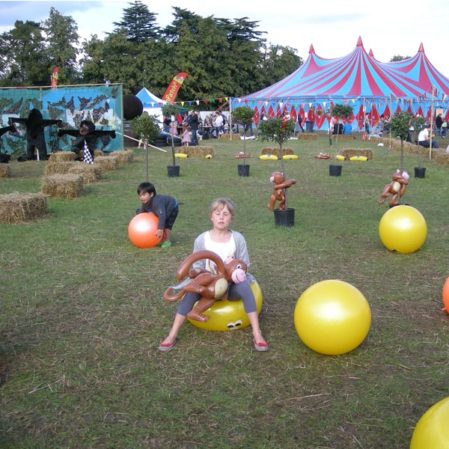 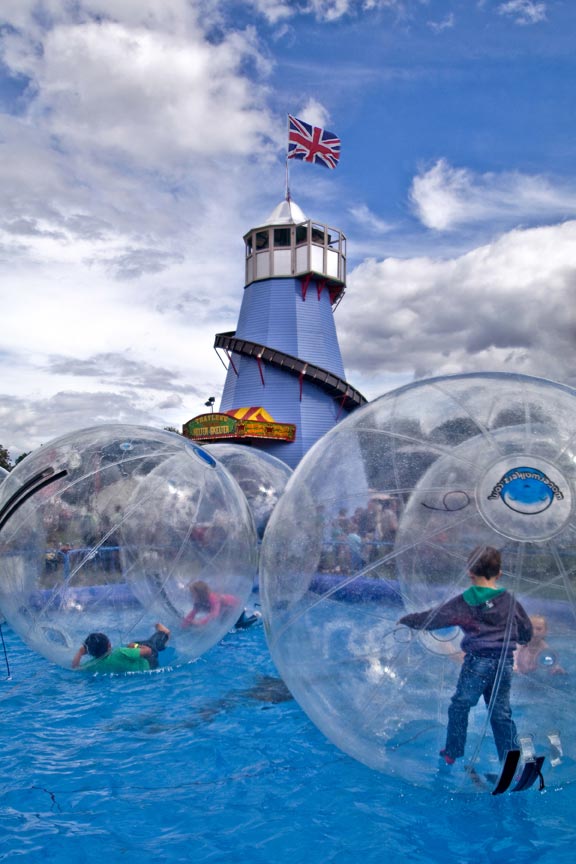