Having heard all the good reviews of this festival we were really looking forward to this one. It had moved from Croft Farm to Eastnor Castle which gave a great backdrop with the lake at the festival edge. Upon arriving I bought the organiser Lee Martin’s book ‘Hippie’ which is well worth a read, it’s just a bit of a shame more of his values aren’t portrayed in the festival. We all had a great time but it was more of a nice weekend at a festival rather than a particularly ‘festival’ experience. 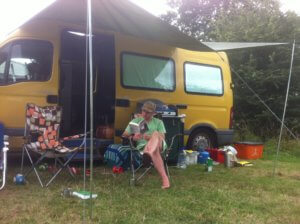 patch that was to be our home for the next three nights (we have now added levellers, no pun intended, to our list of festival essentials). There was plenty of room around us and our daughter Hazel, who very much lives in the present, commented that it was her favourite festival as she could run around with her kites and not get in the way of anyone (more on kites later). Friends of ours were having their first family festival experience and so were found camping in the family area which was very spacious, no guy ropes crossing each other or any of that nonsense here. Nice and flat, toilets nearby with Eastnor Castle in the background, what could be better? They didn’t mention any drunken disturbances and the family area seemed very friendly. Showers were close at hand and warm but due to the inevitable queues we didn’t use them. The toilets did get full on the first day but after that were regularly cleaned and stocked.

The disability access facilities is situated slap bang next to the box office and entrance while there is the opportunity to glamp it up near the lake.

It was easy enough exchanging our tickets for wristbands with no queue when we were there. You could also buy a lanyard with a timetable on but with no information about bands the £5 seemed a bit pricey.

The main site is an enclosed arena which starts letting people in from 5pm on the Thursday. At first they were letting people in with their own alcohol but his seemed to change sometime on Friday night with security demanding to check pockets and bags for alcohol with the excuse that it was to minimise waste and that the bars weren’t taking enough money. There were a few awkward looking parents downing their drinks before they could go through the barrier. 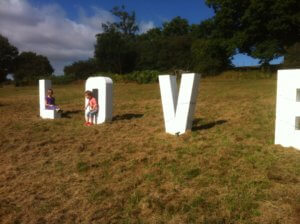 All the stages were enclosed in tents which would have been useful if there had been some rain but it was shame that the main stage wasn’t open with the lake in the background. This is perhaps due to the proximity of the other stages, but with the music and lights from the ‘Insania’ fairground rides on one side and Big Wheel behind it was tricky to sit out in the sun to watch some good music. This year the festival had introduced screens to the side of the main stage and just outside which projected images that were fuzzy and only about as big as the act itself. It also meant the main stage was quite empty and lacking in a bit of atmosphere.

However, everyone still had a great time . We enjoyed the little bits of art at the edge of the lake, there was a mermaid emerging from the lake but with the name of the festival being Lakefest we thought they might have made a bit more of the lake (in previous years at Croft Farm they had watersports that seemed popular). The three people emerging from the grass were great bits of artwork too but unfortunately by the time we came to take a photo they had been destroyed. There was a small ‘LOVE’ sign situated on the hillside opposite which at night illuminated just the ‘L’. Other space seemed to be filled with various noisy fairground rides. It was a bit disconcerting to walk around with kids brandishing toy guns – so many children had them and seemed to be another product of the fairground.

It felt like the organisers had tried to do a little bit of everything but hampered by lack of cash couldn’t do things properly. Our advice, stick to a few things and do them really well (such as the planted area with beautiful table).

Although some people we spoke to found it odd having so many dogs at a festival it must be a welcome relief for dog owners to be able to include them in their weekend away and there didn’t seem to be any problems with mess anywhere. In fact there was very little litter either and the toilets were also kept clean and stocked throughout the festival.

For those parents who like to spend a bit of time on their own at a festival there is a crèche where kids are looked after and entertained with any number of activities. 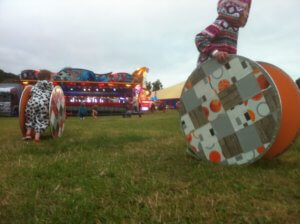 Considering the small size of the festival the choice of food on offer was good ranging from Thai noodles and Caribbean stew to pizza or a steak sandwich. Prices seemed to be reasonable too with a lot around the £6 mark and a pint was selling at £4 -£4.50 with a £1.50 charge for a reusable cup. What was a bit disappointing was the ice-cream. It’s always a bit of a treat at a festival to have an ice-cream – we are on holiday after all – and we particularly like seeing Shepherds ice-cream but we were sorely disappointed to only be offered Mr Whippy and lollies especially as we were in Herefordshire, the home of Shepherds ice-cream. 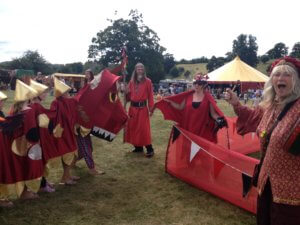 Strangely not many people arrived on the Friday morning leaving it feeling at times like a large village fete. But this is no bad thing as we love a village fete and it also meant that the kids could sit down to do some cutting and sticking. Both children made paper kites which being only paper were surprisingly effective.

Saturday was also the time for the dragon parade led by people who actually looked like they were from middle earth and there was also the chance to meet a smaller dragon (I think it was a puppet but who knows?) and a dragon story. The kids kept on coming back to the tent on Saturday and Sunday as there was clay modelling, yoga, storytelling,
rabbit making, clay modelling, skirt making and face painting – they had a blast! 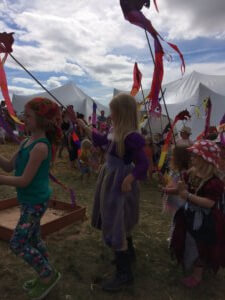 Bassett World featured heavily in the festival. It was an enclosed area devoted to enticing children into a fun world of gaudy colour under the pretence of selling the parents a product. Now I am not saying that the kids didn’t have fun colouring in happy Bassett World, dressing up and being read a story from an A4 piece of paper but the reminder that vitamins were for sale from the over smiley attendants was slightly off putting. Rather than peddling jelly sweet vitamins on families it would be great to have seen healthy eating activities being encouraged instead. Yes we didn’t need to walk in but it’s a small festival and fairly tricky to avoid.

Elsewhere there were some fantastic circus skills and shows which only exhausted our two as it was so hot (the weather was great by the way). The drumming and percussion sessions were popular and entertaining. Two jugglers strode into the big tent at one point to entertain the crowd and there were lots of other families around. 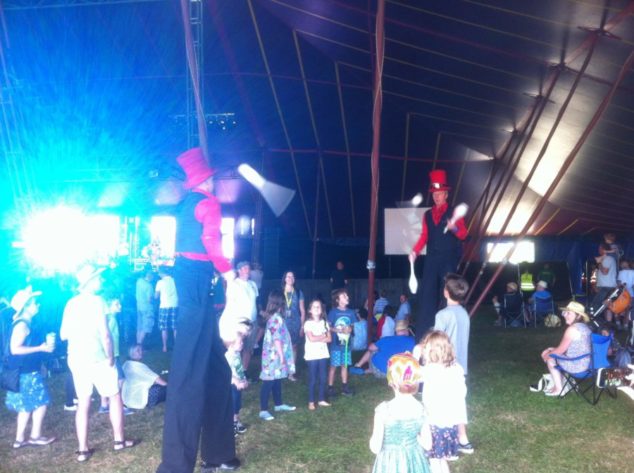 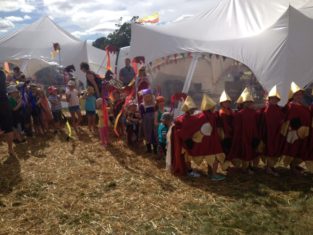 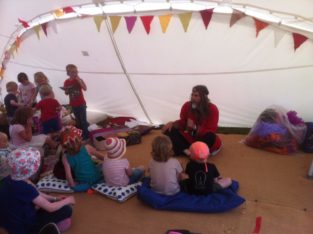 As a family we don’t think there is a better way to kick off any festival than having 3 Daft Monkeys playing. They always get the crowd going and they didn’t disappoint at Lakefest…the kids are still singing ‘Hubadillia’!

The music is fairly broad at Lakefest with the smaller tents hosting everything from techno to folk, Neo-soul to hip hop. Another music highlight for the family was Afro Celt Soundsystem who are very much a festival band –we could get within metres of the front at their gig which is a first and so Hazel and Gwilym were very excited! We also snuck through the aging ravers to catch Altern-8 a blast from the past for me and it was amusing to see ex – gurners and heads now straining under the weight of their respective five year old so they could see Mark and Chris demonstrating the need for respiratory protection in dusty environments (they wear dust masks).

With the kids happily playing around the van with their ample space to fly kites I was free to catch Big Country, Cast and later on Primal Scream, one of my favourite bands on record but as usual are slightly disappointing live as Bobby Gillespie seems unbothered by it all. It’s great though that a small festival like Lakesfest can attract some fairly big names.

On the Sunday I caught a great band at the ‘introducing’ stage – Population 7 who kept my tired and hungover mind from keeling over while the kids were happily making some lovely lanterns and colouring. It was great to have hip hop and soul alongside the rock and brit-pop that predominates on the main stages. Before we left (sadly before the Coral) we caught most of Gaz Brookfields set which was very entertaining and a good way to end our time at the site.

The craft area is reasonably large for the size of festival and Caroline decided she wanted to make a willow basket with Zoe’s willow. While this was going on the three of us went for a walk round the lovely site up to the hill opposite then back down for some more activities with the friendly kids staff and then to be greeted by happy Mum and new shopping basket. It is so nice for adults to have something interesting to experience but also for children to have the opportunity to try out real crafts (there was also making headdresses, copper work and blacksmithing in the craft area). 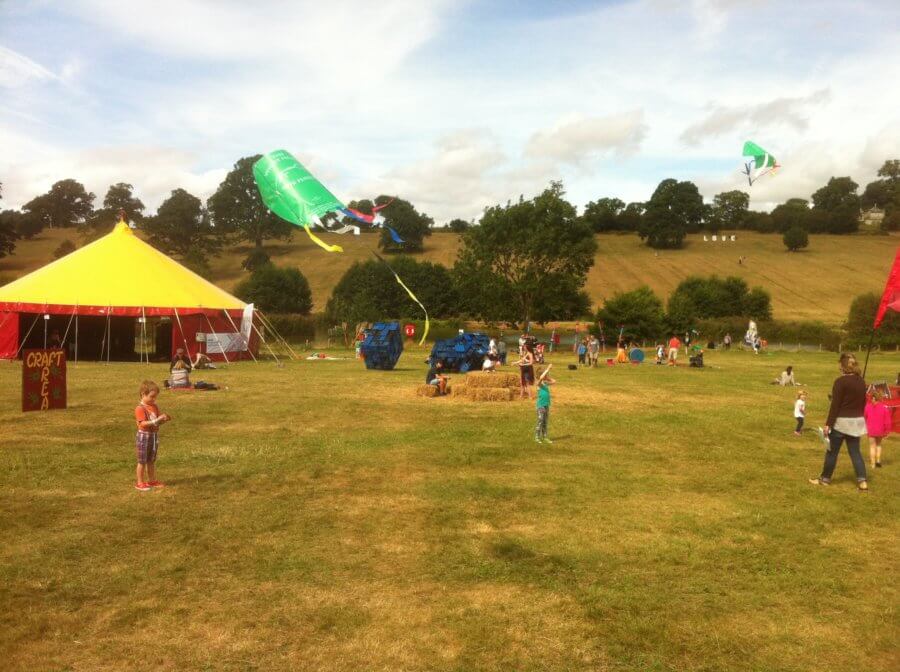 We have never before seen BMX at a festival but it somehow worked and kept us all entertained, the tricks were just stunning. Luckily neither Hazel nor Gwilym has requested a BMX for Christmas… yet!

Probably the biggest hit of the entire weekend was the kites. It was lucky it was fairly windy all weekend or it could have been a damp squib. But after trying their luck with the paper kites the kids decided to spend their pocket money on a more robust version from Peter Powell. They then spent many hours were spent running along with amazed little faces as their kites took to the sky. Thanks Lakefest for the kite memories, I had a go and didn’t want to give it back.

Lakefest is a great little festival for those unsure of taking kids or who themselves have never been to a festival especially as the line-up has always been great. We were lucky to have had great weather which always helps with the festival vibe but we did feel there was the potential to be even better – and we hope the organisers could try for a better balance between the commercial and festival side of things. Overall Laefest is fun and friendly and  would definitely suit families who want to see good music and fly kites! 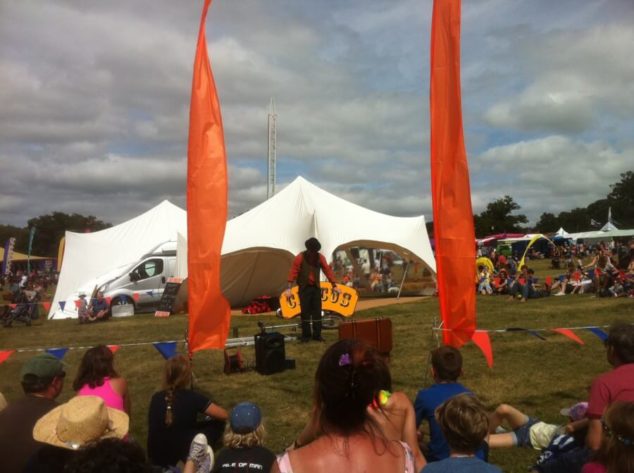 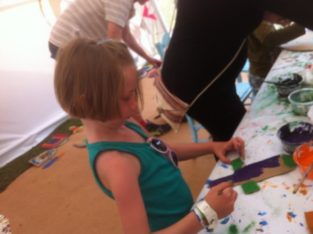 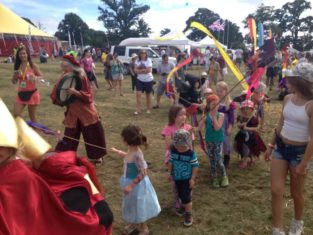 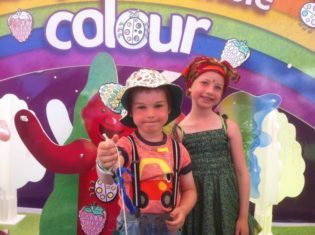 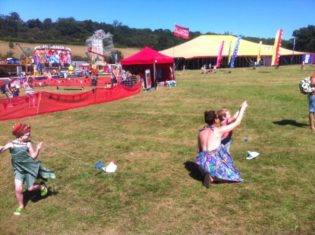 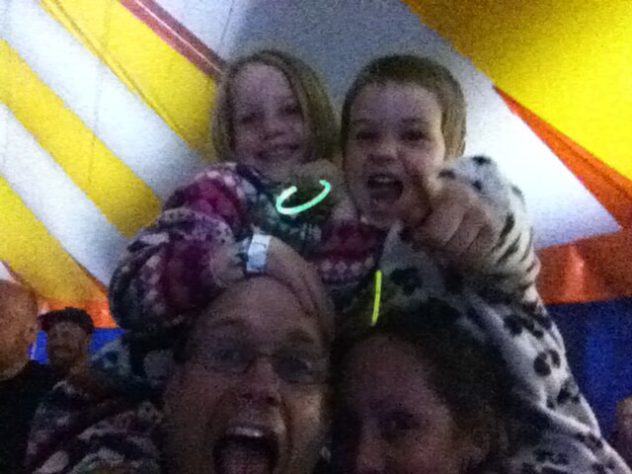 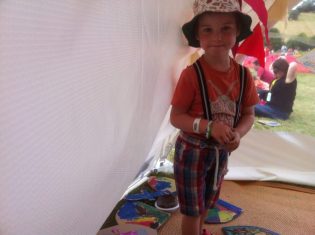 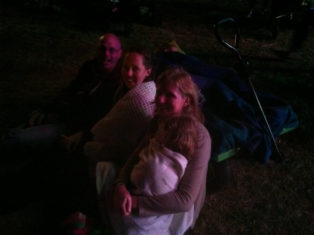 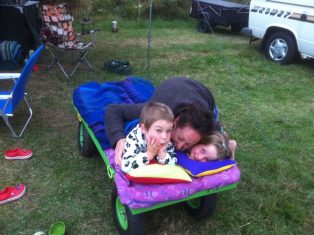